Shaddo’s body appears to be composed of pure blackness, which also manifests as a cloak. She has absolute control over it, and can extend it to attack and ensnare her opponents.

Mutants left Earth to avoid persecution, just prior the Martian invasion in the 20th Century. This exodus eventually led them to a habitable planet they named Haven.

Over time the number of mutants dwindled as more and more of the births resulted in baseline humans. Eventually, the nine remaining mutants became an elite ruling over the humans with an iron hand. Rancor was the undisputed leader of the mutants.

Soon after, the mutants were contacted by the Guardians of the Galaxy, who had just located the long-lost Haven.

Rancor and her lieutenants were suspicious of the newcomers but met with a few of them. When they discovered that other Guardians were meeting with the underground resistance, Rancor attacked them. She ordered the mutants to put down the revolting humans.

They battled the Guardians, losing two of their number, Rhodney and Blaster. Then they had to face the threat of a new Phoenix host being empowered. Realising there was little chance of victory, Rancor detonated bombs to destroy the planet. She determined that if she couldn’t rule Haven, no one could.

Rancor led the mutants to safety, while the Guardians helped the humans escape to safety on Main Frame’s world.

The search led them then to Earth. There they again came into conflict with the Guardians and Rancor battled Talon. But they were kidnapped by Doctor Doom, who forced their obedience. This caused violent resentment in Rancor, who took some time to realize she couldn’t easily kill him.

They worked for him for a while, again coming into conflict with the Guardians. At this point, Rancor used surprise to attack Doom. The battle was close at times, but ultimately the Guardians won, capturing the mutants. And while it initially appeared that Rancor had won, Doom soon rose, revealing that his body had long gone.

His brain was now kept in a cyborg body which included the adamantium  skeleton he’d taken from Logan, encasing Victor von Doom’s brain. Rancor survives the fight due to the intervention of the Guardian, Yellowjacket. She escaped Guardian custody, stealing their med-shuttle, and freeing her Lieutenants.

Learning that the Inhumans had recently been abandoned by their dictator, Loki, they took advantage by enslaving them. The mutants then loaded the Inhumans onto a spaceship they forced them to build, setting off in search of a new homeworld.

They found one, naming it Haven II. Then they set the Inhumans to work building for them.

Shaddo was pitted against Nikki, but lost. She would have killed her had Vance not interrupted her. The Guardians were eventually teleported away by Talon.

Possibly the most sadistic of Rancor’s Lieutenants. Shaddo enjoys tormenting her victims, relishing any opportunity to cause pain.

“Say you surrender, blue-boy… and I promise to kill you quickly !”

“Stop struggling, fool ! Nothing can escape my living cape of death !”

The planet which became known as Haven was originally a prison planet for super-villains from Earth, where these unwanted were abandoned to their own devices. A number of the more powerful escaped, but the others were left. When events on Earth caused the influx of new immigrants, they were completely isolated.

I’m not absolutely certain that her cloak is a part of her. But she manipulate it as though it were, and feels pain when it’s damaged. So I feel it’s a safe assumption. 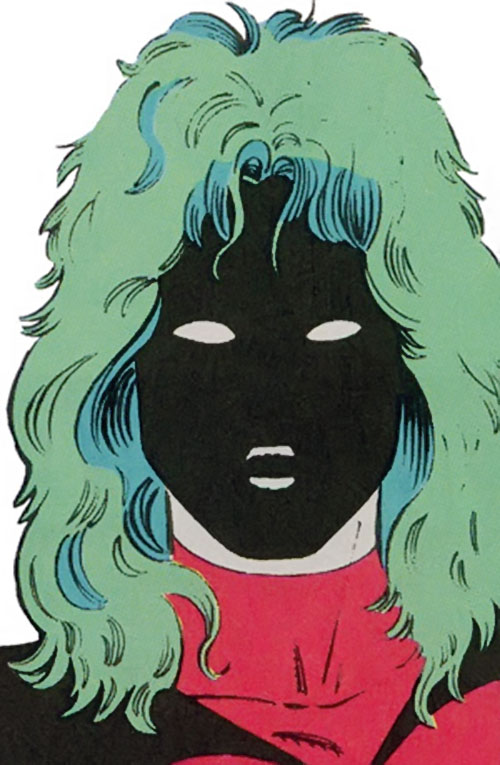