A highly-trained security agent, Shade is a skilled combatant, armed and unarmed.

His M-Vest projects a protective force field around him. It allows him to attack others unimpeded, even strengthening his blows and increasing his reach. The field appears to always be on at a low-level, but he can be cold-cocked if caught by surprise.

The force field can be used to project the force of an attack back on the attacker on occasion. It can also prevent security system from noticing the wearer. The suit further allows him to fly. 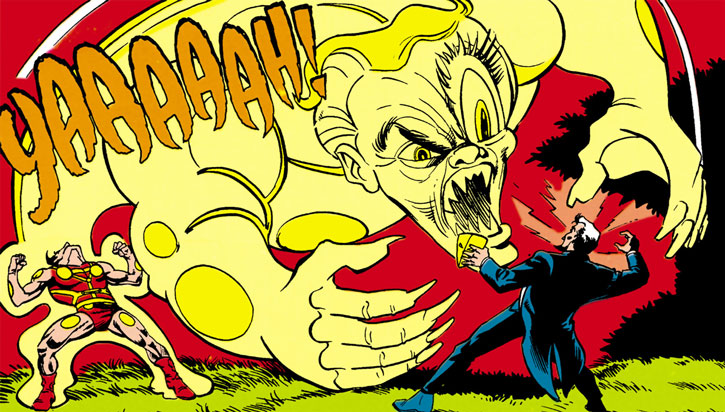 The suit has a defensive feature which enhances the target’s fear (or the emotional state of the wearer) and manifests it as a fearsome form projecting around the wearer. These may be made visible only to the target of the effect, or to everyone, and the manifestations seem more solid, matching his moves and allowing him to attack with greater range.

The vest’s dimensional travelling abilities no longer seem to function following the Crisis On Infinite Earths, which changed the relative locations of the zones.

(His earlier history can be found in the Ditko era entry.)

Pulled from the Zero-Zone by the events of the Crisis, he was abruptly shunted back there after helping battle the Anti-Monitor. He then found that the dimensional realignment meant the M-Vest’s dimensional travelling capabilities no longer worked.

Shade survived in the Zero-Zone until members of the Suicide Squad stumbled there, escaping from another dimension. Shade saved them from the Zone’s residents. Then he used the M-Vest to trigger the dimension travelling abilities of the unconscious Nightshade, returning them all to Earth.

The Squad helped him infiltrate the ORC and stop Doctor Z.Z. and his students. Shade battled Z.Z., who got the upper hand until Rick Flag Jr. shot and killed him. Wizor tried to arrest Shade, but Flag turned his gun on him, forcing him to let Shade leave with them.

Amanda Waller offered to help Shade find a way home, in exchange for his working with the Squad. He accepted. Shade also offered his technical expertise, although this was primarily based on his view of Earth-Zone technology as inferior. Thus, it’s debatable how much help he provided.

He took part in a number of missions. But there was little sign of them even looking for a way to get him home. As a result, Shade’s frustration made him susceptible to Lashina’s offer of help in exchange for him helping her get home. She claimed her home dimension, Apokolips, was closer to Meta.

Kidnapping Vixen and Captain Boomerang, Shade accompanied Lashina and the captives to Apokolips. There, she immediately betrayed him. Several members of the Squad and their support staff, including Briscoe, Dr. Light, and Flo Crowley, died in the battle. Darkseid then appeared to put an end to it, sending everyone home.

Shade found himself back in the Meta-Zone, wracked with guilt over the deaths he’d caused, and determined to make up for them.

Shade is determined to get home so he can clear himself. He has become obsessed to a degree that he makes decisions he knows are wrong, compromising his ethics.

He doesn’t seem to develop much of a bond with any of his team mates, seeing the alliance as temporary. Shade also evidences a generally arrogant attitude, especially regarding Earth technology. He frequently acts as though understanding Earth technology is simple, even when he ends up breaking things.

Captain Cold: “Yer a cop, ain’tcha ?”
Shade: “I’m a security officer, yes. But how’d you…?”
Captain Cold: “Cops is cops, no matter what ’zone‘ they’re from, pal.”
Captain Boomerang: “Ah, Lenny, me old chum ! You always could sniff to a demon right off !”
Shade: “And you two are obviously criminals. Probably incorrigible. Do you know how my people handle the hardened criminal ? We negate them.”
Captain Boomerang: “Yeah ? What’s that… some sort of shock therapy, eh ?”
Shade: “In a way. We kill them.”

(He explains M-Vest abilities to Amanda Waller when she asks)
Waller: “And these M-Vests are standard issue to Metan security forces.”
Shade: “No. it’s an experimental vest. Its full abilities aren’t even known yet.”
Waller: “Uh-huh. So they chose you as a Guinea pig to test it.”
Shade: “No ! The vest was stolen. I recovered it. But I kept it rather than turn it in because I was afraid it would be hijacked again ! The gang who stole it obviously had help.”
Waller: “Uh-huh. So you decided to use the vest to help track down who stole it.”
Shade: “No ! I first used the vest to help me find the men who framed me for treason and murder !”
Waller: “Ah-hah. I get it now ! You’re nothing but a Metan crook.”
Shade: “No !!! I told you I was framed ! I’m innocent !”
Captain Cold: “So were we, pal ! So’s everybody in jail !!”
Captain Boomerang: “Bwa-ha-ha !”

“The technology used in creating this is crude by Metan standards, but not totally uninteresting. I suppose, with a little work, I could — set it off by accident.”

Amanda Waller: “What do you mean you didn’t know ?!”
Shade: “I didn’t build the M-Vest ! I don’t know all of its properties ! I’m a cop, not a scientist !”
Amanda Waller: “Then why did you tell me you thought you could do something with this Ifrit device ?!”
Shade: “Well, it’s Earth-zone technology, isn’t it ? Which is relatively primitive compared to Meta, yes ? I have enough basic knowledge of Metan devices, and so…”
Amanda Waller: “Boy, you keep up this attitude and I will personally see to it you get back to your blamed Meta-Zone by kicking your butt back there!”

“Tell me : does your plan have another stage or do we just die here ?”

While it may simply be artistic confusion, there’re a few places where his enlarged fear-form appears to be actually touching his opponents, whereas earlier this was purely illusory. I’ve interpreted this as the M-Vest’s powers continuing to grow. 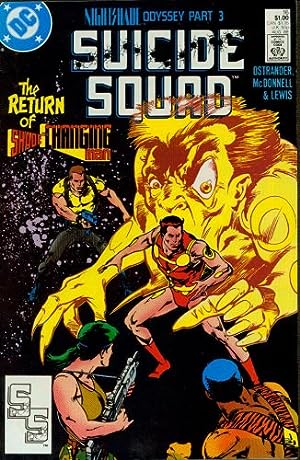 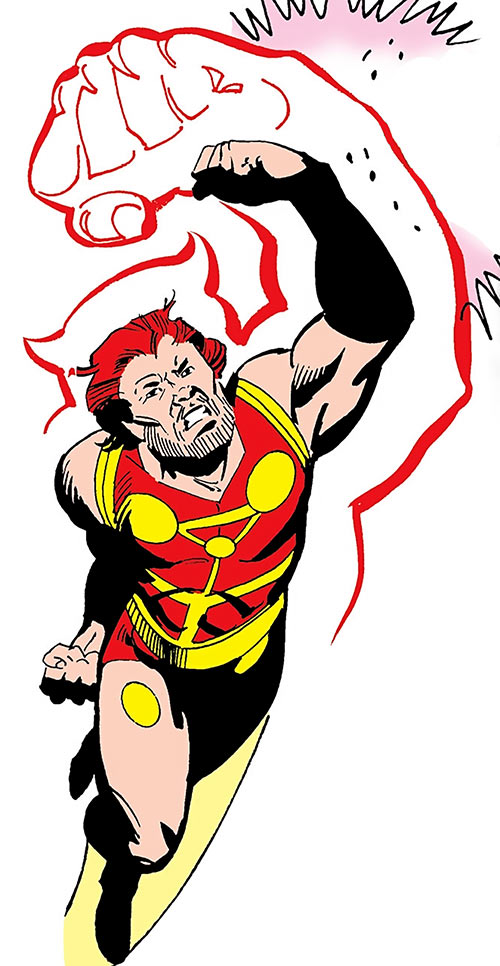 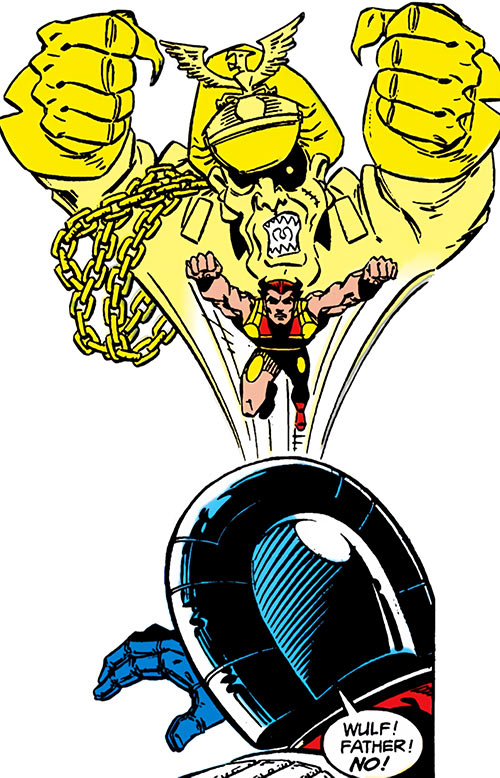 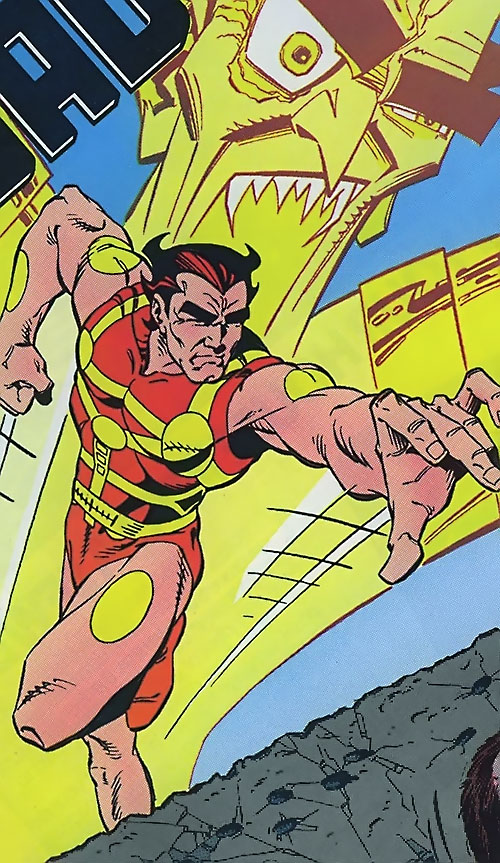 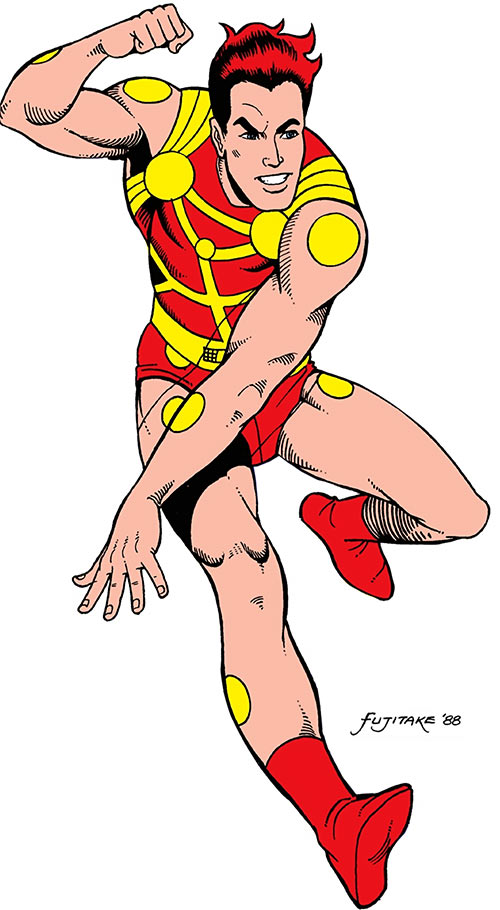