There have been further versions of Shade. In particular, the one created by Peter Milligan in his own 1990 series played an important role in launching the Vertigo imprint. Vertigo was in turn quite influential. But those versions we’re aware of as of this writing are different characters from Ditko’s.

Shade’s 1980s Suicide Squad appearances are covered in our second Shade the Changing Man character profile, to be read after this one.

Shade’s homeworld of Meta is more technologically advanced than Earth. It also exists in a separate dimension, which is linked to Earth’s by the Zero-Zone.

Metans have set up a base on Earth, in the form of the Occult Research Centre, run by Wizor. This is where they act to discredit appearances of unauthorised travellers from Meta by claiming all unusual events are true, and providing them occult explanations.

Meta is an authoritarian society, with a heavy police presence that seems to be at war with organized crime. Corruption and paranoia are rampant, and no one is above suspicion. Yet the fact that members of the ruling council are secretly crime chiefs makes the paranoia understandable.

The Zero-Zone is an unstable landscape of shifting shapes and colours, populated by an array of hostile creatures. Travelling it is dangerous, but some criminals take the chance to avoid the authorities. The security services only travel there in trained squads on specific missions, or when travelling to the Earth-Zone.

The most feared part of the Zero-Zone is the Area of Madness. Anyone caught by it who escapes is left screaming maniacally, never shutting up until the stress causes their death. The only person to survive it with their sanity intact is Rac Shade, who’s actually survived two journeys there.

In DC Heroes terms, a traveller in the Area of Madness suffers a 09 APs Aura of Fear attack whose effect is Permanent.

A highly-trained security agent, Shade is a skilled combatant, armed and unarmed. Furthermore, he is the only person to have emerged from the Area of Madness without screaming until his heart burst.

The M-Vest (or Miraco-Vest, after its creator, Dr Miraco) was originally designed to protect the wearer from hostile conditions in mining colonies. But the prototype was modified to allow travel between Meta and Earth.

It projects a protective force field around the wearer which allows him to attack others unimpeded, even strengthening his blows. The field appears to always be on at a low-level, but Shade can be cold-cocked if caught by surprise.

The force field can be used to project the force of an attack back on the attacker on occasion, and neutralizes security system from noticing the wearer. The suit also allows him to fly.

The suit has a defensive feature which enhances the target’s fear (or the emotional state of the wearer). Then it manifests it as a fearsome form projecting around the wearer. It is visible only to targets of the effect, and appears different to each. It usually seems to be a larger, distorted form of Shade’s own appearance, unless the target has a particular target of their fear.

One of the leading security agents on Meta, Rac Shade was fascinated by, and studied, Earth. This led to him being one of the primary agents dispatched when criminals fled there from Meta. Discovering a weak section where the Zero-Zone got close to the Earth-Zone, he found an empty apartment which he rented as his base there.

To see to the safety of fellow Earth scholar, Agam Loron, Shade was assigned to mentor Agam’s daughter, Mellu, a junior officer in the security service. She learned quickly, and a romantic bond formed between her and Shade. 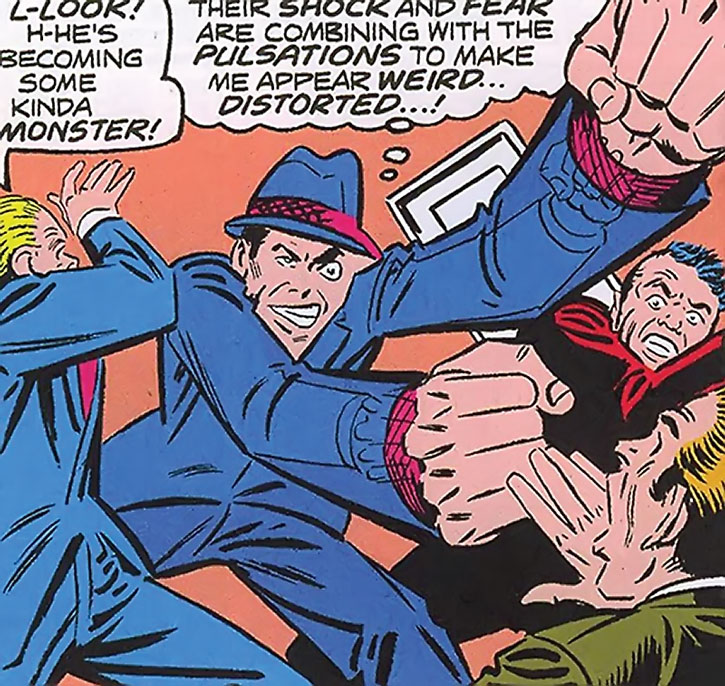 Shade’s mentor and superior, Colonel Kross, assigned him to investigate the theft of the Miraco-Vest. Kross suspected that it was an inside job. Shade discovered the vest in the possession of a resident of the Zero-Zone who was able to break through and loot items from the Meta-Zone.

He recovered the Vest, but wasn’t sure he knew the full story of what had happened to it. In particular, Shade still suspected corrupt agents of being involved. He hid the Vest and some of the other stolen equipment in his Earth apartment until he could be sure.

Agam then came to Shade having learned of a plot by treason forces to take over Meta. Shade reported it to Lt. Emp, his acting superior while Kross was away. Shade fell under suspicion when seen outside Agam’s house just before it exploded, crippling Agam and his wife, Mira.

When Emp claimed Shade had never reported the suspected treason to him, Shade was convicted of treason and sentenced to death.

Shade took advantage of a prison break which dumped inmates in the Zero-Zone. He then used a sensor implant to locate the weak point which let him reach his Earth apartment. Donning the M-Vest, he was determined to prove his innocence and uncover the real traitors.

Shade knew that Emp was on Earth, using his Kempo identity. He began searching for him, investigating his links to local organized crime. He also responded to reports of Metan criminals on the rampage, battling Zokag and Form. Lastly learned that Mellu had been assigned as the N-Agent sent to negate him.

Finally catching up to Emp, Shade got the better of him. He forced him to admit he answered to Captain Majan, and didn’t know anyone else in the conspiracy. But Mellu’s unexpected attack gave Emp the opportunity to flee while Shade incapacitated her.

Heading back to Meta to follow the trail, Shade stumbled across a security patrol being ambushed by natives of the Zero-Zone. Coming to their aid, he was too late to save more than one of them, Sergeant Barak. Barak was badly wounded and unconscious by the time Shade reached him, although not before recognizing his saviour. Shade took him to a hospital undetected.

He contacted Kross, now retired due to his closeness to Shade, who agreed to help. Shade infiltrated Meta Security Headquarters and confronted Majan. Attacked by an invisible assailant, the Cloak, he was kept off balance until the assassin had killed Majan. Shade was leaning over the dead body when Mellu walked in, and fled before she could stop him. 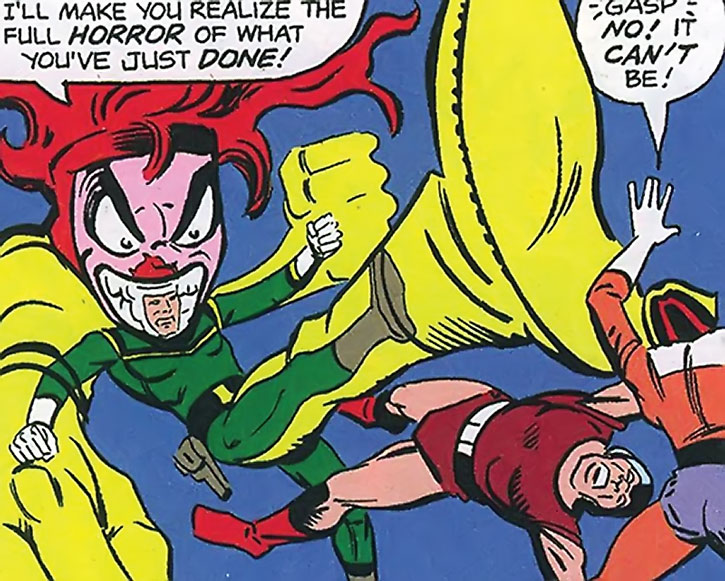 The trail led next to Majan’s ex-lover, the criminal Gola Zae. He arrived in time to see her transport the unconscious Mellu to the Area of Madness.

Knocking out Gola, Shade transported himself and her after Mellu. He rescued Mellu, but not before she was affected by the Area. Taking her to Dr. Sagan, Shade convinced him to use an experimental device to transfer Mellu’s memories of the Area of Madness to him. Sagan did so, and both Shade and Mellu survived the process.

Spotting an attempt by crime forces to break the prisoners recovered from the Zero-Zone out of the hospital, Shade intervened to stop them. He succeeded, but was captured by Mellu. He was imprisoned again, in a prison under the reinstated Kross’ command. However, security measures in the M-Vest prevented it being removed.

It took some doing, but Shade managed to break out of his cell, only to be captured by agents of the crime chief Sude. In Sude’s grasp, Shade got the chance to escape when Mellu and Barak interrupted proceedings to help him. By that point, Mellu had been told what he did for her in the Area of Madness and after. The Sude automaton was destroyed, but its operator escaped.

Suspicious of Kross, Shade decided to investigate his new posting as advisor to President Olon. Approaching the Presidential Palace, he found the security perimeter breached. Shade rushed in, arriving in time to find Khaos. The villain was trying to take over Sude’s role by killing the President, who’d resisted his demands to cede power.

They fought, and Khaos explodes, leaving Shade apparently dead. Kross and Olon hid him from the security forces, calling in Dr. Sagan to help. Yet all he could do was observe while the Vest kept Shade safe until he recovered consciousness. Olon became convinced of Shade’s innocence, but was unable to do anything openly while the treason charge remained. 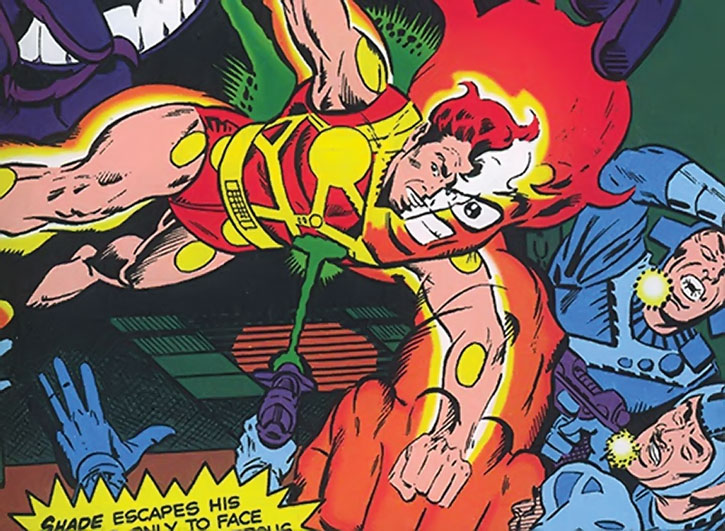 They learned Dr. Z.Z., head of the crime school, has travelled to Earth with his students. Z.Z. had taken over the ORC and destroyed the transporter allowing easy travel to the Earth-Zone. The M-Vest offered the only way to travel to Earth in time to stop Dr. Z.Z. putting his plans into action, so Shade agreed to travel there. After a brief reunion with Mellu, he set off.

(The final issue was cancelled before publication, but printed in the Cancelled Comics Cavalcade, and while the ending is a bit awkward for the start of the next entry’s History, it’s included here for completeness.)

Shade’s journey back to Earth was hampered when he was captured by a Zero-Zone resident building an army of slaves. Such an organized force could pose a serious threat for Meta or Earth. Thus, when he broke free, Shade also freed the other prisoners, letting them turn on each other while he dealt with their master.

Leaving them in chaos, he continued on to Earth, where he made plans to deal with Dr. Z.Z.

Serious and driven, Shade remains a policeman despite his predicament. He’ll fight any criminals he comes across while following the trail to prove himself innocent with unrelenting determination.

Honourable and even-tempered, his circumstances have forced him to be suspicious of most people, apart from Mellu, as he learns how deep the corruption in Meta goes.

“Tell me where Kempo’s hiding, Rega, or I’ll see that you die a shrieking death in the Area of Madness of the Zero-Zone !” 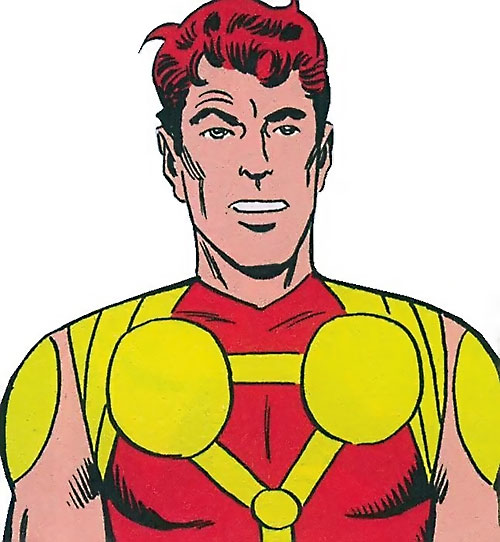 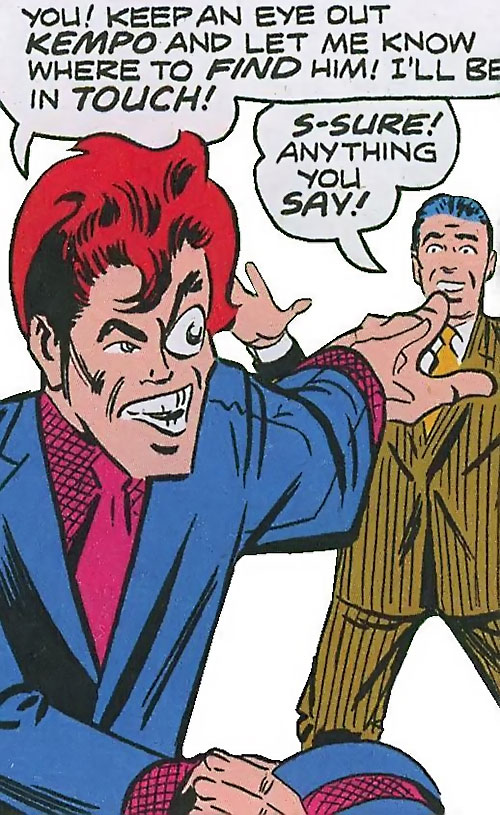 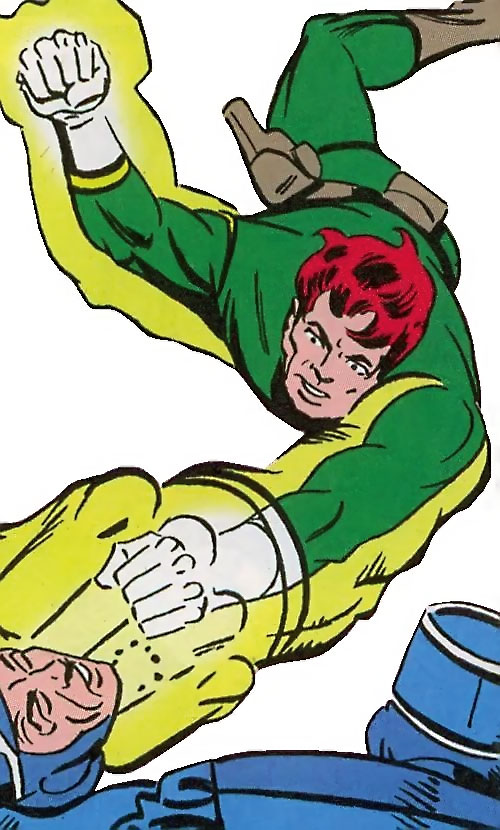 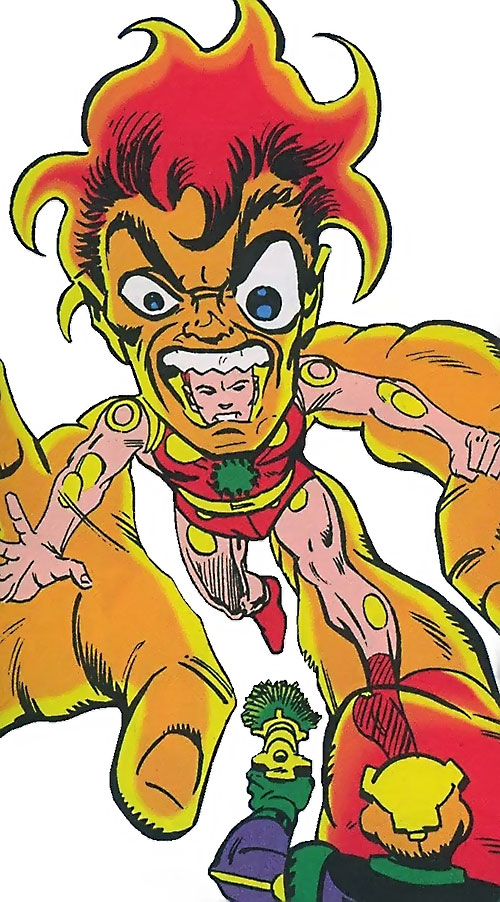