Shades is a veteran street hoodlum. He’s able to conduct successful crime sprees as long as he’s working with Comanche – they work well together.

While he’s not as strong as Comanche, he has a killer instinct and is an excellent shot.

Shades is also better than his buddy at coming up with plans and talking to people.

During the 1980s, Shades was outfitted with a Cyclops-like visor that could project an optic blast. The concussive beam could hurl people back with great force (in DC Heroes RPG terms, Superbreath), and Shades often relied on this property to keep opponents at a range.

Shades stopped packing a piece when he got his visor.

It was recently revealed that the visor — originally thought to have been provided by Ward Meachum — had actually been designed and built by the underworld genius Nightshade. It worked using ambient bioelectricity (though others may have called this energy “chi” ).

Comanche and Shades are two street criminals from Harlem. Along with Carl Lucas (who would become Luke Cage) and Willis Stryker (who would become Diamondback), they made up the small Rivals street gang in Harlem. The Rivals worked the street for more established mobs.

Presumably, they continued to associate with Stryker when he became a mobster, whereas Lucas decided to go straight.

During his youth, Shades became involved with a fellow New Yorker named Reina Alvarez. They were together for years and had a son, Victor. They apparently never married.

Shades and Comanche ended up imprisoned at Seagate, where they were reunited with Carl Lucas. The pair tried to convince their fearsome and charismatic ex-associate to lead a prison riot. They presumably intended to escape in the fracas.

Lucas turned them down, and when Comanche pulled a shiv to threaten him, flattened him in one punch.

Some time later, Lucas involuntarily escaped due to a mishap during an experiment. He renamed himself Luke Cage to hide his status as an escapee.

One of the correction officers responsible for the mishap and Cage’s escape, Rackham, was furious about the incident. He took out his frustration on the prisoners, particularly the African-American ones. This earned him the burning hatred of Comanche, Shades and numerous others. Rackham was then fired for brutality by a new, progressive warden.

Motivated by their loathing of Rackham, Shades and Comanche managed to dig a tunnel out of Seagate using spoons, and escaped. This was one of the very few successful escape attempts in the history of Seagate. The duo, providing for themselves via numerous small crimes, tracked Rackham throughout the US.

They caught up with their prey in New York City. By that point they had accumulated plenty of dough and were well-armed.

Not wanting Rackham to recognize them, they decided to use disco-style costumes and masks. The pair also felt that Village People -style costumes would allow them to garner more respect in Harlem. Back then this neighbourhood had a… distinctive underworld scene including the likes of Gamecock or Cheshire.

Do the Harlem shuffle

At this stage, the duo’s plan was to set up a protection racket in Harlem and kill Rackham. Needing an edge, they approached Carl Lucas. By then Lucas had changed his name to Luke Cage and was working in Harlem as a locally famous “hero for hire”.

Shades and Comanche offered to help him if he agreed to join their attack on Rackham. At that point, Cage needed all the help he could get to prove the innocence of his friend Claire Temple. Thus, he agreed to the deal.

The three ex-convicts’s revenge against Rackham was derailed when the vigilante Stiletto (Tom Stuart) blew up Rackham’s house to kill the escapees. Stiletto’s attack resulted in Rackham’s death, but the three Seagate alumni escaped. Shades and Comanche considered that they owed Cage for saving them from Stiletto, and said they wouldn’t rat on him.

When Cage met the pair again, they were working for John Bushmaster. Bushmaster had blackmailed Cage into working for him, and sent him to kill ex-cop Misty Knight. Shades and Comanche were monitoring the hit.

Cage ran into Iron Fist, who hit him with such force that Shades and Comanche were convinced that Cage was dead. Not wanting to face Iron Fist, they hurriedly drove away to report to Bushmaster.

A step up (of sorts)

Shades and Comanche were later hired by criminal industrialist Ward Meachum. They decided to get more firepower, and it was presumably Meachum who put them in contact with underground technologist Nightshade. Comanche and Shades wanted super-weapons based on their nicknames, and trained until they were proficient with those.

The armament came with a hefty price tag, though, leaving them financially indebted toward Nightshade for years and years.

Flush with confidence, Shades and Comanche confronted Cage to establish street cred. They defeated him with their special weapons. This victory was mostly a product of surprise, however. When Cage found them to return the favour, he thrashed them.

Shades and Comanche continued to work for Meachum. They were not very successful agents, though. In particular they failed to locate a compromising piece of film that Meachum wanted destroyed. When Cage and Iron Fist invaded Rand-Meachum’s corporate headquarters, Shades and Comanche tried to kill them to restore their rep. They ended up pinned under rubble.

Shades eventually left crime behind. He became a community organiser in Hell’s Kitchen, fighting for decent housing for the locals (in the Marvel Universe, this neighbourhood never was gentrified).

His son Victor often joined him, being now a young adult. However, Shades’s relationship with Reina Alvarez fell apart. She had learned that he was betraying her with a woman from the community organising movement.

Reina moved to her brother Ignatio’s apartment, and took Victor with her. Shades’s son remained in frequent contact with his father, though he didn’t know about his infidelity and was not dealing well with his parents separating.

After Norman Osborn became America’s top cop, the opposition to Shades’s activism became markedly more vicious. One Hell’s Kitchen building in particular became a focal issue. The NYPD was to expel the inhabitants in dubious circumstances, throwing them to the street so Oscorp could turn the place into a luxury condo.

The cops sent three protesters to the hospital. Shades and other activists came to live in the building full time to oppose police brutality. Shades brought his optic blast visor in case the situation degenerated. The law enforcement situation in New York City was degrading so quickly that police death squads were a possibility.

When Osborn sent Bullseye after Daredevil, he told his pet psychokiller to also blow up the contested while he was at it. Bullseye rigged the building with explosives without being detected. He challenged Daredevil to a fight, lured him on top of the building and detonated it, killing one hundred and seven persons.

Shades and his son Victor Alvarez were both in the building when it exploded. Victor Alvarez was the sole survivor, having gained chi-related super-powers during the catastrophe. According to scientific genius Nightshade, these powers came from the fragments of Shades’s pulverised visor which were lodged in his son’s body.

The chi form of Shades gestured at him to open up and absorb more chi from the area. This gave his son the lifeforce necessary to amp his abilities and survive his next fight.

The Village People visuals and other hints in the story makes it nearly impossible not to assume that Shades and Comanche are a couple.

Shades is the leader of the duo, and likes to come up with ambitious plans. However he deals poorly with frustration, and will become increasingly rash and uncontrolled if he cannot achieve his goals.

Shades later changed his game. He decided to fight for a good cause, take care of his son (which he had seldom seen while he was young, since he had spent years in prison or on the run) and be responsible. It wasn’t an utter success as he betrayed Reina Alvarez, but he seemed sincere.

He changed his general demeanour away from his old street style, and he may have gotten himself an education. He no longer spoke in a street style, wanting to distance himself from his past but not from his roots.

“We rough ’im up a bit, relieve him of some of that beautiful money and let ’im know we’ll be back… with reinforcements ! When we do come back it’ll be at every store he’s got ! Our boys’ll offer him protection against other dudes rippin’ off a big, important businessman like hisself !”

(To Comanche) “Patience, my mellow.”

“Yeah, I got it Lucas. Now get this : Comanche ’n’ me been told to kill you. That means you’re dead.”

“Uh-uh, Lucas — this time it’s going to be different ! ‘Cause this time — we are the new and improved Shades and Comanche ! Dig ?”

Shades: “We wouldn’t be able to spend this in prison — so we’re motivated.”
Comanche: “But good !”

Drawbacks:
MIH of Rackham, SIA toward Giving in to frustration (see below).

Detective (Legwork) is there for those campaigns with house rules about Unskilled Character Interaction.

Shades doesn’t handle frustration very well. If an opponent keeps dodging his blasts he’ll start using his raw DEX rather than his Skill as AV, his anger making him fire wildly.

On the other hand, he and Comanche occasionally make good Team Attacks. If they intend to burn HPs during a fight, they will probably do it when Team Attacking. 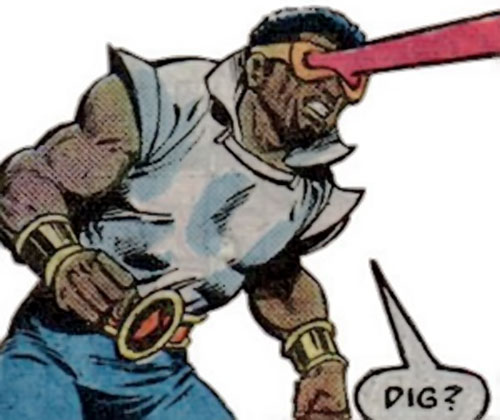 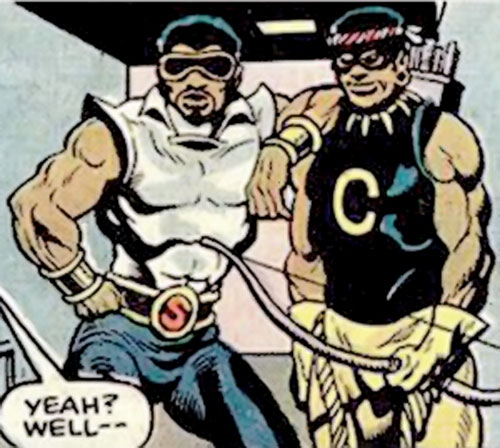 As a youth and Harlem Rival : 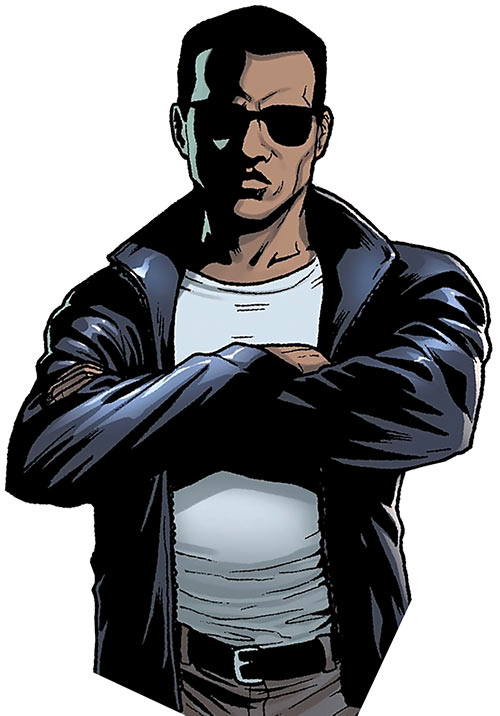 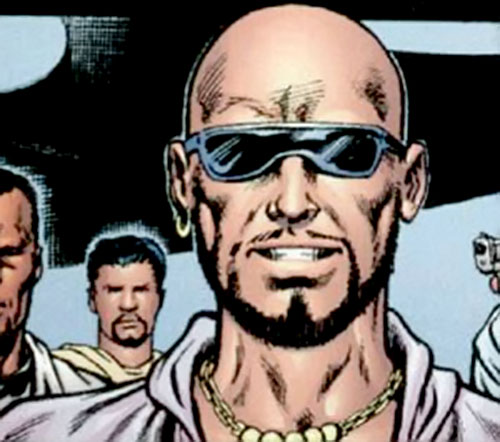 Just before his death, with his son : 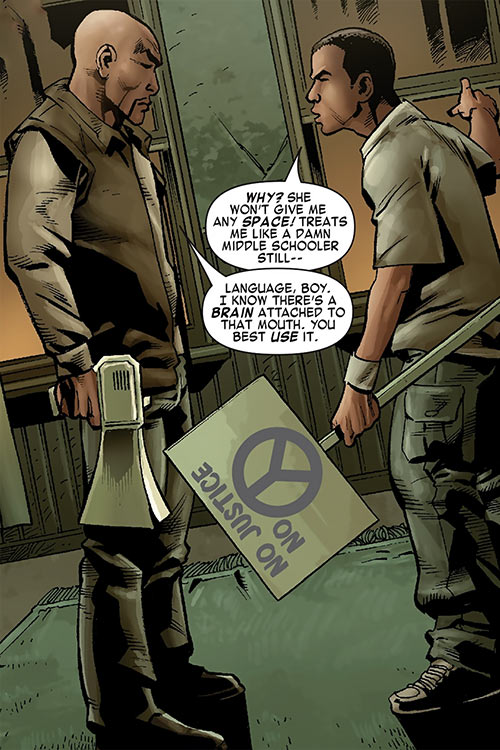