Shado is one of the deadliest women on DC Earth, along with such killers as Lady Shiva or Cheschire. She has reached past mere archery to become shado, the essence of archery. As such she is a zen mistress, one with nothingness. She is able to kill heavily armed groups of men with little difficulty.

Although Shado has only four arrows, that generally means four kills. Once she has used them, she will use her fallen opponent’s weapons against the survivors. She has demonstrate to ability to use any weapon at hand with extreme efficiency, from hand grenades to nunchaku and assault rifles to thrown knives.

Shado’s father, a man named Tomonaga, was Yakuza and knew where a Yakuza fortune was hidden. Former OSS  agents attempted to discover that fortune after the war, and killed his wife to make him talk. Tomonaga executed seppuku soon after.

The Yakuza  took his orphaned child to be raised as their instrument of vengeance against those Americans. They gave her to a master kyudoka , Yoshitomo, so he would raise her. They had the child tattooed with a dragon to mark her allegiances and giri .

Yoshitomo himself owned obedience to the Yakuza due to ancestral giri. He taught the kid in the way of bushido and kyudo, until she became a master of both, becoming shado. She then was ordered to kill all the men responsible for the death of her parents, and left Japan for several years.

Revenge is an archer

Later, Dinah “Black Canary” Lance, then Green Arrow’s companion, was captured and tortured by Shado’s last target. Accepting that his vengeance was more important that hers, she let him kill that man.

The oyabun commanded that Shado cut off her own bow finger to atone for not killing the man herself. But Yoshitomo stopped that foolishness by threatening to shoot the oyabun, allowing her to flee. The fool gunned Yoshitomo down in anger, and Shado took his life.

Thus was war declared between Shado and a large part of Japan’s underworld. They will either kill her, or she will destroy them. There is no other way.

Duty has been honoured

Shado has since crossed the path of Green Arrow several times. On one occasion, they lived together for a short time, and Shado became the mother of Green Arrow’s second son. This relationship was one of the things that led to the break-up between Green Arrow and Black Canary.

Shado still lives calmly under assumed identities. She does what has to be done and raising her son to become an archer.

Shado is a petite Japanese woman. She wears her hair long, tying them in a braided queue when fighting.

Her usual clothes while fighting are white hakama and obi, black tabi, and a black dress/loincloth, with a right sleeve and a “collar” covering the lower half of her face. Her left arm, shoulder, breast and shoulder blade are tatooed with a red dragon.

Shado uses a 30kg daikyu, with four 1m long arrows set in a kyujutsu quiver, on the back of her obi.

She is a kyujustu master, speaking little and walking in honor and clarity. She neither gives nor expects quarter. The only time when she can get slightly expansive is when she’s with someone she loves. This has only happened with two men, now dead, and her son. 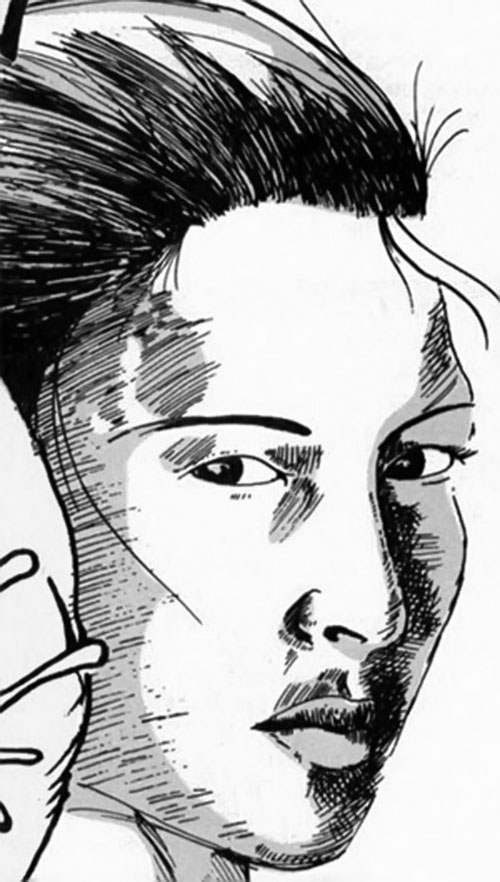