Shadow Lass’s shadow powers consist of a negative energy field which absorbs all visible light frequencies (in DC Heroes RPG terms, Darkness). It also dampens surrounding parts of the spectrum such as infrared and ultraviolet light (Energy Absorption). She has worked since gaining her power to establish fine control over her shadows and is now able to cast very precise forms (Accuracy).

Often her shadows have straight-lined, geometric shapes to them. For instance she creates “shadow cones” or other shapes that will block her enemies’ sight but will not impair her teammates. She can even target the head or eyes of a single target if she chooses (Sensory Block).

Like all Talokians she can see in the dark, an ability which was enhanced when she gained her shadow power (Ultra Vision).

Shadow Lass is athletic and is often found working out in the Legion’s gym. She was trained in the martial arts by her mother and is one of the Legion’s more formidable hand-to-hand combatants (Acrobatics, Martial Arts). She is also, like all Legionnaires, skilled in the operation of Legion vehicles and spacecraft (Vehicles).

She can fly using her Legion Flight Ring, and operate and communicate in space or other hostile environments using her Transuit and Telepathic Earplug.

The Mallor family of the bleak, sandswept planet of Talok VIII, has a heroic legacy stretching back a thousand years and more. The founder of the family line, a man named Mallor, nearly died helping his people fight off an alien invasion. But instead of dying he gained the power of Shadow, perhaps from alien equipment, perhaps from the hand of Maakas.

From that point on, one Mallor descendant in each generation wielded the shadow power in defense of the Talokian people.

Lyrissa Mallor, a 20th century representative of the family, helped found the L.E.G.I.O.N.. She was one of its first and most beloved martyrs. Lyrissa’s daughter, Lydea, also a L.E.G.I.O.N.naire, became the most famous (and powerful) hero of the Mallor family.

She was prominent enough to gain the attention of Darkseid himself, who would use a clone of her as one of his Servants of Darkness in the 30th century. Lydea was remembered on Talok long after the L.E.G.I.O.N. was forgotten.

Her descendants are also great heroes, guarding the blue-skinned City People from the green-skinned Hill People, or Yakka-Mahor, as well as the occasional alien incursion. Tasmia Mallor and her cousin Grev inherited the family tendency toward heroic leadership in times of trouble.

When they were both young, the last members of their line, they traveled to a cave deemed sacred to their family. There they were exposed to a catalytic gas which awakened their latent Mallor shadow powers.

Tasmia, as the elder of the two, became Talok VIII’s shadow-champion. Never before in Talok’s history had two Mallors held the shadow power at once, and Grev was somewhat ignored by his people.

Tasmia spent the next few years guarding Talok VIII. On one occasion she single-handedly thwarted an attack on the City of Talok by the Yakka-Mahor. But she was off-world when the Fatal Five conquered Talok. She took advantage of her freedom to lead a team from the Legion of Super-Heroes back to Talok VIII.

Together they defeated the Fatal Five, in the process preventing the conquest of the entire United Planets.

Secretly, her growing personal interest in Brainiac 5 influenced her decision. But when Brainy proved romantically cold, Tasmia’s interest shifted to Mon-El. Tasmia and Mon-El have remained a steady couple ever since. They frequently spend time with another Legion couple, Ultra Boy and Phantom Girl, Shadow Lass’s closest friend.

Mon-El was critically injured by the Time Trapper during the Conspiracy. As a result, Shadow Lass left the Legion to travel the galaxy with him while seeking a cure. During this time she apparently performed a Talokian bonding ritual on Mon-El, akin to Terran marriage. Her history gets murky after that, due to manipulations of the timestream (and of the readers).

Shadow Lass married her long-time love Mon-El—who in the Five Year Gap continuity is called Valor—and is exploring the galaxy with him, usually wandering outside UP space. This gives them both the Married Drawback and the Voluntary Exile Drawback.

Grev has settled into the role of Shadow-Champion, no longer Shady’s substitute in any sense. It’s possible that she may no longer have the Local Hero or Popularity Advantages.

Note: Depending on your interpretation, she is either Married or Widowed after the Magic Wars in the original timeline, too. In the “widowed” version of things, she retired to Talok to seek a life of contemplation. This seems out of character for Shady, though, as does most of how she behaved in the Five Year Gap continuity, so feel free to ignore it.

She sometimes wears a tiara or wears a golden brooch on her chest, shaped like a stylized “s.” The various pieces of jewelry may be ceremonial Talokian pieces, perhaps related to her role as Shadow Champion.

Shady is confident and bold, with a regal bearing. She never gives up, facing up to the likes of Computo and Darkseid without showing fear. Lesser foes, such as the Persuader or Lady Memory, never make her break a sweat. Despite a sometimes sharp tongue, she gets along well with all the Legionnaires, though she’s not very fond of Timber Wolf.

She is devoted to Mon-El. With him she will occasionally allow herself to seem weak or overwhelmed as she leans on him for support—though some of that may be for effect. More often it’s the other way around, as she lends the sometimes troubled Mon-El her strength and stability. Shady’s closest friend is Phantom Girl; she is also close to her cousin Grev.

“Why are you so upset ? You know that there is always hope. The Legion can handle any danger that’s thrown at it.”

Element Lad: “It’s no use, ladies. Whatever Computo came up with, I can’t get through ! It’s hopeless !”
Shadow Lass: “Hopeless ? And you want to be leader of this team ?”

“I am Tasmia, sir—granddaughter to Sarven Mallor, who you honor so.And while I do not know how…or where…I can find the strength—if my ancestors watch over me, I will die before I let them be dishonored.”

“Yakka-Mahor—Hear me now ! Leave the city’s plains—go back to your mountains in peace—or feel the wrath of Shadow Lass ! If there is dark evil in your souls, then live in darkness !…I am of the blood of Mallor—the blood of heroes—and I bid you begone !”

Darkseid: “You do not seriously expect to hide from me within darkness, do you ?”
Shadow Lass: “It worked against your murder machines—maybe it’ll stop you, too. And if not, what’ll you do ? You can’t kill me more than once anyway !”

There’s a post-Zero Hour version of Shadow Lass in the current DCU, called Umbra; the two are similar but there are significant differences both in origin and in stats.

If you want to keep Umbra and the post-ZH LSH, then these stats, with minor tweaks, could be used for any “generic” shadow-champion that you like, at any time period—say, the 25th century, for example.

If you take that route, you might look at adding a few skills, like Military Science or Weaponry (Melee), as it’s likely that Shadow Champions would be trained in such things.

The original Shadow Lass would likely show up only via Hyper-time . Still, Umbra’s contacts with the present day are limited enough that it wouldn’t be hard to substitute Shadow Lass for her.

For example, when Jack Knight (Starman) traveled to the 30th century in Starman 50, he would have encountered the pre-boot Star Boy and Shadow Lass, probably with Mon-El/Valor in tow.

It is, in fact, possible to fit the original 30th century into the post-Crisis DCU without a re-boot—or a pocket universe, either. Just have the LSH meet a teenage Clark Kent and invite him to the 30th century to become a Legionnaire, honorary or not as you please, as Superboy.

If it’s important to you that Superman was never Superboy, then just stipulate that his only adventures as Superboy were in the 30th century, with the Legion. Thanks to Saturn Girl he didn’t remember those adventures when he went back to his own time.

With that in place, the most essential gap in the Legion’s back story—the inspirational role of Superboy—is filled. As a result, the Legion’s pre-Crisis history can be as intact as you please. Any inconsistencies you can blame, like Paul Levitz did, on imaginary stories or chronicler’s errors.

It should be noted that in the original, pre-Crisis history, Lydea Mallor was the first heroine in Shadow Lass’s family. Meaning there was no Lyrissa Mallor, at least not one who was a Shadow-champion and hero. The L.E.G.I.O.N. itself is a post-Crisis innovation.

However, it’s possible that in a thousand years records became garbled, and Lyrissa was forgotten, like the L.E.G.I.O.N. itself. Lydea Mallor was the most powerful Shadow-champion known, so it’s easy to imagine that she might have eclipsed earlier members of the dynasty, especially given that Lyrissa was sold out by her own people and sent to an off-world prison to appease the Invasion Alliance.

Though Lyrissa escaped and went on to help found L.E.G.I.O.N., she died without ever returning to Talok. Such an episode might well have been suppressed in official histories.

These were Shadow Lass’s stats in the early Adventure years.

Notes:
There’s no reason not to give her Energy Absorption as well, but I don’t believe it was ever shown or referred to during this era. It’s up to you whether or not you include it.

Bonuses and Limitations:
8 APs of Ultra Vision are Contingent on Darkness (-1 FC).

The Energy Absorption power is explicit in the v1 Sourcebook, Who’s Who, and Who’s Who in the Legion, and there are enough slight hints in a couple of stories that I went ahead and gave it to her. Sensory Block represents pinpoint use of her shadows. 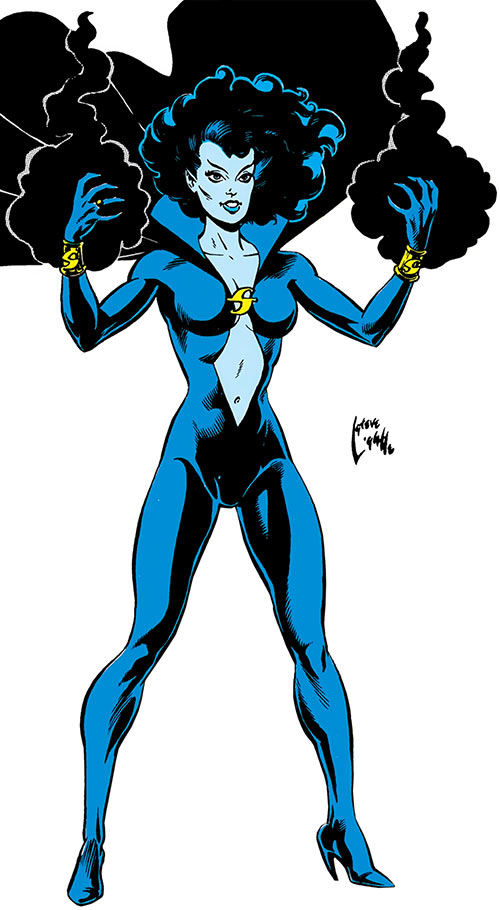 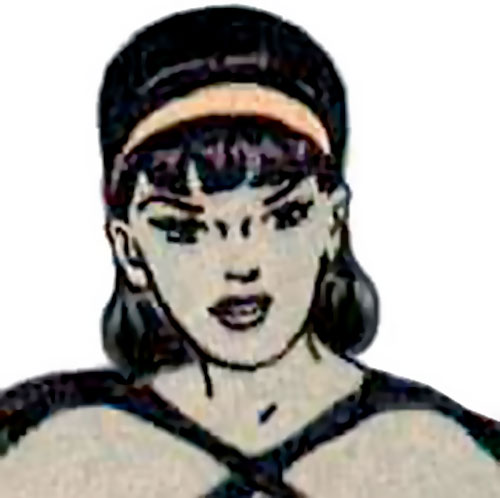 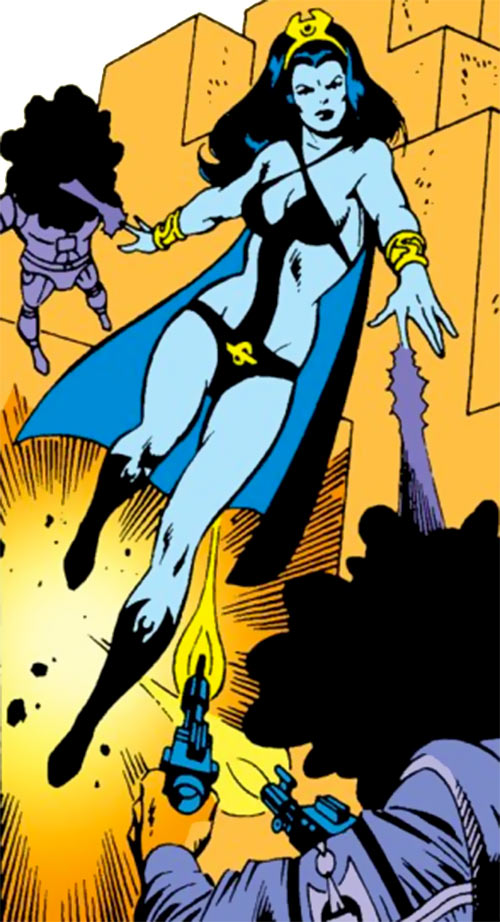 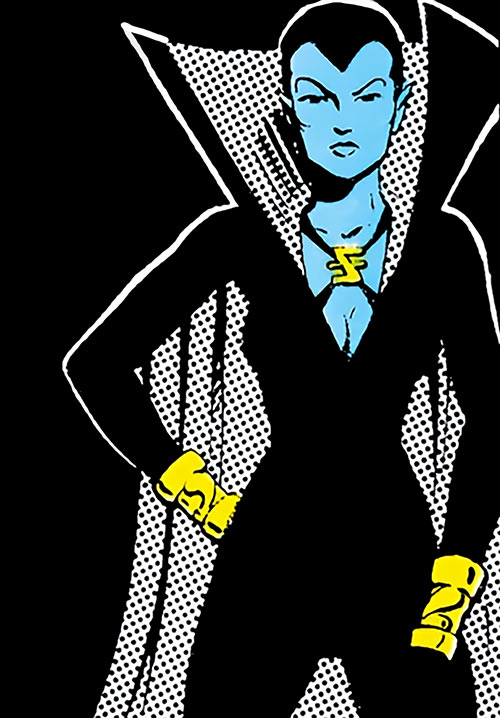 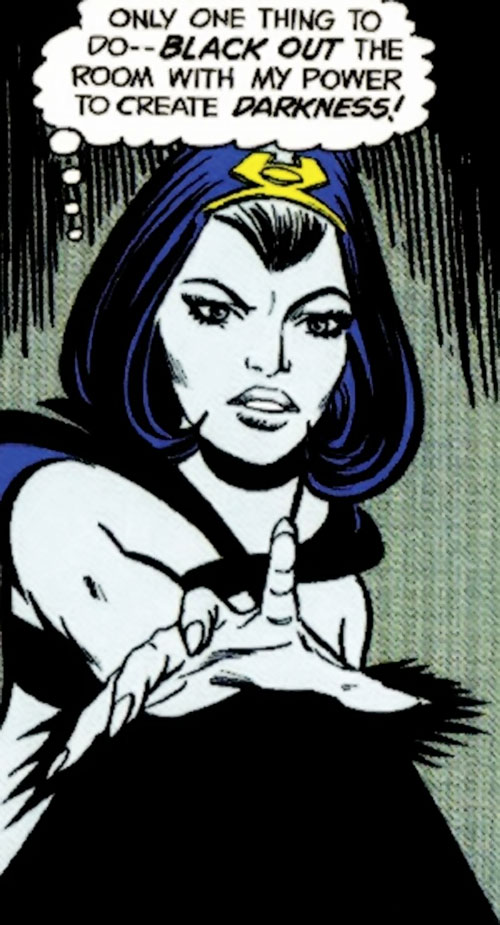