The original Shadow Warrior shooter video game was released in 1997. It was in the same vein as Duke Nukem, albeit a bit less embarrassing. Arguably. It’s debatable.

Unexpectedly, a new version/reboot appeared in 2013. It still was a lowbrow double-A shooter, with a slight retro sensibility.

Personally I wasn’t a fan – I find most Devolver-published games tiresome. But it received solid reviews. And heh, I got it during a giveaway.

The following notes are based on chapter 0-7 of the game.

Lo Wang is a glorified street tough. He’s thick as two short planksDismally lacking in intelligence., gullible, and comes across as a juvenile poseur. 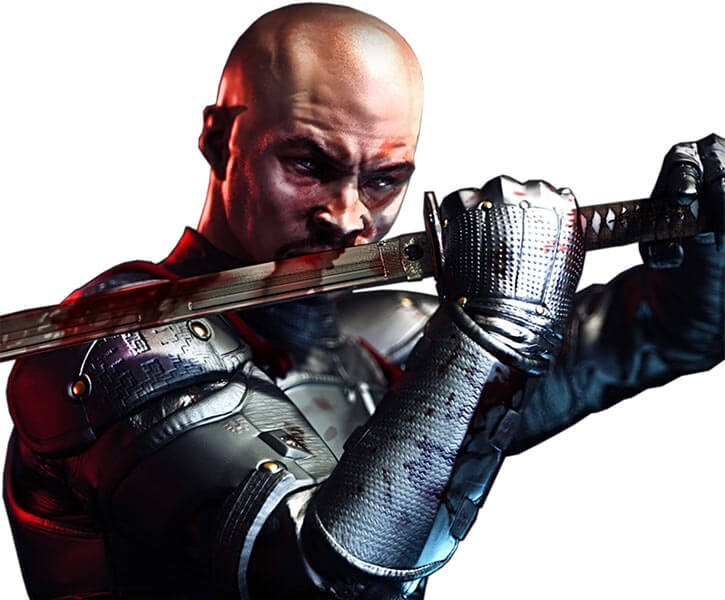 During the game’s early chapters, Lo Wang is armed with :

He also presumably has full tactical webbing, given how much ammo he carries.

Wang drives a 1970s Nissan Fairlady Z  (aka the Datsun 240z) sport coupé. It was an early but successful Japanese stab at a Porsche-style sports car.

He will routinely drive it at 90mph (150 km/h) on winding countryside roads.

He actually owns two – one black, one white.

Not long after the game starts, Lo Wang is endowed with the ability to use life energy (chi ) for combat purposes. This is done through Ancient demon magic.

During the early chapters (and depending on your in-game character build), Mr. Wang might perform such feats as :

The game opens with Stan Bush’s 1986 The touch. This tune has been used in a number of movies and games to convey 1980s heroic neon pop-rock.

Shadow Warrior (2013) doesn’t quite take place in the real world.

It is closer to Sonny-Chiba  -style grindhouse 1970s Japanese action movies. This means a version of the country that is poorer, and with more traditional trappings, than modern Japan.

There are technological anachronisms (chiefly the weapons), which seem to stem from Zilla Industries. But most other tech markers, such as the cars and the video game arcades, point to the early or mid-1980s.

The music Lo Wang listens to is mid-1980s hair metal. He references Mickey Rourke as a major movie star, which also means the mid-1980s. There are brick-like car phones. There are VHS tapes strewn about. Etc..

It also seems to be a much more violent, squalid version of reality where life is cheap. Think vintage men’s adventure periodicals, or grindhouse cinema.

Younger viewers might associate the 1970s grindhouse cinema style with Quentin Tarantino (say, Kill Bill). This would be about right for Shadow Warrior.

Like with many of those stories, it’s almost entirely masculine.

There seems to be a sense in society that the supernatural exists. But it’s not overt.

Devolver video games are anachronistically huge in that world. Serious Sam, Hard Reset, Hotline Miami and the like are big hits at the arcade and in comics.

Wang’s comics collection also hints at a different world. There are 1920s Belgian bande dessinée  (but horror-themed), and strange crossovers between various types of Silver AgeSuper-hero comics from the late 1950s to the early 1970s manga, US comics and various European comics, etc.. It’s intriguing.

Much of the action in Shadow Warrior occurs after contact with the Shadow Realm. Hence the name.

The Realm is a sort of feudal Japanese hell dimensionOther realms of existence that are not our universe. It is populated by demons, though these aren’t necessarily evil. A lot of it looks like dismal, barren, jagged mountains where gravity doesn’t necessarily apply. There’s a fair bit of lava involved.

The Shadow Realm is ruled by a caste of immortal demons, the Ancients. These have stronger supernatural powers than run-of-the-mill demons. 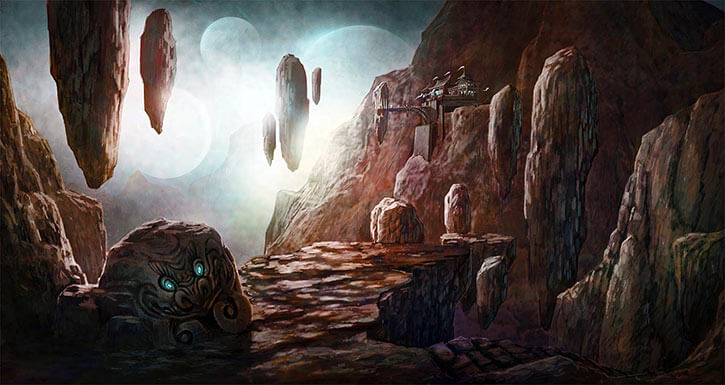 Lo Wang apparently grew up in China. He mentions studying tai chi as a young boy.

One gets the impression that he moved to Japan as a young teenager. Perhaps to join Japanese relatives after losing his parents.

Mr. Wang became an employee of sinister Japanese conglomerate Zilla Industries. It seems to be an early-XXth-century-style zaibatsu. That is, a highly integrated financial/industrial powerhouse with deep ties with the Japanese military and government.

Zilla Industries is also its own league in the underworld. This is where Lo Wang comes in, as he was one of their best assassins.

Such ruthless killers are routinely deployed by Zilla-san, including against yakuza clans and foreign mobs. One gets the impression that they don’t have to worry about the law.

Lo Wang was given a suitcase filled with $2M in cash. He was sent to buy some old sword from yakuza lord and antiques collector Mizayaki-san.

As he would soon learn, previous attempts at buying had failed. Mr. Wang thus had orders to resort to violence if the cash offer didn’t work. 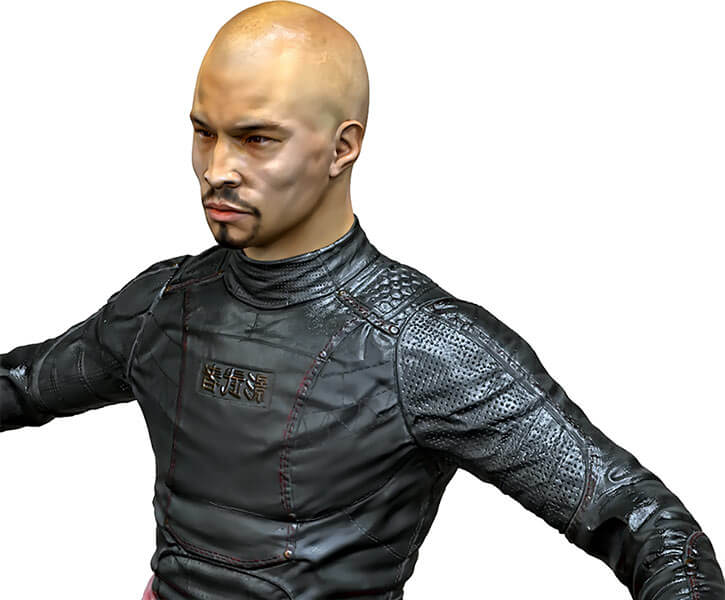 A failure of commerce

Zilla Orochi then called to make another offer. Thus discovering who was the persistent would-be buyer, Mr. Mizayaki even more energetically refused to part with his relic.

Freeing himself in the commotion, Wang fought his way to Mizayaki. But the old man was dead, and the sword had already been stolen.

Mizayaki’s spells stemmed from a masked demon, called Hoji. Hoji seized Wang’s predicament, offering partial possession in return for healing and getting out of here.

The assassin took the deal, providing the immaterial Hoji with an agent in the mortal world.

Hoji also made it possible for Wang to use chi-based magic, as he would need this to fight demons. The first use was to fix Lo’s legs.

Though the ghost remained elusive, he told Wang that they needed to hunt down golem-like constructs called the Whisperers to locate the sword. Wang drove back to town to find the Whisperer he had glimpsed back at the yakuza compound.

However, the town had already been ravaged. The Whisperer’s demon escort was killing everyone to protect her.

Hoji indicated that the Whisperer needed a temple to return to the Shadow Realm. Lo first fought his way to his house, since it was near a major cemetery – and thus near the largest temple in the area.

Though his luxurious villa had been wrecked, Wang could rearm in his “Wang-cave”.

There, he also donned custom-made body armour to live his fantasy of being post-apocalyptic Batman.

Then shaved his head to live his fantasy of being Kwai Chang Caine. Or maybe Travis Bickle.

Hoji also explained that he had lost his memory 200 years prior, when exiled from the Shadow Realm. But he knew that the Nobitsura Kage sword could kill in revenge whoever had exiled him. And that Lo Wang was a fine swordsman.

However, the sword had been magically split into three shadows of itself.

Furthermore, Wang soon discovered he would have to follow into Doomguy’s steps – through fighting forays into Hell. 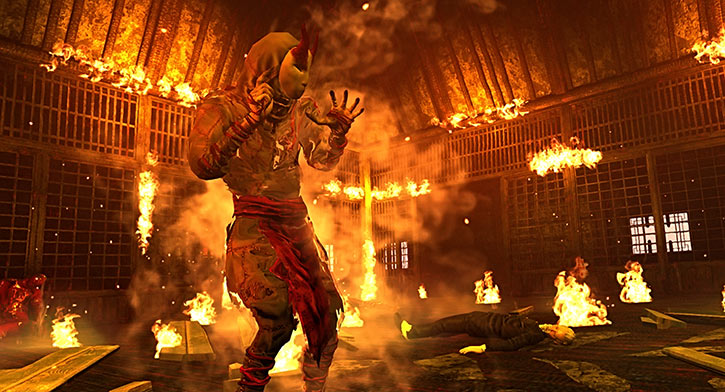 Wang is a cocksure young tough.

He’s also daft, gullible, self-centered and incurious. Though the latter keeps him focused on his job.

If he weren’t such a gifted fighter, he’d have ended up dead in a gutter a long time ago.

On the other hand, he collects comic books. So there’s that. He’s a general nerd, also fascinated by action movies and video games.

For all his talk of wang, Lo Wang seems to have little interest in romance. Or human relations in general.

He seems unengaged with the world and prefers his fantasies. That tens of thousands have presumably been killed by demons doesn’t draw any reaction from him. He just wants to play-act a super-badass survivor, chopping demons to bits.

This may be in part caused by the axioms of his world, where life is cheap and women barely exist.

On the other hand, Hoji clearly sees Lo Wang as a pathetic, mass-murdering waste of skin. 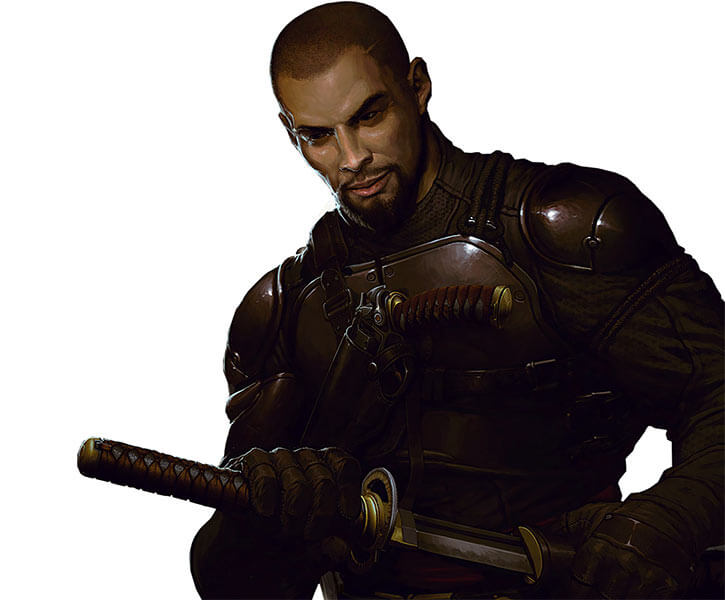 “Who wants some Wang ?!” (his catchphrase and the apex of his wit)

“Always bring a katana to a gunfight. And also a gun.”

(After vanquishing a group of demons) “I guess that was too much Wang for them to handle.”

There’s a *vague* implication that the other two “shadows” of the Nobitsura Kage exist in slightly different realities.

Lo Wang comments that something feels off about the Zilla dockyards of Chapter 7, and doesn’t recognise the shotgun model he finds there. It also seems to be further up the timeline, perhaps the 1990s.

Thus, Lo Wang might be travelling the multiverse without realising it, using the Shadow Realm as a nexus.

(Perhaps it’s explained later in the game – I had to stop at Chapter 7).

One simple use for Lo Wang is as a mob enforcer, who’s more dangerous than he seems. He’d have obtained some demon/chi abilities through blind happenstance.

Or, like in the game, he could be a villain who accidentally ends up fighting an even worse threat. 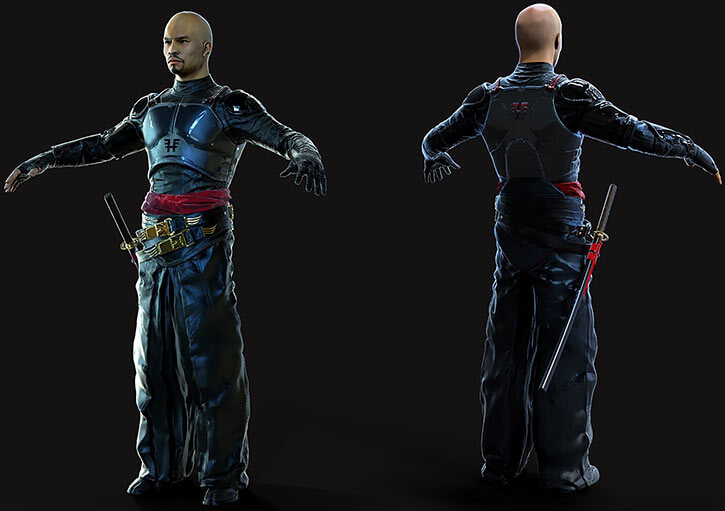 Power Loss. Lo cannot engage more than 4 APs of Martial Artist when not wielding a sword. 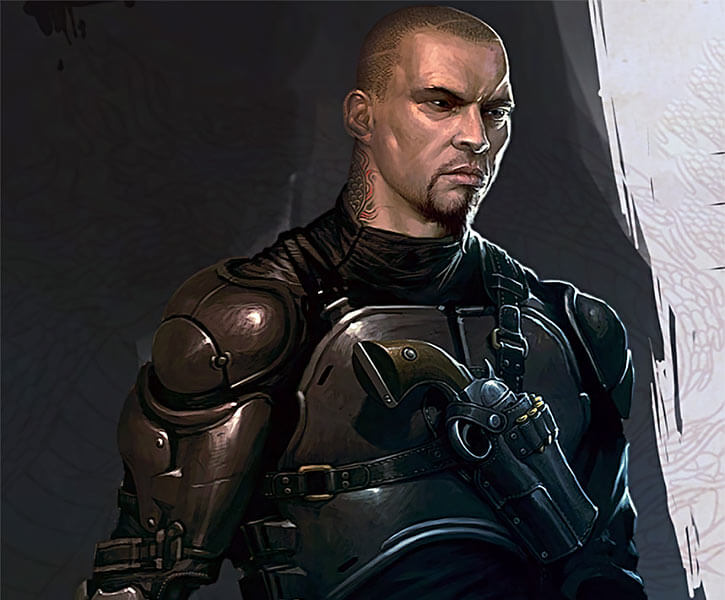 The body armour is simply an additional, depleted-first health score. I’d imagine it was a wink toward 1990s video games, as with much of SW2013’s material. It may thus be written up as [BODY 05, Blunting: 02, Damage capacity: 03, Bonus: Damage capacity has Full Recovery With Infrastructure].

I’m mostly using the crossbow as a precision opener. Something like [BODY 01, Projectile weapons: 07, Ammo: 01, Limitation: Power Loss (Projectile weapons drops to 05 when not doing a Blindside Attack)].

The game has skill trees of sort. Using these, Regeneration can be bolstered up to 08, and to only require one Dice and one Automatic Action per phase. This seems to be a common early power investment.

The health recovery on chi strike swordfighting power is a critical ability in SW2013. But in DCH terms, I’d assume it’s instead part of melee OV. Wang’s high OV in the stats block is based in part on the notion that this skill gets picked ASAP.

His Martial Artist rises even higher, especially if one focuses on the swordfighting skills (which seems to be a common choice). The Power Loss doesn’t budge, though.

As he trends toward Martial Artist: 09, Low Wang can thus deploy a high EV with his sword. This is important, as higher-level demons have robust RVs, making them too difficult to engage with small arms.

(It is a damn high score – but then he’s half-possessed by a demon endowing him with magic powers, so…)

The Nobitsura Kage starts circa [BODY 10, Enhance (EV): 02 (cap is 09), Descriptor: Slashing, Piercing]. The BODY and cap are increased as the three component blades are merged.

The Luck Advantage is inspired by the found-money-increasing skill that some players take early on. But mostly it models die-and-retry gameplay.

The Magic Blast Power assumes that the path-blocking magic statues have an Attack Vulnerability against Mystic-Linked Damage. So you could blow one up with a rocket launcher, but a chi strike works better.

Having two types of shuriken is to avoid an overly fiddly, low-APs Combined With setup. They’re usually used to stagger, but sometimes they’re used as range EV in a pinch. They’re the same Gadget, but with two “settings” depending upon intent.

There’s a weak case for Mistrust. He is a wanted criminal, for entirely justified reasons, who randomly ends up fighting to benign ends.

Source of Character: Shadow Warrior (2013 video game). Some of the illustrations are from the Artstation page of Pawel Libiszewski  , the studio’s art director.