Shadow Boxer can travel long distances by entering and exiting via shadows.

He’s a highly trained fighter, able to deal with most opponents.

If faced with a number of armed opponents, he makes sure to attack in a shadowy area. He’ll then move around and force them to risk attacking each other.

Born into an English mining community, Terrance could never please his abusive father. When his father was trapped by a cave-in caused by his own incompetence, Terrance, barely in his teens, was approached by Mr. Goode of the Hierarchy. He was offered the ability to rescue his father.

Terrance accepted, and soon found himself able to teleport via shadows. He easily rescued his father, who decided Terrance must be evil. When his pregnant mother tried to intercede, his father punched her in the stomach. Terrance snapped at this, beating his father to death.

After a period as a professional boxer, Terrance was called on by the Hierarchy to fulfil his end of the bargain. He thus travelled to Bête Noire, one of three cities which shape the world. 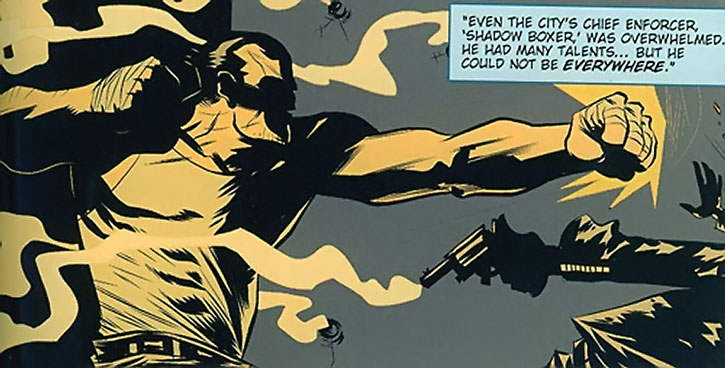 There he became the Chief Enforcer. He carryied out the wishes of the Magistrate, Doctor Juris, and kept such peace as was wanted kept in the city. He also met and began a relationship with Black Mariah, the city’s information broker.

When the Fallen Angel arrived in the city Boxer soon took a dislike to her, especially after she hurt Mariah. But the few times he tried to take her on, she easily bested him, throwing him about as though he were nothing.

He also became irritated at Juris’ lack of interest in dealing with her. Especially after the Hierarchy made it clear that they wanted her gone.

When Mariah deduced that the Angel’s defences only worked when she concentrated on them, Boxer saw his opportunity. Learning where the Angel lived, he snuck in and hid in her closet for hours until she returned home.

Exhausted from a fight with one of the Hierarchy, her defences were down. Boxer thus managed to land a solid in her gut. Before he could finish her off, he realised that she was pregnant, and remembered his father’s attack on his mother.

Rushing Angel to the nearest hospital, he was told that she had lost the baby. Devastated and seeking someone to confess to, he went to Doctor Juris. He told him what had happened, unaware that Juris was the father. Enraged, Juris drew his gun and killed Boxer.

Straightforward in his approach to problems, Boxer doesn’t always get, or care about, the complicated, subtle situations around him. He adopts the simplest method to achieve his goal. Uninterested in the why of things, he applies simple proletarian rules.

He is conscientious at his job, believing strongly in responsibility and family.

While he often throws his weight around to maintain the peace in Bête Noire, he isn’t needlessly brutal. But he does have a quick temper, and holds grudges for a long time.

If someone poses a danger to the city or his loved ones, however, he doesn’t hold back, removing the danger with an efficient brutality.

He speaks with a strong lower class English accent and diction, and uses “bleedin’” as punctuation.

“Magistrate, with all respect, I’m your main enforcer. Lemme do my bleeding job.”

Juris: “Boxer. Did something happen with you and the Fallen Angel ? After I told you not to try to kill her ?”
Boxer: “Yeah.”
Juris: “That something being…?”
Boxer: “I tried to kill her. I figured she was still a danger to you.”

“Gave ’er a Shadow Boxer one-two. Gut punch, head punch. Was the gut punch what did it.”

Bonuses and Limitations:
Teleportation only works between shadowed areas (-1).

One of three such cities around the world (another being Babel, the City of Fire and Life), Bête Noire is said to shape the world, events taking place in it echoing on a global scale.

Seeming to possess some form of sentience, the city decides who may enter and leave it, and prevents those it still finds useful from dying or aging, even speeding their recovery while they sleep.

In game terms, its special citizens might have Slowed Aging, up to 10 APs of Invulnerability and up to 06 APs of Regeneration (only while sleeping or unconscious, cannot regrow limbs and organs). The APs are attributed at the whim of Bête Noire and can (and do) change at any moment without warning.

On the other hand, most people with this Advantage (even if it ends up not giving them any benefit) cannot leave Bête Noire. The effects may vary, from an impenetrable invisible force wall, to being teleported back into one’s home, to getting lost and finding oneself in Bête Noire, etc.

Again, the city decides what happens. For instance Black Mariah can leave at will, but Asia Minor will just get teleported back to the cemetery. There is no correlation between how favoured the person is and how hard or easy it will be to leave Bête Noire. One general principle, though, seems to be that it gets harder to leave the longer one has been in Bête Noire.

The Citizen of Bête Noire Advantage also entails the ability to navigate the city without getting lost. Newcomers will routinely have to contend with impossible topology, such as a straight street which ends at the same point it starts. 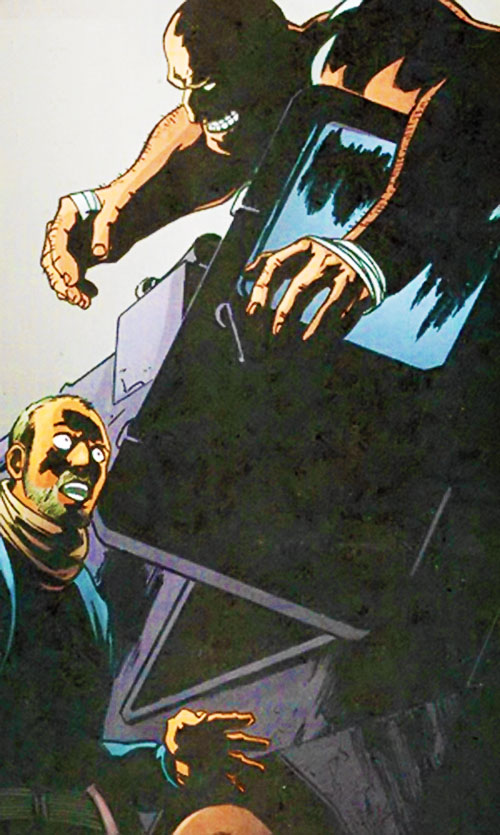