Shadowmage is an alien rune mage. By inscribing and pronouncing mystical runes (often writing them in the palm of her right hand), she can cast any needed spell, from eldritch blasts to invisibility. The rune also appear on the target, as relatively small shapes in green flames.

She can trace runes on her teammates, or give them spellcards. See the Ærwan pictograms entry for most of the runes used by Æra.

She is also nimble, and can hold her own in close combat. But she rarely has to – Shadowmage can jump out of the way of an attack with the best of them.

As often with magicians, she’s also remarkably perceptive and intuitive.

Shadowmage is a battlemage from a planet/dimension called the Wold. It is torn between two warring races, the Ærwan and the Darkur. There are other, even more powerful entities on the Wold – such as the Vyr, virtually invincible mage-gods.

Shadowmage was sent on an extremely dangerous mission against the Vyr, in order to steal a godlike magical artefact from them. Her target was the Vorlexx, which looked like a gemstone.

The Ærwan leaders hoped to use its mystical might against the Darkur. Æra would then return the artefact to the Vyr before they reacted too badly.

Shadowmage was the very first person to survive the Vyr’s defenses and to actually make it within their sanctum. She did manage to steal the Vorlexx, and even killed one of the Vyr by wielding the Vorlexx against it. In so doing, she came to realize the huge mystical power of the artefact :

So she fled to another dimension, where she intended to bury the Vorlexx.

Run to the hills, run for your lives

She arrived on Earth shortly after World War One, and buried the gemstone in a village south of Paris. Meanwhile, the Wold erupted in all-out war known, the Tch’al Conflict, over the theft of the Vorlexx. Solution member Outrage fought in this war.

Æra stayed on Earth, joining the local occult community as a visiting student. She only occasionally encountered other travelers from the Wold. It was while she was studying in a major mystical library under London that she met Lela Sho and Troy Wilde. Aera saved both their lives from the assassin Casino.

Shadowmage discussed with Cho, who wanted her to join her crusade against the Dragon Fang. She performed a divination and saw her fate was to join the Solution. They needed her and she needed them, especially as they could allow her to survive the Vyr.

Part of the Solution

Shadowmage fought along with the Solution. It did allow her to survive the Vyr when they finally found the Vorlexx was on Earth and came to track her.

Although the Vyr took both the Vorlexx and Æra (in order to torture her), the Solution and the Man with the Harmonica freed Shadowmage and escaped with her.

Shadowmage is still a part of the Solution.

Shadowmage is a competent, collected adventurer with a matter-of-fact attitude.

She deeply believes in fate, and often uses divinations. Since to her eyes most things are preordained she rarely seems surprised or shocked. She reacts to most things with calm and confidence. About the only thing that can faze her are exceptionally powerful entities such as the Vyr or Rex Mundi.

She has something of a regal bearing and attitude, like a princess in exile. Yet when she feels comfortable, she sometimes giggles like a Japanese schoolgirl.

She became a friend of Tech and, by extension, Dropkick.

“The forces of fate are in motion and we can’t resist. Our pasts are driving us together, into the future.”

The Solution can exist in nearly any super universe, provided you have can access to cybernetics (something like Nuware or Spiral’s Body Shoppe) and some aliens are around. The team is relatively independent from context.

They’d almost make a perfect PC team if the aliens weren’t much more powerful than the humans. 🙂

Also, as a mercenary team, they can credibly appear anywhere and work for most everyone – a boon in many campaigns.

Bonuses and Limitations:
Spells already cast via Sorcery fail if Shadowmage take RAPs in any of the three Resistance Attributes (-2). 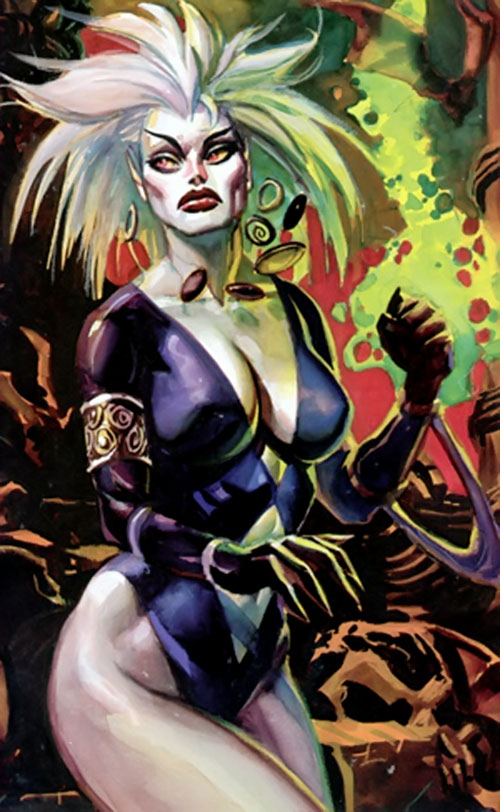