The nature of Jillian Woods is unclear. She’s reportedly a “shade”, but the word seems to refer to a category of magical beings rather than a specific species. As far as we know she is a rekindled human soul that occupies the shadow of what was once her body.

However, Jillian can turn into a living, breathing woman whenever she wants and for as long as she wants. She seems to have a normal body working in all the usual ways when she does.

When she assumes her natural shadow form, Woods can :

Her form is usually the shadow of a human woman. But she can expand to become a much larger, amorphous volume of Darkforce .

She can slip through strong binding spells that should be able to hold a creature like her.

Another stunt is to diffuse Darkforce into the body of a supernatural creature such as an undead animated by the stuff, to reinforce them. However that requires Woods’ full concentration and she’ll usually ’ride‘ as an intangible shadow within the creature she’s feeding when she does that.

Dr. Druid referred to this as “compress[ing her] shadow into a minute pocket of non-being [which would] effect a trans-temporal null-space”. Whatever that means.

In DC Heroes RPG terms it is possible that Shadowoman has some sort of Darkforce-related Omni-Power. If so Druid fed her Hero Points  through Leadership so she could actually use it. The stranger applications of her properties were all performed under direct instructions from Druid and conveniently matched the problem at hand.

Love of the common people

Woods is somewhat charismatic and seemed personable, but she has a terrible track record when it comes to friendship and romance.

There seems to be some odd property about her that pushes people away. This apparently was the case even before she became a shade. It is possible that this is tied to a previous life of hers – perhaps one where she had magical powers.

Whether animals react strangely to her is unknown, but is certainly possible.

Jillian Woods had an unremarkable life, marred by poverty and difficulties in establishing lasting links with people. As a child she had more imaginary friends (named Annandale and Tennyson) than real ones. Her father left with another woman, leaving her mother to struggle with constant financial problems.

Woods drifted away from home as she hated the sort of men her mother was dating. She had a long string of short-lived minimum-wage jobs, usually getting fired for disagreeing with her manager. However she did qualify for financial aids to go to college, and enrolled at the USF .

Her student life was mostly spent partying, drinking and chasing men. But her above-average intelligence allowed her to graduate anyway.

Of the occult and taste in men

Some years before, one of the flakes her mother was dating had given her New Age stuff such as tarot cards and crystals. Woods felt a connection with those and developed an interest in the occult. Thus, when Dr. Anthony Druid came to the USF to give a lecture, she attended.

They were instantly smitten with each other, and Druid determined that they were the reincarnation of a couple. In their previous lives as an English noblewoman (Druid) and a wandering Celtic alchemist (Woods), they had shared a romance during the reign of King Arthur.

The alchemist was found and slain by the brethren of the Englishwoman, but swore with his dying breath he would find his love again in another life. Soon, the present-day Woods and Druid (re)started their relationship, and she came to live in his place in Boston.

The transmigration of Jillian Woods

Jillian insisted on accompanying Dr. Druid during some of his outings, though her lover was concerned about the risks. While recovering artefacts, she tripped a mystical ward and was killed by a demon.

A small spark of life remained. Refusing to see his lover die and full of hubris, Druid used his mastery of the unknown and a nearby mystical statuette, the Bride of Slorioth, to fan that spark. Once this bit of life force was stable, Druid transfused it into Woods’ shadow.

Woods’ thus didn’t pass on to the afterlife – and to keep her going Druid tied her soul to his.

When Jillian awoke, Druid lied to her – as he does. He told her that he had repelled the demon in the nick of time and the attack had somehow given her shadow powers. Unbeknownst to Woods, Druid often “stored” her in the statuette, releasing her to serve him like a genie when she was needed or wanted.

Some time later, Druid assembled a team known as the Shock Troop to help him police occult threats. Jillian was a member and made herself a super-hero costume obviously based on the original costume worn by Spider-Woman (Jessica Drew). She took the name Shadowoman. 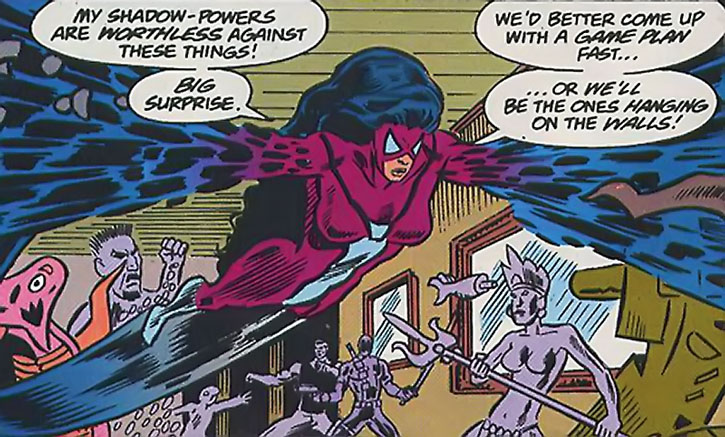 The other two members were N’Kantu (aka the Living Mummy) and John Scully (aka the second Blazing Skull).

The Shock Troops was seen but once. It would seem that N’Kantu and Scully’s participation was not wholly voluntary and they left quickly. During that case they fought Darkforce creatures and allied with Quasar and some Shi’ar Imperial Guardsmen ; the Darkforce-powered Shadowoman found these creatures easy to handle.

After Dr. Strange cursed Dr. Druid to take up his duties as protector, Druid assembled another group, called the Secret Defenders. Woods was the founding operative as Shadowoman.

The two men who were in the field with her for the first mission, Deadpool and Cage, were just mercenaries. Druid used a little mesmerism as well as a paycheque to persuade them to take the mission.

When Shadowoman survived a wound that should have been fatal and wondered what was going on, Druid erased her doubts using hypnotism. Though Woods’ doubts about her true nature slowly grew, Druid would just have her absorbed by the statuette, where no time passed, to keep her out of his hair.

Agamotto’s Pale Horseman (later known as Cadaver) joined the Secret Defenders. The other members beyond him and Shadowoman continued to be manipulated into joining for a short while.

All that remains… is a living sepulchre !

One day, Jillian became aware whilst “stored” within the statuette. A demonic-looking shadow giant (actually Druid’s evil nature, which was taking over him) confronted her there. The giant shadow told Ms. Woods that she was actually dead and that Druid was keeping her tethered and manipulated.

These revelations fanned Woods’ anger as intended. As a result she somehow evolved into a different form, changing her name to Sepulcre (or Sepulchre for us European types).

Sepulcre then burst out of the statuette, intending to have a showdown with Druid.

When living with Druid, Woods adopted a distinctive witchy look. She looked all sorceress-like through her choice of accessories, occult symbols and black clothing.

During her early days as Shadowoman she was enthusiastic and somewhat flippant. She seemed confident and light-hearted, and spouted fairly bland super-hero banter.

This was all an attempt at hiding her lack of experience and acumen, though, and not a very good one either. That Woods didn’t quite know what she was doing and missed the extraordinary qualities of a genuine super-hero was visible.

All the lonely people

Jillian’s odd social “curse” made her feel bitter and hunger for affection and friendship. Still, she has her dignity and will not usually come across as needy.

A lifetime of subtle ostracism made her feel a bit off. She also developed a problem with authority as her curse resulted in her often getting singled out by folks in charge as the black sheep.

Her long alienation has made her a sucker for emotional manipulation. Romantic predators can often sense this. She spends a fair bit of time prowling for guys in single bars, and while her attractiveness brings success her overall track record consists of one-night stands or one-week wonders.

Jillian drinks too much, especially when she’s stressed or afraid – and socially. This may be a side effect of spending too much time in bars, or maybe a way to cope with her weird life and the knowledge that she is on some level a demonic undead shadow thing.

(Examining a powerful artefact) “This little thing’s what the fuss is all about ? Not much to look at ! I’ve seen better jewelry at K-Mart !”

Bonuses and Limitations:
Thief is a Powered Skill, is Contingent Upon Dispersal, and only works on Mystical and Mystic-Linked restraints.

Advantages:
Insta-change, Misc.: Shadowoman is not considered to be a living being for most effects that specifically target those. It was also implied she has the Immortal Advantage.

Whenever needed, Druid could have Jillian be absorbed into the Bride of Slorioth. This is a 20-25cm tall golden statue of a woman stepping forward in a long stride.

Once she was in, he could release her with another mental effort, though several hours had to pass between absorption and release.

While within the statuette, no time passed for Shadowoman. In fact she was unaware that she had been absorbed and trapped into the statuette. She is ’stored‘ in there with her belongings – such as clothes, shoes and jewellery.

The magical operation seemed easy – something in the vicinity of full RAPs using Occultist (Identity Artefact) against an OV/RV of 06/06 might be sufficient to learn how to do it without a roll.

However, using the Bride of Slorioth turned out to have subtle deleterious effects – it weakened Druid’s soul and fed the creation of a dark manifestation of his evil, further empowered by Slorioth.

The statuette was presumably not sufficient by itself, though, and the core of the corruption was likely the evil deeds of Druid.

The current location of the Bride is unrevealed. Perhaps it is now in Slorioth’s dimension.

Augmented vitality ● 22 points ● Descriptor: Shade nature
– Enhanced Strength 1, Enhanced Stamina 2, Enhanced Fortitude 4.
– Immortality 10 (Limited 1 – doesn’t work if her link to the Darkforce is severed).
– Defensive Roll 1.
– Feature (Jillian is not considered a living being for those effects that only affect the living).

Whenever needed, Druid could have Jillian be absorbed into the Bride of Slorioth – a 20-25cm tall golden statue of a woman stepping forward in a long stride. Once she was in, he could release her with another mental effort, though several hours had to pass between absorption and release.

While within the statuette, no time passed for Shadowoman – in fact she was unaware that she had been absorbed and trapped into the statuette. She is ’stored‘ in there with her belongings – such as clothes, shoes and jewellery.

The magical operation seemed easy – something in the vicinity of a DC35 Expertise (Magic) check might be sufficient to learn how to do it. However, using the Bride of Slorioth turned out to have subtle deleterious effects – it weakened Druid’s soul and fed the creation of a dark manifestation of his evil, further empowered by Slorioth.

The statuette was presumably not sufficient by itself, though, and the core of the corruption was likely the evil deeds of Druid.

The current location of the Bride is unknown – perhaps it is now in Slorioth’s dimension. 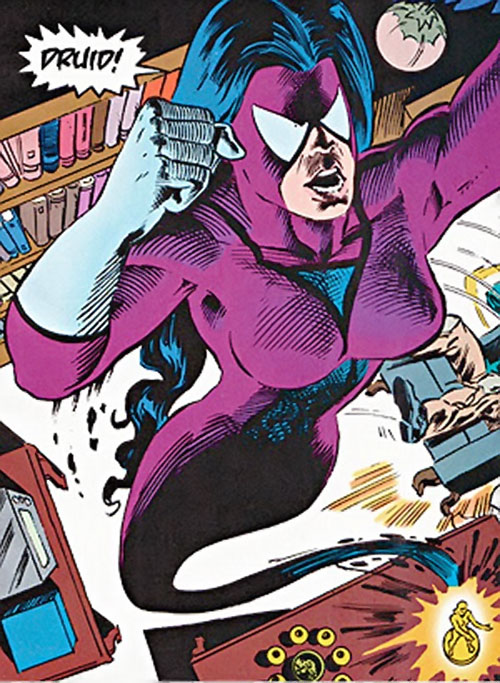