Shaft is a master marksman. He may or may not have a helping hand in the way of the “nu-gene”. He has yet to demonstrate any sort of power other than uncanny accuracy with whatever weapon he uses (his usual weapon being his special bow). Shaft has been able to kill a man by throwing a pen !

In addition Shaft is a master combatant, with multiple opponents not being a difficulty. Furthermore, Jeff’s abilities to lead are second nature. He doesn’t lead by barking orders, he just says what needs to be and it happens.

Shaft is and has been since his inclusion to Youngblood the heart of the team, and has gained international recognition for his accomplishments.

An ex-F.B.I. agent, Jeff was drafted into the now defunct Youngblood government program. That was due to his outstanding combat and leadership abilities, as well as his ability to “look the part”.

Jeff was chosen to replace the unhinged Battlestone after Stone killed someone for disobeying orders. This created an instant rivalry between the two.

With the quick changing in Youngblood’s leadership came a great deal of media attention. Jeff was initially uncomfortable with his sudden transformation into “Shaft”. But eventually not only embraced it as well as proved himself to be the heart of the team.

Shaft wrested control of Youngblood back from the mentally unstable Battlestone and the megalomaniac Tolliver. But after that, he could only watch while the murder trail of Riptide caused the government to pull the plug on Youngblood.

But as most good superhero teams go, this was just a new beginning. New funding was found for the team in the form of a superhero from the Golden age by the name of Waxey Doyle, the Waxman. With Shaft at the helm the two have put together the mightiest Youngblood team yet…

Jeff is a surprisingly easy going yet extremely determined, professional. For a man that was initially unsure of his involvement in the Youngblood program he’s come a long way, to the point of BEING the team.

Although he tends to come off as a serious fellow, he’s quite an easy guy to talk to. He can often be found chatting about the wondrously odd world of superheroics. Shaft often finds himself the brunt of criticism and jokes, as is often the case with being in charge. But he handles it with ease. 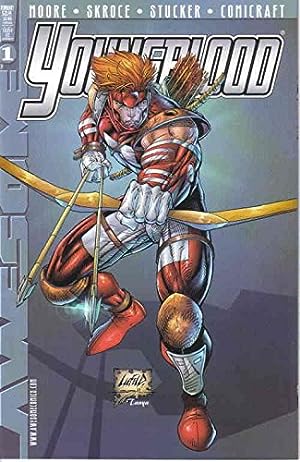