Shape has the ability to stretch and shift his weight from one part of his body to another. These abilities also grant him superhuman durability and strength, as well as speed.

Shape has nothing else going for him, except his powers.

Shape was an Institute of Evil member. When the Institute was first defeated by the Squadron Supreme during the so called ’Utopia Program‘ Shape was behaviour-modified. He then became a full Squadron member. Although his behaviour modification was undone by Nighthawk six months later, he remained loyal to the Squadron. Thus, he opposed the Redeemers.

When the ’Utopia Program‘ was cancelled and a new Squadron took form, Shape joined in. He was, like the rest of the Squadron, exiled to the ordinary Marvel Earth for a long time, but has since returned to his homeworld Earth-S. Shape remains a steady member of the Squadron Supreme to this day.

Shape is a husky man wearing nothing except a pair of blue shorts. His limbs are constantly stretching and his weight is placed around on various parts of his body, giving him a different outlook. Often his legs are given extra weight so that the parts below his knees are broadened and extended in size. This looks similar to Popeye’s lower arms.

The Shape is bald. He often makes childish comments and facial expressions.

Shape is intellectually disabled and has the outlook of a child. He became a villain in order to wreak vengeance on a society that had mocked him. Once reformed, he became friends with people and children everywhere, especially Arcanna’s kids.

This persisted even after he was deprogrammed. Apparently, the Behaviour Modification Machine didn’t really do a lot with his personality.

Despite being like a child in many aspects, he’s pretty tough mentally and emotionally.

He speaks like a child and also refers to himself in the third person (i.e. by calling himself Shape). Likewise he omits the conjugation of the verbs “to be” and “to do” when speaking. That gives his speech a childish outlook as well.

The Shape is a pretty likeable character for whom it’s easy to feel sympathy. Although friendly towards everyone, his best friends in the Squadron seems to be Haywire.

Shape would clearly, although he’s not as clever, be a formerly villaneous counter-part to Elongated Man, or perhaps more adequately to Plastic Man. In such a case, Shape would have been a Detroit JLA villain (low-level, era of “relevance in comics”), who turns out to be the near-monstrous creation of some evil scientist.

He later would have joined the team itself, because, hey, with Vibe and Gypsy around, who would *really* notice…

It could, of course, also be interesting to put the old JLA against the Squadron in a dimension-crossing adventure. In such a scenario the outcome of a fight between Shape and his counterpart is uncertain, since Shape is tougher and stronger, but slower than his counterparts.

* Without Defensive Roll
** With Bulk Up

His offensive PL is set by his tremendous grabbing ability.

Shape has many layers to his defenses. He is naturally quite tough, and his rubbery body easily deflects blunt force. His flexibility also allows him to roll with blows easily. He can also thicken his body, making him more clumsy but also more capable of withstanding great force. 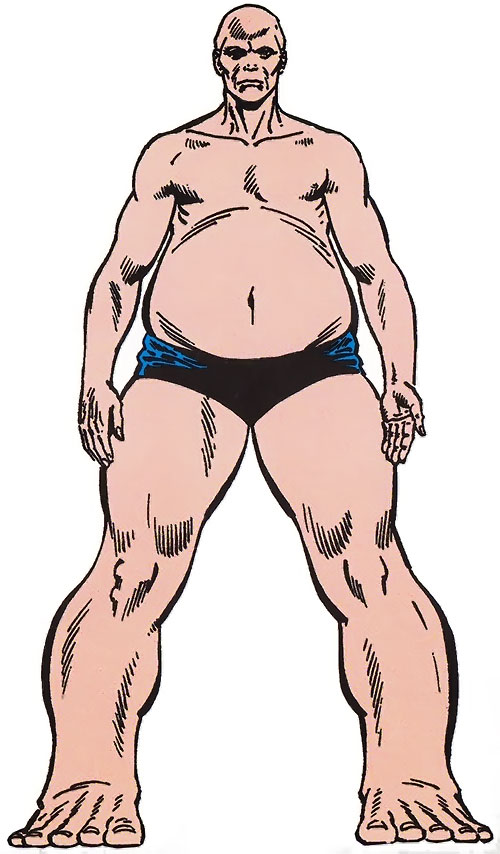 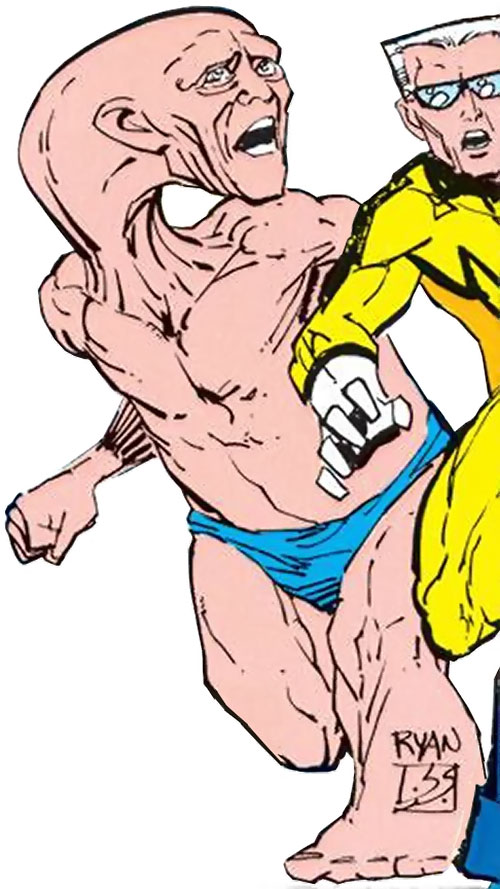