Shassa’s Sigil allows her to draw energy from her opponents, using it to boost her own abilities. Using it allows her to go toe-to-toe with even heavy-hitters like Evinlea or the Lawbringers.

She has a fairly acrobatic combat style. Shassa dodghs her opponent’s attacks and moves quickly to strike them in unprotected areas.

The Sigil also makes her hard to kill, allowing her to recover from seemingly terminal amounts of damage.

A constable on her home planet, Shassa acquired a mysterious Sigil in unrevealed circumstances.

She was later abducted and sent to another universe. Shassa found herself stranded on a planet with 99 other individuals from various parts of her own universe. Residents of the Negation called the cosmos Shassa and the others were from the “Bright Universe”.

One of the powerless prisoners, Kaine, convinced them that they had been brought there for testing by hidden observers. The prisoners agreed to follow his lead. His lead led their captors to bringing them into the prison proper, where they underwent further lethal testing. 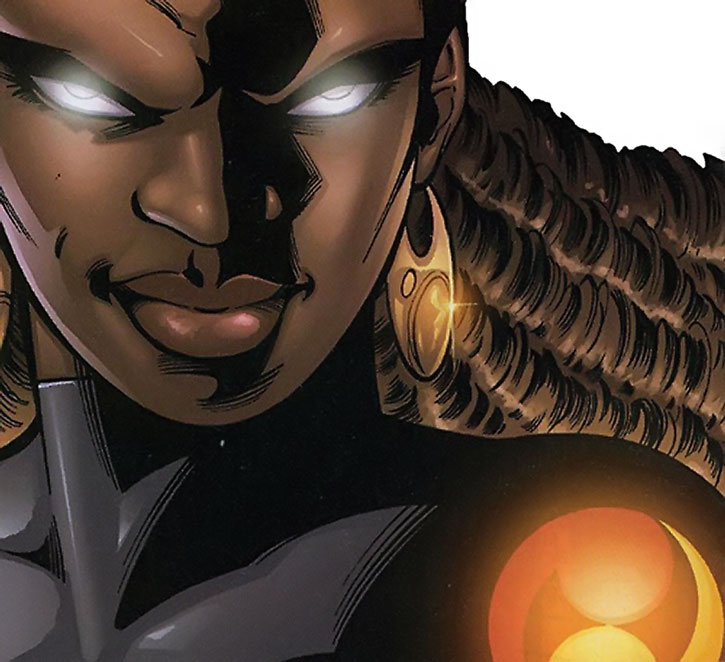 Allowing Kaine to again take the lead, they broke out of the prison. They seized a craft. But it lifted off before most of the prisoners were aboard, its automated systems taking over. Shassa was among those who got on in time.

Days later a group of other escapees stumbled across them on a lifeless planet. Evinlea immediately attacked them for their perceived abandonment. Shassa stepped in, easily handling the godlike member of the First. The conflict was soon ended when cooler heads discussed the matter, and Evinlea blew her own hands off.

Before they could decide on their next course of action, they were attacked by Lawbringer Qztr, one of the elite of the Negation. After easily handling even Evinlea, he apparently slew Javi. Qztr was distracted from killing them when he discovered baby Memi to be completely immune to his attacks, and abducted her, taking her to the Negation god, Charon. 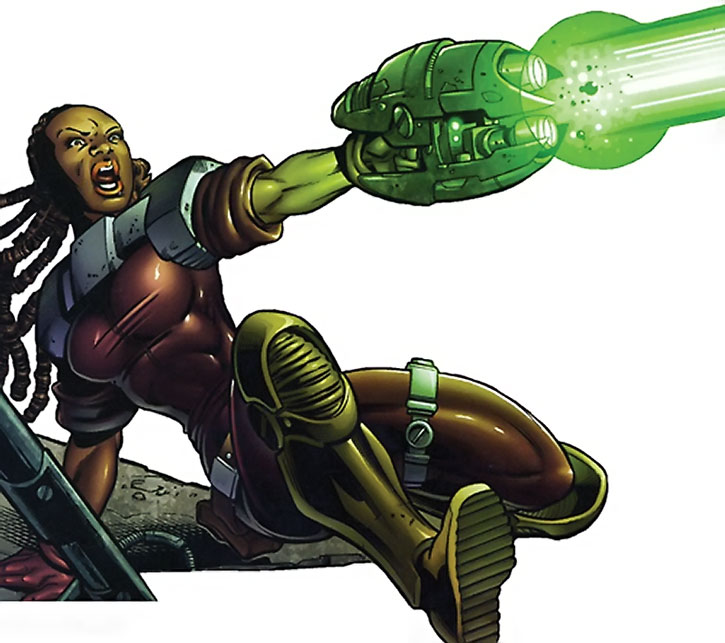 They soon found allies when the Battle Group came under attack from the Australians. Also recently abducted from the “Bright” universe, they had gained enormous power in the transit. The Australians were dedicated to freeing the Atlantean, Gammid, from the clutches of the Emperor Charon.

Kaine’s group allied themselves with the Australians. They used the shell of the destroyed flagship of the Battle Group to slip through the warp gates and charge the Negation homeworld, where they’d learned both Memi and Gammid were being held.

Rescuing Memi and Gammid, although the Australians were killed and Kaine was missing for a short while, the escapees fled the homeworld. They heard from Kaine soon after, and had to race to get to him before the Negation. They rescued Kaine, and he convinced them to try and help free the resistance leader, held in a secure prison facility.

The mission cost Matua his life, further embittered some of the escapees against Kaine.

Shassa, a constable rather than a soldier, didn’t like the prospect of more death in the future. She sided with the escapees who decided to find a quiet planet where they could try and make lives for themselves.

Straightforward and no-nonsense, Shassa dislikes criminals. She tends to be suspicious of most people.

She’s reluctant to take orders from those she doesn’t completely trust, but would be unlikely to question them while in combat, where she does everything she can to protect her colleagues.

“I took a constable’s oath to protect, not to kill.”

Shassa is a member of the Science Police on her home planet.

Using Their Own Powers Against Them

Shassa’s sigil allows her to draw on her opponents powers to boost her own abilities to use against them. She may employ her drain against the targets Physical, Mental or Mystical (although only one category at a time) Attributes or Powers, with the RAPs adding to her Power Reserve (which starts at 0 APs).

These points may then be added to her Attributes of the appropriate category. If she wishes to then switch to a different category, she must lose the points from Power Reserve and perform another Power Drain.