Shatterstar’s original body was genetically engineered to give him enhanced strength, speed, stamina, durability, agility, and reflexes. He is a skilled warrior, capable of incredible acrobatics and amazing swordplay. He has definite regenerative capabilities, and has been able to survive the thrust of his own swords completely through his body.

He is, to put it bluntly, a frightening fighter. But he’s not necessarily on the level of such masters of combat as Wolverine, Deadpool, or Cable – all of whom have beaten him at various times. It may be a simple matter of having fewer Hero Points  than those heavyweights.

Still, he’s easily the equal of such impressive second-stringers as Night Thrasher or Moon Knight.

At need, he possesses a seldom-used mutant power to focus a “vibratory shockwave through the metallurgical properties of his swords”. This is quite devastating, but leaves him weak and drained afterwards. He therefore prefers to rely on his martial prowess.

He apparently also possesses all these attributes in the body of Benjamin Russell (see below).

Shatterstar’s origin is shrouded in mystery and paradox. At this point the story of Shatterstar’s life appears to be the following (it is by no means definite):

Shatterstar comes from a hundred years in an alternate future of the extradimensional planet Mojoworld. It is ruled by the alien tyrant Mojo. There, Shatterstar was genetically engineered to have enhanced physical capabilities so he could serve as a warrior.

(The Beast has claimed that Shatterstar has DNA that is identical to that of the X-Man Longshot who was artificially created on Mojoworld. This seems to be an exaggeration, since Shatterstar does not look physically identical to Longshot and lacks some of Longshot’s superhuman abilities.) 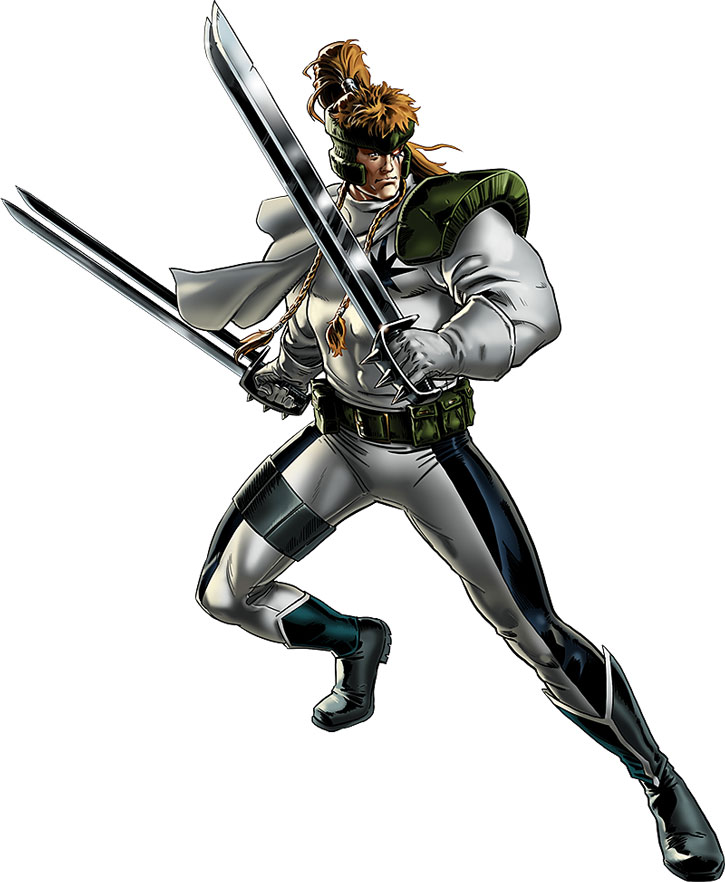 Shatterstar learned the arts of battle as a warrior in arenas on Mojoworld. He was forced to participate in combats staged for Mojo’s television programs. Eventually, he escaped and became a rebel and joined the Cadre Alliance that sought to overthrow Mojo’s dictatorship.

Shatterstar was either teleported or traveled back in time to Earth. He appeared at the point just before Cable reorganized the New Mutants into X-Force. Shatterstar became a founding member of the new team, and his new teammates became his friends, especially Rictor, who became his best friend.

Shatterstar later discovered, to his bewilderment, that he also had the memories of an Earthman named Benjamin Russell. At first, it was implied that Shatterstar was actually Russell, deluded by the Gamesmaster into believing himself to be an extradimensional alien.

But soon afterwards, Mojo sent his agents to make Cable and Shatterstar his prisoners. He then transformed them into digital images in one of his television programs.

I’ve got my Mojo workin’

It was revealed that, 100 years in the future, Shatterstar ended Mojo’s rule by killing him in single combat. That was something Mojo was determined to retroactively prevent.

In the course of the TV show, Shatterstar was mortally wounded. Mojo’s sometime ally Spiral then teleported Cable and Shatterstar back into reality, where they regained their true forms. Spiral brought Cable, Shatterstar, Longshot (who was Shatterstar’s ally on Mojoworld), and X-Force member Siryn to the Weisman Institute for the Criminally Insane in Rutland, Vermont.

There Spiral directed them to the bedside of one of its patients. It was a mutant named Benjamin Russell who had no living relatives. He had been in a coma since his powers first manifested, and, curiously, greatly resembled Shatterstar. Longshot transferred Shatterstar’s “uemeur,” or soul, into Benjamin Russell’s body. The two became one.

Absent with a leave

Apparently Shatterstar’s body merged with Russell’s as well, for the resulting body bore the starburst pattern that Shatterstar had around his left eye. Restored to full health and consciousness, Shatterstar resumed his work as a member of X-Force.

However, this does not explain why Shatterstar had some of Benjamin Russell’s memories *before* they merged with each other. Nor why they looked so much alike. Nor why Spiral seemed so concerned with both boys. There are still mysteries yet to be explained about Shatterstar’s origin, which may now never be resolved.

Not long after this, Shatterstar and Rictor left X-Force to deal with Rictor’s family gun-running business in Mexico. For a long time, neither was heard from.

More recently Rictor turned up as a member of Xavier’s X-Corporation L.A.. And Shatterstar once more was in contact with a reformed X-Force to aid Cable against an ancient evil known as the Skornn (details as yet unavailable).

Shatterstar’s current uniform is a little more practical than his previous ones, though similar in design. It’s mostly dove grey and white.

The MTV  Warrior. Everyone on his team assumes Shatterstar is “all muscle and no brains”, but he has demonstrated on occasion very subtle cunning and awareness that goes far beyond mere intelligence. He has often twigged to hints and clues that pass right by his more intellectual teammates, and has a learning curve far in excess of any other member of X-Force.

Shatterstar learned Spanish in a few days by watching TV, when he thought it may be tactically advantageous. And after having once lost a game of chess to Cable’s sentient computer “the Professor”, he has never again been beaten.

He responds to the amazement his teamates show when he displays unusual intelligence or skills they didn’t know he had with “You didn’t ask.”

Shatterstar lives to fight, but he’s not a maniac (much as Liefeld tried to paint him with that brush). He is a warrior, but to him war is just another game. The better and more spectacular the battle, the more “points” he scores.

Shatterstar maintains the highest level of physical training at all times. He is more than a bit fanatical about it. He also has definite ideas about what a warrior does and does not do, and follows them like a religious creed.

In battle he is without pity and relentless. He will do anything it takes to win the battle. He has been known to run *himself* through to attack an enemy who is disadvantageously placed behind him.

Specter: “In the grand scheme of things, you are but fodder… History will remember you as no more than an individual gun fired on the battlefield.”
Shatterstar: “Little Boy.”
Specter: “What ?”
Shatterstar: “You’ll understand the moment before my blade severs your head.”
(Moments later, Specter lays defeated under Shatterstar’s blade)
Shatterstar: “‘Little Boy’. It was the name given to the atomic bomb that was dropped on Hiroshima. A weapon *can* make history.”

Rictor: “How the heck did you learn Spanish ?”
Shatterstar: “By watching television of course. I thought it would allow us to communicate if necessary, in ways others would not understand — be it our enemies in the midst of battle — or our friends when the topics of conversation are of a highly-personal-nature.”

Shatterstar: “I do not wish to rain on anyone’s charade, but I have been monitoring Prosh’s energy intake.”
Cable: “By all means, Shatterstar, rain on our ‘charade’…”

Shatterstar: “I am glad to finally have gotten to the floor of all this.”
Rictor: “Bottom, amigo. To the bottom of this.”
Shatterstar: “Whatever, Rictor.”

Bonuses and Limitations:
Energy Blast: Fatiguing (-1) and Cannot be Used without a Metallic Medium through which to Focus, usually his swords (-1).

Helper(s): Sébastien Andrivet (for the now-lost v1, which I based my w/u for X-Treme on). 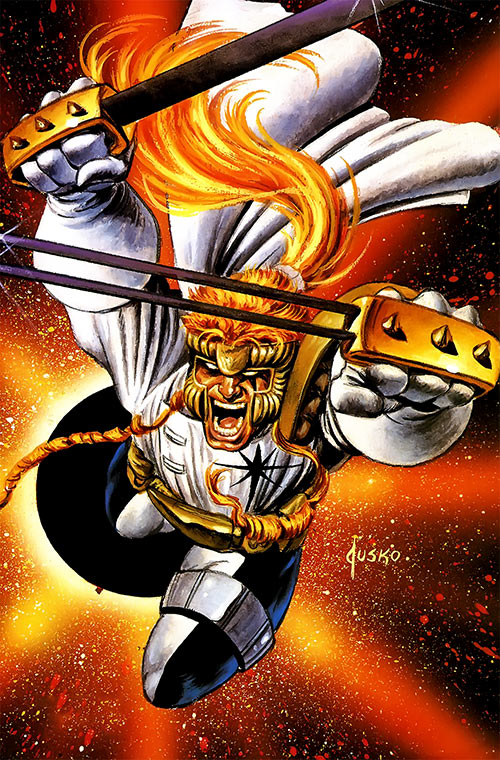 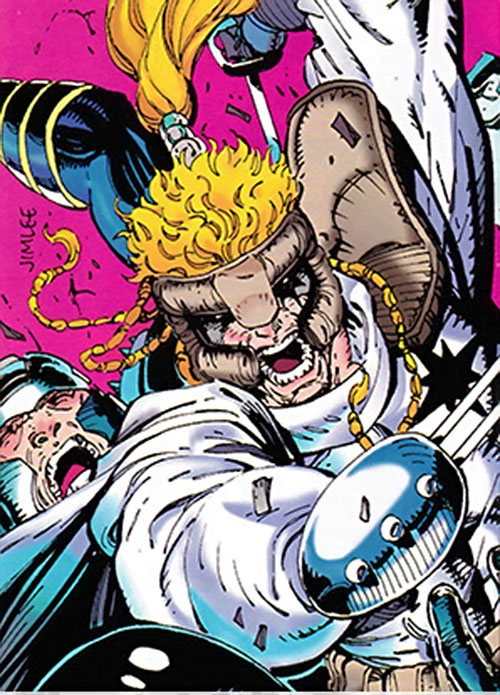 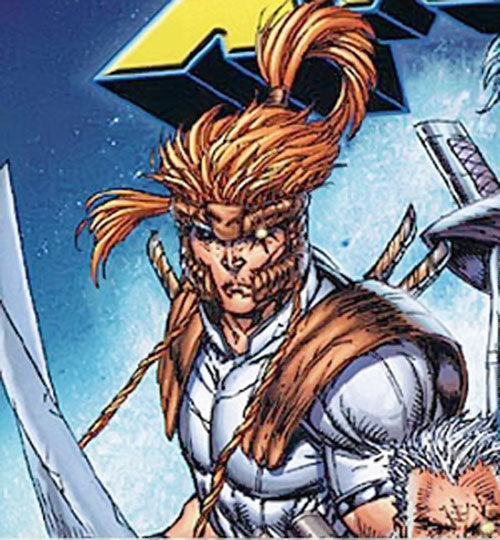 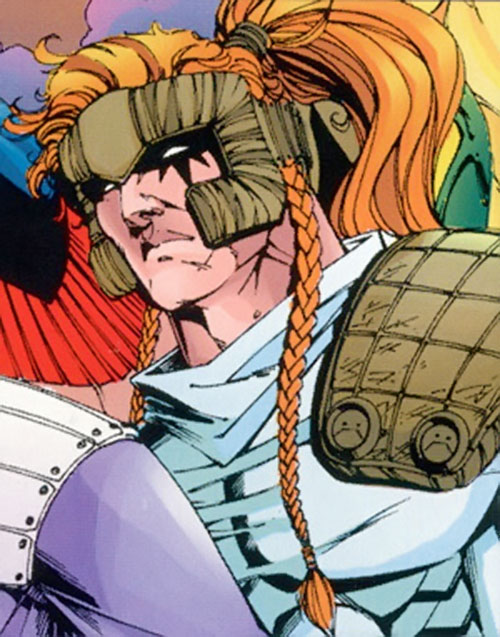 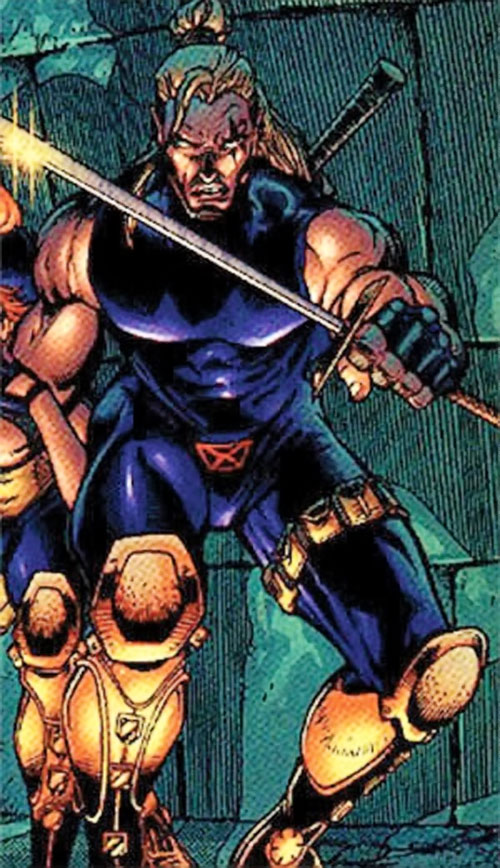 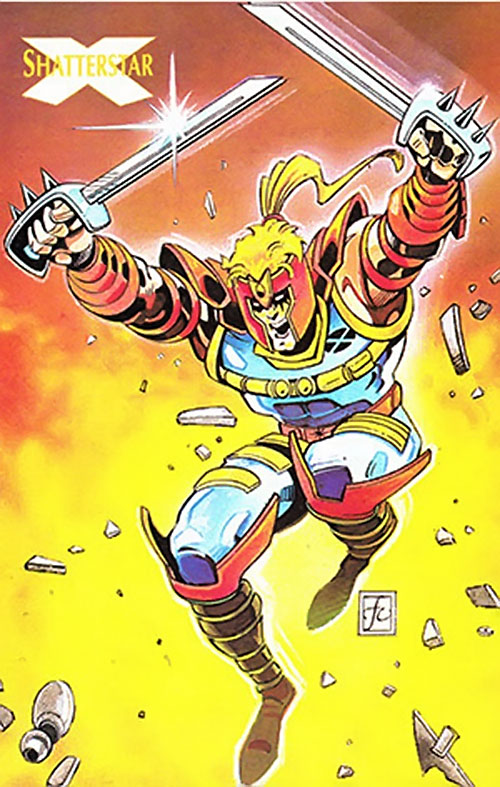