Shawn Michaels is a world class hand-to-hand combatant and an expert in small scale psychological warfare.

He can take extraordinary amounts of punishment and keep coming back for more. He is, however, not superhumanly resistant to damage. He just takes near fatal levels of it before collapsing.

Michaels also emits chemicals that affect emotional responses within the human brain. While he can draw people to him in extraordinary numbers, he seems to take perverse joy in making people hate him. His powers are significantly more effective against women than they are against men, regardless of the target’s sexual preference.

Michael Hickenbottom grew up in Texas. Needing money and lacking much formal education, began training with a man named Jose Lothario. Lothario was an aging bank robber who was recruiting young thieves to help him with a final score to set up his retirement.

Working under the alias, “Shawn Michaels”, Hickenbottom teamed up with Lothario’s other apprentice, Paul Diamond. The pair looted an armored car and got away clean.

Diamond and Michaels pulled a string of jobs together until Michaels dissolved the partnership. He felt that he was doing most of the work and that he no longer wished to split the stolen loot evenly.

Michaels made a strategic call to the local police while Diamond was in the bathroom. He then skipped town before they arrived to arrest his partner. Michaels had left him their equipment, masks, gloves, etc., but none of the money.

Michaels teamed up with another athletic young thief named Marty Jannetty. Together, the two exceeded the success of Michael’s partnership with Diamond many times over. Calling themselves the Midnight Rockers (and later just “The Rockers”), Michaels and Jannetty blazed a trail of small-medium sized thefts, hijackings, and second-story jobs throughout the U.S. and Canada.

They developed a less-than-friendly rivalry with both the Hart Foundation and the British Bulldogs, spending their time trying to beat each other to robbery targets and sell each other out to the local authorities.

Eventually, Michaels’ ego brought even this partnership to a close. Jannetty’s drinking and drug problems caused him to move and react noticeably slower than necessary on a robbery in Tulsa. The pair got away, but was forced to leave the stolen money behind.

After refusing Jannetty’s apology for the mistake, an irate Michaels kicked his inebriated partner through the front window of a barbershop and struck out on his own.

Michaels linked up with a female thief and con artist known as “Sensational Sherry”. Sherry was the first person to help Michaels recognize his ability to control the emotions of others and helped him put it to good use in their various schemes.

She was, unfortunately, not farsighted enough to see the inevitable coming. Michaels turned his power on her, had her surrender her share of the money stolen from millionaire Ted Dibiase, and ratted her out to the FBI.

For the next few years, Michaels operated alone. That is, he operated alone until a museum heist went very wrong. While trying to snatch jewels from an exhibit in New York, Michaels found himself face-to-face with a mysterious man calling himself “The Undertaker.”

The Undertaker, attempting to retrieve an urn of great significance to him from the museum, did not take kindly to the brash interloper. Immune to Michael’s power, he tossed “The Heartbreak Kid” around the museum like a rag doll. He finished Shawn by dropping him back first against a sarcophagus.

Michaels refused medical treatment and tried to continue his escapades at the same level, but realized that he couldn’t pull off the jobs alone any longer.

Michaels first picked up a bodyguard. His level of success allowed him a certain degree of comfort, and he employed a seven foot strongman named Kevin Nash, a.k.a. Diesel, as backup. Michaels needed it since, by this time, he had irritated just about everyone in both the underworld and in law enforcement.

The two of them began working with another pair of professional criminals, a young martial artist calling himself “The Lightning Kid” and Scott Hall. Hall was a career hoodlum who had taken to posing as a Cuban immigrant named “Razor Ramon” to hide from both enemies and gambling debts.

Finally, the quartet befriended a wealthy young man named Hunter Hearst Helmsley. Helmsley was trying to break into organized crime and an alliance with four metahuman criminals with more experience than he had provided him the opportunity. The group called themselves the Kliq.

It thrived until Nash, Hall, and “The Lightning Kid” all moved on to what they felt were greener pastures in other areas of organized crime.

With his superhumanly strong, female bodyguard and several other junior associates, Helmsley combined his power and resources with Michaels’ street smarts, ruthlessness, and experience. Renaming themselves “Degeneration X” based on a column in the New York Post, the trio started over.

They created a gang, recruited some additional members, and began taking over large parts of the criminal underworld.

Unfortunately for him, Michaels had not counted on exactly how good a student Helmsley was. Rather than waiting for Michaels to turn on him, Helmsley had his crew beat Michaels to within an inch of his life. They left him bloody and beaten with his head shoved through the windshield of his own car.

The final beating, on top of his initial spinal injury, left him unable to maintain his high-risk lifestyle without risking permanent crippling.

After drastic spinal surgery, Michaels finally got the hint. He took what savings he had from old jobs, and settled down to raise a family with a young dancer he had met through his friendship with Nash.

Roughly one year after his surgery, Michaels faced a challenge from his original partner, Paul Diamond. Now calling himself Venom, Diamond was looking for revenge for the years he spent incarcerated thanks to Michaels.

Risking paralysis, Michaels took on Diamond. He won, killing his original partner in a bloody fight in an abandoned town in Texas. Michaels emerged from the fight unscathed, but immediately returned to his retirement.

Michaels believes himself to be the best looking man on the planet, and is extremely competitive. Despite his severe back injuries, he has one several occasions risked permanent crippling to prove that, in spite of his retirement, he is still better than everyone else.

Since retirement, protecting his family has become important to him. Despite this, his ego still seems to be his number one priority.

“You know, it’s not easy being me. You know, with the chicks all over me and stuff.”

If taking a young hero or villain under his wing for training, Michaels is less likely to be bitter over his own forced retirement than the other two. But he will be much more likely to push his own agenda (beyond simply complaining or getting on a soapbox regarding his enemies).

He could also play a male Poison Ivy-role against Oracle and Black Canary, well after his supposed “retirement.”

Note:
If Michaels suffers from his MPR during combat, or receives an attack against his Attack Vulnerability that reduces him to negative Current Body Condition, his Physical Restriction may upgrade to Catastrophic and he will lose the use of his lower body.

Prior to his back injury and retirement, Michaels had DEX, Acrobatics, and Martial Artist at 08, and did not have either the Attack Vulnerability or the MPR. 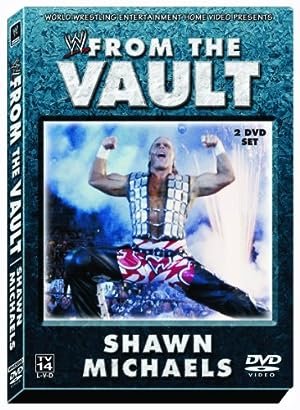 WWE From the Vault – Shawn Michaels 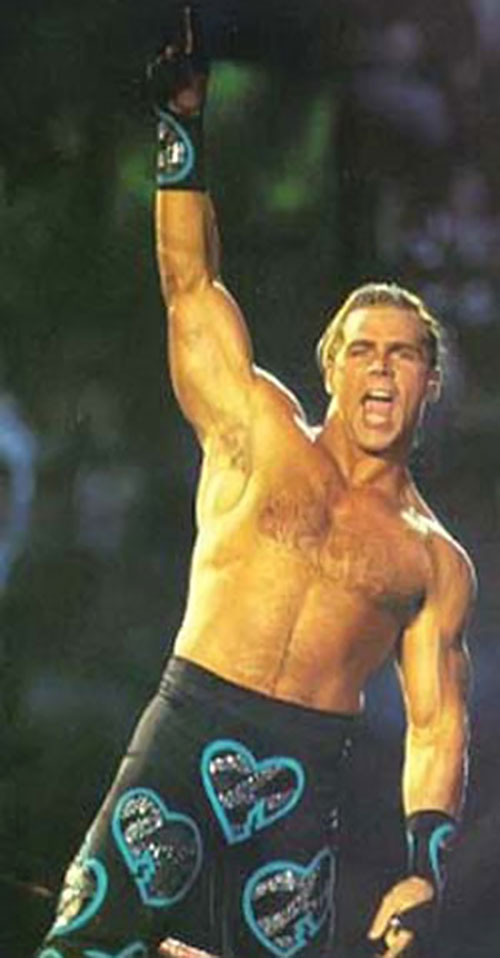 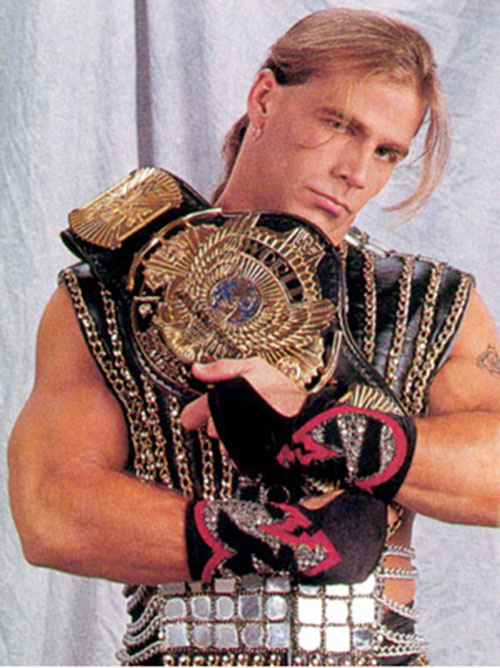 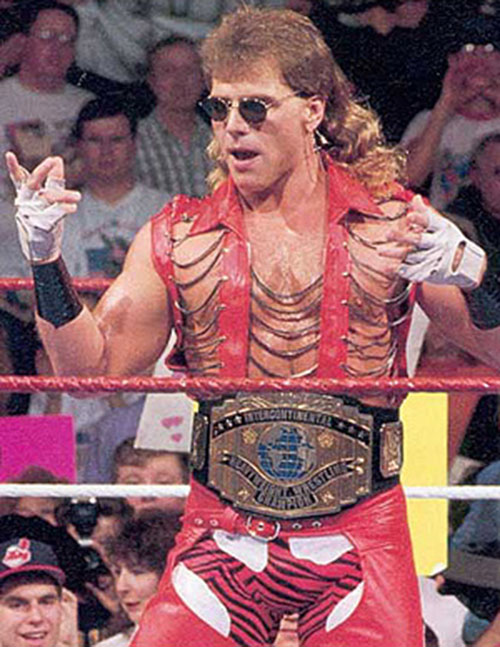