In addition to the normal Morituri physical enhancements, Shear had the power to find the structural weakness in any object and dissolve molecular bonds from up to one meter away.

In combat he typically used it to shear the hearts of his opponents, killing them instantly.

Walther Feyzioglu was working in a Turkish factory when testing revealed his eligibility. He embraced the life of a Morituri with relish and was one of the most gung-ho members of his team. When Radian appeared to have turned traitor by making a Horde propaganda broadcast, Shear confronted him when he returned to Earth and killed him.

He was eventually promoted to squad leader even though he did not want the job, viewing the government as almost as big an enemy as the aliens they were fighting. Still, he did his job and did it well until the day he went insane.

Shear had been becoming increasing erratic and temperamental, constantly proclaiming himself as the best and most powerful Morituri. Unknown to the rest of his teammates, he was suffering from severe paranoia and headaches. He became convinced the other Morituri were the cause of his headaches, that they wanted the glory for themselves and could not stand the fact that he was the best.

Shortly after the VXX199 ship appeared in orbit and during the introduction of Lifter and Burn to the team, Shear finally snapped. He killed Commander Pogorelich, the team’s military leader and fled into a mall. The rest of the team pursued and tried to capture him, but in the end Sensor knocked Shear from the top of the Mall and he fell to his death.

The autopsy revealed a malignant brain tumor, apparently sustained when Backhand exploded to save the rest of the team. Ironically, the first Morituri to kill another died at their hands himself.

A tall, well-built man, his black hair had a white streak in front. He patterned his costume after the Punisher, of all people, complete with skull emblem. However, the body of his suit was blue, not black, and he added gold shoulders as well.

Shear was a somewhat embittered man. Turks were apparently regarded as second-class citizens in Germany where he grew up, and he hated the world government for maintaining the status quo. He enjoyed the power and prestige of being a Morituri and was ruthless in combat, killing his foes without mercy or quarter.

He always kept himself somewhat aloof from his other teammates, constantly boasting of being the best and most powerful.

“A long life without power is meaningless.”

Bonuses and Limitations:
Claws have a slight Range (about one meter) (+1). 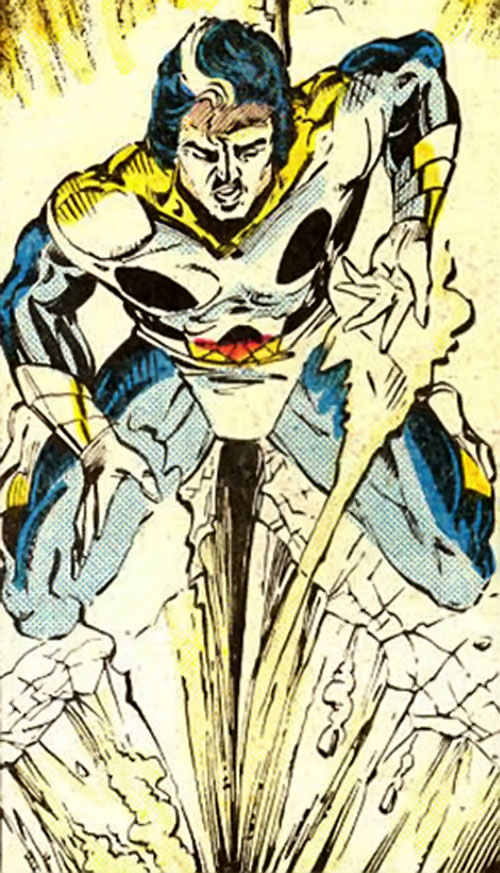