The Sheeda are the main antagonists of the Grant Morrison DC Universe epic Seven Soldiers. This article is a series of stats-then-notes about them, though it assumes that one already understands the Seven Soldiers story.

The best way to do so is to read the comics, obvs. But if that fails, you can read a bunch of related profiles on writeups.org, such as the ones for the Shining Knight, for Frankenstein, for the Newsboy Army or for Mister Melmoth.

Equipment:
The insect riders wear armour and wield melee weapons such as swords, lances and spears, but those are generally irrelevant against normal-size persons.

The Knights ride insects that have Flying: 01 after adjustment for Shrinking.

Notes:
The tiny knights mounted on flying insects are extremely light and quite mobile forces. Some were known to guard the terrible Time Tailor in Slaughter Swamp (being practically undetectable and mistaken for mosquitos even if they got close), and some were part of the raid on the villa of the Undying Don.

Asides from surveillance and reconnaissance, they can be very disruptive against most troops. Especially if they attack at the same time than much heavier troops.

The Sheeda knights traditionally form a double halo around the head of the royals to salute.

Bonuses and Limitations:
Charisma (Persuasion) can only be used on a Controlled person to convince them not to roll to resist. It is instantaneous and silent but has No Range. The Spineriders are very good at using their Mind Probe to find seducing arguments for their Charisma roll, often receiving CSes of OV reduction from those.

Equipment:
The spineriders often have armour and weapons, but those are inconsequential against normal-sized opponents. Their chief tactic is to attach themselves to the neck of enemies, and start riding them around. They can then engage other enemies. No matter who kills whom, they win !

This can also have considerable impact on the morale of opponents who do not realize what is going on.

Spineriders are potent enough to possess even superheroes, such as all the key members of the Ultramarines.

Only two men, heavyweight boxer champ Mo Colley and British superhero the Knight, are known to have repulsed their spinerider. And in both cases they were confronting deeply, viscerally repulsive circumstances (Mo could not harm Lil‘ Hollywood, and the Knight could not betray Batman) that broke the Charisma (Persuasion) hold, *then* received HP helps from other (Mo from Lil‘ Hollywood and Kid Scarface, the Knight from the Squire) to strengthen their rolls to break Control.

Notes:
Spineriders sometimes do reconnaissance. That’s probably on the basis that they are very stealthy and that even one spinerider can inflict a lot of damage on the enemy if it plays its cards right. It was a spinerider that was killed by Teekl right in Limbo Town, to the considerable alarm of the Submissionaries.

It was a spinerider who rode Uglyhead (resulting in the repugnant murder of an entire school’s population). Spineriders were also present during the Harrowing in Manhattan. As noted above, they also played a key role in the takeover of the flying city of Superbia by turning its guardians, the Ultramarines Corps, into slaves of Neh-Buh-Loh.

The corpse of the spinerider who rode Mo Colley has been preserved in a jar and can be bought at Cassandra Craft’s shop.

(Showing the bleeding stump of his arm) “It was I who sheathed shining Caliburn, Majesty. See how I gave my arm for my Queen’s pleasure !”

Notes:
Those degenerate, fanatical shock troops are utterly devoted to the royals. They also seem to fight largely because they are bored and want to kill stuff and experience something. They are surprisingly good fighters and shooters, and their sudden raids can easily be devastating given their firepower. 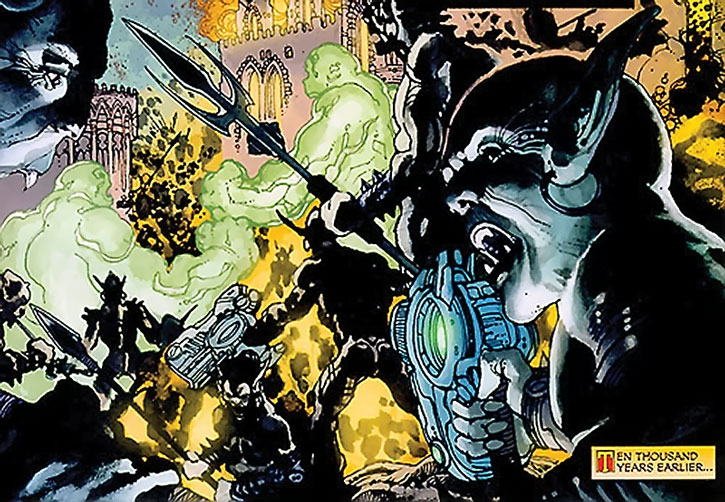 Notes:
Sheeda have various giant spiders, but those ones are huge. They’re about the size of a small elephant, and with a much larger footprint. Neh-Buh-Loh and, presumably, the Queen, ride one. Neh-Buh-Loh was seen to have a guard of undead knights riding buffalo spiders. Those may have been the reanimated corpses of a Camelot.

The Vigilante’s posse tracked down a buffalo spider (which likely served as a bait), which lead them to their death. A previous Vigilante-led posse, a century before, also hunted one. But it seems likely the buffalo spider of a century ago just got lost after having accidentally entered our time through Miracle Mesa.

The spiders are actually artificial. If they get killed, one can see the machinery through the wounds. From the outside, though, they are nigh-impossible to distinguish from real spiders. They even fooled I, Spyder.

They seem to be based on wolf spiders (I think). They thus receive the Giant Wolf Spider Package, which modifies the stats of any spider as follows. Those modifications have not been taken into account in the stats above !

The lycosidæ family is vast, so this will mix up a lot of different species, but let’s not get *too* detailed. 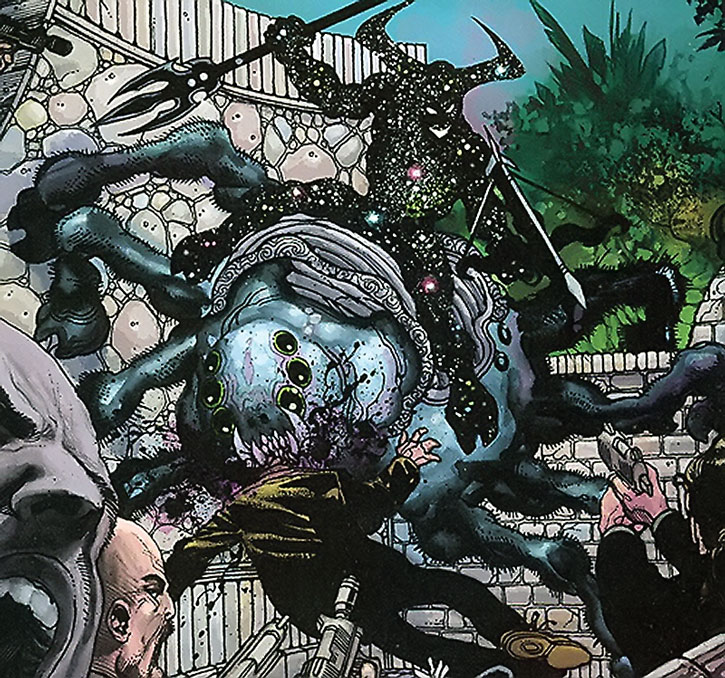 Same as buffalo spiders, but with ’just‘ 4 APs of Growth and the resultant adjustments.

Those mounts seem more common among raiding parties than riding spiders – which make sense, since they, well, fly.

Notes:
Those flies are very docile (Klarion could ride one without any problem, though he does have Sheeda blood). Except for feeding habits and the like do not seem very different from cavalry horses in behaviour. Like the spiders, they likely are extremely realistic artificial recreations rather than actual mutated animals. 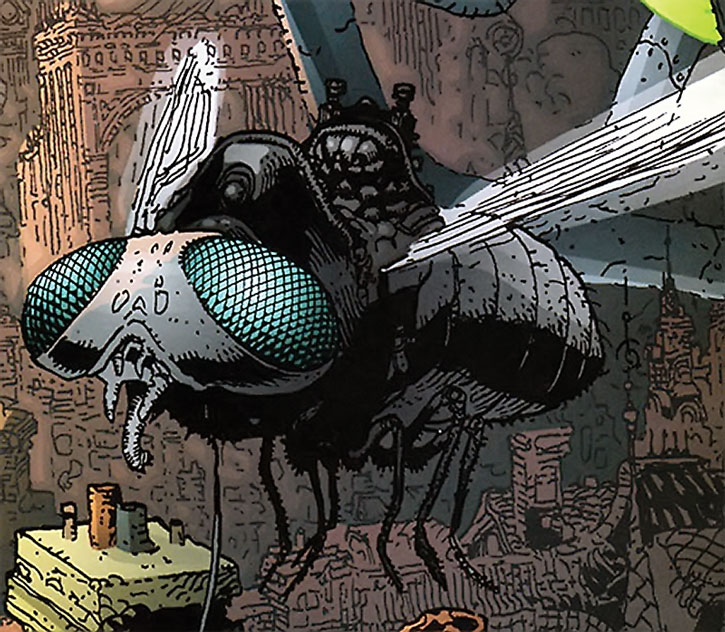 “I am Guilt : a Sheeda Mood 7 Mind Destroyer. Your sword cannot wound me. No other can see me. I kill with words.”

Drawbacks:
Minor Rage, SIA toward pleasing the royals, MIA toward Cruelty, Misc.: Backlash (if the target manages to recenter itself around its values (through meditation, prayer, outside support, an appropriate incident… and a Strenous MIN/SPI roll), then the target can attack the Mind Destroyer using either MIN or SPI as AV/EV, treated as a Mystical attack on the Mind Destroyer).

Notes:
Those vaguely spider-like humanoid are spectral constructs that will follow their targets. No one else can see them or hear them and they are practically impossible to affect.

The Mind Destroyer will then proceed to talk and talk and talk to the victim, crushing it with cruel truths (often acquired through time travel and bringing data from the past and future) and smothering their SPI until they break down and commit suicide. 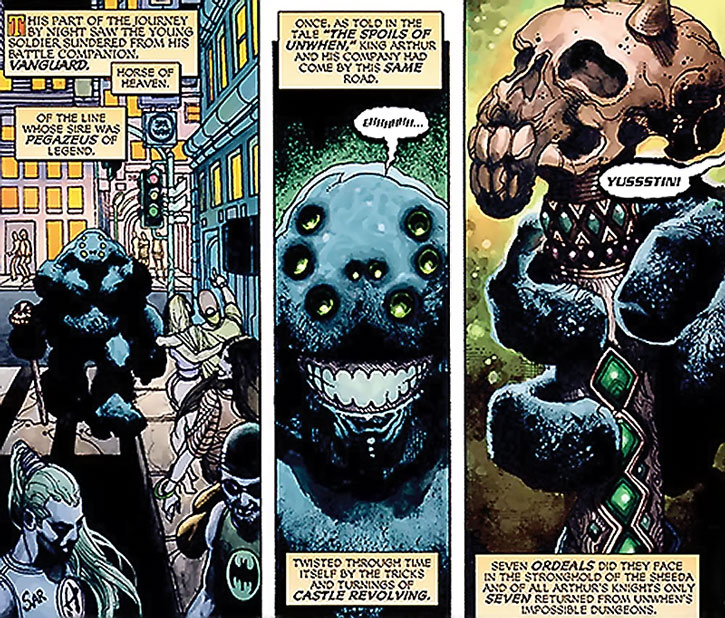 The Maggots were not seen in action much (well, they got slaughtered by Frankenstein… but Frankenstein can slaughter practically everything, so it’s not a very useful fact). Even their nature is quite obscure. Those disgusting creatures feed on dead flesh, and their role seems to be spreading some sort of contagion.

The less mature ones cling to the near-corpse of their victim, teeth sunk into the back of the neck, and force/animate the person to crawl around to carry them. More mature Maggots can move on their own, through not very fast. Theyseem to leave behind some kind of cocoon around the corpse of their victim.

It seemed that immature spineriders (basically vaguely humanoid butterflies, at this stage) as well as ’basic‘ Sheeda troopers (possibly at the maturity of a six-year old) emerged from the cocoons. At a rate of perhaps one trooper and two spineriders per cocoon.

Which would mean the Sheeda reproductive cycle is very, very different from their ancestors. On the other hand, they did seem fascinated by insects and arthropods. So perhaps Maggots and their production are artificially engineered racial variants bred for invasion purposes.

The Maggots were used to invade the school that had been built above the resting place of Frankenstein.

Since the whole thing started with just one spinerider who found a kid with a small degree of psionic  powers, I assume the “early stage” Maggots are actually just that, maggots. In this hypothesis a spinerider can carry several, poison incapacitated victims, affix the small Maggot on their neck and let it grow.

Maggots can grow to near-human size within two or three days max, and start ’reproducing‘ soon after that. The ones at the school were just starting to do that when Frankenstein was awoken, with predictable and highly destructive results.

Melmoth also had a train full of Maggots back in 1870. It is unclear how he got them. Perhaps a found a cache of small Maggots who had been hibernating since the last Harrowing, and who thought he was still King.

He probably wanted to use this incredibly valuable find to start breeding a new Sheeda army loyal to him, potentially taking over the planet if there is a a way to reproduce Maggots from the others. But… but Frankenstein happened. 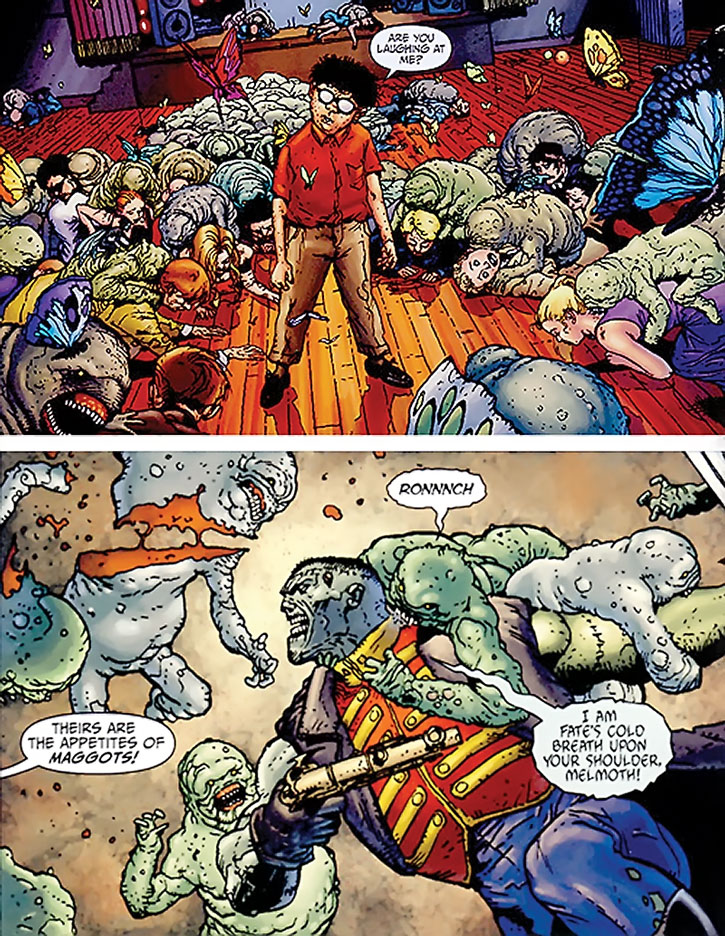 Those creatures appeared during the siege of the Camelot of 8,000 BC, but not during the attempted Harrowing of Manhattan. Thus they are likely, and logically, part of the heavy invasion forces rather than the beachhead forces that were defeated in Manhattan. They are not seen much, and are thus impossible to stat. Do with them as thou wilt.

I remember reading somewhere on the Internet a speculation about the giants being derived from stolen Green Lantern batteries, which is a neat idea. 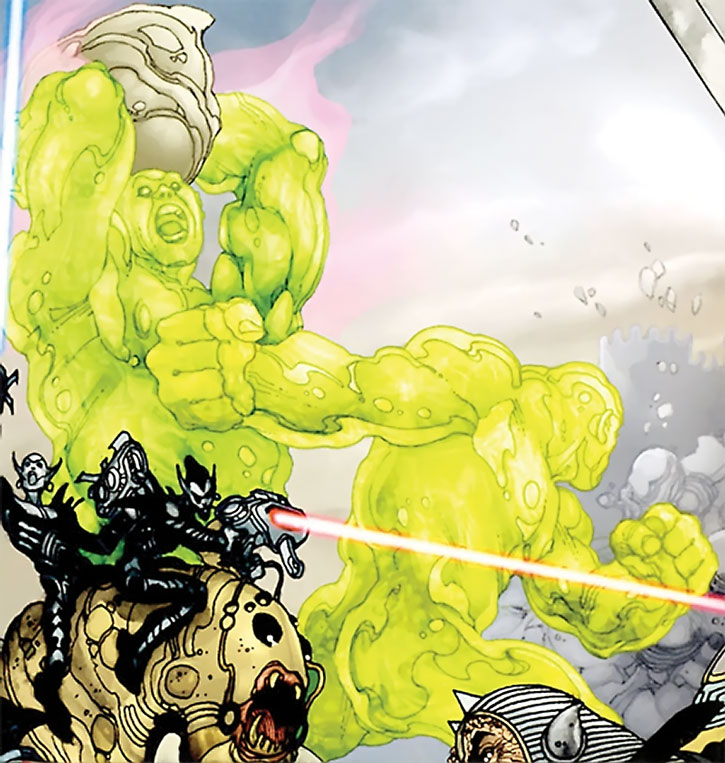 A few giant worms appear here and there among Sheeda troops.&emspBut there is not enough data about them to draw any conclusion. Stats them up as you will. 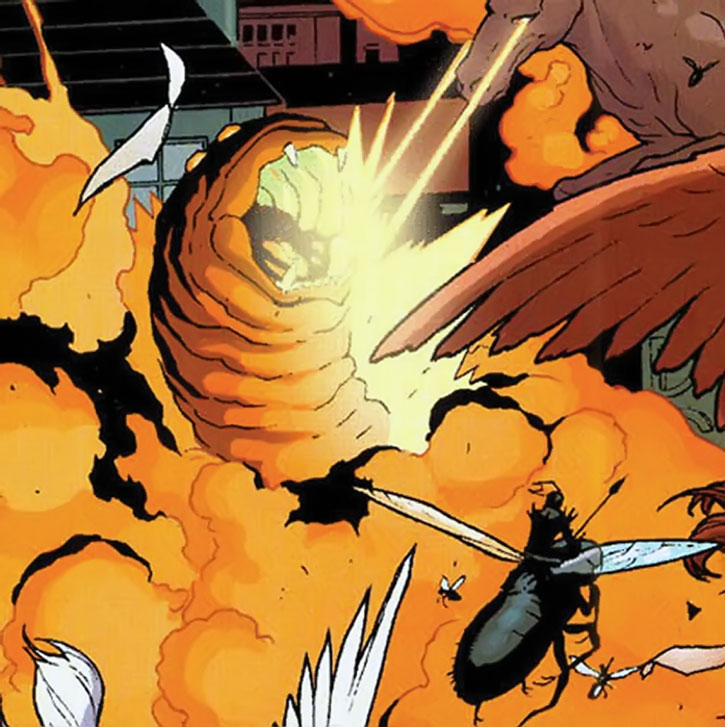 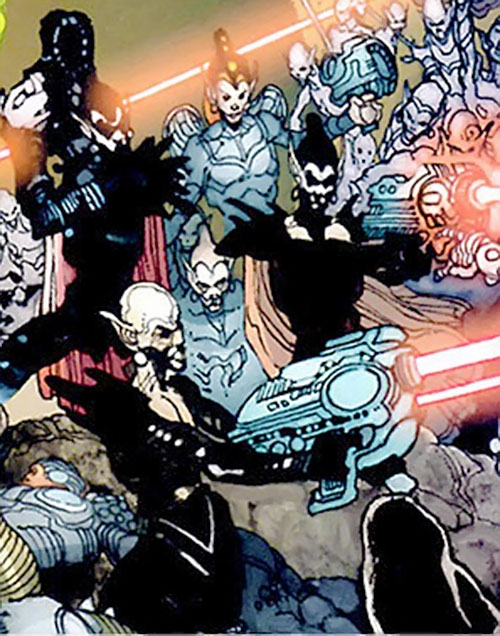 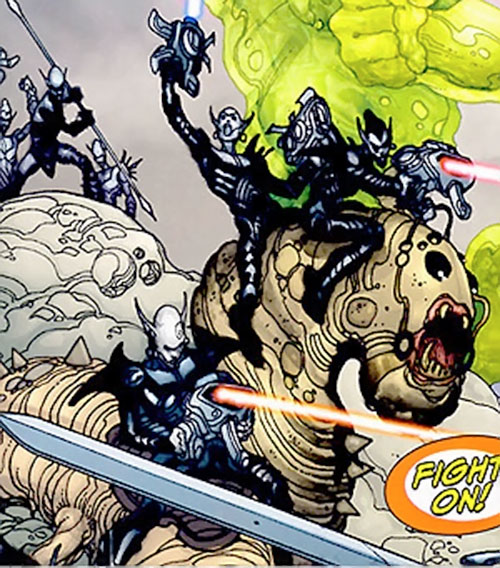 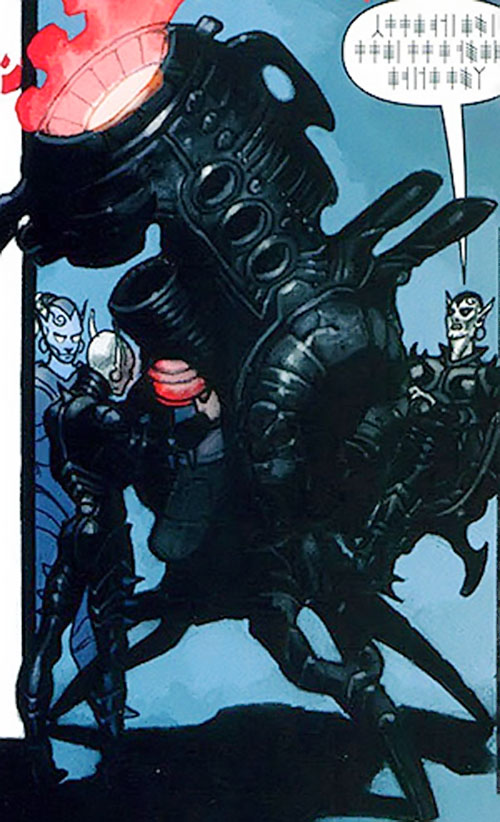 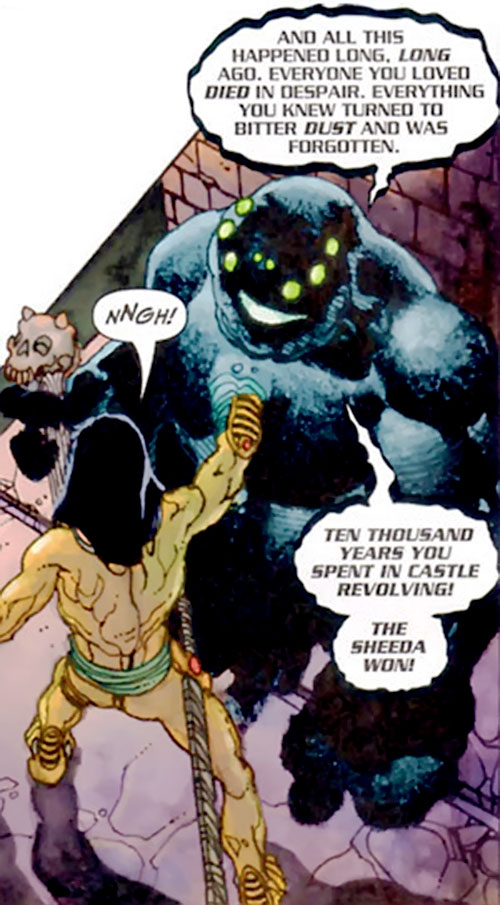 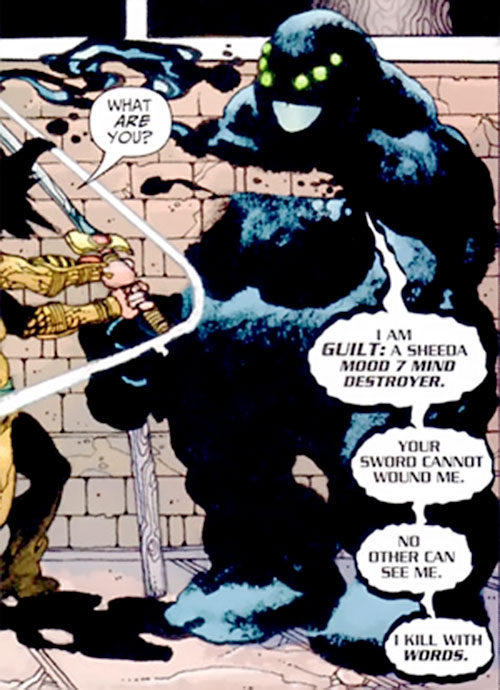