The heroine’s opposite number in Kim Possible. Shego was quite popular among the KP fans.

Shego is an expert thief, martial artist, and stuntwoman. In addition, she has special gloves that glow with green energy.

In her youth in Chicago (or Go City), Shego and her 4 brothers were sitting in their backyard treehouse when a multicolored meteor fell from the sky and levelled house and treehouse alike. It also imbued each of the siblings with a special power.

They dedicated their lives to doing good and so formed the Go Team, headquartered in an island tower in the middle of the city’s harbor. 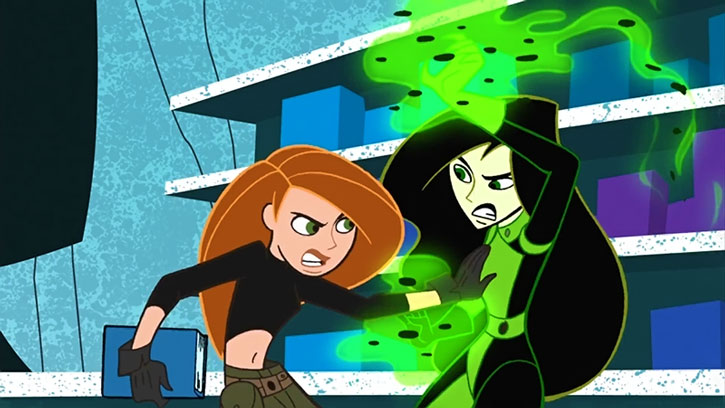 For many years, the Go Team fought evil. But, the more they fought evil, the more Shego liked it — not the fighting, the evil. Eventually, tiring of her brothers’ incessantly hokey goodness, she left the team to strike out on her own. The Go Team didn’t last long without her, all but Hego eventually retiring.

Shego quickly made a name for herself among the criminal element, gaining (in addition to multiple arrest warrants in 11 countries) a reputation for never failing at any task. Somewhere during this time, the villainous Dr. Drakken made one of the few good decisions of his life : he hired her.

While she sometimes works freelance, she currently mainly serves to back Drakken’s not-so-bright plane. One of those led to her first defeat, at the hands of teen hero Kim Possible.

An Eurasian girl in her late teens with very pale skin, green eyes, black hair, dressed in a snappy green and black jumpsuit.

Possibly as a reflection of her power, her skin and hair bear a not-unattractive greenish tinge, more visible in darker conditions.

Sardonic and capable, her only real weakness is her overconfidence. She has trouble believing that she could ever be out of her weight class, and she is frequently quite blunt about her employer’s screwups.

The possibility that this will lead to the termination of her employment, or possibly her life, doesn’t concern her. She’s never met someone good enough to kill her.

She expects to be paid for her services and paid well.

She has shown a couple of scruples here and there, most notably reacting with shock and mild disgust when Drakken plotted to steal Felix’s wheelchair.

She treats her life as a superhero as though it were a Dark Secret, being quite concerned about her reputation as a supervillain if it were to get out. Though given that she could probably take any other villain (save maybe Monkey Fist) in a fair fight, the consequences probably aren’t that bad.

She also has something of a temper, which she’s had to physically restrain herself from expressing on occasion. She enjoys fighting Kim Possible very much – after all, Kim’s probably the only person to have beaten her in a fight. Ron’s pretty much below her notice, though he is a favorite target for snarky comments.

In battle she probably tends to try to take out the most dangerous-looking PC first, fulfilling her thrill-seeking streak and her common sense. If a somewhat less-impressive looking PC has beaten her before, she’ll probably go for him/her with a vengeance.

Outside of her job, she very much enjoys hitting the beach and sunning herself (not that it does her any good), and has a fairly wide vain streak in general.

“There’s a specific no-cloning clause in my contract !”

“Time for your lesson, princess !”

“For a guy who supposed to be a mad genius, I’m not seeing much of the genius.”

Drakken: “I have run a computer analysis of Kim Possible’s life and have calculated the exact day when she will be most vulnerable.”
Shego (impressed): “Sounds smart.”
Drakken: “We must go undercover, using this… (holds up a device) Juvenator.”
Shego: “Juvenator ? What’s a Juvenator ?”
Drakken (turns himself into a four-year-old): “Cool !”
Shego (resigned): “Okay, that just got dumb.”

Er, worked for Lex Luthor ? The green energy is kryptonite based ?

An alternate possibility would be to place her against the Titans, either replacing aspects of Cheshire, or assisting one of the “old school” villains like the Mad Mod or Mister Twister, who she’d be unable to take seriously.

Or just insert Team Go entirely, and have the PCs (as non-capital “o” outsiders) witness Shego’s growing disillusionment and eventual betrayal. While a member of Team Go, she probably fit the Sarcastic Teenager Barely on the Side of the Angels archetype.

Hego was the Red-Blooded All-American Superhero (like a very dense Superman stereotype), Mego was the Self-Absorbed, Self-Pitying Me-Me-Me type (the kind that gets whole pages of soliloquy these days), and Wego was the “Adorable” Brat.

For some reason I want to put her up against Nightwing, probably as an agent of Blockbuster, sent to take out Dick Grayson once and for all. Or maybe just as a thief supplementing her normal income.

Physically, he’s probably the closest match for Kim’s acrobatics and raw physical skill, as well as posessing a sharp wit to match Shego’s own.

Black Canary might be a good match as well.

Shego is an elite agent suitable for use by anyone who pays well. She’s also likely to find herself in the soup because she mouthed off once too often, so I could see her starting out as an opponent, only to end up switching sides after her employer tries to punish her for insolence. 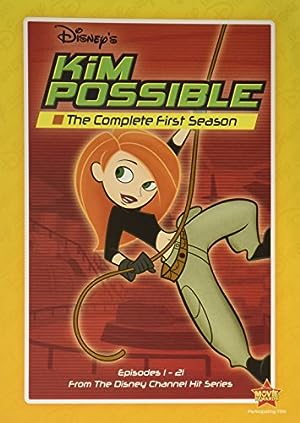 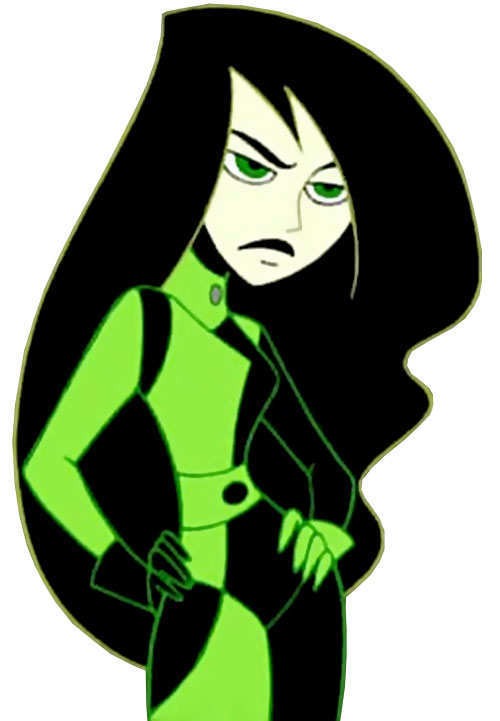