Shellshock is a minor, perennially obscure Marvel villain. He has been around since 1967 and never made much of an impression.

Shellshock is a vaguely competent thug and firearms specialist. He appears to be in good shape.

He also seems to have some skill in technology, since he enhanced (or at least rebuilt) the weapon provided by the Psycho-Man.

His gun, the “shock blaster”, fires explosive bullets or miniature hypervelocity shells of some sort. It also can quickly switch to sophisticated special-purpose projectiles as the situation requires.

Since the gun is not that much larger than some of its ammunition, it is likely that the projectiles are kept compressed in size using Microverse technology before they are fired. However, on one occasion the special ammunition was shown to be a barrel attachment.

Shellshock later rebuilt the shock blaster in an odd insectile configuration. This gun supposedly had twice the power of the old one.

Gary Buser was one of three goons recruited by the Psycho Man during his first foray on our Earth, along with Ivan the gunman and Live Wire (Rance Preston). The three enforcers were given special weapons. They were to assist and protect the Psycho-Man as he assembled a giant psycho-ray to conquer the Earth.

Shellshock and Live Wire already knew each other, having worked together as ’second-story men’ in New York City.

The plan of the Psycho-Man attracted the attention of no less than the Royal Inhuman Family, the Fantastic Four *and* the Black Panther (T’Challa). Although the powerful Psycho Man gave a good fight, his gunsels were flattened within but a few Phases. The managed to flee with their special weapons, though.

Years later, in 1980, Shellshock and Live Wire cased the apartment of famous sculptress Alicia Masters, the Thing’s girlfriend. They passed themselves for movers and absconded with valuable sculptures, but ran right into the Thing. The Thing crushed Buser’s shock blaster before he could pull the trigger.

Live Wire left to join the Circus of Crime, but Shellshock rebuild his gun. He also made himself a Silver-Age –Green-Lantern-villain-ish costume.

Learning that the Thing was being hospitalised, Shellshock attacked. But he soon discovered that dozens of villains reacted in the same way. Friends of the Thing came running to prevent the attacks, and Shellshock was defeated by Ant-Man (Scott Lang).

In 1986, Shellshock was one of the minor villains who attended the crisis meeting at the Bar With No Name to discuss the threat the assassin Scourge posed to their ilk. Scourge infiltrated the meeting and killed everyone there, including Shellshock.

Like the other Psycho Man flunkies he is greedy, overconfident in the power of his special weapon, and aggressive. He thinks of himself as a much bigger threat than he is – but that actually helps since it means he remains calm in combat.

His overconfidence seldom causes tactical blunders, just a lack of realisation about the power level of his opponents.

“My gun can also fire miniaturised hunter missiles — missiles which can never miss !”

“Freeze, fools — and face the power of Shellshock !”

“Back, brute ! I still wield the weapon here !”

“I hope the Thing recognizes me — before I beat his face into an orange omelet !”

Advantages:
Expertise (The technology of the Shock Blaster).

Due to lack of data, bits of the writeup are by necessity speculative. Such as the ammo capacity of the Shock Blasters, some of Shellshock’s Attributes, etc.. 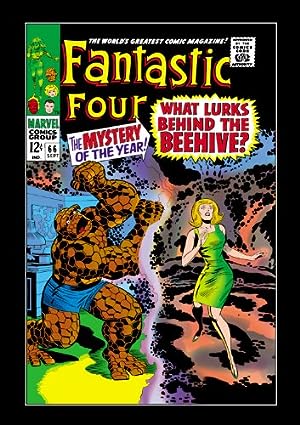 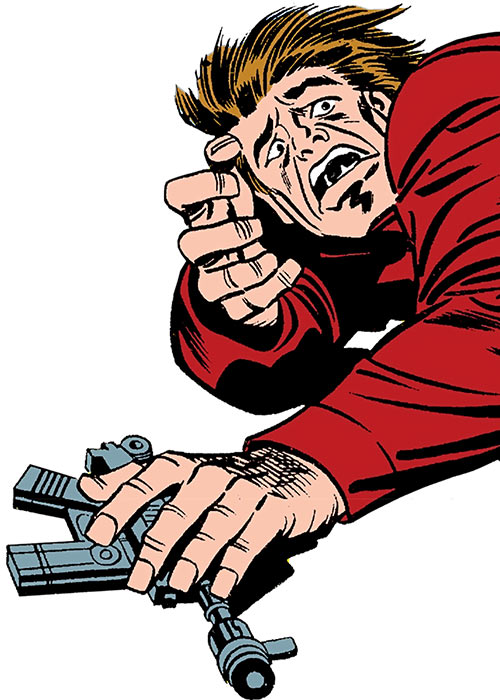 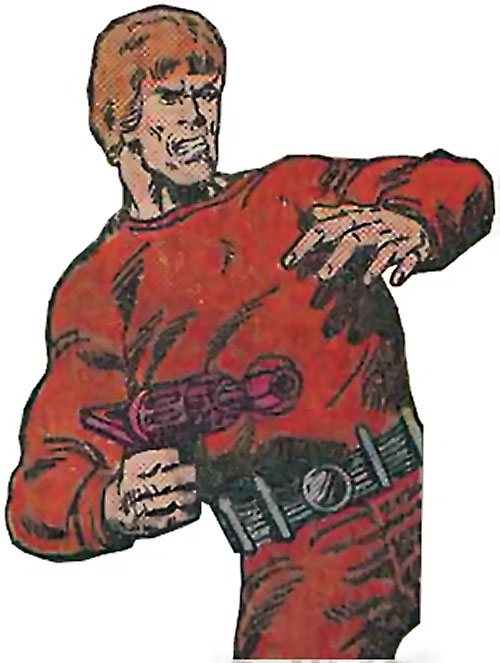