Strikeback! was a minor comics miniseries by Jonathan Peterson and Kevin Maguire. It started publication in 1994 with Malibu, but the comics market cratering interrupted publication. In 1996, it could be fully and correctly published by Image.

For the full plot and context, readers should start with the character profile for Nikita, the main character.

Sherman is stuck inside a tank which acts as a life support system for him, allowing him a certain degree of mobility.

The suit has a number of guns, and can detect life signs within a localized vicinity.

Formerly a valued employee of Mars Dragonryder. When an accident left him badly crippled, Mars created a large suit of armour, in the form of a tank, to allow him some mobility.

Less content with what had been done to him than Mars was, Sherman left, with help from Dragonryder’s daughter, Nikita. He joined Strikeback, a group of super-powered types in New York that Nikita was affiliated with, who had gathered together as a form of mutual defence pact.

When Nikita was kidnapped by mercenaries working for her father, Rascal contacted the rest of Strikeback. They hastened to support him in his hunt. They caught up to him at a local warehouse used as a staging ground by the mercenaries, where Rascal and Midnight Devil were battling a small army of thugs. 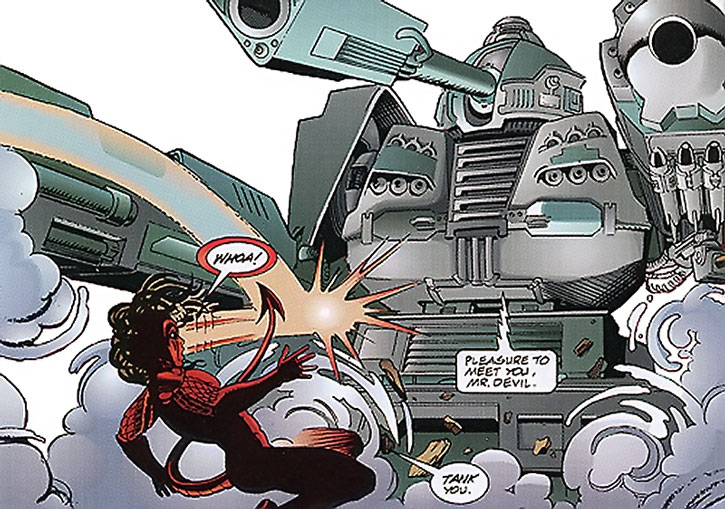 During the chaos of the fight, some of the mercenaries managed to flee with the captive Nikita.

Taking one of the remaining craft at the warehouse, Strikeback followed the trail to Dragonryder Island. When their attempt at stealth failed, they broke in, thanks in part to Sherman being familiar with the place as he’d worked for Dragonryder before his accident. Short Fuse used his powers to short circuit most of the power in the facility.

After clashing with more of Dragonryder’s mercenaries, they learned that the Dragonryder family had come from another dimension . They had been forced from their home by Monster X, a gigantic tyrannosaur. Monster X was itself prevented from reaching this dimension by technology on Dragonryder Island. 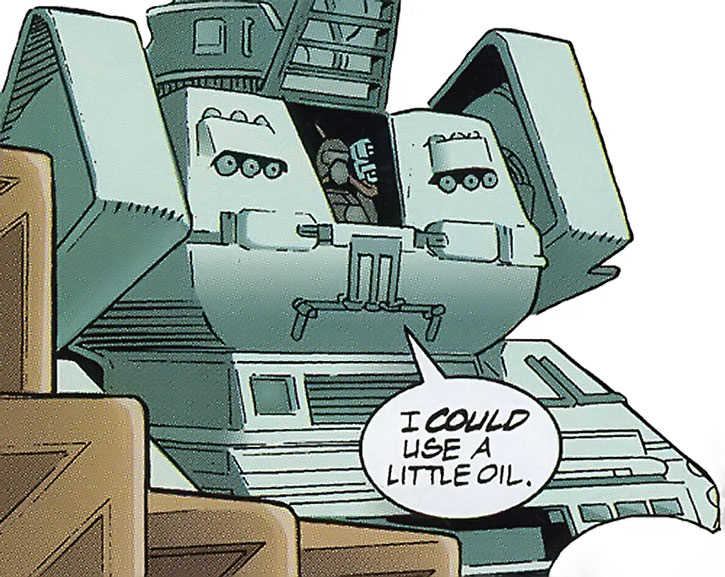 With Monster X on the rampage, and learning that Nikita was now there willingly, Strikeback reluctantly teamed up with Dragonryder’s forces to battle Monster X. When Monster X advanced on his teammates, Sherman met his attack to give them time to manoeuvre. But he knew that his slowness would make him an easy target for the creature.

Monster X stomped on him, killing him.

Having more-or-less come to terms with his bitterness over his situation, Sherman acts as the stoic backbone of the team. He aids his friends whenever he can, as they really serve as his only connection to human society. He feels a particular debt to Nikita, and will do everything in his power to help her.

“Sleep ? I almost remember what it’s like to sleep… to dream. To put my head on a nice, soft pillow. Funny how you don’t think about things until they’re taken away.”

“Sensor readings indicate a lifeform of incredible proportions materializing out of that spatial displacement ahead. I suggest we fall back our position immediately.”

Rascal used connection within STAR Labs to get Sherman help with his cybernetics, and they put him in contact with Cyborg. The pair have an informal self-help group between them.

Drawbacks:
CPR (Paraplegic outside his suit).

It’s unclear in what capacity he worked for Mars Dragonryder, whether as a scientist or a guard.

The statement of his former employment could indicate he was a guard. But his speech feels more like a scientist. And he was supposedly closely trusted by Mars, who would seem more likely to deal with his scientific staff. So I’ve written him up as a former scientist.

If this is incorrect, then possibly his mental stats should be slightly lowered, and his skill could be replaced with Military Science. 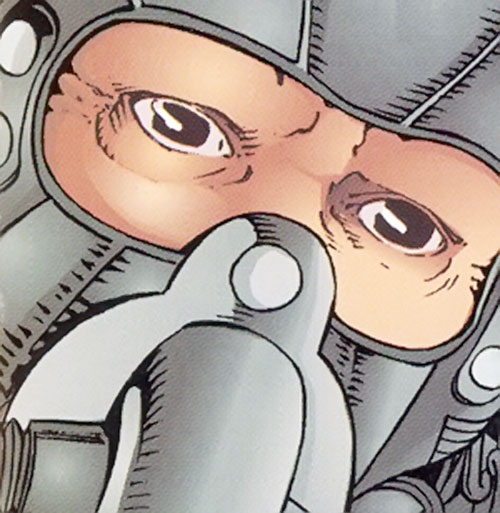