Archie Comics, beyond Archie, has their own roster of super-heroes. It started in 1940 with the original Shield, one of the earliest patriotically-themed super-heroes.

These heroes never quite managed to stick, but Archie periodically attempts to modernise and relaunch them. Can’t win if you don’t try, eh ?

Thus, Lancelot Strong was the second version of the Shield. He debuted in 1959.

Lancelot harnesses mental energy into various feats of physical prowess, such as :

Like many heroes of the period, the Shield’s diversity of powers also seemed to ebb and flow with the writer’s whim.

Testing his theories on his own son, Malcolm kept the boy in a germ-free environment within a huge bubble. He also fed him microelectrical stimuli through a specially designed helmet. When fellow scientists threatened to bring Malcolm up on charges of mistreating his child, the scientist drove off with his son.

(This is fairly common in 1950s stuff, perhaps riffing off pulps  nostalgia for Doc Savage. The 1950s Marvel Boy would be a very similar example. — Ed.)

But they were pursued by Communist agents who wanted Fleming’s secrets ; trying to elude them, Fleming drove off a cliff.

The child survived and was found by Fairfield County farmers Abel and Martha Strong. They raised him as their own. Y–ears later, when he returned to the overgrown wreckage of his father’s van, Lancelot found a notebook which explained powers he never realized he had.

(No need to explain the reference, I gather. — Ed.)

Lancelot also found a costume which his father intended him to wear when, according to the notebook, he would “protect all mankind from the forces that would cause it harm.”

Drafted into the army, Lancelot became a career soldier‘. Assigned to the tank division at Fort Patton, he was later transferred to Fort Sherman in the Midwest, where he worked his way up to Captain. Strong was a member of the Mighty Crusaders along with the original Shield (Joe Higgins) and Shield III.

Moreso than the other two Shields, Strong displays fervent patriotism.

“A young hillbilly recruit can do little against an evil supermind like Doctor Diablo ! I’ll make better progress as the Shield !”

He somehow reminds me of Baron Blitzkrieg. Perhaps it is all the funky powers that are developed from his “tapping into the latent parts of the brain.” Perhaps his biological father was an ex-Nazi. 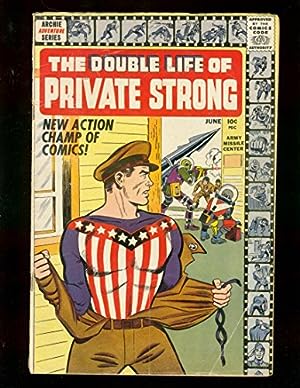 The Double Life of Private Strong 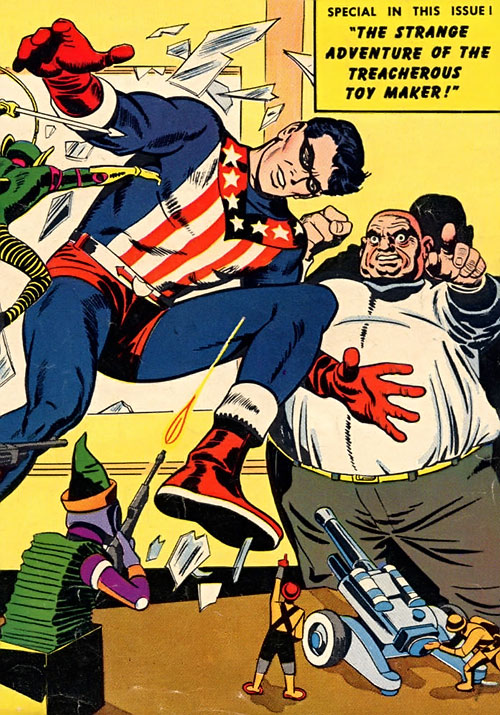