This article deals with fighting shields, from the low-tech to the future tech.

As always with Weapons Locker articles, we are interested in fiction. With an emphasis on comic books, action movies, RPGs and video games.

So it’s not an historical study of shields. Especially since there isn’t that much conclusive material about older designs.

This article is presented in two parts :

If you have a shield, it can be used in three distinct ways :

1/ To Block a given attack

The Block Combat Manoeuvre is on p149 of Blood of Heroes: Special Edition (BoH:SE).

Since the Block Manoeuvre bonus depends on the size of the object, we’ll list it in shield stats.

2/ To increase your combat OV

This is done using the Evasion Skill, possibly with the Must Wield Shield Limitation. It usually represents using a shield with dynamic, forceful techniques to control space and enemy weaponry.

A shield can be brandished to provide cover from attacks coming either from the front, *or* from the shield arm’s side. This Combat Manoeuvre will raise your Physical OV, based on the shield’s size.

This stacks with the Evasion Skill.

However, that limits tactical options. The Shield Cover Manoeuvre leaves you with but the following possibilities : 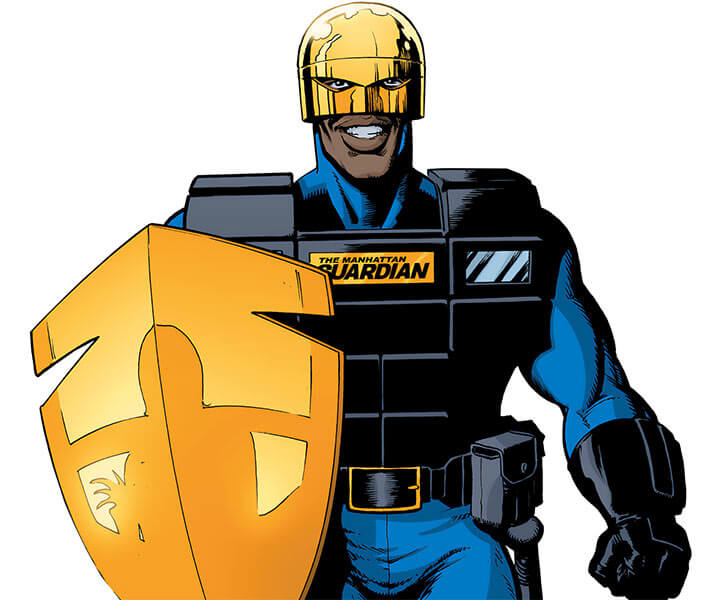 The Manhattan Guardian, with the shield of the Guardian (Jim Harper).

The opposition could refuse to play along and attack the shield instead. This is a Trick Shot, but easier :

Attacking shields can be critical for low-AV, high-EV fighters. Shields enhance OV by deflecting attacks, but attacking the shield itself allows for shifting the conflict to an EV vs. RV one. 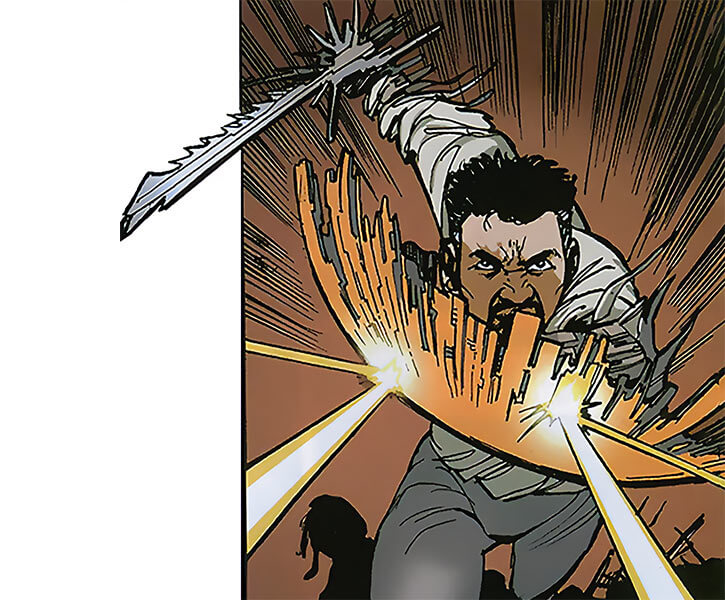 Shields can remain built simply as a BODY score.

However, most will also have APs of :

More scores may indicate that the shield is a Gadget or Artefact rather than simple equipment.

A shield will also offer bonuses to the Block and Shield Cover Manoeuvres. This is points-neutral in Gadgetry terms. All sizes of shields have intrinsic advantages and drawbacks.

In this article, the OV/RV bonuses — such as those from Blocking — are expressed as APs rather than as CSes.

This allows for use in games with 1 AP-wide modified tables.

Traditionally, shields in DCH are handled via the Block Manoeuvre.

Of course, standing there and and blocking one attack isn’t what shield-slinging heroes such as Captain America (Steve Rogers) or Battlestar (Lemar Hoskins) usually do in the comics. Or what sword-and-board fighters like Alistair do in video games and genre novels. They are far more dynamic.

With the Evasion Skill one can make skilled shield wielders harder to hit. But it cannot be sufficient. Whereas Blocking is too static, Evasion doesn’t requires any Actions. And, its typical use case is highly proficient fighters.

The Shield Cover Combat Manoeuvre is an intermediary step between the two. So we have a full spectrum that represents most fiction fighting scenes that involve a shield.

Another point was not to make shields too powerful. If it is too easy to interpose the BODY of the shield between you and the blows, you’re having /BODY/ for the price of BODY. And the shield likely has more BODY than comparable body armour.

(There likely is room for rules about splitting RAPs between shield and user. Howbeit that a/ is more complex than it seems in the case of BODY 02 wielders and b/ would thus require far more playtesting than we can ensure. That said, it would be the likely next step for even better shield rules, and perhaps power armourStrength-enhancing body armour, like Iron Man’s.) 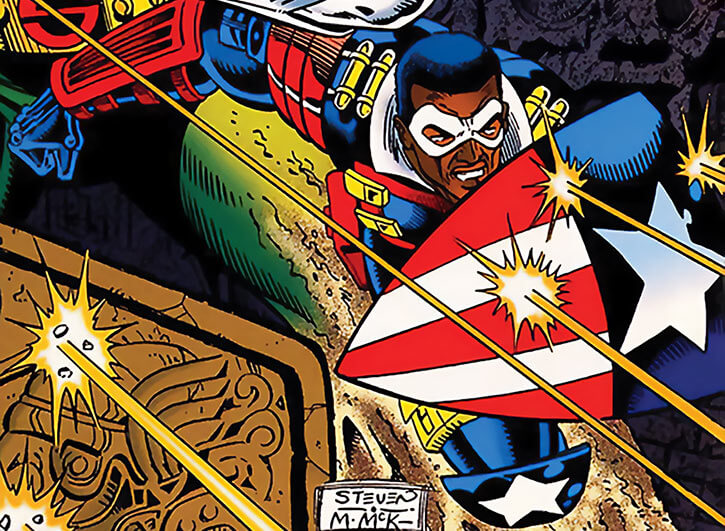 Use of these APs of Enhance :

The EV can also be used during a Charge Manoeuvre, instead of your current velocity.

If you aren’t using a buckler (see below), it is possible to hold a weapon in your shield hand. This *could* be sensible. For instance if the weapon is a spare or an alternate. Or if it’s your melee weapon kept there while you hold a throwing weapon.

It is possible to dual-wieldUsing two weapons at once, one in each hand weapons while also having a shield strapped on one arm. A good example is Scottish styles where the shield hand also holds a dirk. In steampunk  settings, one could also hold a black powder pistol in reserve in the shield hand. 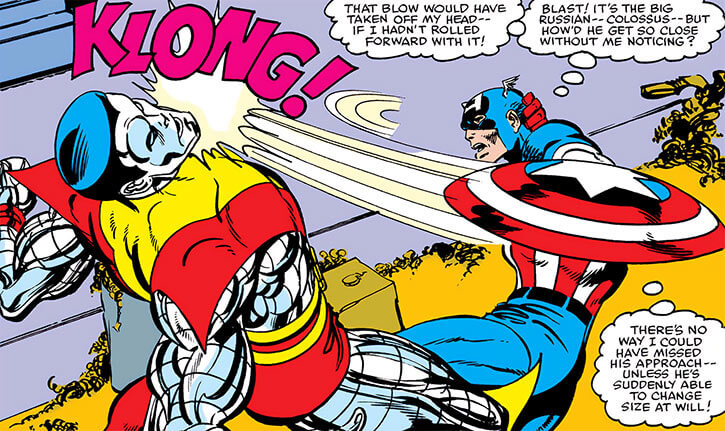 Captain America does a shield bash against a Colossus imposter.

Metal-reinforced hard wood is common. But it’s possible to make a pretty tough shield out of paper and glue, as some Comanche warriors did during the American genocides. The secret lies in the layering.

The popular image of a shield is planked wood. But planked shields are late designs, used by fighters in plate armour. The shield wasn’t as essential to their defense as with earlier, less armoured fighters.

More durable shields are built using plied wood, wrapped in leather or hide. As always, heterogeneous layers are stouter. And the covering really helps in holding damaged wood together.

Improvements include using treated linen covering instead of leather. It works just as well and is lighter. Another one is sealing the wood with oil so it doesn’t absorb humidity (especially at sea).

The range of BODY scores depends ‘pon the material. The BODY scores for the standard shields assume a knights-and-castles, or generic-heroic-fantasy, tech level. Bronze Age or earlier shields will likely have a lower BODY.

Conversely, a shield expertly made for a super-hero, using expensive modern high-yield steel, will likely have a BODY of 12 or so.

A “masterwork” low-tech shield might have a BODY higher by one AP than the stock model. More BODY than that will likely involve magical and/or exotic materials.

These certainly exist. The more common cases are : 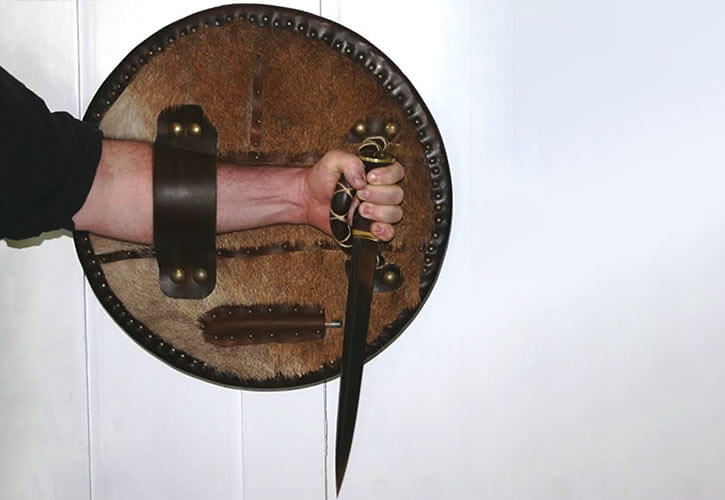 Scottish targe wielded along with a dirk. Source unknown, unfortunately.

These rules assume that shield use is important to the Character. Not many super-heroes have shields (especially if you decide that blatant Captain America expiesFictional character heavily based on another character shouldn’t count). And wielding one tends to be key to their fighting style.

On the other hand, these tactical options are overkill if the shield wielder is some random Non-Player CharacterRPG characters not played by a player, but by the gamemaster or the computer..

For such unimportant cases, simply treat the shield as giving a +1 AP OV bonus from the front and side, but preventing the use of Combat Manoeuvers.

Increasing the OV rather than the RV also means that if the attack connects, mooks-with-shields as are simple to take down as any mook. This avoids additional Current Condition book-keeping caused by scoring fewer RAPs.

They live in another castle – namely part #2 of our shields article.