Shingo was trained by Kyo Kusanagi one of the greatest fighters in his universe. Through a lot of hard work he has been able to learn some of the Kusanagi techniques.

He’s basically an obsessed fan boy who has very little potential, but trains like crazy to compensate for this.

Shingo was a mild-mannered student. He studied a lot and went to high school every day to become somebody important. However, he not only did he go to school just to study – he was also very excited to see his idol and “master,” the great Kyo Kusanagi!

Shingo had always been a fan of Kyo ever since his participation in the martial arts tournament that defined the Japan Team for the King of Fighters tournament. Thus, he could not believe his luck when it turned out to be that Kyo studied in his school as he did. The champ was still in high school despite being college-aged.

Studying at the feet of the master

Shingo always pestered Kyo to can teach him, but was repeatedly turned down. Yet he persisted.

One day, being hungry and the cafeteria line already full of students, Kyo just needed a lunch break! Then, he noticed Shingo. He exploited the admiration Shingo felt for him, and told Shingo that if he got some sandwiches for him, he would teach him.

Getting all excited, Shingo bolted into the cafeteria and fought with the other students. He finally managed to retrieve a bunch of sandwiches. After chowing them down, Shingo reminded Kyo of his promise. Having nowhere to hide, Kyo then decided to teach Shingo. The deal went like this: Kyo performed a special move once, and Shingo had to learn it from there.

However, even though Kyo did it only once, Shingo was always so careful about the details, and wrote down all the steps in his handbook. From there on, Shingo executes all the moves of Kyo, hoping one day that he would be able to wield crimson flames as Kyo did! Of course, it was not actually possible since Kyo can wield them due to his Kusanagi blood.

Shingo trained without rest night and day. His big chance finally came when he passes the preliminary battles for the King of Fighters tournament in 1997. He made it as a single entrant. Shingo always took his care to learn the moves of the other fighters, for his later battles.

Shingo was like a friend for everyone, even for those who do not seem to care too much about others. However, his trial came when the Orochi power made its appearance in the tournament. Now, Yabuki had to fight for real. Since Shingo had no notes on this new opponent, he had to do whatever he could do to fight the evil entity.

Finally, the Orochi showed itself. But before Kyo went to his final battle, Kyo gave Shingo his gloves. He then bid Shingo farewell. Shingo wanted to help him, but Kyo told him to stand back, as his opponent was stronger than anybody he had known. Shingo then saw Kyo vanished into the mist. Yet, the younger student remained to keep on fighting!

It had been two years since Shingo last saw Kyo. Only his gloves remained as his only legacy Kyo left to him, and Shingo greatly missed him. Yet he kept trying to perfect the Kusanagi martial arts style.

One day, Shingo was approached by Kyo’s best friend, Benimaru. This is how Yabuki was invited to participate in the next King of Fighters tournament! This was the perfect way to show Kyo, wherever he would be, how much he had improved! He would certainly feel proud!

Shingo then met his new partners, K’ and Maxima. It seemed weird to him, having participated as a single entrant last tournament. Although the two fighters were quite cold and insensitive, Shingo greeted them warmly.

And soon, Shingo began to fight with all his might in the tournament. He also got really down when he saw K’ wield flames. “Geez, why can’t I do that?” moaned Shingo.

His question would soon be answered by Krizalid, host of the tournament. He had Shingo and his teammates taken to his underground facility for the final battle. It seemed that Krizalid had kidnapped Kyo to create clones and infuse both him and K’ with Kusanagi power in order to conquer the world!

Despite being severely overpowered by Krizalid, Shingo never fell back. Nevertheless, he was about to be eliminated by Krizalid. But all of a sudden, a huge crimson blast filled the room and blew Krizalid away. It was Kyo! He had saved him! Shingo’s eyes filled with tears. He had so much to say to Kyo!

However, a steel door slammed in front of him, and the whole base began to fall apart! Shingo had no choice but to run. But as he looked back, he promised Kyo that one day, he would see him turn into a true man!

Shingo trained for a whole year to show Kyo how much he had improved. Now, he was more than ready to face the new challenges that could be seen in the next King of Fighters tournament! The only problem resided in that neither him nor Benimaru had any idea of how they were going to complete their team for this year’s tournament.

K’ and Maxima had been missing ever since the Krizalid battle, and there were no other qualified warriors to replace them. 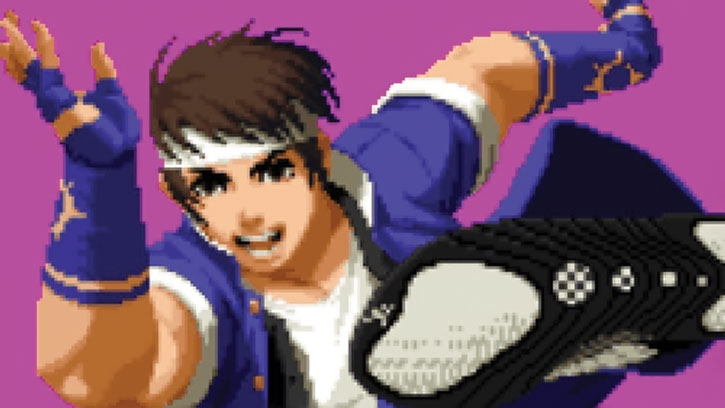 One day, Benimaru told the anxious Shingo that there might be a chance yet to enter the next KOF tournament. Shingo trembled with excitement, and Benimaru quickly told him that an old friend of his would help them out to form the new team.

At the meeting place, Shingo found himself face-to-face with a huge black man in a suit. He looked rather impressive, and he looked quite serious, unless around Benimaru, where the lumbering oaf was kind and gentle. Along with the man was an ominous ninja who seemed very unfriendly. Since Benimaru was talking with his longtime friend, Shingo saw it fit to strike up a conversation with his new partner.

Shingo kindly introduced himself, but the ninja seemed unimpressed. Shingo insisted on making the creepy guy talk, up to the point where the ninja finally grew tired, and in a swift motion, tried to strike Shingo down. Benimaru saved Shingo in the nick of time, knocking the eerie warrior away. Shingo seemed out of place in a team of bitter people, but his high spirits of a youngster couldn’t be quenched!

Suprisingly, Shingo performed superbly in the tournament. He complemented the great work of his partners. With his help, the new team made their way into the finals. Shingo was burning with excitement to finally prove that he had become a real man!

Shingo and the others travelled to Southtown for the final battle. But things began to go wrong the moment they set foot in the industrial zone. NESTS agents surrounded the abandoned factory where the last match was to take place. Forced into a dark room at the back, Shingo realized that he had fallen for a trap by Zero, one of NESTs’ officers!

Dumbfounded by Zero’s plans to use their fighting energy in order to charge up the Zero Cannon, Shingo fought with all his might in order to stop this evil plan. Shingo, despite being no match for Zero, put it all he had into the fight, emulating the burning spirit of his master Kyo. The others were surprised by Shingo’s fierce determination.

Being one of the main pillars in Zero’s defeat, Shingo and the others escaped from the unavoidable destruction of Southtown at the hands of the Zero Cannon.

On his way out, Shingo barely got a chance to exchange words with Kyo, who had been watching over them. Kyo patted Shingo’s shoulder, complimenting him for his strength. Shingo was so excited, but Kyo hurried him on his way. Shingo turned back, and wished Kyo good luck, for a new life began for Shingo, a life dedicated to the fight!

They say if you fight hard enough for your dreams, they just might come true, and Shingo’s golden dream finally came true one year later. Benimaru told him that Kyo would be joining them for the next King of Fighters tournament!

Shingo was overwhelmed with joy. He just couldn’t believe that he would be fighting along his side master in a King of Fighters tournament after so many years. The whole team met at a local park, including the former partner of Kyo and Benimaru, judo tough guy Goro Daimon.

Kyo warned that spies might be behind them – likely NESTS spies. Shingo wondered what his master would do about it, and Kyo answered that the solution was simple: enter the King of Fighters tournament and destroy them!

The tournament was like a walk in the clouds for Shingo. He was ecstatic to witness the power of his master Kyo. He felt totally inspired, and put his best effort into helping them out. Shingo never gave up, even during the final battle against the NESTS cartel. This took place in their main HQ, a space station floating around the planet!

Shingo was severely outgunned, but he mustered enough courage and dedication to surpass his lack of technique and skill. Eventually the CEO of NESTS, Igniz, was defeated. The space station crumbled into the sea, along with his ambition.

Shingo and the others managed to escape to shore. The Yabuki lad was speechless over the experience, and having been part of such a historic battle.

Shingo turned around to share his happiness with his friends. But everybody, including Kyo, gave him the cold shoulder Shingo was abandoned, as his partners walked away from the scene.

The dream had come to a sudden and harsh end. Shingo was left alone with a feeling of wasted emotion…until a familiar man approaches him and offered Shingo the chance to become stronger than ever before. Shingo looked into the man’s eyes, and realizes that it was Saisyu Kusanagi, Kyo’s father and mentor!

Shingo happily accepted, and both departed on a journey to discover themselves, and for Shingo to find a new purpose.

In KOF ’98, Shingo replaces his wristbands with Kyo’s gloves, but painted blue to match his uniform.

Shingo is a bright, funny, and good natured young man. He is always so jolly, and never seems to get angry. He considers all the fighters to be his friends. Everybody sees in him as a weird kid, but a good kid nonetheless.

Shingo idolises Kyo, and dedicates all his victories to him. Still, his general lack of experience hampers him. He always brings his notebook in case he forgets a move.

An all-around good guy, Shingo always fights with his best moves, but he is also afraid his mother may come and put him to study again!

Shingo could be inserted and used as is anytime you need some comedy relief. To really fit him into the DCU he could be an obsessed fan boy of one of the martial arts super heroes.

Drawbacks:
SIA (Kyo Kusanagi and being just like him), Oblivious, Unluck.

Shingo did not manifest Flame Projection until his very last appearance and even then it was extremely rare. Note that no storyline explanation was ever given how he could wield the red flames of the Kusanagi, which are supposed to be only usable by the Kusanagi bloodline. Although Shingo has believed that he could wield the red flames for some time now. 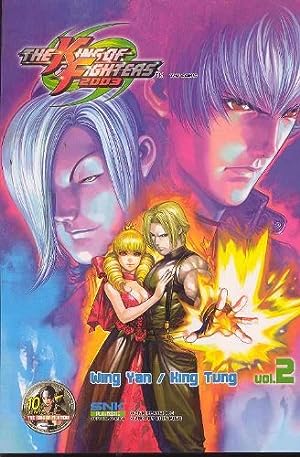 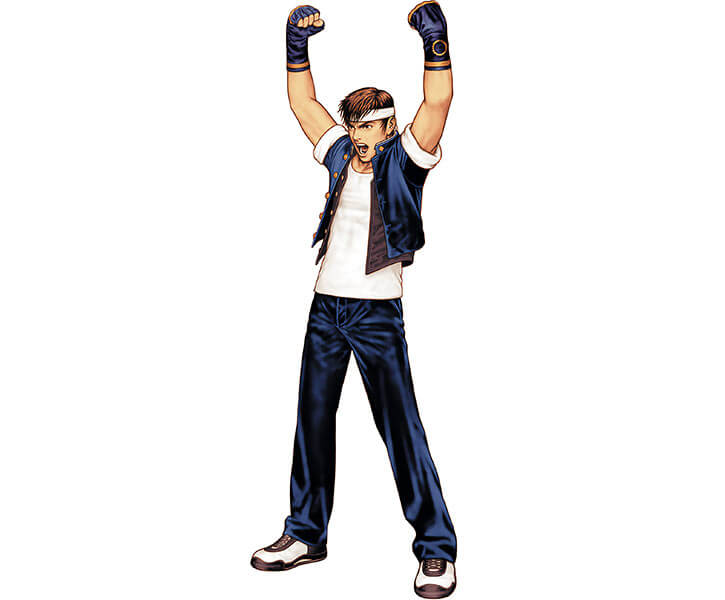 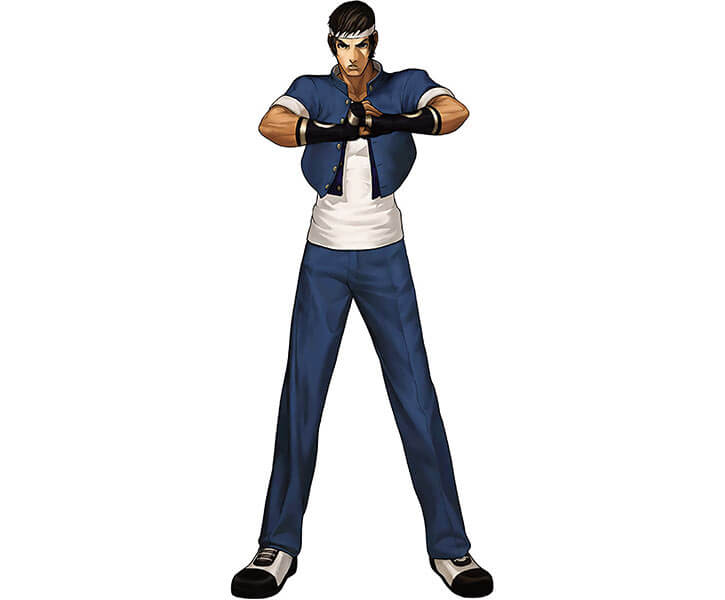 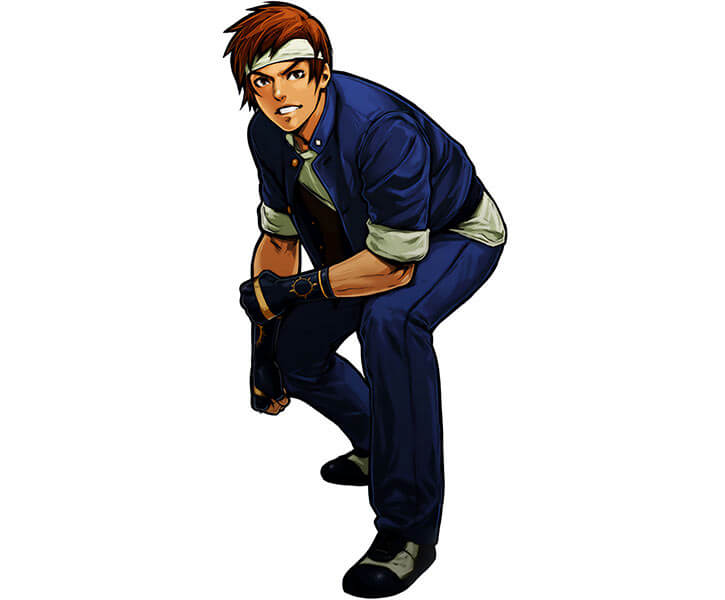 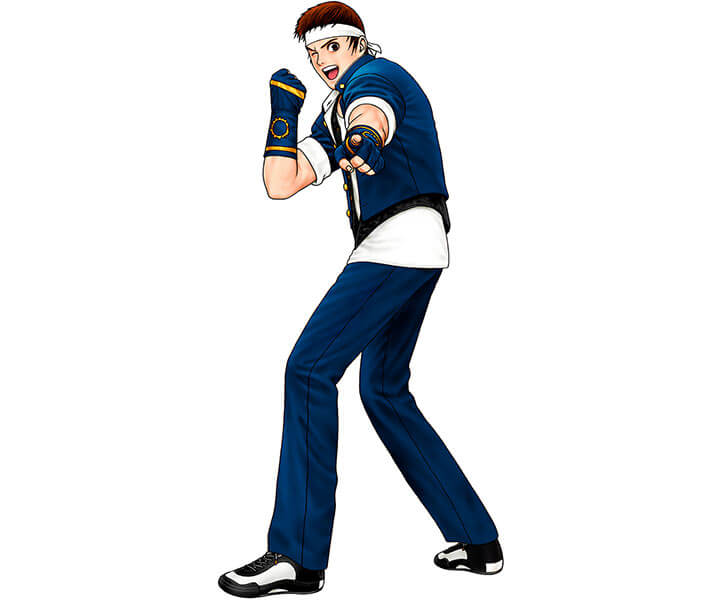