The Shingouz people come from a single planet, name unrevealed. Their homeworld is technically habitable, but it’s difficult to be polite about it. The resources are nearly inexistent, the climate is atrocious, the atmosphere is difficult to breathe even for the natives…

There are but two vague resources :

The Shingouz species are small sapient  humanoids. They seem to be a failed evolutionary mishmash of several species with essentially useless wings, and trunk/snout used both to breathe and eat/drink. They have three different stomachs, each specialised in a type of alcohol.

Shingouz can only fly if they have both near-null gravity and a sufficiently dense atmosphere. Which is unlikely to occur. But such conditions can sometimes be found, for instance in the gravity chute “elevators” between Point Central habitats.

The Shingouz always operate as a triad – either three males or three females. These triads seem to last for life. Marriages in Shingouz society are between a male triad and a female triad. Reproduction is ritualised and occurs simultaneously, with each female always having three babies (for a total of nine births).

Shingouz maturity occurs within three years. Therefore, one assume that birth control must be rigorous not to overshoots the meagre resources available on the homeworld.

Presumably due to this scarcity, Shingouz society is remarkably honest and strong on solidarity. The Shingouz are always ready to help each other, and they put everything they have in common so resources use is as efficient as possible.

Since their homeworld is only livable through remittances, the Shingouz have set up a services industry. Triads of males are sent offworld to make money. They all return to the homeworld at once with the money, which is when the Apominobas peddlers come set up their markets on the Shingouz homeworld. Then the Shingouz buy what they need to endure for another cycle.

The Shingouz specialise in a single industry, to maximise their brand and competence. For unrevealed reasons, this industry is espionage.

The Shingouz has a robust reputation among intelligence experts, politicians, corporate leaders, etc.. They are reliable, efficient, likely can get the goods even when no one else can, and they never lie.

However, many people who do not need the Shingouz’s services despise their sneaky and mercenary way. Thus, it is frequent for even the Shingouz’s client to make a show of mistrust and contempt toward them in public.

Laureline and Valérian have a working relationship with a specific, highly accomplished triad of male spies. The two frequently collaborate throughout the series. Shingouz intelligence has repeatedly proved invaluable to the couple.

Among this triad, one has a huge crush on Laureline. On several occasions, this has resulted in the accidental confessing of free information to the Terrans. This is near-sacrilegious by Shingouz standards, since money is necessary for survival. But the others will always forgive their triad brother.

Another of the triad seems to have a marked weakness for gling, even by Shingouz standards. Or perhaps it is the other two who are unusually sober.

As their business relationship develops, the Shingouz can be counted as allies of Valérian and Laureline. Their intelligence is still to be paid for, but the two Humans get preferential rates and priority. And the Shingouz will go out of their way to warn Laureline when they have data she really really should buy.

This trio of Shingouz aliens are remarkably adept intelligence experts. They wheel, deal, negotiate, pay off, pressure, blackmail, arrange, etc. to get access to an endless stream of seemingly unobtainable information.

Though the Shingouz are physically pushovers, they stay calm in dangerous situations. They have been through a lot of tense moments, and are confident in their ability to arrange an out. After all, they almost certainly will be able to provide useful services and information to whoever is threatening them.

They are also experts at corruption and manipulation, which greatly helps with their continued survival. Watching the Shingouz use social engineering to get out of trouble or penetrate security is impressive.

It is entirely possible that the Shingouz are elite hackers. Nothing of the sort is ever shown, but Valerian isn’t a techy series and wouldn’t dwell on that.

All Shingouz spies carry a grubby satchel of some sort. It and its content seem to be their only belongings. The bag typically carries :

The Shingouz are always, always working – acquiring and reselling intelligence.

Their life isn’t easy, and they tend to kvetch  about it. But they do realise that things would be much worse on their home planet, and make do. Furthermore, they have family and neighbours to feed, and thus need to make as much money as possible.

Like all Shingouz they are reliably honest. They always honour their deals with the highest-paying client, their information is always reliable and their prices are always fair. At one point, a Shingouz takes money from an unconscious client but makes sure he only paws the agreed-upon percentage so as not to take unfair advantage.

The Shingouz always work a problem through multiple ends to maximise profits. For instance, if they are hired as fixers to set an operation up, it is likely that *everybody* involved will owe them a percentage of their gains for acting as intermediaries. Every shred of opportunity will be cunningly exploited for profit, several times if possible.

Being a triad, the Shingouz sometimes do the thing where one starts a sentence, the other continues it and the third ends it.

Being seen with contempt by many people, the Shingouz take pride in their professionalism and competence to compensate.

An example of the Shingouz working

The Shingouz are looking to infiltrate a secure location with multiple layers of patrolling guards around the core.

Drawbacks:
Creepy Appearance (Theirs is an unpopular species), MIA toward honest dealings. MIA toward Gling (except for the one who has a SIA), and one has a CIA toward Laureline. Possibly more than Catastrophic, in fact.

The Shingouz likely, but not demonstrably, have Scientist (Computers): 07 or more. 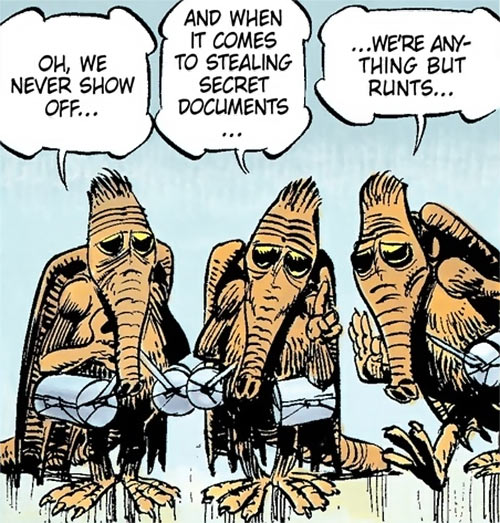