Meanwhile the Undying Don resurrected Vanguard. Years — if not decades — before, he had come into possession of the Everfull Cauldron. The Cauldron had drifted in the timestream after Justin pushed it in the waters of Castle Revolving. Thus, it had returned to Earth in an era well before 2005.

Beyond his fascination for the supernatural and his general liking for horses, the Don was at that point looking for whatever small shreds of redemption he could achieve. He was struggling with his actions to achieve his bloodstained reign over the underworld.

The Harrowing of la-la-land, part 1

Ystina decided that the LAPD were fellow knights, as the LAPD badge  depicts a shining golden building that looks a bit like a castle. She went to a police station to rally them and gather champions. However she had lost her ability speak English.

That was the result of Sheeda sabotage. Though the Mood 7 Mind Destroyer could no longer affect her, it could apparently still track her. This allowed for Sheeda forces to position themselves to kill the Knight.

Queen Gloriana Tenebræ herself, magically disguised as an aged archaeologist, stepped in as a police-accredited expert. This expert had been called in to provide linguistic and cultural translation to help the LAPD communicate with Justin. The “archaeologist” was paired up with FBI agent Helen Helligan.

However, after the interrogation reached an end, Gloriana taunted Ystina with clues about the fate of Galahad. She then reverted to her form as the Queen of Terror. A Sheeda strike team descended on the police station, killing most of the cops. Justin was captured and dragged back to Castle Revolving.

The Harrowing of la-la-land, part 2

There, Gloriana had the Shining Knight confront the thoroughly broken and brainwashed, but physically more powerful, Galahad the Accursed. The fallen paladin  had served the Queen of Terror for ten thousand years. The degenerate, possibly undead brute toyed with Ystina, who was in shock over seeing him in this state. He easily overcame her.

He was about to kill her when the Queen of Terror, with her inhuman senses, smelled the blood from Ystina’s menstrual period. She ordered Galahad not to kill Justin but to rape her, break her and make her into a slave instead.

Holding Ystina in a Byrne hold, the gibbering fallen knight was about to comply. But the Shining Knight, unexpectedly grabbing his two swords, forced herself to kill him.

The Harrowing of la-la-land, part 3

Meanwhile, the fully recovered Vanguard served briefly as a steed for the Undying Don. They rode out to confront the same Sheeda forces that had invaded the police station. These were now looking to recover the Undry Cauldron. Vanguard was the only survivor among those fighting for the Don, and the Sheeda repossessed the Cauldron.

They took it to the Miracle Mesa. Reality there was soft enough for them to easily bring Castle Revolving in and load the Cauldron.

However, during that seeming triumph, two of the Seven Soldiers were closing in.

The fall of the Queen of Terror, part 1

At Don Vincenzo’s villa, Vanguard allied with Zatanna and her new apprentice Misty Kilgore. This allowed them to escape from Sheeda agent Neh-Buh-Loh. The two magicians then rushed to New York City, where a Sheeda invasion was now taking place.

The winged horse then flew to the ruins of Glorias. He brought back a herd of fellow super-horses to fight against the Harrowing along with the Manhattanites.

The fearsome Frankenstein destroyed most of the Sheeda forces at Summer’s End. This cut off the forces who had already been unleashed on the XXIst century. He then confronted the Queen and commandeered Castle Revolving.

Frankenstein forced the flying castle back above New York City during the initial stages of the XXIst century Harrowing. In the confusion, Ystina emerged from the Cauldron and engaged Gloriana in a duel.

The fall of the Queen of Terror, part 2

Though she did her best and badly wounded the Queen, the Shining Knight was eventually overwhelmed. The lass was thrown from Castle Revolving to her death. However Vanguard, who was leading his fellow winged chargers in New York, sensed her. He flew up to her and caught her in time.

Seconds later it was the Queen herself, still standing at the very edge of Castle Revolving from which she had pushed Justin, who fell off. The undead archer I, Spyder unbalanced her by shooting her into the mouth. Though the Queen survived even that, she was then mortally hit by the Bulleteer’s uncontrolled car. The reluctant heroine was the embodiment of Aurakles’s Spear.

Camelot, and countless other civilizations, was avenged when the metaphorical spear of the world’s first super-hero struck down the Queen of the Sheeda.

Ystina (still with her faithful Vanguard) became a high school student at the H.S. Johnson School for Heroes. She was still haunted by the fate of Galahad, and longed to accomplish her knightly duties instead of studying. But her friend, adviser and Merlin, the ghost of Ali Ka-Zoom tempered her ardour by telling her she would later have great adventures.

He also recovered Caliburn, which had been lost in the fall above New York City. Ali gave it back to the Shining Knight.

Ali further revealed that there existed an antediluvian monument telling of a golden age. This monument had been erected for the glory of the Queen who had ended the age of death – Queen Ystina the Good. He did not specify which Flood he was referring to. But the Shining Knight likely will play an important role in the (possibly distant) past or future of the DC Universe.

Ystina is presumably still a high school student. There have been sightings of the Shining Knight in times of need, fighting along with the world’s heroes. That was the case during the Infinite Crisis, and later during Black Adam’s worldwide rampage (the so-called World War III ). Ystina was part of a large task force of heroes that engaged and defeated the powerful madman in China.

She also was present among the heroes trying to destroy the Superboy from Earth Prime as he came back from his forced exile.

In 2009, the Teen Titans approached Ystina as part of a recruitment wave. They thoughtlessly sent Red Devil as their recruiter. Reacting with hostility to the young man’s stereotypical demonic appearance, the Shining Knight lost sight of Red Devil as he sprinted away for dear life.

A lean and muscular teenager, whose eyes seem completely black under certain angles.

She has tiny breasts, and usually kept them compressed with bands of cloth around her chest to pass for a boy.

After she became a high school student, she started wearing skirts, polo shirts and a bra.

Ystina is a thoroughly pure knight. She’s virtuous and dedicated to the highest ideals of mythical chivalry. Her paladinhood consumes and transcends her entire personality.

She can almost be entirely described as, well, a knight in shining armour. She exhibits such un-XXIst-century-like behaviour as assuming that cops are fellow knights, and taking care of random vagrants.

Since we chiefly witnessed her in times of total war and on a mission of vengeance and justice, her peacetime behaviour is unrevealed. But it presumably matches Arthurian chivalric ideals with a Celtic twist.

At 16, Ystina is considered to be a fully grown adult in her own culture, and behaves largely as such. Going to school and being treated as a teenager is an odd and somewhat frustrating experience for her. Yet her exalted idealism does have teenager-like qualities.

Coming from a different time and culture and having passed herself for a male for much of her life, her behaviour is short on modern stereotypically feminine qualities.

The one bit of personal life she indulged herself was her secret crush on Galahad. Seeing him debased and corrupt, and having to kill him, devastated her. Even weeks after the deed, she still felt bereaved, vulnerable and terribly guilty about it. This scar might take years to heal. Some PTSD  was evident, though Ali was helping her work through it.

“Sir, I would not dare be so bold but the hour is dark, and final. Make me a knight.[…] Let me fight in Arthur’s name.”

Vanguard: “Keep your eyes on the dead, Justin !”
Justin: “I… I don’t think I have that many eyes, Vanguard.”

(Suddenly taking the Sword from Gloriana Tenebræ) “[Drawing the blade] is easily done. There is not one soldier in all of Avalon whose heart is less than pure !”

(Trying to communicate before being taught English): “Y llamin arach arwyr ! Arwyr y Roi ! Arach Avallach, Ystin !” (Rough translation : “ I am looking to join the champions ! The champions of the King ! I am Justin, at the service of Avalon !”)

“Arach ex Lloriana Sheeda ? Y da llamfada du arach ! Llamfada !” (Rough translation: “Are you serving Gloriana of the Sheeda ? I am a follower of Lancelot of the Long Arm ! The Long-Armed One !”)

(Kneeling with her sword held in front of her) “No. Not while one knight of Camelot endures.”

(Approaching the ghost of Ali Ka-Zoom) “Forgive me, old man. Mine own trials did blind me to your distress. Are you sick ?”

(In a LAPD precinct house) “Tell the blue knights I saw their crests and shields, and knew they were guardians of some human law. Tell them I came to this, their castle, to gather champions against the unstoppable plague that is coming.”

“This world is under my protection. Camelot lives !” (picks up a pistol and empties the magazine into Glorianna’s chest)

(After being forced to kill Galahad, seething with cold rage) “Red am I in battle. Red the ravens that follow at my heels. Gloriana. I am your death.”

Ystina (As she and Vanguard plunge into the timestream): “Vanguard ? Are you mad ?”
Vanguard: “Justin. I’m a horse. Who ever heard of a mad horse ?”

“Did you think I would ever let you fall, young knight ?”

Bonuses and Limitations:
Systemic antidote only vs. disease (-2).

Drawbacks:
Age (Young, at least in the XXIst century), Exile (the Camelot of her time). Formerly had a Dark Secret (her gender).

Bonuses and Limitations:
Claws can inflict bashing Damage if desired (+1).

Advantages:
Slowed Aging (if not Immortal), Misc.: Those horses seem to require very little air — they lived on the highest peaks of Himalaya for millennia, and Vanguard could dive and swim underwater (!) for at least as long as a human.

Drawbacks:
Misc.: Vanguard did not initially speak or understand English (yeah, I know most horses don’t. Shaddup.) Yet he seemed to be able to do both during the battle in Manhattan, presumably as a result of Ali Ka-Zoom’s ghostly magic.

Due to the lack of material, the stats involve quite a bit of guesswork.

Caliburn Ex Calibur ● 8 points (Easily Removable) ● Descriptor: Magical sword
– Strength-Based slashing Damage 7, Increased Critical 2.
– Feature 1 (Excalibur is even more indestructible than most indestructible things).
– Senses 1 (Magic Awareness).
– Feature 1 (Caliburn can only be drawn by the pure of heart, and seems able to several hurt the wicked who sheathe or try to unsheate it).

True lantern
During her first invasion of Castle Revolving, Justin had something called a true lantern. It shed a light that stunned and repulsed evil creatures and the dead (up to and including an undead King Arthur, and Gloriana Tenebræ). But she lost it when Vanguard plunged into the timestream. Speculative stats would be some kind of no range, Area (Burst) Affliction. 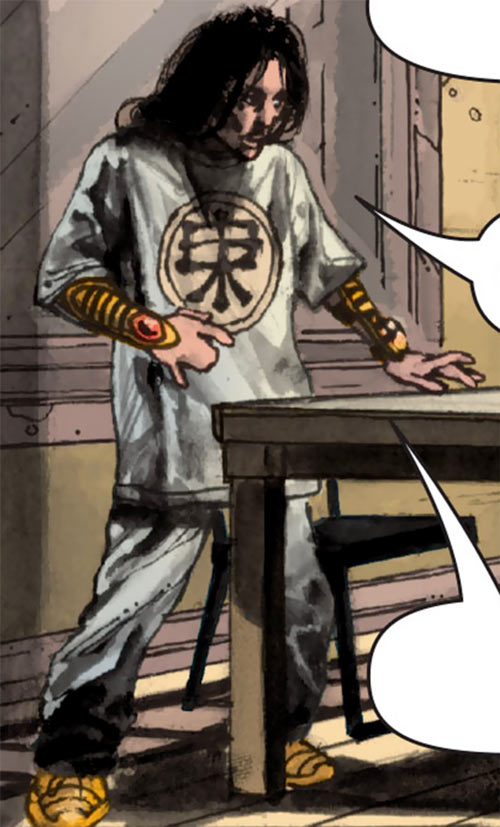 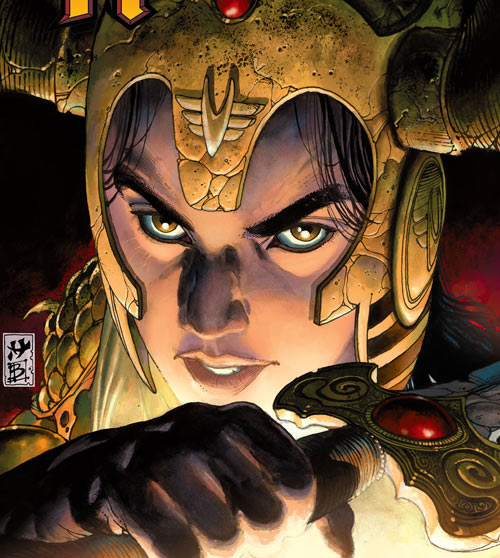 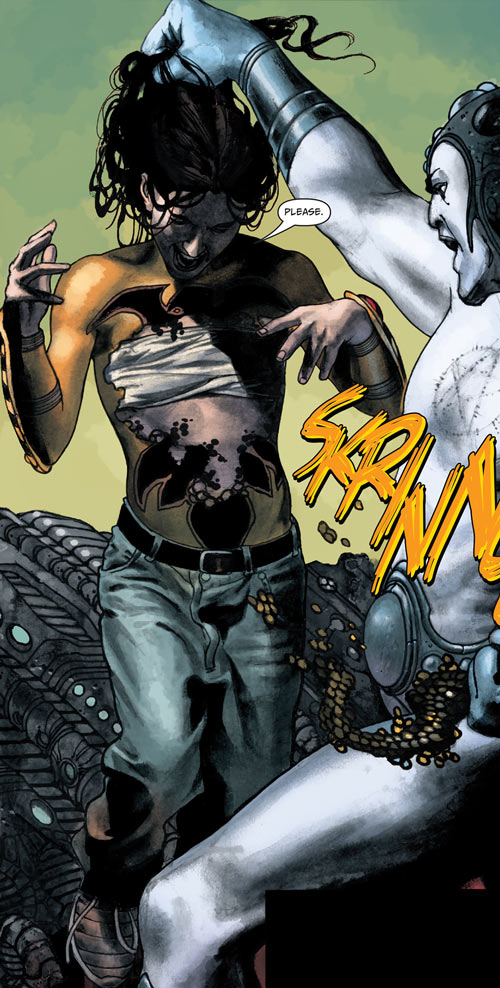 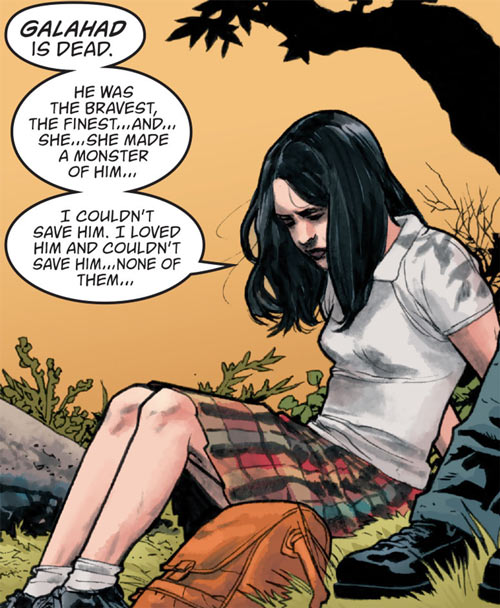