Shinomori Aoshi is one of the most dangerous fighters alive. As a master of both swordsmanship and unarmed combat, he has been known to fight with a single ko-dachi (“small sword”, also called a wakizashi) for defense, and his unarmed martial arts as offense. At other times, he has fought with a pair of ko-dachi.

He is also an accomplished ninja, with the stealth and tracking abilities that implies. His reflexes are incredibly fast. Only Kenshin and Soujiro, and most likely Shishi-O, are faster.

Aoshi is also a master of the Oniwa Banshu Succession Technique, which is also called “Water Movement”. By using his chi  and a special pattern of movement, he can appear to be in several places at once around his foe, or appear to be where he is not. When using the Water Movement, he has come very close to beating Kenshin.

Aoshi is one of the most tragic of all the characters of Ruruni Kenshin. As the leader of a ninja group called the Oniwa Banshu, he and his clan were not present at the final battle that marked the end of the Shogunate, and the start of the Meiji Restoration Era .

Thus, in order to prove that the Oniwa Banshu were the strongest fighters, he began working for a depraved opium lord. Aoshi knew that he would eventually cross paths with the legendary Hitokiri Batthowsai, reputedly the strongest.

Takani Megumi, the doctor that the drug lord had been forcing to make opium for him, then ran away. Aoshi’s men were sent to reclaim her. But the doctor had already made contact with Kenshin and his friends, who came to get her back. One by one, Kenshin defeated the Oniwa Banshu, until he came to Aoshi, himself.

During the time Kenshin had been confronting his men, Aoshi had gone to where Megumi was held. He tossed her a knife. He also told her that the drug lord would likely torture her until she made the opium again, as he knew she would rather die than do that. But the drug lord saw this, and grew angry. 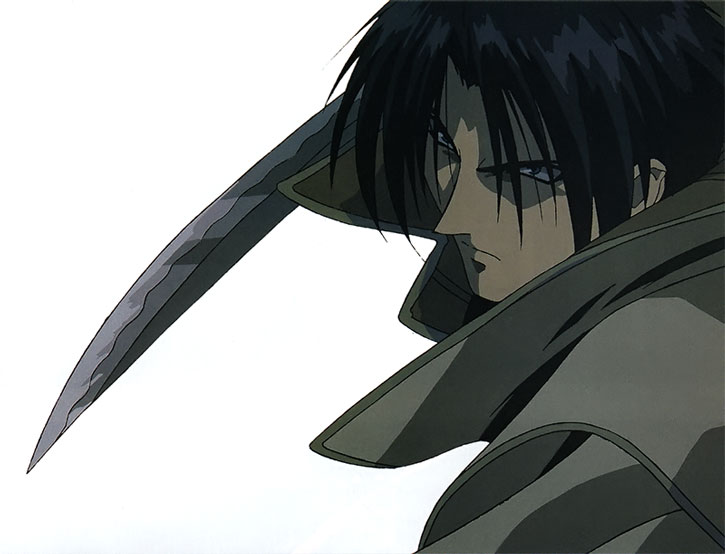 When Kenshin and Aoshi confronted each other, the duel was incredibly close. It would have eventually produced a winner, except for the fact that the drug lord showed up with a gatling gun.

The rest of the Oniwa Banshu (four extremely powerful fighters) had recovered from their bouts with Kenshin and Sanosuke by this time. They gave their lives to both protect Aoshi, and buy Kenshin time to disable the gun by cutting off the turning handle. Aoshi could only stare in shock, as his men, almost family to him, were cut down like dogs.

During the Shishi-O saga, Aoshi sold his services to the insane swordsman for the right to face Kenshin. If he could beat Kenshin, he reasoned, then his men’s lives weren’t in vain.

Eventually, they fought. Before Kenshin defeated him, he told him how Makimachi Misao, a girl who was part of the Oniwa Banshu who was in love with him. She had made Kenshin swear to bring Aoshi back. A little later, when Kenshin faced Shishi-O, himself, Aoshi came to a decision. He fought alongside the Rurounin.

If you wish to know more, watch the anime.

He is very tall, and imposing. He usually wears a black ninja suit under a tan trenchcoat, and carries what looks like an unusually long katana on his back. In battle, he draws a wakazashi (ko-dachi, or small sword) from the top, and a smooth-handled version from the bottom with his other hand.

His black hair is short, with his bangs hanging just over his ice-blue eyes.

Aoshi is a grim figure, and very quiet. He rarely speaks, and doesn’t waste words when he does. He will sometimes chant the names of his four lost men (Beshimi, Shiki-jo, Hannya… and I can’t remember the fourth one…), as a constant reminder of what they did for him.

He never fully lost his honor, despite the sides he chose. He proved this through both little actions throughout the series. He also proved it with his final decision to side with Kenshin at the end.

He never says it, but his actions tend to show that he cares for Misao more than he lets on, but may feel he is not worthy of her.

There are several options there:

Bonuses and Limitations:
Illusion only creates illusionary duplicates, or displaces his apparent position; Treated as a skill 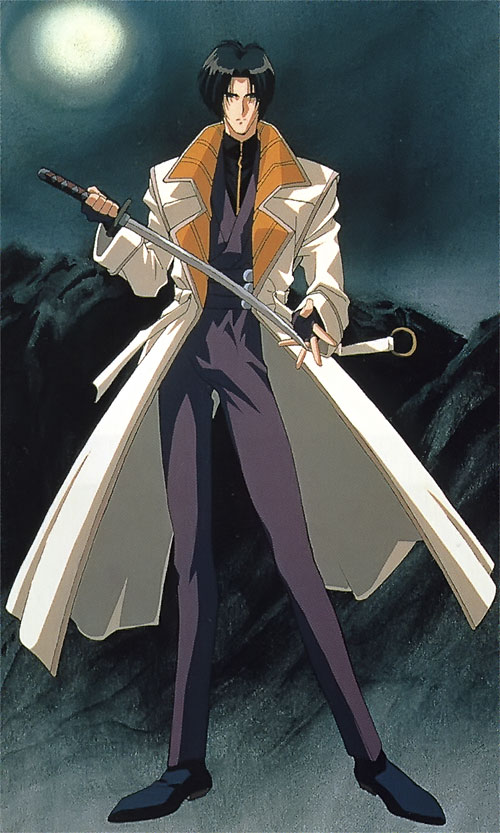 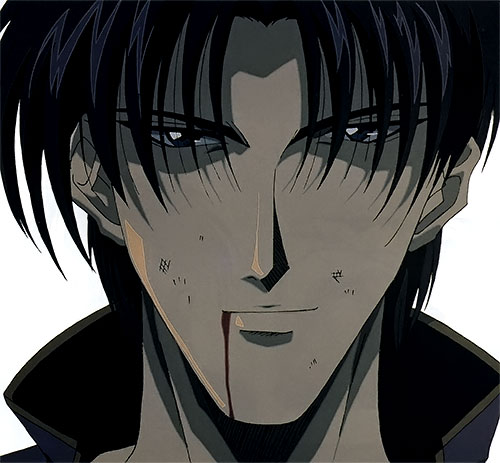