Aquazon can animate water. She can form it into complex objects like guns, or into protective spheres of water.

(See the Super Young Team entry for her time with the team.)

The daughter of Junior Waveman Kimura and the genius daughter of Senior Waveman Otomo (although she only recently learned who her mother was), Kim followed her father into superheroics. He was less than happy with her choice of team, and the celebrity lifestyle she adopted. 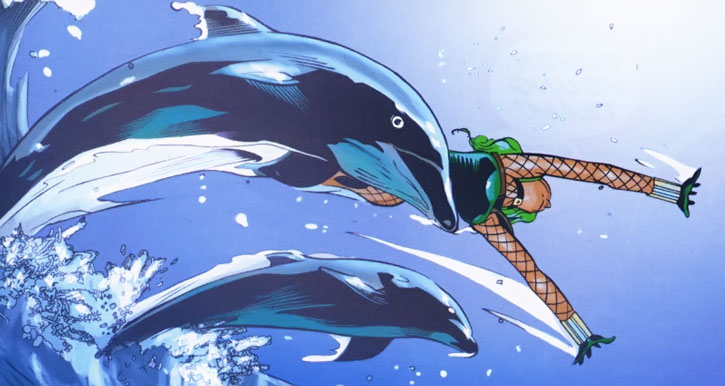 Kim developed a crush on teammate Well-Spoken Sonic Lightning Flash. But she was too shy to tell him – until tense, life-threatening moments when she blurts it out. She ignores Big Atomic Lantern Boy’s crush on her.

Aquazon grew disillusioned with the lack of actual team work of the Super Young Team. She also felt she was being sidelined in fights – and was seen by spectators to be sidelined. Kim quit the team and joined her father, now Senior Waveman, in Big Science Action, Japan’s most reputable superteam.

She found herself out of place on the team, and readily returned to Super Young Team when Superbat called.

In her first appearance she has green skin. In the Dance mini-series it’s only her hair and eyes which are green.

The simplest explanation is to assume the green skin was makeup she was wearing at the time which she later abandoned.

Aquazon isn’t really certain who she is. While she can put on a good performance for her fans she’ll let her insecurities show among her friends. 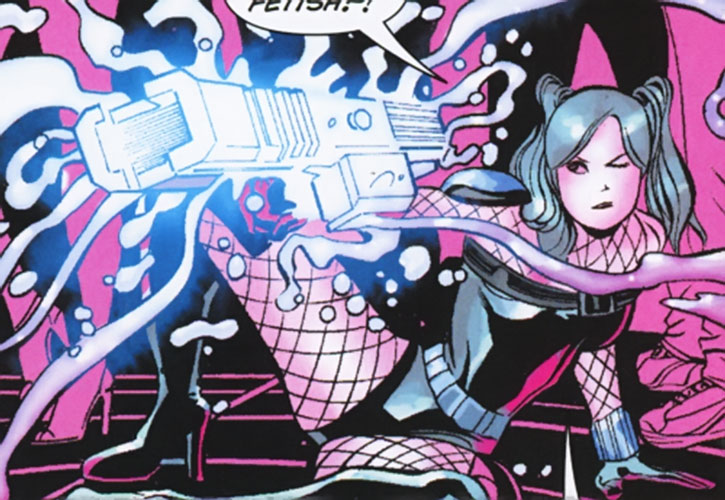 Her insecurities leave her fluctuating between uncertainty and assertiveness.

While her teammates have commented that she needs glasses, Kim is unwilling to do so because she’d look uncool.

“Oh, this is terrible. I can’t seem to tell Sonic Lightning Flash how I feel about him. I’m still too shy !”

“Apologies, father. I know you had high hopes, but I am forever a non-traditionalist. And I suppose if I’m going to find my own way, I need companions who I can relate to. Even if I have grown to actively dislike them.”

Swimming is assumed from one image where we see her with dolphins. And the Water Freedom is assumed from the nature of her abilities. The APs are as speculative as the powers themselves.