The evil serpent-men of antiquity are giant snakes with human-like arms and a vaguely humanoid-like head, tiny compared to what a proportionally-sized snake head would be. They are large — usually standing about 8’ tall — and have great strength and stamina.

Shissars have many innate abilities associated with reptiles – their body heal very quickly, they are powerful swimmers, they see in the dark, they strike with startling speed and they are venomous.

Some say that Shissars can mesmerise their prey with their gaze and by swaying back and forth like the Indian cobra, but this is probably a misinterpretation of a Shissar casting a spell of hypnosis or control… or an excuse for having frozen in fear.

With their strength, speed, bulk and ferocity the Shissar are often fearsome swordsnakes and archers, well-able to defeat a half-dozen times their number in soldiers from less powerful races.

It’s a kind of magic

However, they are more feared for their mastery of magic. Many Shissars are proficient spell casters, and Shissar masters of nearly any school of magic can easily be found at the Temple of Ssraeshza.

Spellcasters can for simplicity’s sake have Sorcery: 05 or more, possibly with a higher SPI. Their Sorcery will be have some sort of Limitation that they can only cast spells from the schools they know.

The Shissars were one of the great powers of antiquity on Norrath, though few traces remain of what was once a mighty empire dominating the continent of Kunark. They rose to power at some unclear point between the Age of Scale, dominated by the dragons, and the great Iksar empire – presumably the Shissar powers were a feature of the Elder Age of Norrath.

As often in the history of Norrath, it was hubris and a desire to challenge the gods that resulted in disaster.

The Shissars traditionally worshipped Cazic Thule , but as they came to dominate Kunark they started to think of themselves as greater than the God of Terror. To demonstrated this they enslaved the lizard-like Iksars , one of the races created by Cazic-Thule.

Whether the Shissars were themselves created by Cazic is unclear. Though their reptilian appearance and their taste for terror and necromancy are quite reminsicent of the God of Terror’s preferences, the Shissars themselves came to claim that they had been created instead by the primordial deity Veeshan , the crystal dragon.

It was also claimed that their perpetual emperor, the immortal and very powerful Shissar warrior Ssraeshza, was himself a demigod. Ssraeshza, the Shissar theologians claimed, was the very son of Veeshan and had created all Shissars from his own scales.

They also claimed that the other gods had grown jealous of the perfection and power of the Shissars, and had stolen Ssraeshza’s strongest divine powers.

The conflict between Cazic-Thule and the Shissar escalated, and the God of Terror may have been the one who pushed for the gods to release one of their weapons of mass destruction against the empire of the serpent-men of antiquity. The deadly, airborne disease was called the Greenmist and killed nearly all that it touched. Soon, the once-mighty empire was ravaged by divine plague.

Whom the gods would destroy

This targeted extinction-level event was not entirely successful. Most Shissar mages were dead or dying, but the very knowledgeable Imperial Wizard T’sharnell still lived.

At the Emperor’s urging, he tried a desperate spell that didn’t quite produce the intended effects, but took him, the Emperor and perhaps a hundred shissar survivors to the moon of Luclin. Being largely defined by their slave-holding practices, they also brought as many thralls as they could. 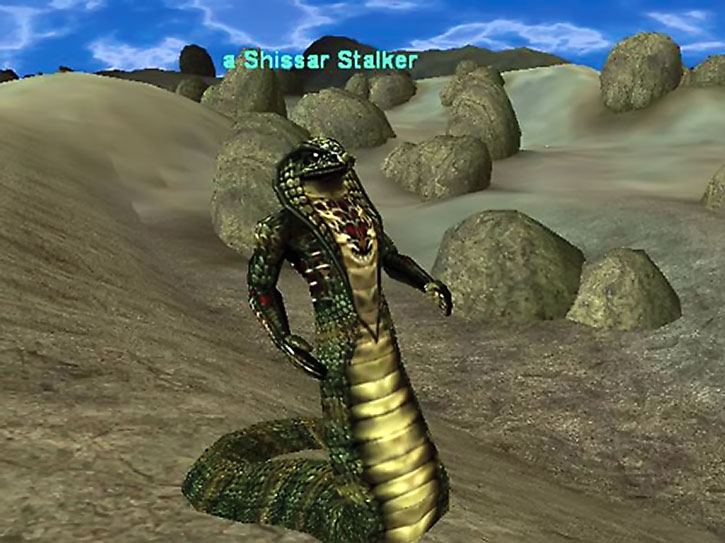 The Shissars, once possessed of formidable arrogance, were at that point culturally traumatised and living in terror that the Greenmist would follow them to the moon. As their slaves toiled to create a fortress in the hostile environment on Luclin, T’sharnell created magical barriers against the Greenmist.

To be even safer, the Emperor ordered to create a gigantic vacuum around their fortress, which even the Greenmist would be physically unable to cross.

T’sharnell and lesser wizards were successful, and blasted the atmosphere out of a large area around the fortress. This region became known as the Grey, an airless mineral desert.

The haggard Shissars were now safe, but their culture ossified. The elder lamented the loss of their great empire, many of their slaves died off, and the youths grew up without having ever experienced the grandeur of the true Shissars.

The life in the mostly-underground fortress (defiantly called the Temple of Ssraeshza) was much simpler and harsher than the imperial life, and they still were afraid.

Meanwhile, on Norrath, the Iksars were free – and eventually assembled an empire rivalling that of their former masters at its height.

During the Age of Turmoil, in the deepest levels of the Temple, a conflict erupted with a strange race of beings, called Thought Horrors  by Humans. At first, T’sharnell’s wards could contain the things from the caverns below, but the wizard sacrificed his life essence to prevent the renegade shissar black magician Vyz’dra and his minions from overthrowing Ssraeshza.

This coup attempt left the loyal Shissars reeling — as the power of Vyz’dra had been great — and deprived them of many of T’sharnell’s more recent wards. Albeit the airless barrier remained at the surface, the Thought Horrors found it much easier to reach the Temple, and they launched a great underground assault against the snake-folks.

Though they had hordes of mind-slaves and burrower worms, the Thought Horrors had underestimated the cruel power of the Shissars, and were repelled. Still, their attack had inflicted serious losses to the serpent-men and their slaves.

The war between the brood of Ssraezsha and the Thought Horrors commanded by the terrible Overfiend  continues to rage under the Temple – in the immense network of caverns called the Deep. Though dreams of conquest were again awakening in Emperor Ssraezsha’s alien mind, the losses from the Vyz’dra plot and the Thought Horrors onslaught made them impractical.

Furthermore, the reactivation of the Combine Spires on Norrath , allowing Norrathian to teleport to the moon of Luclin on a regular basis, created grave concerns that the gods would notice the Shissar survivors and sent the Greenmist anew to finish the job.

Five centuries after the reactivation of the Spires, the moon of Luclin was shattered, presumably killing off the last of the Shissars. However, given their paranoid preparations against godly vengeance, it is possible that there existed contingency plans to survive even such a disaster.

An ordinary Shissar stands about 8’ tall – so their total length is probably about 25’. In the game, more powerful Shissars are larger – I got the impression that Shissar never really stop growing as they age, making unusually old specimen exceptionally large.

Shissars standing between 10‘ and 14’ tall are not rare, and almost always bear some title of nobility, lineage or mystical achievement. Some say that Ssraezsha himself is three times the size of any Shissar.

Shissars are vain, and often wear strikingly elegant and elaborate jewellery and decorations, especially if they are of high status. Shissar craftswmanship for their traditional ornaments – those worthy of the artisanal attention of a real Shissar – is incredible and may rely in part on magic.

Shissar architecture is distinctive, in part because they haven’t built new buildings since the Temple, millennia ago. It features easily-identified, recurrent themes. A striking feature of the Temple are the huge glass tubes filled with water, with large openings closed by magical force fields that will no let the water out.

Being powerful swimmers, Shissars can enter these vertical tubes, swim up or down in but a few tail strokes and exit on another floor.

The core of the Shissar’s evil is their megalomania – they think that they are intrinsically superior to all other races, and pay no attention to them at all. Certain nobles may even pretend not to perceive members of “lesser” races at all to convey how exalted they are. The well-being, customs and desires of lesser races are utterly irrelevant to the Shissar.

The main interaction between the Shissars and lesser races is slavery – Shissars are so great that they shouldn’t have to do any trivial work, and even with their magic that requires an extensive slave force. Shissars do not treat their slaves well though, which poses long-term problems – but they won’t ’lower‘ themselves into treating other species correctly.

A lot of universes have evil serpent-men in their distant past – say, the Marvel Universe via its R.E. Howard heritage. Evil survivors from an immeasurably ancient civilisation of those would be unsurprising in most super-heroes, fantasy and/or horror universes.

The Shissars have many sorts of slaves, including golems. One gets the impression that while the golems weren’t a major source of labour at first (live slaves are cheaper and can reproduce) the circumstances of their exile on Luclin made the golems much more important.

Timeless golems can also operate in the vacuum of the Grey to work around the Temple.

Shissar Timeless Golems have a distinctive look. Though it’s not always apparent to human eyes, they are shaped like a Shissar’s view of a perfect Iksar slave – huge, thick, powerful and with a small, dull head.

Not all timeless golems are identical, but a typical one has the following stats:

Powers and limitations:
Growth is Always On and Already Factored In. 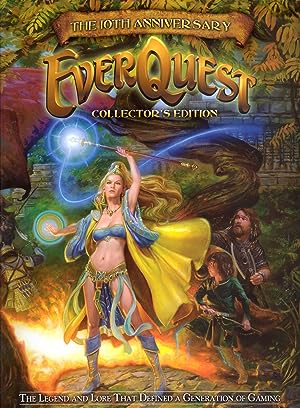 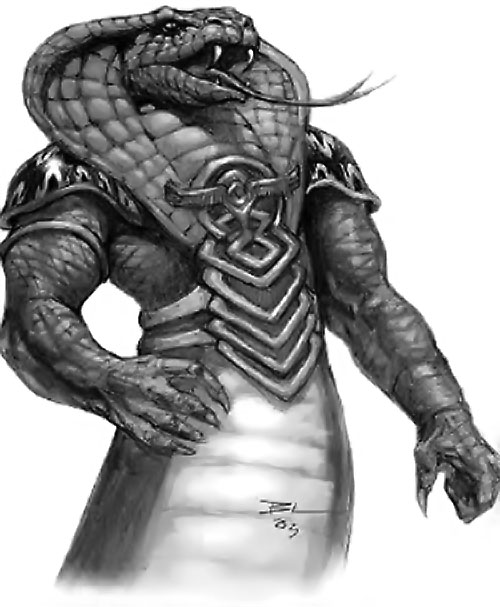 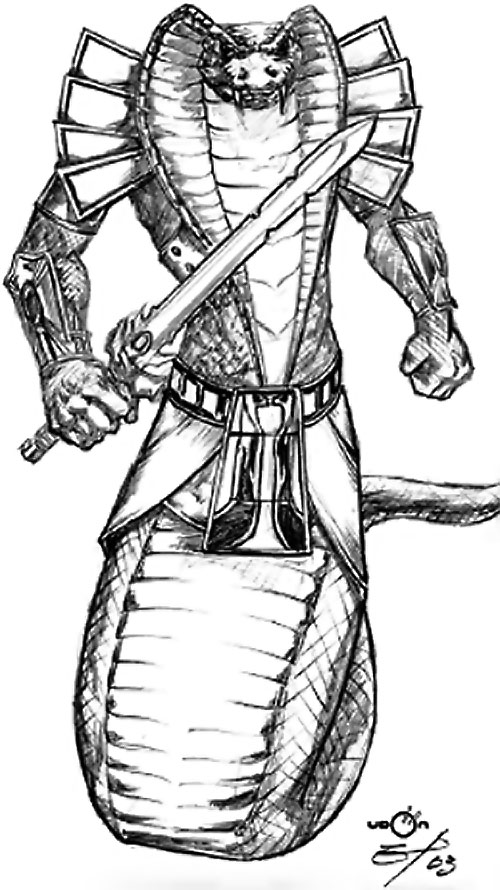 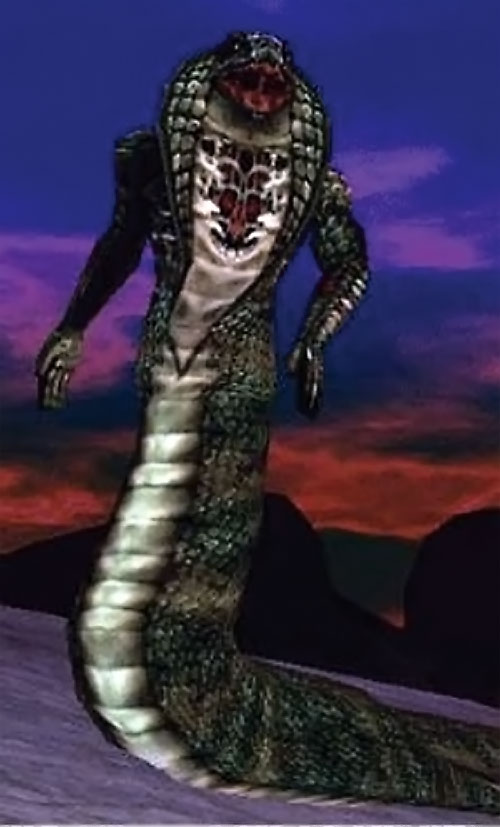 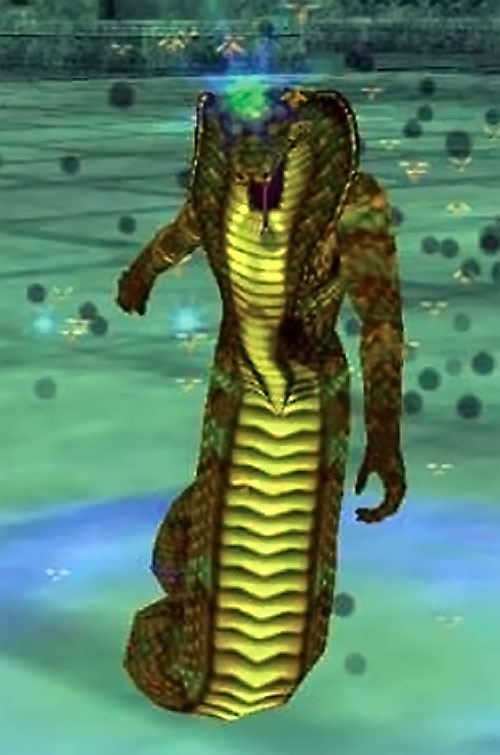 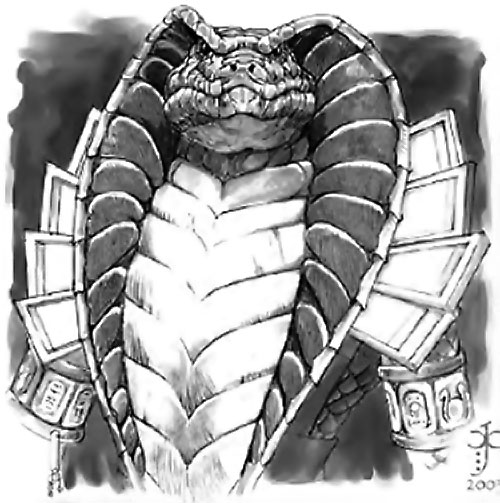 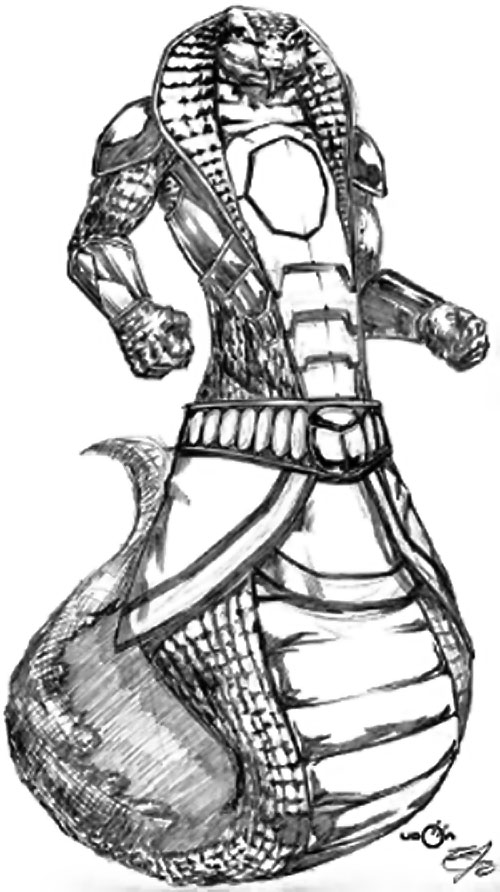 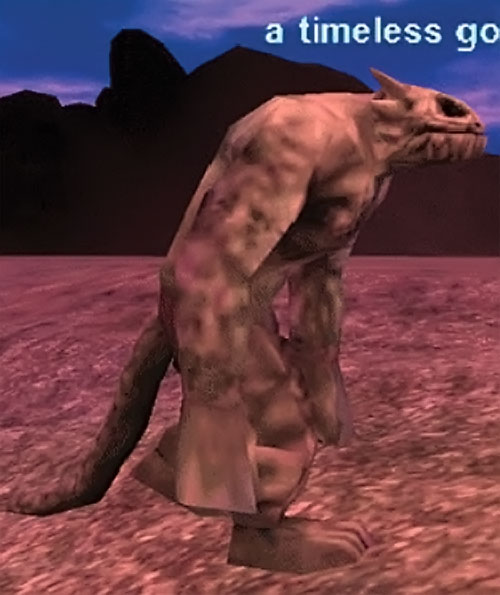 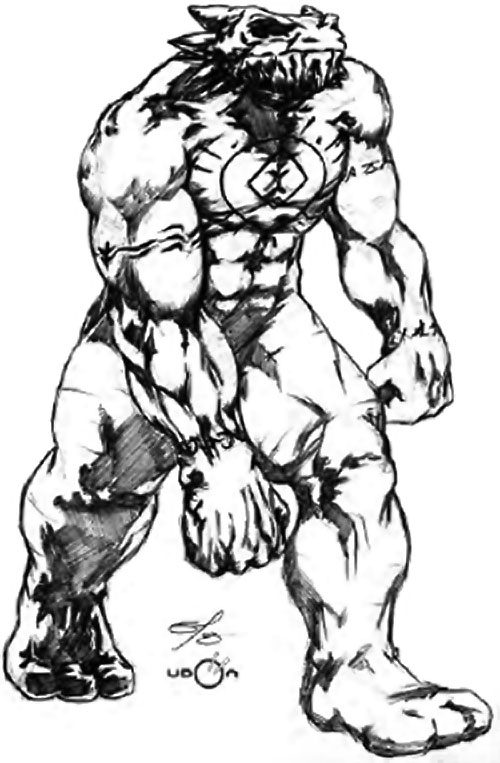