Shiv was heavily trained in the Japanese martial arts since before she could walk. Furthermore, she was subjected to numerous treatments and painful experimental surgeries to make her more than human. She is thus abnormally fast, strong and agile for her age.

Shiv seems to have sub-dermal armour grafted on. She could take hits that should result in serious wounds without apparent tissue damage. There are also retractable blades implanted along her forearms and legs. Cindy once mentioned “work on her armour” despite the blades emerging from her bare forearms – another hint of subdermal plating.

She fights savagely and mercilessly, but with good acumen. In DC Heroes RPG terms, she manages her decent stock of Hero Points  well.

However, after she loses her father, she becomes far less focused and is a markedly less deadly opponent. She still has Hero Points, but doesn’t really use them – though a sudden spurt is always a possibility. She seems to have, in game terms, the Guilt Drawback.

Another hope, another dream…

Shiv uses a selection of weaponry in her adventures :

…another truth, installed by the machine

After she started clashing with the Star-Spangled Kid (Courtney Whitmore), Shiv received further surgery turning her arms into cybernetic ones. It is likely that her skeleton was also reinforced at that point.

She was later seen kicking with superhuman force. So it’s a good bet that her legs are cybernetic, too.

Shiv could lift and throw cars without visible effort, and even ripped an arm off the S.T.R.I.P.E. armour. Howbeit, that last one seemed to require extraordinary effort.

Cindy Burman is the daughter of the Dragon King. The Dragon King a major Japanese occultist and scientist active during World War Two.

A high-ranking member of the Black Dragon Society, he is best known for having used major Western artefacts such as the Holy Grail to erect a mystical barrier around the Axis countries. This barrier prevented most Allied superhumans, such as the Spectre or (in the pre-Crisis continuity) Superman, from single-handedly winning the war.

The mysterious, hooded Dragon King survived the war, and secretly moved to Nebraska. His daughter was apparently born there.

Whether “Cindy Burman” is her actual name is unrevealed, and nothing is unknown about her mother (though one gets the impression that she was Southern Asian, perhaps from an Indian ethnicity). Even if it is not her real name, the Cindy Burman identity has the full paper trail.

The hateful Dragon King treated his daughter like less than a thing. To him, she was but an asset and a future agent, and he took the opportunity to cruelly mould her into a fanatical fighter from birth.

Cindy underwent constant gruelling training regimens, and was tortured for any or no reason to “toughen her up”. Furthermore, she was subjected to various surgeries and cybernetic implants to make her deadlier – occasionally without anaesthesia. 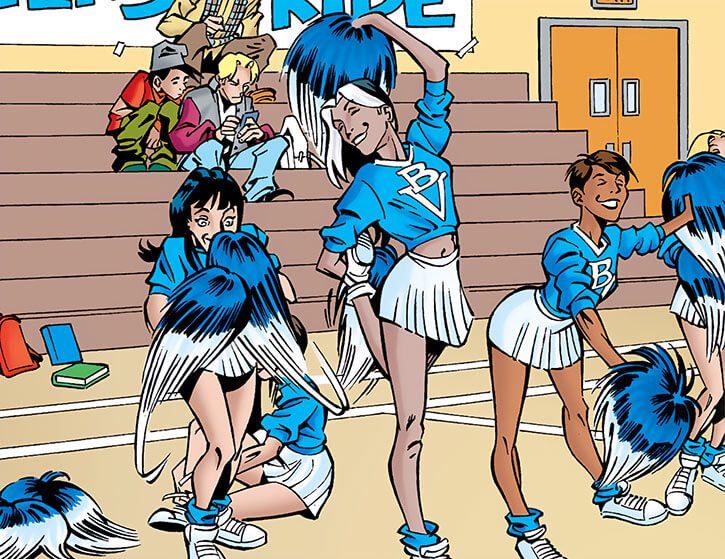 Between this and psychological conditioning, the girl ended up much like a beaten dog. She was broken and pathetically eager to please her father. Despite living in constant dread of the King’s cruelty, she could hide the abuse. Thus, she grew up to become a neurotically overachieving teenager.

In her hometown of Blue Valley, the manically-driven Burman became queen of the high school. She also seduced one Josh Hamman, whom many other other teenage girls were pining after. When a new girl, Courtney Whitmore, came to Blue Valley, Cindy manoeuvred to have her ostracised in case she was a potential rival.

In 2000 the Dragon King had his daughter graduate to wearing a costume, wielding special weapons and using the code name “Shiv”. Bursting with pride, Cindy relaxed her vigilance. As a result, Josh came to realise how much of a pathological control freak she was.

When he dumped her, a mix of teenage emotions and terror of failure led her to support her father’s master plan, about which she previously had reservations. It involved killing all adults in Blue Valley, and billions worldwide.

Shiv publicly launched the Dragon King’s plan in Blue Valley, appearing during the halftime of a football match and wrecking everything. New local hero the Star-Spangled Kid (secretly Courtney Whitmore) responded along with S.T.R.I.P.E. (a suit of armour secretly worn by Pat Dugan, Whitmore’s stepfather).

Shiv took out S.T.R.I.P.E. with her dragon staff and nearly drowned the Star-Spangled Kid – but Courtney ultimately defeated her after a brutal fight.

Still battered and bleeding, Shiv was dragged away screaming by servants of her father to be again operated upon. This time her skeleton was reinforced and her limbs were hacked away to be replaced by super-strong cybernetic prosthetics.

The lab of the Dragon King’s head scientist, Dr. Graft, was then invaded by the Star-Spangled Kid, S.T.R.I.P.E. and their ally the Shining Knight (Sir Justin). Seizing the occasion, Cindy escaped from her cell. She then forced Graft’s assistant to tell her the real name of the hated Star-Spangled Kid.

By the time Shiv recovered from the blast, the battle was over. In shock, she swore that she would avenge the death of her father. At this point, the horrific Johnny Sorrow appeared and recruited her for his Injustice Society.

On joyless lanes we walk in lines

Shiv served in several versions of the Injustice Society. With the exception of the roster led by Legacy (actually a disguised Wizard (William Zard)), these were Johnny Sorrow’s footsoldiers. Her colleagues included the likes of Geomancer, the Icicle, Killer Wasp, Blackbriar Thorn, Rival or the Tigress.

Though Sorrow was clearly inhuman and murderously insane, the damaged Shiv adopted him as her new father figure, making it trivially easy for the cruel Sorrow to manipulate her.

Shiv performed fairly well as an Injustice Society field operative, repeatedly clashing with the Society’s designated enemies the JSA. However, she eventually discovered that Courtney Whitmore (now Stargirl) had grown more powerful than her. She attempted to murder Whitmore with a large-calibre firearm despite Sorrow’s orders to take Stargirl alive, but he had her stand down.

Burman soon understood why. The insane Sorrow wanted to elope with Whitmore, and to that end he betrayed Shiv and the rest of the Society. This forced Shiv and her colleagues to ally with their JSA foes to fight the mystical principality the King of Tears, which Sorrow had just summoned.

The King of Tears was repulsed, but the unconscious Injustice Society members were arrested and imprisoned.

Shiv hasn’t been seen since this 2010 incident.

Shiv seems to be half-Japanese and half-Indian. However, her skin was erroneously coloured Caucasian-ish in her JSA appearances. And in the fine comics tradition it varied wildly even before that.

The neurotic Shiv is a compulsive overachiever. This is mostly in a futile attempt to please her father and make him proud, and partly to compensate for her horrific upbringing by gaining safety through a complete control of her environment.

To please her father she owns every aspect of the archetype of the good American girl :

She is creepily obsessive and ego-ridden about this, though nobody can guess that it’s a desperate attempt not to be tortured.

Cindy is overcontrolling. She manipulates every school clique, treats the cheerleading squad and her boyfriend as her property, dresses in microskirts and tight white blouses to ensure that most boys are looking at her and most girls are jealous of her, struts around like she owns the school and is the coolest and most assured human being ever, etc..

While this is all motivated by neurotic fear, she acts as a control freak with a gigantic ego. She’s also a bully who will use the whole arsenal of high school girl harassment to assert her dominance.

If her father can see her in battle she will fight like a cornered rat. This is again out of fear of torture. She will use any tactic available to her and fight with manic brutality, doing everything she can to win. She’ll also insist that this is all out of love for her father.

With the apparent death of the Dragon King, Shiv lost direction and focus. She didn’t know what to do on her own.

She’s a dysfunctional mess of neuroses, hatred and fears and doesn’t have anything to guide her. Presumably even she knew on some level that considering Johnny Sorrow her new father was as demented as it was unworkable, and bound to end in abuse and disaster.

“I baked a whole batch of my special cupcakes, Josh. Do you like the decorations ? I was the coordinator, you know. Interior decoration must be a natural gift. Like my singing. And cheerleading.”

(As Courtney tries speaking to Josh, Cindy points at her dental braces) “Nice metal wear. You could crack a walnut with those choppers. Now go sit in the back. Those seats are taken.”

“They all listen to me. Jocks, geeks, burn-outs… and whatever group you’re in, darling.”

“No matter how many soldiers you summon, we’ll win !”

(Yelling and struggling as her father sends her to be tortured again) “No more tests ! No more needles ! No ! I’m a good daughter ! I am !”

(As her forearm’s skin gets shredded she proudly shows her cybernetic limb with an insane grin) “[My dad is proud of me !] He loves me now !”

(Crying after the seeming death of the Dragon King) “F-father. I failed you. What do I do now… what do I… I’ll kill her. And everyone she cares about… I’ll…”

“When you and that knight slayed my father, I didn’t know what I would do. He was the only one that ever loved me. The way a father should. But I found a new family. Sisters, and brothers. A new father. And after we’re through with the JSA, Sorrow’s promised me a trip back to Blue Valley… where I’ll tear S.T.R.I.P.E. apart and feed him piece by piece to Pat.”

Drawbacks:
Age (Young), Guilt (see below), SIA toward pleasing her father or a father figure, MIA toward being a control freak, MPI, Minor Rage, SIH of the Star-Spangled Kid/Stargirl and S.T.R.I.P.E..

Before she received cybernetic limbs and a reinforced skeleton, Shiv had a STR and a BODY of 05.

Furthermore, she developed Guilt after the Dragon King was seemingly slain. Her HPs total then started to erode significantly as she lacked direction and was struggling with her neuroses. Her HP total as an Injustice Society member was about 020 – or perhaps even 015.

Shiv occasionally operated with the backing of the Dragon King’s young, costumed and hypnotized servants. Those are no longer available after the destruction of the Blue Valley base.

Equipment:
Some have smoke grenades to cover their escape.

Source of Character: DC Universe (primarily the Stars and S.T.R.I.P.E.S. and JSA series by Geoff Johns.) 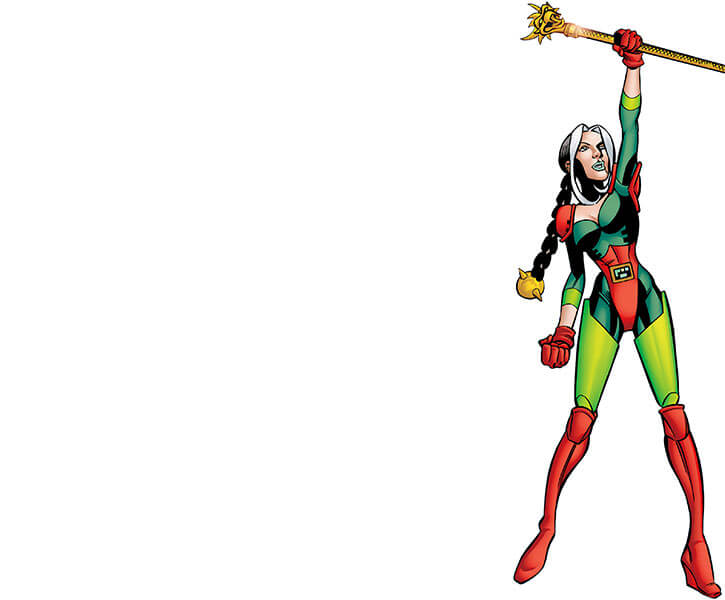 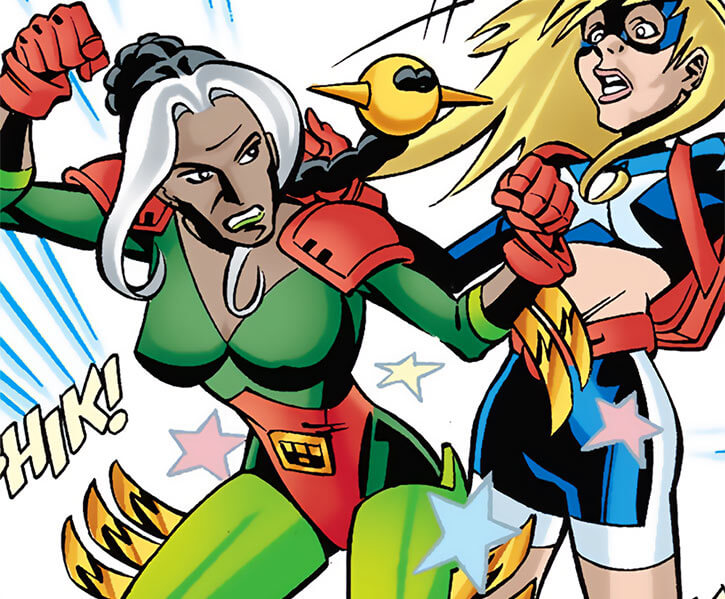 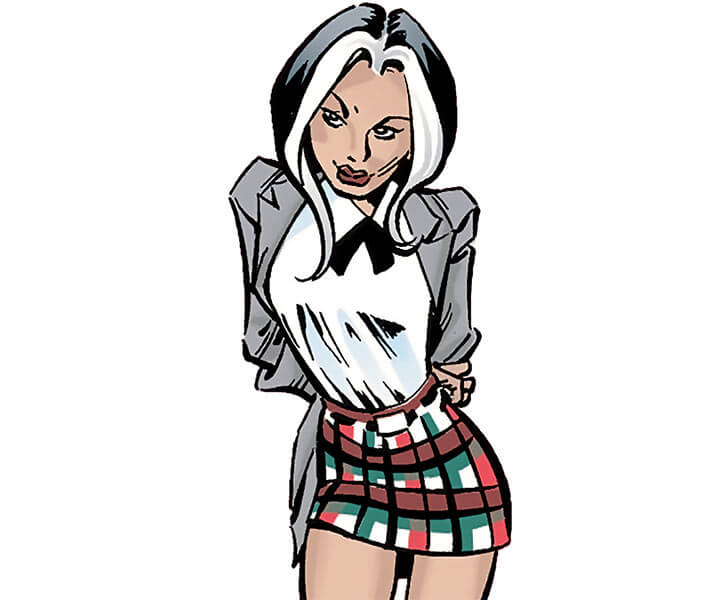 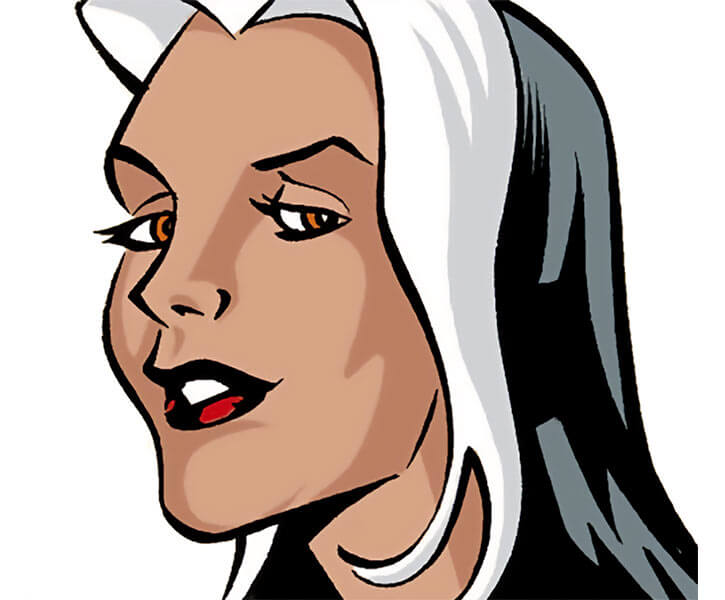 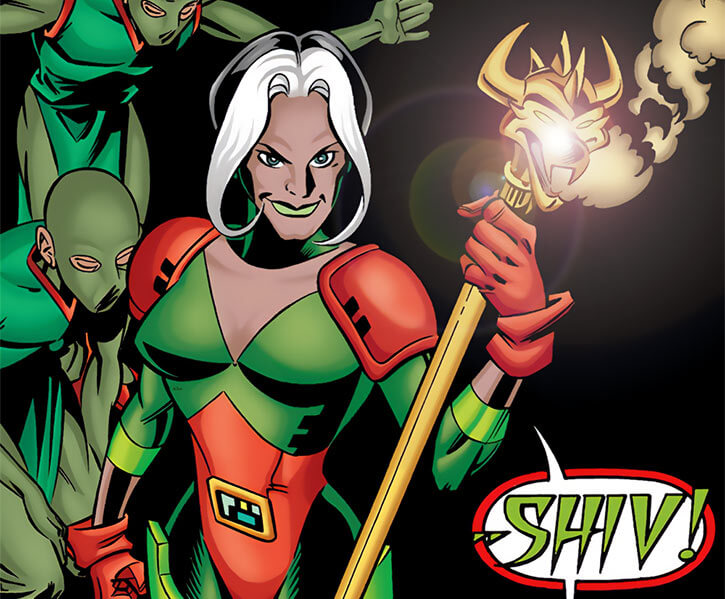 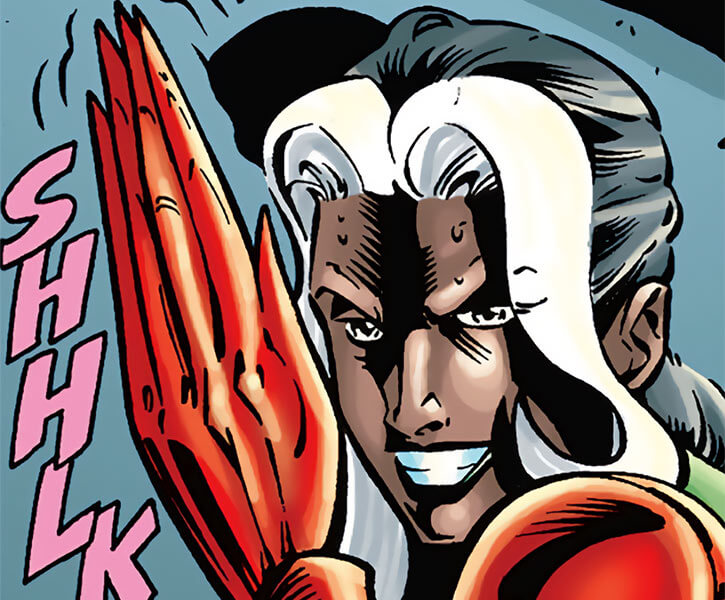 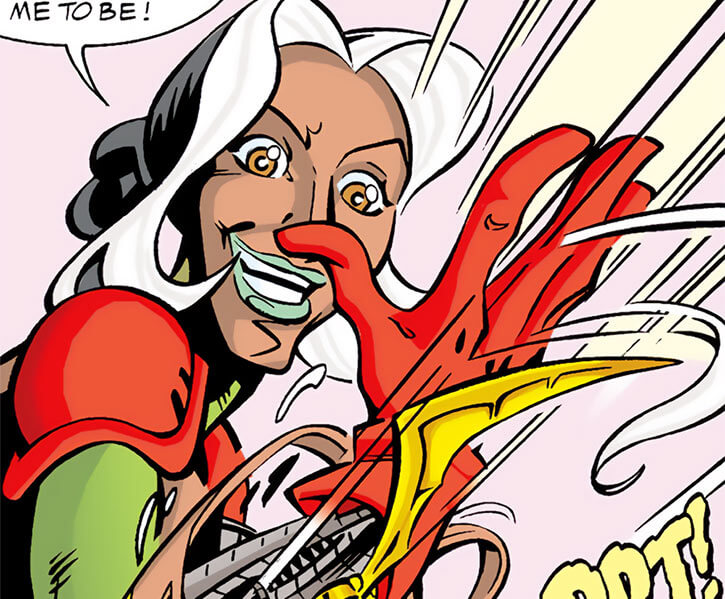