Shockwave is a competent brawler with a forceful, stocky physique.

He wears a suit of power armour that is strong enough to tear down a four-story building, or to throw a gasoline-carrying eighteen-wheeler with a full trailer, and with enough armour plating to resist heavy weaponry. The suit is very heavy, and with its strong motors can emit powerful shock waves when Schiffel stomps the ground.

See the game stats section for some additional detail about the suits.

Schiffel’s skin is usually depicted as being chalk white, even when he’s not being Shockwave. This may indicate superhuman enhancements, and it is thus entirely possible that he possesses some degree of superhuman strength (STR 06 ?) even when he’s not wearing power armour. From the material, however, his durability when out of armour is unlikely to be above 05.

He’s competent enough fighter to tango with very agile opponents such as Blue Devil, or to hit skilled martial artists such as Gangbuster. He obtains these results both with his surprisingly solid Martial Artist, and a willingness to spend HP on AV if that is not enough.

Shockwave was one of a number of mercenaries with connections with the high-tech conspiracy called The 1,000, which arose in Metropolis during the Reagan years. It is vaguely possible that he was a trucker at some point, given his theorised use of a semi as a mobile base.

In his first documented contract, Schiffel apparently served as an agent for Metallo. Shockwave was to break into a S.T.A.R. Labs installation and steal the product of the current research from Dr. Jenet Klyburn – a form of enhanced kryptonite.

The theft was successful and the Blue Devil, who was accidentally drawn into the situation, could not stop Shockwave from making his way to the rendez-vous point with a 1,000 aircraft. At the last second, however, the Blue Devil managed to snatch the kryptonite canister from Shockwave.

Some time later, Metallo was defeated by the Blue Devil and Superman, and Shockwave simply waited for a few months in Metallo’s old hideout for something to happen. He eventually ran into two former henchmen of Metallo, who had come back to steal everything.

Stumbling upon the cover of some magazine, Shockwave saw that the Blue Devil was becoming famous in Hollywood, and decided to go there to gain his revenge for foiling his previous contract. He pressed the two hapless henchmen into his service. 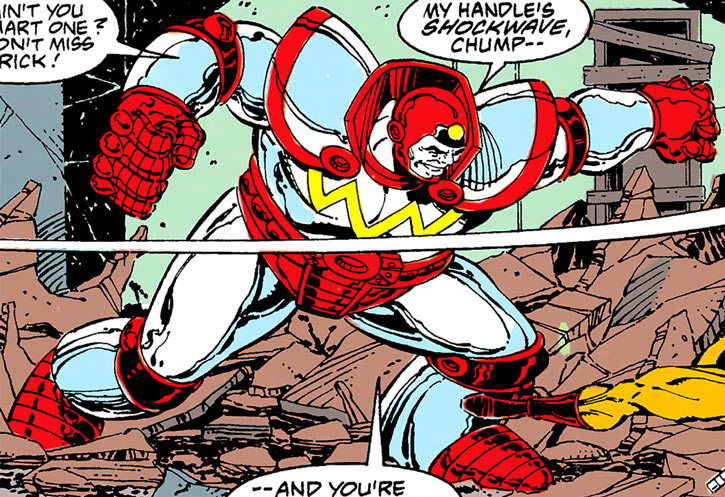 Shockwave found and fought the Blue Devil during a premiere, and was faring well until the Devil was possessed by an actual demon – coming from the same realm as Nebiros. Using its mystical powers, the demonic entity quickly defeated Shockwave, who was arrested, pried out of his armour and incarcerated.

Schiffel was imprisoned in the Nogales Maximum Security Prison in California, but The 1,000 later launched a paramilitary raid there to free him, killing seven guards and wounding nine. They also repossessed Shockwave’s armour, and sent him on a mission of destruction against Goldstar, Inc. – the company owning the Booster Gold trademark.

Shockwave was quite flattered that he worked for an important mob, and enthusiastically attacked the Goldstar building. Booster, whose energy reserves had been weakened, couldn’t stop Schiffel and the building was destroyed.

Though Booster was outmatched, he managed to destroy Shockwave’s suit by jamming a fire hose into a spot where the armour plating had been pierced. 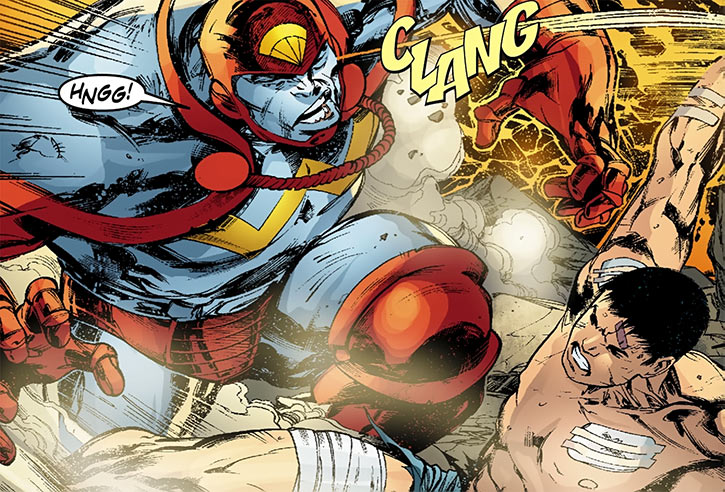 Shockwave was next seen after Intergang hired him as muscle to escort their assassin Chiller during a campaign to strengthen their influence in Metropolis. The two villains found and attacked the vigilante Gangbuster, easily defeating him. Chiller copied Gangbuster’s appearance to enable the next part of the plan, then left ; Shockwave stayed behind to kill Gangbuster.

Schiffel collapsed a building on the defeated vigilante, but Gangbuster managed to escape from the building, which fell on Shockwave. Shockwave survived, but was stunned for a while ; when he emerged from under the rubble, Superman had come to check on Gangbuster, and easily defeated the dazed Shockwave. Schiffel soon confessed the location of the Intergang base for this operation.

Shockwave was not seen again in publication for the better part of fifteen years. At some point during the 1990s or the early 2000s, he underwent a special treatment which made him larger, and had his armour adapted to his new physique.

Schiffel was briefly seen as a mercenary working for the Brain and Monsieur Mallah, but was easily defeated by the new Outsiders – Thunder jumped on him and increased her density, which drove them both through the floor. Shockwave was too surprised to react, and Thunder and Jade swiftly knocked him out.

Shockwave was one of a large number of minor supervillains who, in 2004, heard that Superman was now much weaker and tried to take on him to bolster their rep. A number of allies came to help the man of steel.

Shockwave fared well against Superboy, using his jump jets to grab him in mid-air and slam him into the ground. He then threw a whole tractor-trailer rig full of gasoline at Suberboy, nearly killing him. However, Superman then confronted the assembled villains and hit Shockwave with what seemed to be his full strength, knocking him out.

The criminals, fearing that Superman had somehow been restored to his full might, fled. Meanwhile, Superman passed out from the strain of delivering that blow – as he actually was still greatly weakened.

After this defeat, Shockwave approached the successor organisation of The 1,000, The 100, and hammered out a deal to have an entirely new Shockwave armour developed and built for him. Part of the deal was that he would work for The 100 until the value of his services paid for his new power armour. 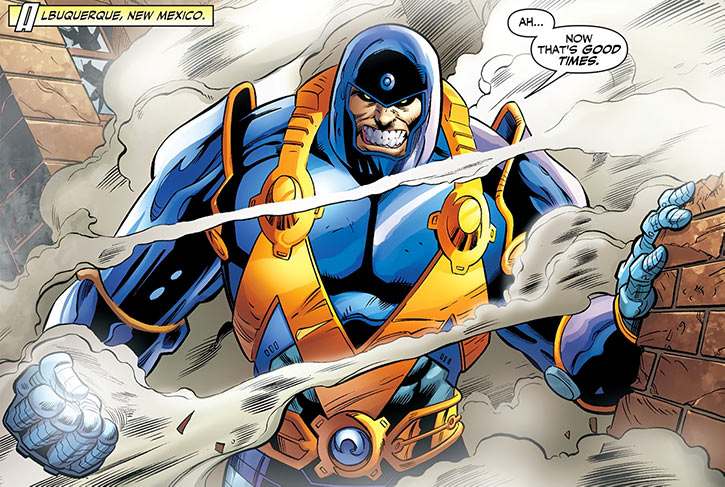 During the year when major heroes, including Superman, dropped from sight, the main defender of Metropolis became Booster Gold. Shockwave clashed with him, likely as part of his contract with The 100. Schiffel was defeated, though the fight was not entirely documented. After that defeat, Shockwave’s new blue-and-gold armour was seemingly confiscated by the police – since by his next appearance he was back to his old suit.

Perhaps because of this failure, the relationship between Shockwave and The 100 went sour – Shockwave felt he had now worked through the full amount for the contract, but The 100 insisted that he still owed them (perhaps Schiffel did not understand what a discount rate is).

The conflict quickly escalated, and Shockwave decided to start thrashing companies he knew to be fronts for The 100 in order to intimidate them into dropping the matter.

One of his early strikes took place in Phoenix, AZ. The Teen Titans responded and engaged him, but the immature and showboating Kid Devil ruined the strategy designed by Robin, and Shockwave managed to beat the Titans back and escape. Some time after the Phoenix fight, he even managed to recover the new, more sophisticated suit of armour he had been wearing during his fight with Booster Gold in Metropolis.

Shockwave continued to strike at fronts for The 100 throughout the US, wrecking large amounts of property in his attempt to get out of his contract. When he hit a Kord Industries site in Albuquerque, he was opposed by two Titans, Kid Devil (who wanted to atone for his previous mistake) and the new Blue Beetle.

Though Shockwave initially outgunned both kids, Kid Devil suddenly emitted unprecedented levels of heat from his hands and melted through Shockwave’s chest plate ; his armour wrecked, the villain was soon defeated and arrested

Several persons have commented on Shockwave’s smell – apparently he has a BO issue which he inefficiently tries to combat with cheap aftershave.

A big, confident – even brazen – and uneducated thug, who really likes the power and toughness of the Shockwave power armour and is looking for even more power. When he wears the suit, he’s proud of his ability to do whatever he wants and to ignore conventional law enforcement, and enjoys opportunities to fight. 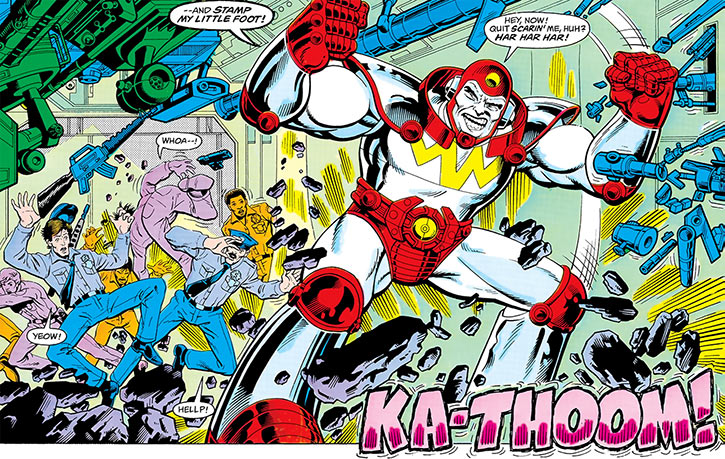 Shockwave seems to have very poor initiative outside of a brawl, and if he’s not hired to close a contract it is likely he’ll just wait around and do nothing special. Even if he’s provoked by events into doing something he will likely prefer a ’strategy‘ relying far more on brute force than any common sense. Still, his actual fighting skill shouldn’t be underestimated.

Being aware that he’s dumb and undereducated, Schiffel dislikes smart people and likes beating them up – he’s also very wary of anything that looks like an attempt at confusing or manipulating him, since he knows he can easily be outsmarted. He was also sensitive about his height, feeling that 5’9” was short, and still has a jealous streak despite now being much taller than before.

A nice guy all around !

“Awww chief — you guys are gonna frustrate me ! And when I get frustrated, I just have to hold my breath… and stamp my little foot !” (KA-THOOM !)

“Convinced, cops ? Startin’ to get the message ? Or do y‘want me to bring the whole damn city down around yer ears ?”

“Ya think yer such a smart guy, don’tcha… prob’ly a straight A student… well, smart yer way outta this !” (WOOSH)

“You showboat heroes strut yer stuff around like ya own the world ! Well, ya don’t own Shockwave !”

“Boy, ain’t you the smart one ? You don’t miss a trick ! My handle’s Shockwave, chump — and you’re gonna be thrilled ta death to meet me ! Haw haww, get it ?”

Don’t be left behind – enlarge yourself now !

At some point between 1991 and 2003, Schiffel underwent a treatment to increase his stature, and had the Shockwave armour retrofitted to accommodate his new size. This simply means he now has Growth: 01, Always On. His unarmoured STR and Physical RV increase by one AP over the noted values, and the /STR/ of the Shockwave suit becomes a respectable 15. His armoured RV is not enhanced, though.

Shockwave’s strength-enhancing exoskeleton made him significantly superior to mid-range heroes such as Booster Gold or Blue Devil, but he’s likely to be overwhelmed when facing stronger opponents – he has few Hero Points, so anybody who can gain RAPs against him is likely to win the fight. This is doubly true since he likes spending a few HPs on the AV of many of his blows, leaving him short for LDD. 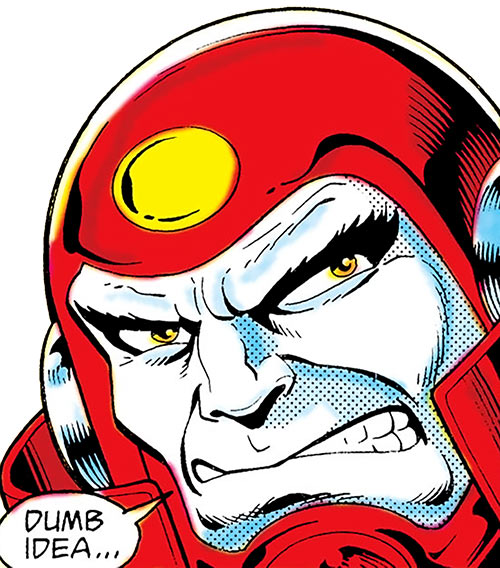 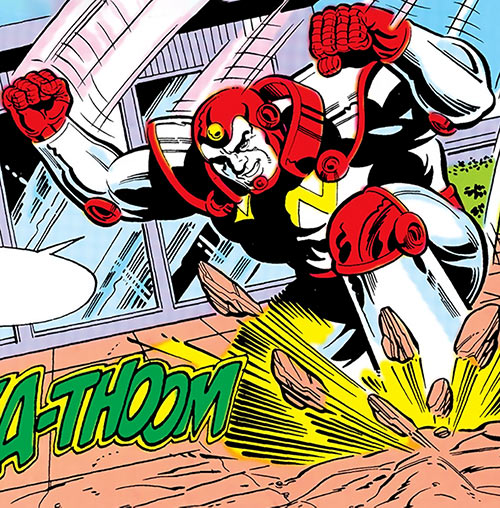 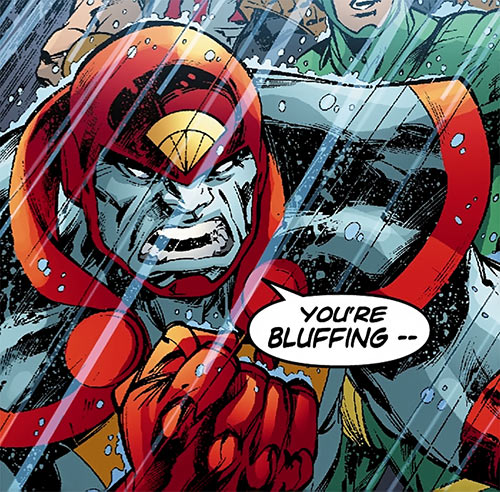 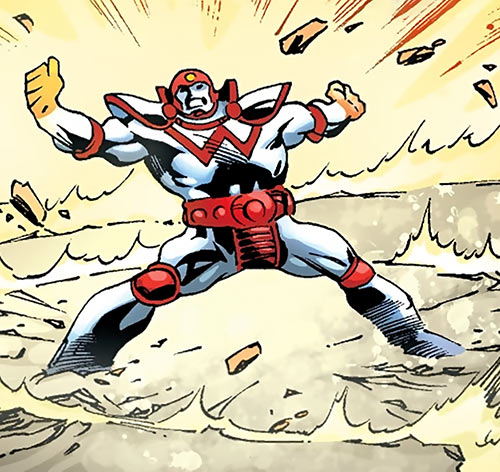 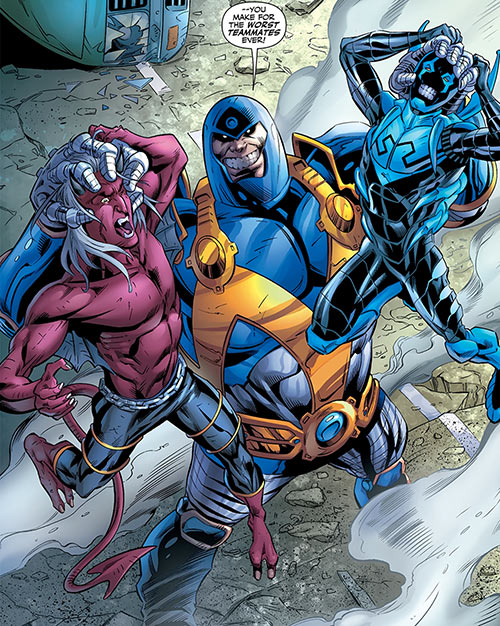 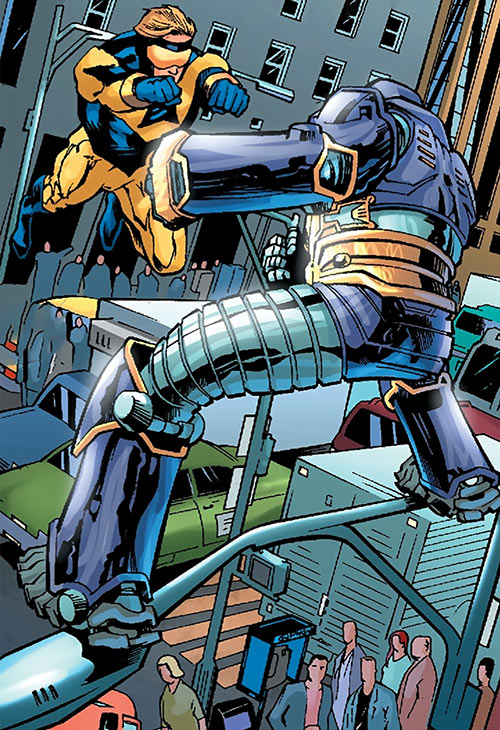 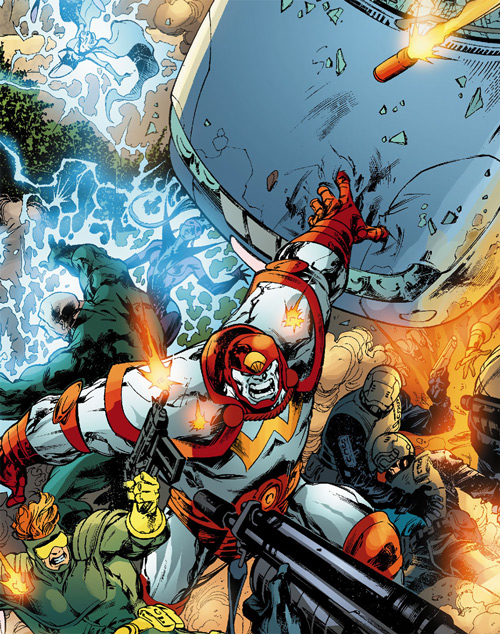