Shotgun is an experienced soldier with extensive Special Forces and commando experience. He’s an expert marksman with pretty much any firearm, and quite fearless.

His main asset is incredibly expensive weaponry. That includes super-armoured vehicles and dozens of kinds of advanced ammunition for his “shotguns”. Some of those shells seem on the level of a 500lbs bomb.

Shotgun doesn’t have much in the way of tactics or subtlety. However, he seems adept at tracking people down and arriving on the scene at a critical moment. How he does it is undocumented.

Once he’s there he just stands and blasts everything to pieces with his overpowered guns. Since he can blow everything up, chances of serious return fire are minimal.

When Shotgun II was first seen, he had been hired by the director of a top-secret government lab working in genetic research. An animal rights activist had just hit the farm under which the secret lab was operating, documenting the inhumane conditions of the animals before freeing them. The problem was twofold :

Armed with a brand new and very expensive shotgun-like weapon, Shotgun tracked down the activist, Brandy Ash. However he soon realised that she was operating along with Daredevil. Bach then, DD was deep into a crisis about his life and was aimlessly wandering around. Daredevil took out Shotgun, breaking some of his ribs. This forced the agent to walk away.

The director had Shotgun go at it again. The man was driven both by hatred toward his daughter – and by his puerile, reactionary obsession about Number Nine as the “perfect woman”. This time, Shotgun was packing an even bigger gun and driving an armoured fast attack vehicle. But Daredevil managed to have the FAV crash.

After this complete failure, Shotgun conducted some undocumented foreign operations. He then went back to working in the good ol‘ USA. This time he was hired by the government to take out the heads of the very powerful Mafia Carbone family. These were forging promising links with European organized crime, but didn’t have government ties to protect them.

However, at the same time, the Punisher (Frank Castle) was working on the Carbones. As “Johnny Tower”, he became the don’s main man and, secretly, the lover of his daughter Rosalie Carbone. As the Punisher, he was slaughtering the family’s made men and associates.

Tracking down Castle, he saved him from the deathtrap the Carbone men had left him in. They then decided to ally. Although the Punisher was a wanted man, Shotgun knew him back in the Army, and liked him and his style. With the help of Shotgun and his arsenal, the Punisher was able to abandon subtlety and infiltration. They could directly assault the Carbone mansion.

He and Shotgun cut down tons of muscle, but missed the don. They tracked him to a tropical Island, where Shotgun’s ridiculously overpowered weaponry slaughtered the don’s troops. This led to Don Carbone’s death at the hands of the Punisher.

Shotgun was later seen investigating a new drug introduced by Haitian revolutionaries on the US market. The Haitians were attempting to raise money for their struggle.

The trail led him to Daily Bugle employee Glory Grant. Ms. Grant did not know that she was periodically possessed by the spirit of the dead Haitian witch Calypso, who was using the drug for her own purposes. Shotgun came to arrest the flabbergasted Grant, but ended up defending her against the Zombie.

Shotgun, attracted to Grant, spent the night at her place to “ensure her security”. During the night Calypso, possessing Glory, had sex with Shotgun without Grant’s knowledge. Grant and Shotgun then investigated a sunken vessel where they suspected a major shipment of drug would be found. But they were attacked underwater by more zombies.

Shotgun, taken by surprise, became stuck under a huge anchor with very little air remaining. He saved Glory with his harpoon gun, but was going to drown. Glory, possibly under Calypso’s guidance, injected him with the concombre zombi-based drug. This made Shotgun cataleptic. As such, he could survive for several days on the last few remaining minutes of air.

Shotgun was eventually recovered alive. Glory told him that, although she didn’t remember their night together, Calypso’s actions while riding her had only been possible because she was in fact attracted to him. They started a relationship, which apparently only lasted a few months.

Hand on the pump

In 1995, Shotgun was hired by S.H.I.E.L.D. to bring the Punisher in. He managed to track the Punisher down, and intervened just as the highly dangerous assassin Stone Cold was about to kill Castle. Shotgun casually killed Stone Cold, then took the Punisher into custody.

In 1998, Shotgun joined in the hunt for Spider-Man. That one after the arachnid hero was accused of choking street scum Joey Z to death. The Daily Bugle offered a $5M reward, which sent numerous bounty hunters after Spidey. Meanwhile, Norman Osborn manipulated the Punisher into going after Spider-Man.

Shotgun and the Punisher found Spider-Man at about the same time, as he was being surrounded by an armed mob. However, the Punisher realized he had been tricked. As a result, he opposed Shotgun’s attempt on Spidey’s life.

Their clash was interrupted by the Green Goblin, who bombed the warehouse where they were having a standoff. However, both men survived.

The Punisher later got the drop on Shotgun. Holding a gun to his temple convinced Walker to help Castle round up some criminals who were after Spider-Man and Jimmy Six. Shotgun agreed on the condition the Punisher didn’t kill the crooks, so he could get the bigger bounty.

Shotgun appeared once since. However, he was mysteriously back to using conventional weaponry, such as a Remington 700 sniper rifle and ordinary handguns. He was after an underworld contract on the head of lawyer Matthew Murdock this time, but was brutally defeated by Daredevil.

An overconfident, shallow soldier in love with technology – the more expensive, the better. In fact, wielding expensive equipment is a kick even if the gear markedly under-performs.

Walker is just interested in humongous hardware, lots and lots of money and the thrill of hunting, killing, slaughtering people and blowing stuff up. He’s a big macho man about it all, and he ain’t afraid of no man. He can work both for the feds and as a freelancer – whatever fits your scenario best.

“Blasted $10,000 gun and the first round fell short of range ! That’s the Army for you. Second round fired just fine, though. Think I’ll go view me a blackened corpse.”

“I work for a government agency so secret even I don’t know its name.”

Shotgun : “The plane’ll autopilot out into the Gulf of Mex until it runs out of fuel.”
Punisher : “You must be on a big expense account.”
Shotgun : “I dunno. Nobody ever asks for my receipts.”

Gloria Grant : “Why do you keep starin at my…”
Shotgun : “Pendant. It’s a very unique pendant.”

“No need to thank me. Just doing my job. Keeping the streets safe for democracy… by exterminating the vermin who infest it.”

“You’re acting like I should be afraid of you, Castle. You forgetting who you’re dealing with ?”

Equipment:
Shotgun II is well known for the outrageously expensive equipment he gets from US military and intelligence. He lurves this stuff, and it sometimes seems his main job is to test weapons, vehicles and gadgets in the field. 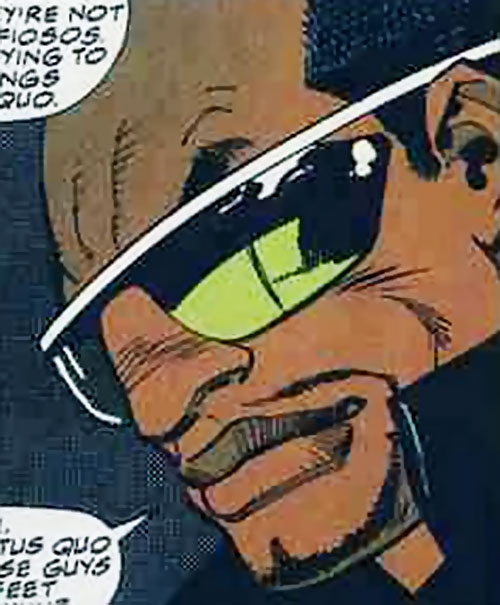 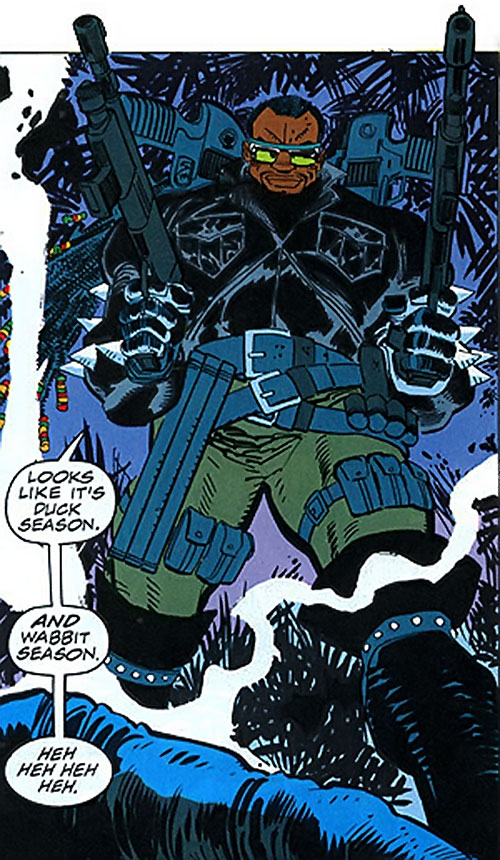 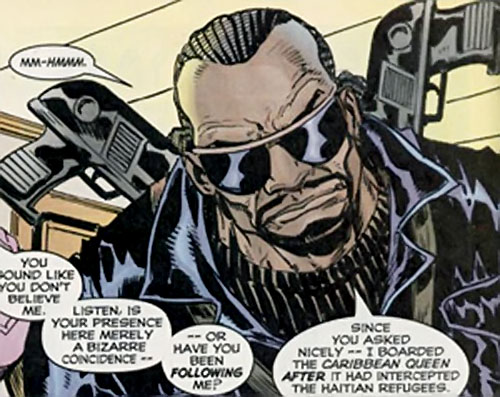 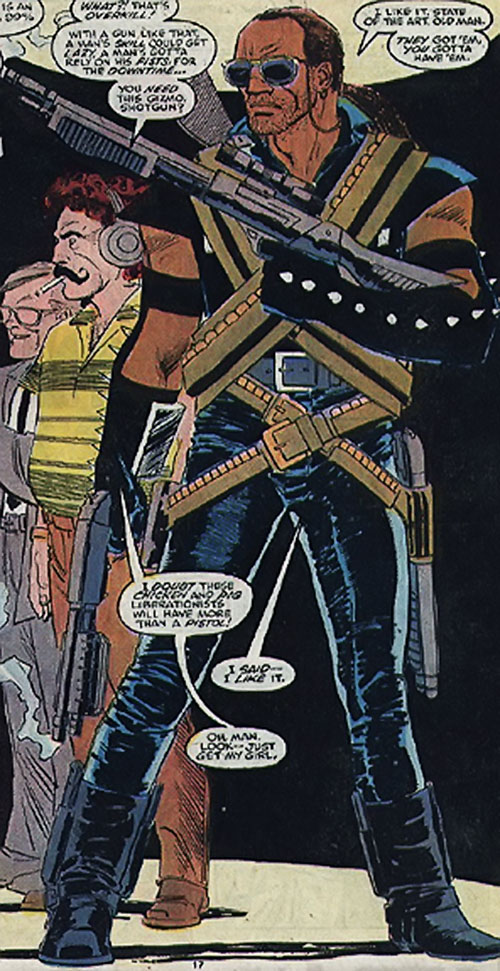