“Shotgun” Smith is an exceptionally persistent and experienced detective. He is also a courageous (if impulsive) professional in tactical situations, with excellent reflexes and accuracy. He was once reputed to be Gotham’s toughest cop.

Shotgun also remains a formidable brawler, even though he’s now slower and out of shape. If fighting becomes a matter of pride, he’s still able to defeat confirmed martial arts professionals.

In his youth, he was strong enough to tear 1970s car doors free and use them as weapons. He could also threaten Batman (Bruce Wayne) in hand-to-hand combat. But the latter seemed to be a mix of successive high rolls and Hero Points.

Smith used to have a fine, detailed knowledge of several rough neighbourhoods in Gotham City. This is no longer feasible as a county official, though. The area is much larger and spread out, and Shotgun’s knowledge of it is thus coarser. But it remains useful.

“Shotgun” Smith is still admired in some quarters for his Gotham City career. He’s one of the local policing legends.

Since the 1990s he’s been partnering with Deputy Cissy Chambers, an unusually competent officer.

His “sidearm” famously is a double-barrelled side-by-side 12-gauge shotgun. Both barrels and the stock were sawed off. He carries it in a custom shoulder holster.

Or at least it is *drawn* that way. Artistic uncertainty about what exactly the writer meant by “a shotgun” abounds in comics. Which is a bother when it comes to game stats.

Frex, in the 1972 story, there are multiple instances where this weapon clearly holds more than two shells. So Shotgun’s weapon may not have been intended to be a side-by-side, but a pump-action model with a sawed-off stock and barrel (and possibly a pistol grip).

In 1997, a thug handling Shotgun’s weapon called it an “elephant gun”. That’s a curious remark about a common 12-gauge. So perhaps this is an old side-by-side sawed off 10-gauge.

In 1972, “Shotgun” Smith was a detective on the GCPD’s 28th precinct narcotics squad. He worked alone, and was reputed for both his brutality toward suspects and his efficiency. Commissioner Gordon covered for him, as he couldn’t afford having Detective Smith off the street.

Underworld heat rose about Shotgun, as he was too damaging to drugs traffickers. One “Wheel”, a secretive heroin kingpin, wanted him dead. But Commissioner Gordon persuaded Batman (Bruce Wayne) to help, even though Batman saw Detective Smith as poor police.

Smith pretended to go crooked. He stole a large stash of heroin from evidence control, and said that he wanted to sell it to Wheel. A key part was when Shotgun was uncovered by Batman in front of a mob lieutenant, but beat the Caped Crusader. This convinced this cowardly, superstitious lot that Shotgun was indeed on their side.

Shotgun thus met Wheel, and produced a sawed-off shotgun hidden among the heroin to arrest him. Howbeit, Wheel had had Maryanne kidnapped, and produced her as a hostage to stop Shotgun. But Batman had deduced Shotgun’s plan, and came in to save Maryanne.

In 1973, a criminal named Cragg impersonated “Shotgun” Smith. This was part of an attempt to blackmail gazillionaire Bruce Wayne. Cragg even had a lifelike mask of Detective Smith, and a mind-control drug.

Batman defeated Cragg and his accomplice. He then told “Shotgun” Smith what had happened, to Smith’s amusement.

Shotgun Smith’s star faded under unclear circumstances. He was apparently accused of corruption before a “Griswold Commission”. Only Gordon came to his defense. Smith had to leave the GCPD.

Some time later Smith joined the Gotham County police, eventually making Sheriff. His authority extends mainly to the unincorporated suburbs around Gotham, and some countryside areas. To his regret, it also covers Arkham Asylum.

A little bird told him

From 1993 onward Sheriff Smith has been a frequent connection for Robin (Tim Drake), who often operates in the suburbs. Several collars the Sheriff made were made possible by Robin, and trust was established between the two crimefighters.

Among their earliest collaborations, were :

In 1997, Jim Gordon called upon Shotgun’s off-the-record help. The GCPD commissioner was dealing with a bad case of rotten cops. An outsider yet knowing Gotham well, Shotgun used vacation time to help the commish. 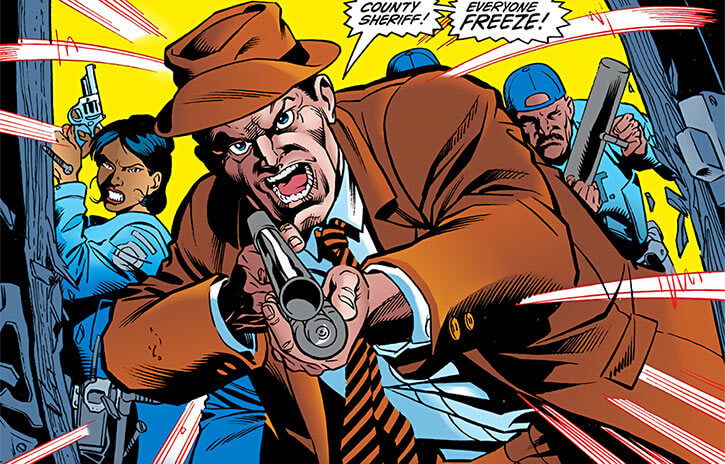 (At this point, Smith is a deputy. He was busted down at some point in 1996. During this time he remained partnered with Cissy Chambers, who still called him “Sheriff”.)

The case got even more ugly. Shotgun discovered too late that the FBI agent working with them also was on the take. Betrayed, Smith was captured and tortured. In a burst of sheer rage he killed his torturer, veteran cop Tim Dougherty.

Smith then escaped, somehow reaching Deputy Chambers’ home. The corruption seemed vast, but he knew that he could trust Cissy. After a hospital stay, “Shotgun” Smith returned from his “vacation”. He was soon reinstated as Sheriff.

Shotgun resumed working with Robin on the following cases :

In 1998, a cross-jurisdictional case had Gordon form a team with “Shotgun” Smith and Harvey Bullock. Though the two couldn’t stand each other, they did recover an invaluable diamond, prevented an international incident, and learned to respect each other.

Who was that masked boy ?

A few months later, the county police investigated the “graduates” of a crime academy set up by Cluemaster and Dragoncat. Robin and Spoiler also made considerable progress.

Smith and Chambers managed to corner Dragoncat, who mauled Shotgun. Yet the Sheriff insisted on finishing this fight mano-a-mano. Though Dragoncat was more proficient, he underestimated Smith, who sent him to the hospital.

Smith and Chambers then investigated the murder of young Philmont Delinger at his high school. Robin eventually nailed the suspects.

After the big earthquake, the prisoners at Blackgate had to be held by the county police. Smith was glad to transfer them back once Blackgate had been secured anews. But during this transfer, Nick Scratch’s enhanced operatives attacked with rocket-propelled grenades. Shotgun was badly wounded by shrapnel.

Smith recovered remarkably well. A few months later, he ran into more Scratch operatives. These genetically-altered men were dying, and they threatened the staff of a hospital so as to be cured. A proper assault couldn’t take place due to all the pressurised flammables in the operating theatre. Still, Robin took the suspects down as they died.

In 2000, Smith and Chambers found themselves mopping up after Robin and Green Arrow (Connor Hawke). The pair was defending a boy stalked by a powerful Middle-Eastern demon.

In 2002, Smith and Chambers investigated slaughtered animals at a petting zoo. They correctly determined that some sort of animalistic predators were at work. The killers were a were-leopard and a were-jaguar. These were stopped by Robin, the Blue Beetle and Bridget Clancy.

Shotgun ain’t been seen since then, Jack.

Here are a few notes to help non-American readers get a sense of some elements relevant to “Shotgun” Smith’s work.

First, American law enforcement is hopelessly atomised. There are close to 18,000 law enforcement agencies in the country. The laws and regulations they enforce can significantly vary. Something legal in a town might be illegal in the next town over.

Furthermore, they can operate at different scales –

These are not ranked by size. The New York City Police Department, a municipal police, has more than 35,000 officers. That’s more than ten times as much police as the state of New Hampshire.

This is county business, Jack

Counties are administrative divisions within a state. How much power they have depend upon the state’s constitution, but they often have their own government.

Gotham City likely is its own administrative division, separate from its suburbs and hinterland. But obviously its influence spreads around. The county-level officials also have to deal with the next administrative level, the towns and townships. These are areas that have their own government, regulations and agencies. *And* there are the state authorities above them.

If this stuff becomes important — because “Shotgun” Smith is important in your game/story — here’s simple advice. Gotham likely is in the state of New Jersey. Therefore, use Google to find links to county sheriffs in New Jersey  (outside of major cities). From there find a county sheriff website that seems appropriate and explains what they do.

It is important to note that the Gotham County Sheriff’s Department has at least one full-readiness SWAT unit, wielding what seems to be M16A2 rifles. This unit is usually led by Shotgun, though he does so in plain clothes and with a shotgun.

Shotgun’s distinctive hat can likely be classified as a porkpie hat. It’s about the same as the one worn by “Popeye” Doyle in cult movie The French Connection, released one year before Shotgun’s first appearance. The front brim is bent up for some reason.

(Edit – Smith’s 1973 appearances lays it even thicker about the The French Connection references. So “Shotgun” is almost certainly based on Gene Hackmann as Jimmy “Popeye” Doyle.)

Smith is a rough, bull-like, two-fisted customer. He’s clearly a man of the people.

He likes to be in the thick of the action, he likes results and he likes them now. He’s not much for subtle compromise and negotiation, although he’ll recognise a good plan. He’s proud of his rep as a tough guy, and will defend it unto unconsciousness.

Shotgun Smith calls most everybody “Jack”, including women (well, some women are called Jack).

He also has a problem with the GCPD, and will happily play jurisdiction wars with them. As long as he’s there, the GCPD has better stay completely out of Gotham County business. But this stance changes if he’s personally interacting with Commissioner Gordon.

Smith is vaguely kept in line by his deputy, Ms. Cissy Chambers. She’s cynical and sassy, but she’s a professional and understands this whole “rule of law among a Republic” thing much better than Shotgun does.

Cissy: “This coffee has to be two weeks old, Shotgun.”
Shotgun: “Then give me a fork. I need that caffeine.”

“I ain’t waiting on backup, Jack.”

“That psycho ! I’ll blow double-ought  up his skirts !”

“Don’t look so sick, Bullock. This is your big break. I’m going to teach you how to be a real cop.”

“Shotgun” Smith operates in a specific subgenre of American fiction with police protagonists. This is especially notable since a lot of GCPD officers operate in markedly different subgenres. For instance, Montoya and the rest in the landmark Gotham Central lived in a “gritty crime”, noir-ish subgenre instead.

Shotgun’s subgenre is something I call the “numinous police” subgenre. Some important subgenre conventions are :

Subgenres considerations are independent of “Genre” in the DCH sense. Though in a TORG game they’d be Reality Axioms, but I digress.

Connections:
Gotham County Police (High, from his Rank), Commissioner Gordon (Low). Would have a Low Connection to Robin (Tim Drake) if he could contact him.

Drawbacks:
MIA to impulsiveness. In his early appearances he had a SIA toward protecting his daughter. Whether he retains this trait is unrevealed.

In his youth, Shotgun’s DEX, STR and Martial Artist were one AP higher, though he didn’t have the Edge Advantage to his STR. He also had 30 HPs.

Using Edge for an ageing character who still can achieve spurts of vitality has also been done for Captain David Anderson. 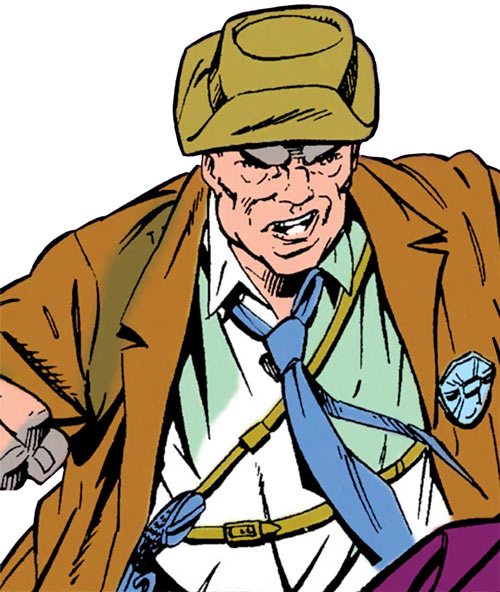 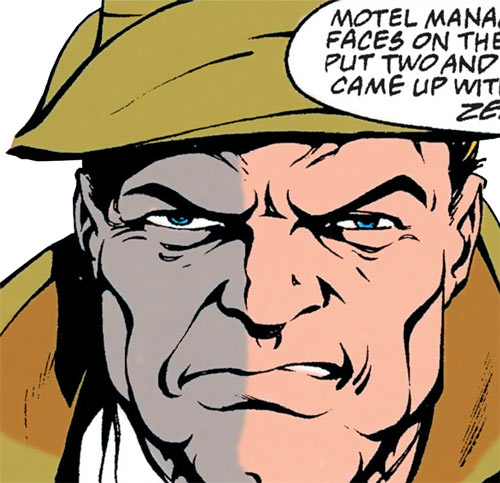 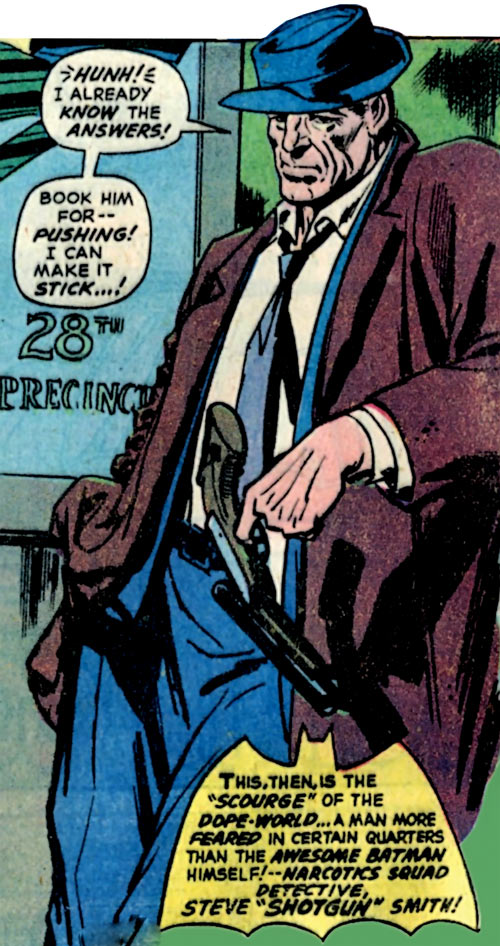