Prior to his resurrection by the Foot Clan’s mystics, Oroku Saki had no known superhuman abilities. After his resurrection, he possessed a limited healing factor , which allowed him to recover rapidly from near-fatal wounds.

Through intense training and nearly fanatical zeal, Oroku Saki achieved a level of martial arts mastery unseen before within the Foot Clan. By the time he reached his 18th year, he had become a deadly assassin and master of the art of ninjutsu.

Saki’s skill, when combined with his superb physical conditioning, made him a fearsome opponent in one on one combat.

When expecting combat, Oroku Saki would don his “Shredder” armour. The armor was made up of individual metal plates which were covered in razor sharp blades. The plates were strategically placed over his face, shoulders, forearms and shins.

Beyond this armour, Saki wielded a pair of katanas when he duelled Leonardo.

(A general history of the Teenage Mutant Ninja Turtles can be found in the team’s own entry.)

At the tender young age of 11, Oroku Saki swore vengeance on his brother’s killer, Hamato Yoshi. He joined the Foot Clan, as his brother did before him, and spent the next decade training with a feverish intensity.

By the time turned 18, he had become the Foot’s most competent assassin and was sent to New York to start an American branch of the assassin’s guild.

Saki spent the next few years building the clan’s influence in the “Big Apple” and searching his Hamato Yoshi. He eventually found Yoshi’s small apartment where he had been living in obscurity. On a quiet night, Saki murdered both Yoshi and his wife.

With no further distractions, Saki focused his full attention on Foot Clan business.

15 years later, Saki received an ultimatum from an unknown challenger while conducting Foot business. The handwritten note (which came wrapped around a hurled sai) challenged him to a duel. That was to provide him with an opportunity to regain the dishonour he had gained by murdering Yoshi in his home.

Furious, Saki immediately decided to accept the challenge for the very next night. As darkness fell the next night, Saki donned the guise of the Shredder and along with a dozen of his best warriors went to kill the upstarts who dared to challenge him. 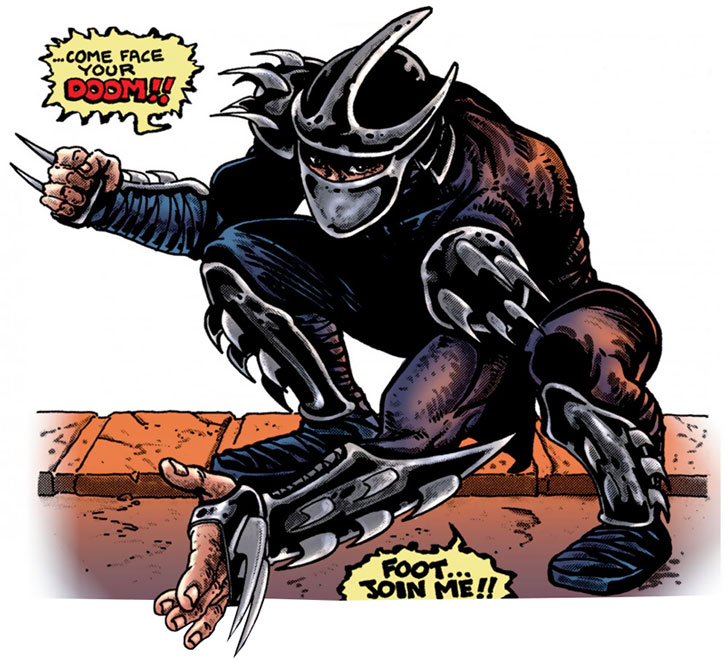 When he arrived and found four mutated turtles, Saki was unfazed. He simply unleashed his men on the mutant quartet and watched as the fight resolved itself. It was only after the last of his men fell dead to the rooftop that Saki himself got involved.

In quick succession, he turned back every attack each individual turtle sent his way. All seemed to be well in hand, until the Turtles themselves changed the rules of the duel and simultaneously attacked Saki.

The group assault proved to be too much for Saki, and he was eventually dealt a fatal blow by the lead turtle. At that moment, the turtles halted their assault and gave Saki the option to commit seppuku.

Spitting on their offer, Saki decided to take his foes with him and pulled the pin on the grenade that he secreted on his person. As fast as he reacted, one of his assailants reacted faster and knocked him (and his grenade) off the rooftop where they had fought.

Saki hit the ground at the same moment the grenade went off. The explosion shred his body beyond repair… or so his opponents thought.

In truth, Saki’s body had been retrieved by the Foot and subjected to a gross experiment. The Foot allowed his remains to be consumed by a colony of a rare breed of worm. Through some unknown process, the worms adapted their cell structures to mimic what they had consumed.

They found that opportunity shortly before Christmas. The ninja ambushed Leonardo while he was out on a training run by himself. After beating him nearly to death, the Foot took his broken body back to April O’Neil’s apartment where he had been staying. The ninja then attacked the remaining brothers.

Despite the nature of their attack, the Turtles and their allies escaped Saki’s vengeance, but in truth he was non-plussed by their survival. He knew they would be back and his vengeance would be even the sweeter for their fear.

Saki would wait over a year for the Turtles to return. When they eventually assaulted his New York stronghold, Leonardo was the only Turtle to make it far enough to face Saki. After revealing the secrets of his survival to Leonardo, Saki attacked his much smaller foe with a rage he hadn’t felt since he murdered Yoshi nearly two decades earlier.

Despite Leonardo’s best effort, Saki superior skill allowed him to eventually gain the upper hand in their battle. At the moment where he prepared to deal Leonardo a killing blow, the rooftop that they fought upon shattered and buckled as a result of a massive explosion (that was caused by the other Turtles who were fighting for their lives below).

Leonardo used the temporary reprieve from the battle to regain his footing and weapon. He then charged at Saki with what remained of his strength. Saki recognizing the attack for what it was, charged at Leonardo as well with the intention of ending the battle with a final decisive strike.

The two met in mid-flight and both of their blades drew blood. But it was Leonardo’s that had struck true; he decapitated Saki with that final blow and ended Saki’s threat forever.

Later that night, Saki’s body was cremated by the four brothers in order to put their foe to his final rest.

Oroku Saki was a relatively nondescript Japanese male. He wasn’t overly tall or large, though he had an impressively muscled and defined frame. Prior to his resurrection, his hair was cut relatively short and styled into an unruly mop that sat directly on top of his head.

After his resurrection, he had grown his hair to a much longer length (at least to his shoulders) and he wore it tied into a small bun at the top of his head.

After his resurrection, one would only have to take a single look at Saki unclothed flesh to see that he was no longer human. His flesh was pock marked, and seemingly made up of millions of tiny worms.

As the Shredder, Saki wore a nondescript blue or red cloth body suit that covered him from neck to foot. He strapped pieces of metal plates to the forearms, shins and shoulders of the costume. Each plate was covered in razor sharp blades which Saki used to deadly effect in combat.

Finally, he wore a metal helmet which protected his head and obscured his identity.

Saki was a brutal, violent, power-hungry man. His overriding personality trait seemed to be a thirst for vengeance. He was unwavering in his pursuit of this goal, and was willing to literally plan and/or wait for years to achieve it.

Despite his obsessive nature, Saki was a competent leader of the Foot Clan and understood the ins and outs of business (well… at least the professional crime side of business). He was able to build the Foot Clan’s American influence from nothing to being major players in the New York underworld in a few short years.

His men followed him with a nearly religious zeal and were willing to die for him. They went so far as to resurrect him, rather than replace him after his death.

“Who can this challenge come from ? What fool would pit his minions against the might of the Shredder ?”

“Now you must face a teacher. A Master !! Come… one at a time or all at once, I don’t care. For only I will leave here alive !”

“Your luck has ended here, fool… now you shall be the first to DIE !”

“Outsiders — our time has elapsed, my ninja… vanish. But this war is far from over… the phoenix has risen… my destiny is true !”

“I stood… grotesque… alive !! My lust for vengeance, my hatred for you — stronger than before !! Long I’ve waited… but now… the waiting is over.”

As a fighter, Shredder is capable of defeating (and in some cases manhandling) virtually every turtle one on one save Leonardo. Despite this, when modelling Shredder I set his Martial Artist/Weaponry skills one AP higher than the majority of the Turtles.

Like I said before, none of the characters in the original Mirage series fight at the same level that a Marvel or DC Martial artist tends to perform at.

Believe it or not, in the original series the Shredder had only three appearances. Despite that, his image and concept was so enduring that he became an integral part of the movies, cartoons and IDW’s newest series.

Writeup completed on the 9th of September, 2014. 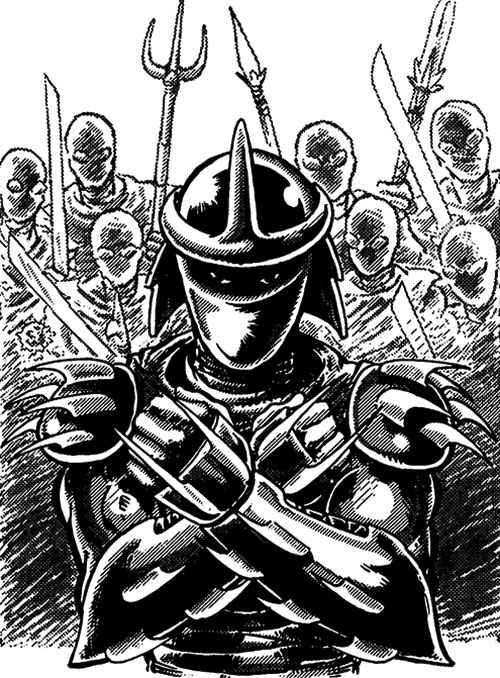 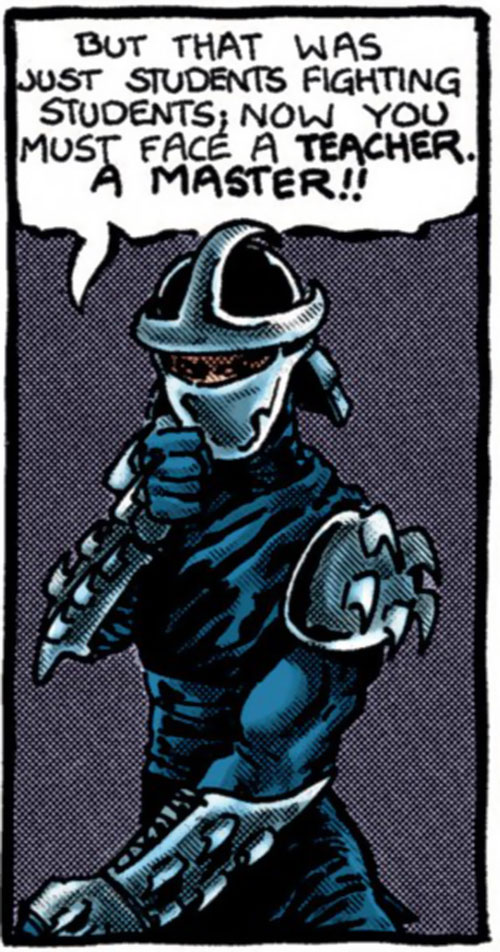 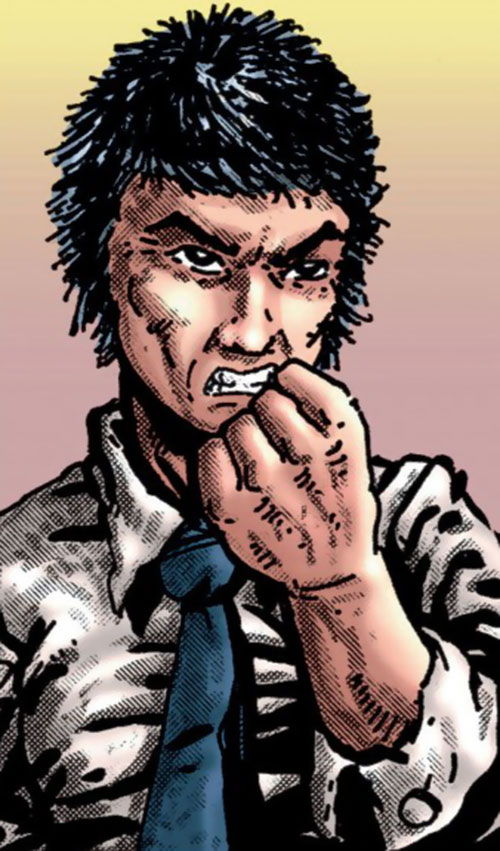