Shu-Hu is a martial arts robot. He’s as accomplished in K’un-Lun kung-fu as any champion, and superhumanly strong and durable.

He has slits in his palms, from which he can shoot big knives. He has one knife stored behind each hand.

Shu-Hu (Kunlunese for “Lightning”, sometimes translated as “Lightning Lord”) was a masked humanoid robot. He was part of a ritual trial for top champion martial artists in K’un-Lun.

The trial would begin by the Trial of the Many, pitting the fighter against half-a-dozen lesser champions. It would then progress to the Trial of the One, with Shu-Hu walking into the arena. 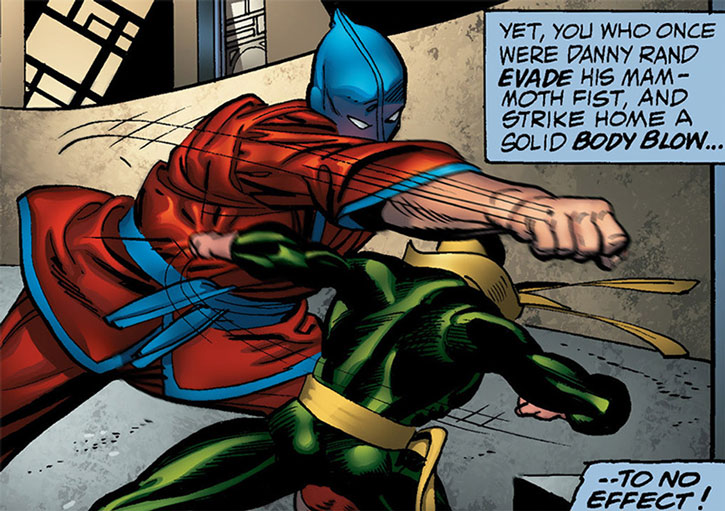 During one such trial, Iron Fist progressed to the Trial of One without undue difficulty. But then Shu-Hu quickly seized the upper hand. Iron Fist realised that the lightning lord was a robot, and Shu-Hu confirmed this by shooting knives from his hands.

Reflecting upon the death of his mother, Iron Fist found new strength. He hammered Shu-Hu, finishing him with the iron fist.

It is likely that there were other such robots. And since a part of K’un-Lun merged with Tōkyō semi-recently, it is possible that some such robots are now on Earth.

Shu-Hu’s head is definitely robotic. But when he wears his hood most observers would think that he’s a very large human male.

His “I, kung-fu robot” is arguably Subtle, but that only works with his hood on. And he generally falls well short of the level of Human life simulation you’d expect for a robot to get Subtle. OTOH, it does give him an advantage as his opponents likely expect to fight a Human person. 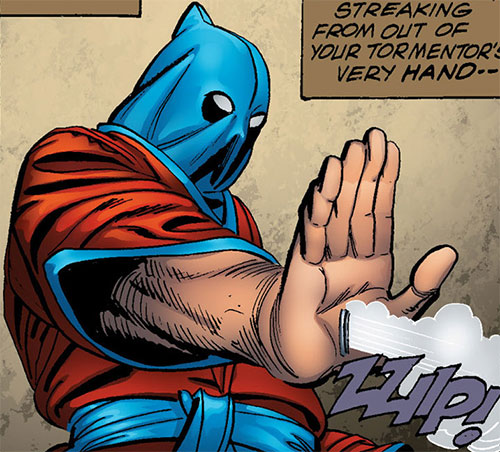