Shun Di is a veteran fighter and expert at the art of drunken Kung Fu. For being a very old man, he is much stronger and more nimble than one would expect him to be. By technique alone he can bring down even mountain-like men. Underestimating him will bring you down.

In his relaxed spare time he tends to his garden, preparing various herbs and plants. It is known that he sometimes teaches a student or two in the arts of combat.

His physique, despite being so old, is still top notch. It is possible that his weakness is that he will become too drunk during a long fight and suffer penalties. But given his durability it would have to be a very, very long fight before that happens.

The amazing power of the drunk, part 1

Drunken Kung Fu is not a system in Chinese martial arts, but a fighting form of Chinese Kung Fu. There are many various Northern and Southern Drunken Kung Fu forms. The description and movements of this generic style symbolize a person who is under the influence, and the movements as well as the practitioner look clumsy and relaxed.

Legend has it that once a practitioner was involved in combat, he would perform far better if he had a drink between his countering and attacking. During the form there is alot of “preparing for a toast” postures asking for a refill. The hand and finger positioning demonstrate as if the practitioner is holding a cup.

It is a very effective system when used as the opponents are constantly surprised by the Drunken practitioner’s movements and defence. The form often offers counter and attacking movements from all ranges, from ground work to head level strikes and above.

The amazing power of the drunk, part 2

Shun Di is a veteran of the art of drunken kung-fu. He reportedly uses the style of Zui Quan. It involves moving in a disturbing erratic fashion, feinting moves, jumps, spins, pirouettes, and so deflecting any move an enemy makes instead turning the energy right back at him/her.

In DC Heroes RPG terms, the Player is using lots of different combat maneuvers, even more so by using the Techniques subskill. Laying Back, followed by a Feint or Pressing the Attack can unbalance an opponent well.

Shun Di is often seen swaying around looking as if he would trip and fall unconscious at any moment. But this is, in fact, him being ready to adapt to any type of attack and lithely move in any direction.

When he has started moving he spins around in a beautiful, dexterous, almost dancing style in a near-impossible manner. He is very hard to connect to fully in that state, deflecting every blow and using the opponent’s energy against him/her. The style is completed with some moves that have him jumping around like a drunk after which he temporarily ends lying down as if he were unconscious.

The opponent is further perplexed by that Shun Di occasionally performs strange, possibly chi-enforcing, shouts high and low-pitched slurs, which are also sometimes used as taunts. And yes, Shun Di, does drink during combat.

Shun Di came out of retirement to fight in order to earn money for the life-saving surgery of one of his grandchildren. He is a true master of style of drunken kung-fu.

It is believed that he is based upon the character of Su Hua Chi, from the movie Drunken Master (1978).

Shun Di is a very old, small and relatively frail-looking Chinese man. Opponents will always tend to foolishly underestimate him due to his diminutive size. Little do they realize that there is much more power in this man that they could possibly imagine.

Shun Di at home is a very relaxed elderly man taking care of his grandchildren and his flowers. He is at peace of mind and enjoys his elder years. During combat, however, alcohol loosens his mind, body and tongue and he will become a dangerous opponent.

He is a master of trickery and capable of using the erratic to confuse his opponents into revealing their weaknessess, after which Shun Di will bring them down.

After combat has finished, he will tend to give some word of advice or a saying in slurred Chinese. It is possible that many years of hard drinking have affected his social grace, mental alertness and physical coordination, but there is very little evidence of that. However, he grabs the bottle too gleefully and most probably is an alcoholic.

He slurs long, intended-to-be-wise sentences in the middle of combat and during the aftermath with an accent only some Chinese persons with a good ear could understand.

“Glug, glug, glug.” (drinking before and during a fight)

Shun Di is another one of those old Japanese and Chinese masters that the heroes sometimes go to for practice and training. Given his very advanced age he might have trained characters such as the Shadow and other pulp-era heroes. 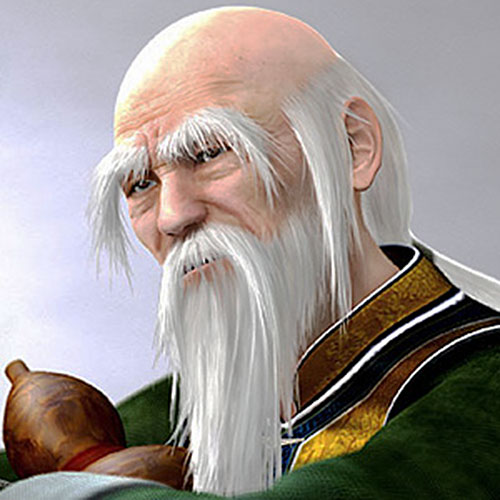