Siberforce (originally the Exiles) is an obscure Marvel Comics Russian team. It first appeared in 1992.

We see this team emerging in the one-shot Soviet Super-Soldiers. The book’s apparent goal was to reshape Marvel’s Soviet characters now that the USSR was gone.

However, this interesting initiative had little follow-up. Siberforce had but few appearances.

This is part of a series of three articles about a succession of Russian super-teams. Which goes :

(The change of name likely was a non-diegetic  decision to avoid confusion with the higher-profile, dimensionsOther realms of existence that are not our universe-hopping Exiles team. The one with Blink, Nocturne, T-Bird, etc.).

Modus Operandi:
Siberforce has a hostile relationship with authorities, and operates covertly.

Its superhuman interventions are often triggered by long-range psychic perception, and executed via DarkforceJet-black, solid energy from another universe-based teleportation.

However, Siberforce demonstrated a global range. It can even project forces on the Moon.

Bases of Operations:
Reportedly a hideout somewhere in Siberia. Hence the name, see ?

Major Funding:
Unrevealed if any. Siberforce seems to have starkly limited financial means. 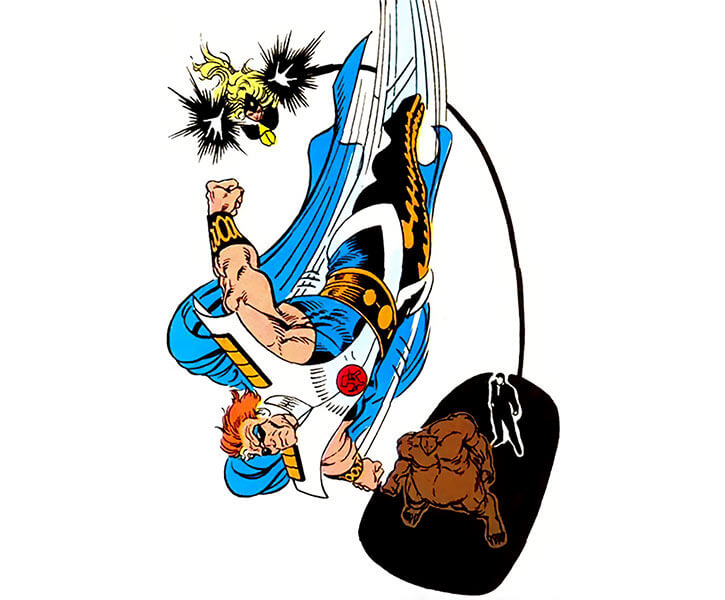 Former members:
The Exiles are the successors of the destroyed Soviet Mutant Underground. Several members of this movement are known (Iron Curtain, Concussion, Mentac) but were slain before the founding of the Exiles. 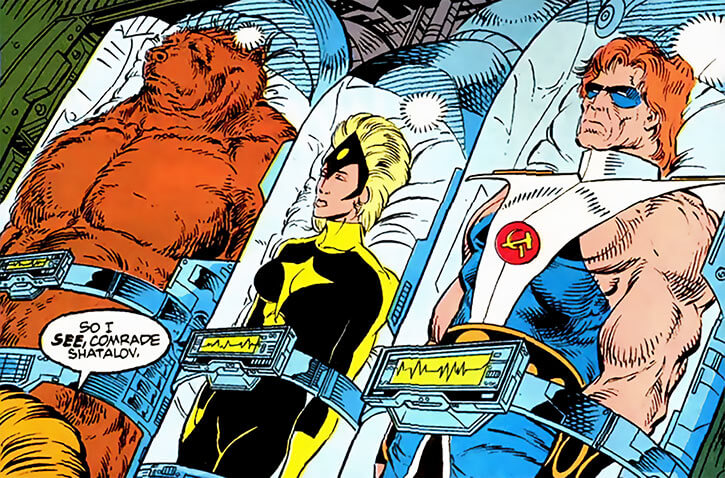 During the 1980s, the USSR’s mutant policies had reverted to harsh suppression. This may have been a result of the loss of influence of the disgraced Professor Piotr Phobos.

Many mutants were still killed on sight. But a new feature was a maximum-security, high-tech prison for those mutants taken alive.

One of the guards was equipped with a then-current but gigantic Crimson Dynamo power armourStrength-enhancing body armour, like Iron Man’s. This operative may actually have been a robot.

An underground railroad resistance emerged under the leadership of a priest, Father Alexi Garnoff a.k.a. Blind Faith.

In 1986, Garnoff’s movement was briefly reinforced by the American mutants of X-Factor. This allowed for raiding the prison camp, freeing numerous mutants. Blind Faith’s resistance was now stronger.

In 1992, Garnoff and his operatives whisked away the unconscious Darkstar, Ursa Major and Vanguard. They then woke them up and recruited them – a major victory for the mutant cause.

However, this led to Colonel General Valentin Shatalov of the GRU reactivating Firefox (Grigori Andreivitch). Historically, the aged Firefox had been the deadliest mutant hunter working for the State.

Backed by the Russian military, Firefox murdered the bulk of Garnoff’s mutant underground. However, he was defeated by Garnoff’s core operatives.

These then formed the Exiles. But only a few of the team’s engagements were chronicled.

Darkstar and Father Garnoff investigated remote Neftelensk, in Siberia. The village’s entire population had been plunged into a brain-dead stupor.

However, they were ambushed and taken down by the psionicPsionics are sci-fi style psychic powers Soul Skinner.

Omega Red (Arkady Rossovitch) and the X-Men were also taken out when they came in.

Still, everybody rallied and found a way to take out the Soul Skinner. This menace was then executed by Colonel Vazhin.

Why is this spy smiley-ing ?

Interestingly, the Exiles are, during the Neftelensk incident, working for the Colonel.

Vazhin was one of the stars of the KGB, then of the SVR. His keen mind and formidable track record allowed him to defy policy when necessary. He also had a clear interest in working with superhumans and mutants.

Back in 1979, Col. Vazhin and Dr. Bruce Banner had helped the Soviet Super-Soldiers realise in time that General Kutzov’s plan was a manipulation.

One therefore can imagine that Vazhin had opened backchannel negotiations with Garnoff. And that this is what led to the 1998 changes (below). Maybe. 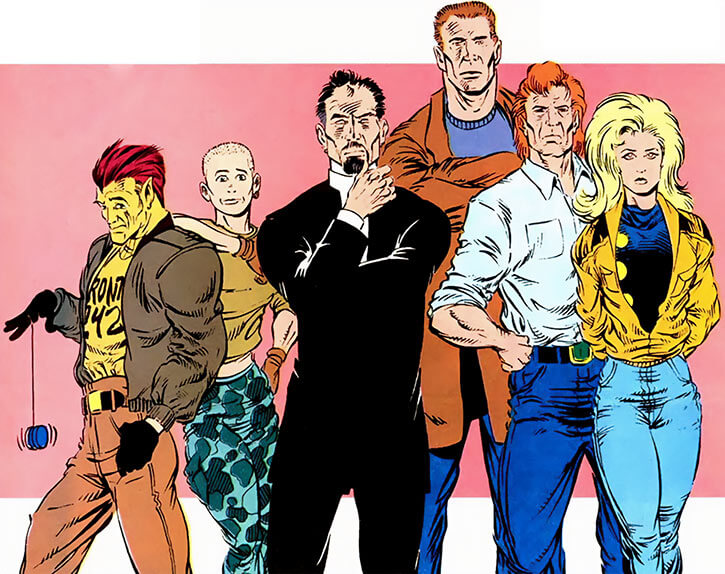 Roving band of space ne’er-do-well the Starblasters commandeered the Moon. Warned by Father Garnoff, Darkstar and Vanguard were among the Earth heroes who responded.

The Russian twins volunteered to help Quasar against the Starblasters. However, Vanguard was slain by Threkker, one of the aliens. A shocked Darkstar seemingly slew Threkker in retaliation.

Darkstar soon teleported back to Earth with her brother’s body. She consulted with her father and Starlight. However, the paranoid and insane Presence strong-armed his bereaved daughter into attacking Quasar to avenge Vanguard.

Their brutal assaults forced Quasar to fake his death and leave Earth.

In 1996, the Presence intuited a way to restore his son to life. Mr. Krylov was banished into another reality for a while, but Darkstar was reunited with her fully resurrected brother.

In 1997, the ex-SSS were then again tricked by a Russian intelligence officer, the Snow Wolf (Colonel Tskarov). He captured and weaponised Darkstar.

The Snow Wolf then retained Vanguard and Ursa Major under the pretence of looking for her to set up a rescue operation.

While manipulated by Tskarov, Nicolai and Mikhail clashed with the Black Widow (Natasha Romanova) and Daredevil (Matt Murdock).

But they eventually rejected the Wolf’s methods, then discovered that they had been tricked.

A time to guard

It was thus decided to create the Winter Guard. This new team had members from both Siberforce and government team the People’s Protectorate.

Two Siberforce members did not join :