Sidewinder is capable of transforming her legs into snake-like coils, which she can use to crush her opponents.

It is *possible* that she some sort of regenerative power allowing her to survive her apparent death.

Sidewinder was first heard of as part of the Task Force X team reformed under the Cabal. The Cabal was a shadowy government organisation trying to control super-heroes.

The unit’s first known mission was eliminating Cabal agent Blacksnake. Arrested after his involvement in actions against the Atom (Ray Palmer), Blacksnake had offered to make a deal, revealing what he knew about the Cabal. Task Force X infiltrated the police station where he was being held. They killed Blacksnake and a number of officers, then blew the place up to cover their departure.

They were next sent to Diabloverde, where the Cabal’s new Suicide Squad had been set up. This Squad’s job was to help its oppressive dictator maintain his rule. Amanda Waller had heard about their activities, and took her Suicide Squad there to deal with them. Task Force X’s mission was to eliminate Waller and the members of her Squad.

Sidewinder attacked Bronze Tiger. She seemed to be winning when Deadshot appeared and shot her. Subdued, they questioned her then left her for her teammates to find. Sidewinder was too badly wounded to continue the job, and too well-informed to leave alive. Pathfinder ordered Kaliber to kill her. Kaliber opened fire, but it is *possible* that he deliberately missed.

Despite her apparent demise, she next appeared among a group of metahuman mercenaries hired to kill Deadshot. She was working along with the other members of Task Force X. Sidewinder had Deadshot in her grip, until he angled her to intercept Schrek, who accidentally bit her in the throat. She was on the floor of the warehouse when it exploded.

Whether she survived again is unclear, but since she wasn’t actually confirmed dead… And even if she had been, we can assume she’s still around.

Sidewinder seems fairly animalistic. Furthermore, she was has apparently been conditioned to follow orders.

From the quote it seems her feral nature (when in snakelike form, at least) extends to her wanting to eat her victims, which could well make her sluggish and sleepy afterwards.

Sidewinder (having just killed a police officer): “Hungry, Pathfinder.”
Pathfinder: “Later. You know how you get when you’ve eaten.” 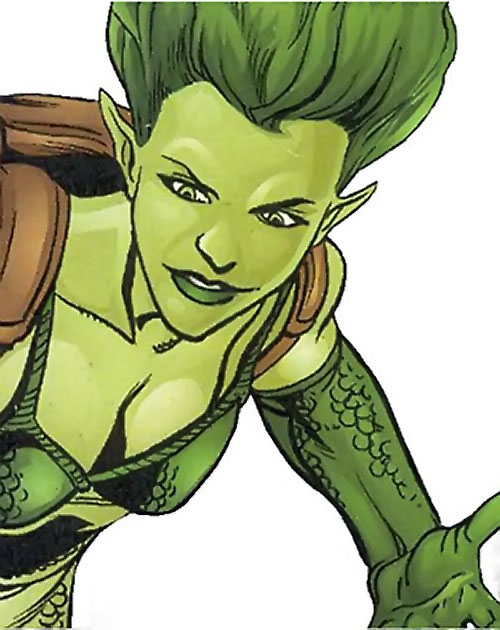