Being a ghostcomp  (i.e., a human personality described by computer code), he’s nearly immune to telepathy.

John Kelly, a former police officer turned military man, should have been the human template for the powerful Deathlok III cyborg. However, something went wrong and his brain was electrocuted by the Deathlok systems.

However his lungs, parts of his digestive systems, etc. stayed alive. Charmingly, they remained in place in this prototype Deathlok body even after Michael Collins’ brain was successfully transplanted within.

Yet, Kelly wasn’t quite dead.

First, the remains of his brains were reanimated and mutated into the revolting creature called Biohazard.

Later, Collins found that the Kelly persona had been downloaded before the accident. Collins downloaded it into the Siege cyborg body so Kelly’s digitised consciousness would again have a physical form/

The bitter, violent Kelly has since operated as an ally of Deathlok and superpowered mercenary.

Siege is an hardcore military man, harsh and crude. He doesn’t understand jack about the way the ultra-sophisticated systems he uses work, and doesn’t give a shit.

However, behind this leatherneck my-country-right-or-wrong attitude lies a tortured man. He cannot tell whether he’s truly John Kelly trapped inside a machine or a machine that dreams it is John Kelly.

Despite his shortcomings, Kelly is a reliable and honourable man. But he greatly enjoys violence, is self-righteous and aggressive, and is obsessed with winning, winning and winning – in that order.

“They wouldn’t let me win in ’Nam… or on the streets… an’ I’m takin’ all my frustrations out here an’ now ! Don’t think for a minute ya can win this war while I’m around !”. 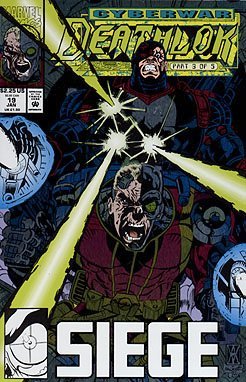 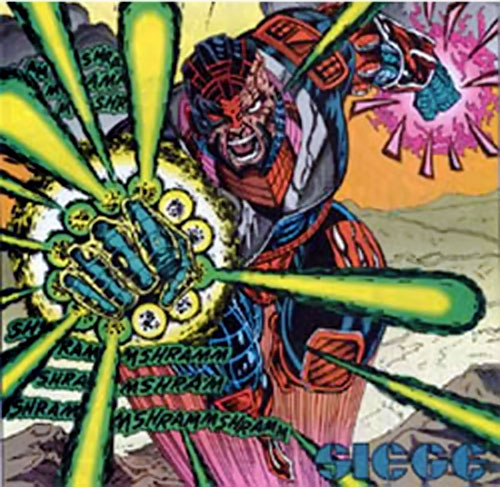