This is the second part of our Marvel Comics’ Sif in the 1960s character profile. It’s best to read the first half first, lest thee bringeth the All-Father’s mightily bearded disfavour.

Sif used the Destroyer to defeat the Wrecker, but it was a trap. Karnilla and Loki knew that Thor would attack the Destroyer upon reviving, and that Sif would soon be unable to control the Destroyer’s aggressive programming.

And it would have worked, too – if not for these meddling trolls. Ulik and a small army coincidentally invaded Karnilla’s castle. This forced her to free Balder and Sif in return for helping defend the fortress

They held long enough for Thor to come to the rescue. But during the thunder god’s victorious fight with Ulik, Loki stole Mjolnir. Sif and Thor pursued, but Sif was nearly killed when she body-blocked a powerful spell intended to fell Thor.

When the Mangog arose, Thor hastened Sif’s recovery. He then had her stand watch over Odin, who was plunged into his Odinsleep. Thor and Sif were the last line of defense when the Mangog attempted to draw the Odinsword and end the universe. But Odin awoke in the nick of time and dispersed the Mangog.

While Thor was busy fighting Galactus to save Ego, Sif investigated a coming attack on New York City by the Olympian god Hades. She was captured by his army of savage mutates from the atomic future, but Thor came back in time to rescue her.

They fought their way out and, together with Balder and the National Guard, repelled Hades’ invasion in the streets of New York City.

After starring in the big military victory parade, the three Asgardians investigated further. They discovered Adam Warlock, who had returned to Earth. Warlock abducted Sif as his mate. Realising that the golden humanoid was just an ignorant child, Sif advocated for a nonviolent solution.

However, Thor descended into warrior madness to free his love, forcing Warlock to retreat into a cocoon. Sif and Balder were horrified, since going berserk was forbidden by Odin. They now had to take Thor back to Asgard for judgement. As penance, Thor was condemned to leave alone, to look for Galactus anew.

During the next Odinsleep, Loki invaded with an army of giants. Sif came to fetch Thor from Midgard. Thor again detailed Sif to guard Odin.

When Loki teleported in the room she was the only one with the common sense to refuse to obey him as a prince of the realm. The other guards, tradition-bound, arrested her as Loki took the ring of rulership from the sleeping All-Father.

Sif was held prisoner to keep Thor in line, and the Odinson and the Warriors Three soon joined her the gaols. Loki ordered Sif to become his queen, and when she refused had a female troll mercenary attack her. But Sif won the duel and Thor, the Warriors Three and Balder came to defy Loki.

Loki had hidden the sleeping Odin in the Sea of Eternal Night so he would never wake. But this broke magical protection wards. Thus, the immensely powerful Surtur was now free to attack Asgard.

Loki then switched his and Thor’s appearance. Sensing that their friend was in danger, Sif and Balder came to Midgard. “Loki” narrowly managed to convince them that he was really Thor. Odin did not listen, though, and banished “Loki” to Mephisto’s Realm.

Sif rounded up the Warriors Three for a successful rescue mission, and Thor reversed the change.

Whom the gods would destroy

During the Infinity crisis , Sif helped defend Asgard against a joint giant and troll invasion. She then ventured to Nornheim with Balder to enlist Karnilla’s help against the convoluted cosmic catastrophe.

After “Infinity” was revealed to be an aspect of Odin serving Hela, Thor rounded up those most loyal to Asgard — Sif, her brother, Balder and the Warrior Three. They took part in a spell he cast with Karnilla and the Grand Vizier of Asgard. Their determination allowed Odin to refocus, then overcome and absorb Infinity.

However, Odin knew that in defeat Hela would strike back, presumably at the Odinson. As Sif angsted, Odin ordered Thor to hide on Earth. But Hela (hela, hela, heh, heh) forced the Odinson to reveal himself by threatening nearby firefighters.

In the end, even Odin had to renounce opposing Hela, and let her take Thor. However Sif pleaded with Hela, asking that she kill her instead of Thor. Moved by Sif’s love, the lonely Hela resurrected Thor and left.

During this era, Sif’s wardrobe is in silver and magenta, though the magenta will later shift to red. Which may be an artefact of inks ageing, I’m not sure.

According to Thor, she is “fair beyond measure”, “so beauteous as to stagger even a god”, all these things.

She’s generally clad in a full body suit that might be armour. But by 1970/1971 her outfits suddenly start showing much more skin. It’s closer to peplum film  haremwear.

In her late 1960s appearances, Sif is primarily characterised by :

She also spends a fair bit of time telling off overprotective male friends. Odin usually supports her in the latter. The All-Father may not understand much about women, but he knows about worthiness. 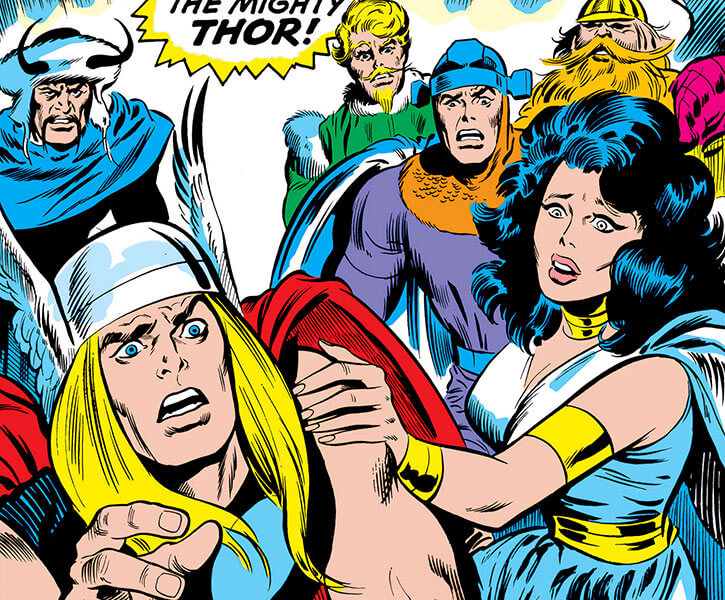 Despite being some sort of noble (the equivalent of a ji-samurai  ?), Sif is the least invested in Asgard’s rigid medieval order. She sees the frequently absurd results of the weighty hierarchies, such as when refusing to question the right of blood puts Loki on the throne. She never argues against the system, but protests when the consequences of blindly applying it are destructive.

Sif addresses Thor as “my lord” (since he’s the son of Odin) or occasionally “my prince”. Both she and Thor are prone to fiery romantic declarations of death-defying, everlasting love. She will oft lament the most dire perils Thor braveth, and her fears of his death.

Generally she’s firmly a Non-Player Character . The story is never about her or her point of view.

In her flashback appearances

As a youth, Sif’s passion was for fighting and adventure. However, she felt held back by Asgardian misogyny. Therefore, she craved recognition that she was the equal of any male warrior of her age. Still, she was worn down by the resentment most boys in her warrior school class showed toward her.

She had some adolescent grumpiness to her. On the other hand, she showed excellent maturity in not letting the sexual tension between her and Balder and Thor mess with their friendship.

Generally, Sif’s adolescence was lonely. She felt like an ostracised ugly duckling with her raven hair and her choice to be a female warrior – and perhaps because she was a country girl. She likewise found it difficult to deal with her feelings for Thor, who was even more clueless about it than she was.

As a teenager, Sif was also resentful of blonde girls such as Amora. Since they are conventionally beautiful by Asgardian standards.

“Nay, mighty Thor ! An immortal does not flee ! Whilst the battle doth rage, the blade of Sif shall strike… so long as life endures !”

“What ?!! You think to conquer the goddess Sif thus easily ! Attack, then… one or all… and live to regret it… eternally !”

“First, I am in need of weapon in hand… and even so clumsy a sword as thine will prove most potent when wielded by a high-born Asgardian !” (disarms a troll with her bare hands) “Away with three, troll ! Thou are no longer of use to me ! In yon bottomless pit shalt thou find final rest !” (kicks troll away) “Now back, minions of the dark and fetid depths ! Back to the stygian shadow-world from whence thou comest !” (KRLAK !)

“Let not thy heart be heavy, noble one ! Though Sif is possessed of greater skill, thou art still supreme in naked power !”

“My sword strikes for Asgard ! It shall never be stilled !”

“Thou didst level a dozen, my lord… with but one blow ! But their numbers seem truly endless !”

“Where‘er thou goest, let thy Lady Sif be at thy side ! For life is death — if Sif must live without thee !”

As noted in the Powers & Abilities section, the teenage Sif depicted in flashbacks seems more competent than the older Sif in 1960s stories.

For the flashback version, add :

We haven’t redone full research about boilerplate Asgardian capabilities, such as their Systemic Antidote APs.

The Attack Vulnerability isn’t yet demonstrated during this era, so I originally left it out. But it just looked weird, so I eventually added it. Besides it can only be – 1CS, since -2 wouldn’t work when hit with high-EV attacks.

* Without Defensive Roll.
** Without Swordsmaiden.

Her Sense (Communication Link) is so limited that I ended up considering it free. As a GM I’d consider that it’s useful to move the plot along so a break is OK (since that’s how it’s always used in the comics).

Swordsmaiden is a “little rubber duck” Power. She’s less adept without a sword in hand. Specifically she is more passive, less capable, and markedly easier to take down and capture when she doesn’t have a sword. Part of the effect is that people facing her have to be more careful and measured in their attacks if she has a sword in hand, rather than just walk up to her and conk her out.

Ethereal Travel looks slightly odd… and it should. From what we see in the comics this is an impressive ability. Yet she seldom uses it, nobody in the book cares about it, and at this point Sif’s mostly here to look pretty anyway. This is represented by the pile of Tiring Limitations, forcing her to burn too many Hero Points (which she isn’t earning since the story seldom lets her do anything cool). Thus, this neat ability remains languishing and unused.

Likewise she’s low on Combat Advantages since she seldom if ever gets to do something technical or impressive. As usual we stats what’s on the page, not what we think such a character should have.

As noted in the Powers & Abilities section, the teenage Sif depicted in flashbacks seems more competent than the older Sif in 1960s stories.

For the flashback version:

Source of Character: Marvel comics from 1967 to 1971, plus the later flashbacks about Sif’s youth. Our arbitrary breakpoint is Thor #191 (cover-dated August 1971) since it’s the next-to-last Stan Lee-penned issue. 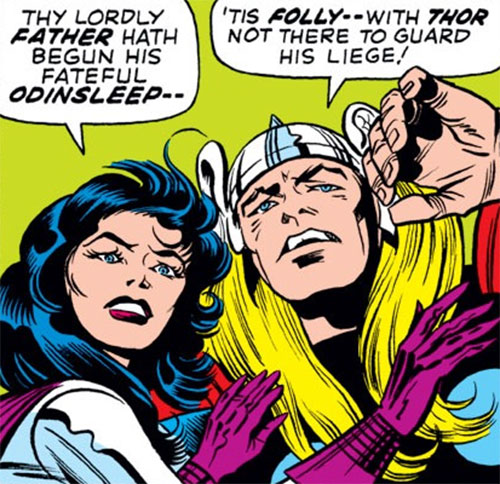 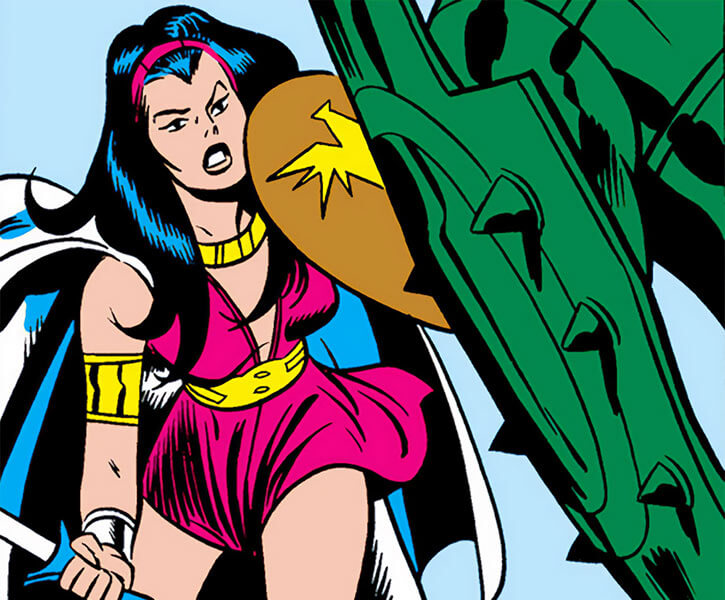 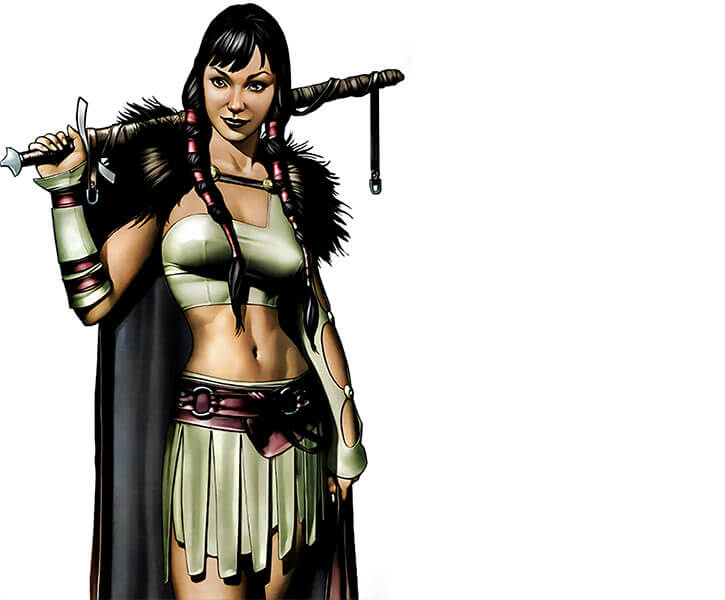 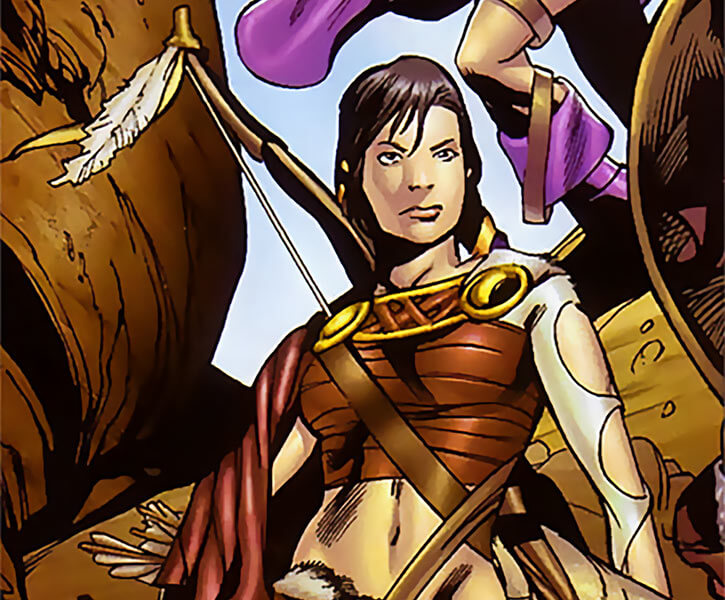 1980s look, stored here to be used in later writeups :