Diablo was released in 1997. That launched the action RPG/hack-n-slash genre of video games.

23+ years later it looks… basic. But back then it was amazing.

It was a full-on dungeon crawl ! In real-time 3D ! On a computer ! With random drops ! Oh golly gosh !

Revenge of the context

Many months back I bought the refurbished Diablo + Lord of Destruction Windows version. I strongly suspected I’d play but once for a short while but heh, it was on sale for just a few bucks. And I spent a looooot of time playing Diablo 20+ years ago.

It was actually worse than that, since I found the game illegible. Older eyes greatly lose their ability to discern contrast. So it all looked like brown blobs and stains.

(I ended up playing Din’s Curse instead.)

Return of the revenge of the context

But I played enough to remember the sheer video game logicStuff that only makes sense within a video game of playing the Rogue. The central tactic is to repeatedly run away then stand to shoot the monstahs coming at you.

Makes sense on the screen. But how in Sam Hill is that supposed to work in-universe ? Especially in heels ? It would work against shambling zombies, but in most other cases it can’t be literal.

(That’s the opposite of the approach I took for the Diablo II Amazon. The Amazon is modelled as if the character concept were seen in a comic book or a movie. But in this here article, the schwerpunkt is what’s on-screen. Yes, I can say schwerpunkt if I want to. That’s legal where I live. Gesamtkunstwerk as well).

I had already pondered about this for a backstrafing-heavy game, Ziggurat. There my “solution” was that the character had mechanical spider legs and was actually performing the strafing and backstrafing seen in-game. 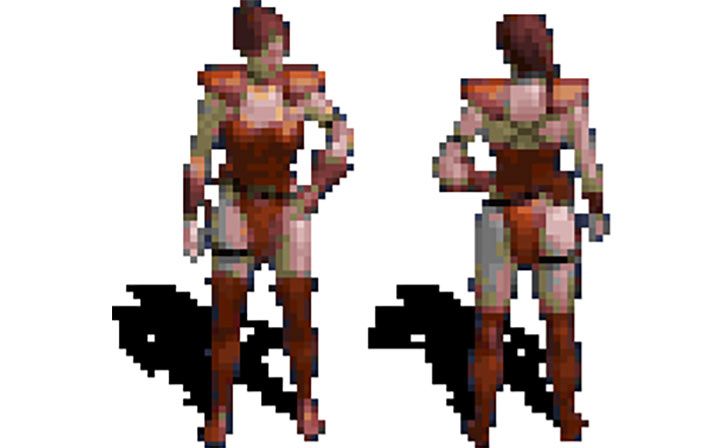 If you don’t know anything about Diablo, then you should first read the profile for Guardian of Death. It recaps everything.

This character isn’t *the* Rogue who ventured under Tristram. Just *a* Rogue.

It’s not an “original sample” entry. Since I don’t have time to add texture. It just has a primer about the Sisterhood of the Sightless Eye, the gameplay “solution”, and DCH stats.

Also, à propos of nothing, TTRPGs are a nice way of enjoying Blizzard’s universes without giving them a dime.

Rhian is a superb Sister of the Sightless Eye archer and skirmisher. She’s fast, dead accurate, and exceptionally mobile.

Since she usually works solo, she’s more of a sniper. On a battlefield, Sisters presumably work as highly mobile irregular archers, harassing much larger units to lower morale and set them up for larger attacks.

The Sisters of the Sightless Eye are also known for their stealth skills, and a sort of magical vision. The “sightless eye” is a technique or enchantment allowing them to spot traps and the like, simply by looking in their general direction. 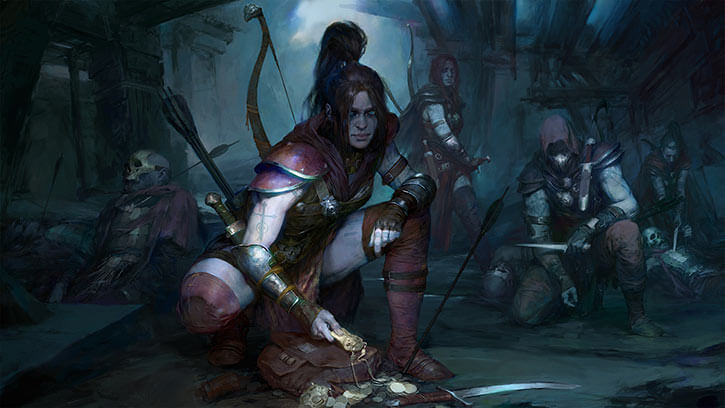 Diablo IV art that seems to depict a Sister of the Sightless Eye.

Now you see her…

Ms. Edris has mastered a rare technique, which seems to have ties with the Sightless Eye. It’s magical yet not a spell – like the Assassin techniques.

It is done by closing her eyes and softly humming a specific note. Doing this shuts down the ranged senses of everything within about a 20 metres (65 ft) radius.

The likes of taste and touch remain usable. But even non-standard ranged senses (such as echolocation, or magically sensing life force as undeads do) will be blocked.

It also hinders proprioperception  . In practice, this is much like vertigo, even in creatures that cannot normally experience such a sensation.

Rhian’s senses are also blocked – though the vertigo effect is far less severe. So at first glance, this technique isn’t terribly useful.

… now you don’t see anything

When in a combat zone, Rhian will constantly memorise her environment. She’ll engage opponents at range with a short bow. When they start closing in :

Creatures that can survive (or escape) numerous arrows hits will eventually be able to catch up. At which point things become well hairier. Rhian will leap past her foe, roll and redo a sensory block, but this becomes increasingly harder.

Here’s a brief bit of footage from the game, for those who’ve never played it.

But using a larger resolution (it looks okay on a full screen). Plus aniso and anti-aliasing so you can see something if you’re like me.

Originally, the Sisters of the Sightless Eye were part of the Askari Islander culture. The Askari are often called Amazons, as their martially accomplished society is dominated by women.

The Amazons once had a mighty artefact called the Sightless Eye. It was used by a Nephalem to communicate with Angels, back when there were but few mortals.

As the legend has it, the twin Human daughters of this Nephalem were the first Amazons. Though their father had hidden the Eye, they stole it and used it to found their tribe.

The Eye could be used to foretell the future – to an extent. Since the Amazons built a sophisticated and successful culture, they presumably used these scryings to avoid making major political mistakes.

But some Amazons eventually went rogue, and stole the Eye. The motivation of these Rogues remains unrevealed.

The Rogues fled the Amazon island, and established themselves on the mainland. They founded the small Sisterhood of the Sightless Eye at the Eastgate Monastery.

Eastgate had once been a fortress of the Khejistani Empire. It was a forward base used by a legendary general to conquer the West in the name of the Zakarum faith. This crusade is how the nation of Westmarch was created.

The total amount of (wo)manpower for the Rogues is about, in modern terms, one platoon. I’d imagine that most of the time they work in fire teams of maybe four archers, or as scouting pairs.

Shortly before Diablo II, the Monastery is taken over by the demon Andariel, one of the Lesser Evils.

Whether any Rogue survived, and whether Andariel found the Sightless Eye, is unrevealed. But the Sisterhood was destroyed that day.

The Sisterhood still wears outfits similar to the Amazons’. Inevitably, that means a sort of leather leotard, a decorative loincloth and knee-high boots. For reasons.

(Yes, the illustration is the Diablo sprite. I don’t know who extracted it. I considered neural-filtering it, but kept it all pixelly.)

Sisterhood (from her Credentials).

I guess she feels cold.

Formally, there should be APs of Glue Combined With Sensory Block, plus some modifiers.

I decided to simplify by having Sensory Block reduce movement speed. Which is sloppy modelisation. On the other hand, it does feel that it should be part of Sensory Block’s default workings, unless one or more navigational senses remain unaffected…

As with the Amazon, it’s the character at low levels. Later on she’d get magical weapons, learn spells, etc.. But since it’s not supposed to be *the* rogue…

Writeup completed on the 8th of December, 2020.