The Sign is some sort of mutant magician. He uses his mystic tattoos and, more rarely, material spell components from his belt pouches to power his abilities.

He relies most often on lightning bolts from his hands. He he also formed Green Lantern-like structures such as green giant boxing gloves around his own hands.

The Sign is too busy looking menacing and mysterious to talk much. He does utter some war cries when conjuring his spells, though.

He’s very much like the three Thunders in Big Troubles in little China. I wouldn’t be surprised if he were the son of one. 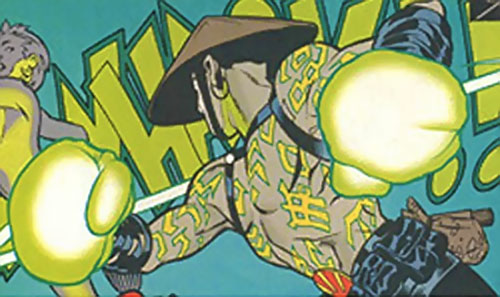