For all the context, you should check our team profile for the Starjammers.

These notes are so old I have no idea why they’re here. I suspect it was simply a stats conversion from TSR’s Advanced Marvel Super-Heroes RPG.

Sikorsky is a flying insectoid with strong empathic abilities. These include the ability to psychically explore the insides of other living beings, modelled here as X-Ray vision.

He is a superb medical specialist, able to patch pretty much any living being.

Sikorsky has access to a very high level of Shi’ar medical technology. He once grew an entire new body for Xavier in prime condition, and transferred Xavier’s consciousness from his doomed body to his new one.

The Starjammers were formed by Cyclops’ father, Corsair. Corsair was an alien abductee long before it became fashionable, along with his wife. He was taken by the Shi’ar, then ruled by the mad emperor D’Ken. Mrs. Summers was murdered by D’Ken.

Corsair managed to escape. He assembled a small band à la “Merry Companions from Sherwood” to engage in terrorist actions against the Shi’ar – and general piracy. Thesee were the Starjammers.

Those dissidents met success after success. Along with a loose association with the X-Men and having twice helped Lilandra to ascend to the Shi’ar throne, this made them an important factor in Shi’ar politics.

The quietly buzzing Sikorsky mostly stays in the background. But he has nonetheless saved quite a few Starjammers and X-Men lives, sometimes from desperate conditions.

Sikorsky is just the medic in the background. He never leaves the ship (unless a patient absolutely must be attended to outside), seems to be a total noncombatant and appears to exist only for medical practice.

His calm, measured, somewhat timid speech is characterised by a mechanical droning hum.

Sikorsky is an insectoid alien. He looks vaguely like a Earth helicopter of the 1960’s, hence the “Sikorsky” nickname Corsair gave him.

His real name is unpronounceable by Humans.

The Starjammers bring a dash of space opera in the normally gritty and more down-to-Earth world of the X-Men. Keeping the Titans-to-X-Men analogy, they would be a band of freebooters tangling with the Spider Guild around Vega, who have allied with the Titans during several space adventures.

You may even go as far as making Corsair’s Dick Grayson supposedly dead father (the man who supposedly killed the Flying Grayson was a Shi’ar scout attempting to silence them as they had Seen Too Much).

Or, since Imperial Guard = Legion of Super Heroes, they might be freebooters operating near the Khund Empire and having occasionally allied with the Legion. In that case, Corsair would obviously be a Rimborian, and would be closely related to Jo Nah (a future version of him spawned by Glorith’s manipulations ?).

Advantages:
Scholar (Xenobiology, cybernetics – the later allows him to use Medicine to repair cybernetics as well as tissues).

Equipment:
A full medical bay aboard the HMSS Starjammer. 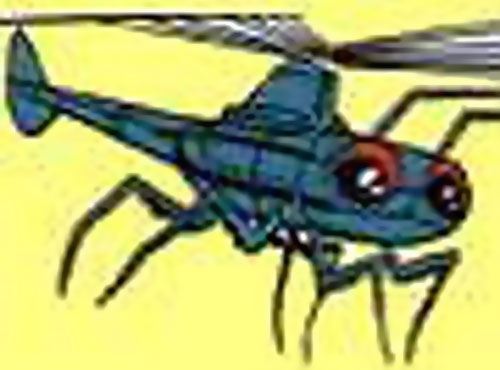