The Silencer is apparently made of a dripping, inky material. His normal state is to be immaterial. He can selectively solidify in order to hit opponents, whilst remaining immaterial to their attacks. This is presumably Darkforce . Since the Silencer can also teleport via another, dark dimension. He has further commonalities with other Darkforce users.

The Silencer is a superhuman, terrifying mob enforcer from the old country.

In 1998, he came to America. That was to help a local family tie up loose ends from an unsolved 1973 double murder. The case eventually resulted in repeated clashes with Elektra and Spider-Man (Peter Parker). In the fray MacKinley “Mac” Stewart, Elektra’s lover, was killed by Maggia goons.

The Silencer could only be defeated through deus ex machina . While fighting Spider-Man and Elektra in an astronomy museum, he was absorbed into a mysterious, magnetized meteorite. The stone was marked “Alaska, 1909” and etched with mathematical inscriptions along its core. This meteorite was taken to the Ravencroft Institute and is kept under triple lock.

When the Silencer teleports in somewhere, there is a severe drop in air pressure. The place he warps in seems to somehow gets smaller. There’s a “black hole” effect (and sometimes weird red laser effects) then damp, reaching darkness gets everywhere and the Silencer emerges.

The Silencer has a strong old-school mafioso honour code thing going. He seems to greatly respect his opponents who have unusual fighting spirit. He behaved almost as a priest giving absolution to an old boxer he chose to kill.

He also fought against Elektra and Spider-Man in a choreographed, almost ritualised way. For instance methodically disarming Elektra and crushing her sai before actually clobbering her.

While he’s clearly more efficient with his bare hands, the Silencer often uses weapons. But only old, silent Maggia weapons.

The Silencer might have made a trip to Gotham once to teach the masks some respect for the old ways.

Bonuses and Limitations:
Thief (stealth) is Contingent Upon Fluid form.

Drawbacks:
Strange appearance, Misc.: The Silencer does not appear to speak English.

Equipment:
Common equipment for the Silencer include : 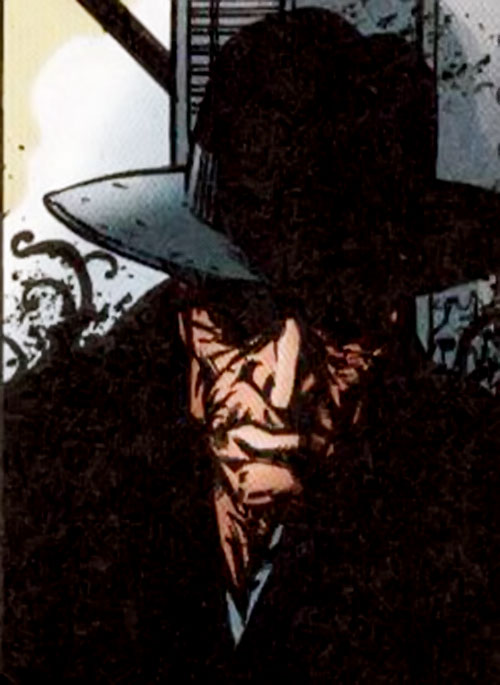 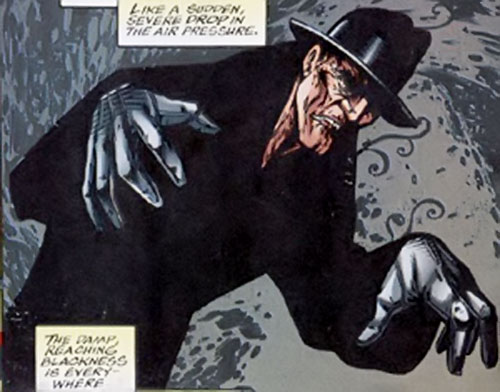