Silent Majority was a member of the Force of July – see this team profile for most of the context.

The Force was a group of US hardliners who repeatedly fought Batman and the Outsiders during the 1980s.

“Silent majority” is a reference to a political talking point most famously used by President Nixon  .

Silent Majority can produce identical duplicates of himself, which can themselves duplicate. There will usually be 6 to 8 duplicates total in play.

However, if any of them are hit by energy blasts such as lightning bolts, they can generate additional duplicates. Even if the one who was originally struck by the bolt has been knocked out by the strike.

Silent Majority makes good use of team tactics with his duplicates. For example, he once had a few duplicates keep Black Lightning occupied in hand-to-hand combat while the others quickly retrieved an emergency fire hose from the next room. 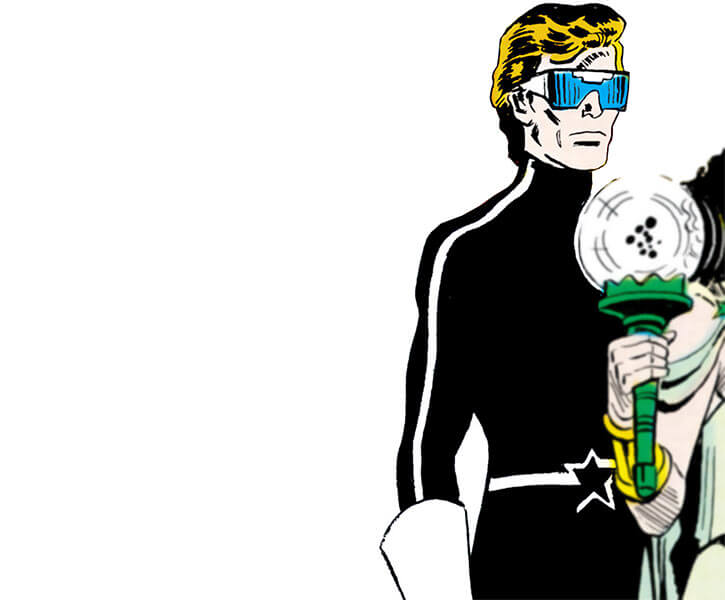 Silent Majority lacks the special movement powers possessed by the rest of the team. But he compensates to a limited extent by arranging his duplicates in formations. This technique is aided by his ability to form his duplicates at any point on his body.

For example, by quickly forming a line of duplicates and then making smaller successive lines atop them, Silent Majority could reach higher places by creating a human pyramid.

His most spectacular use of this skill was crossing the gap between the Force’s grounded aircraft and a nearby sea vessel. He extended his arms, forming a likewise outstretched duplicate from his hands and grasping said duplicate’s ankles, and having that duplicate do the same several times in rapid succession. This human bridge quickly reached the ship.

He then formed duplicates from each of the duplicates forming the bridge. And had then run across the bridge and boarding the ship even more quickly than he could have simply by forming a single duplicate at a time at the bridge’s end. 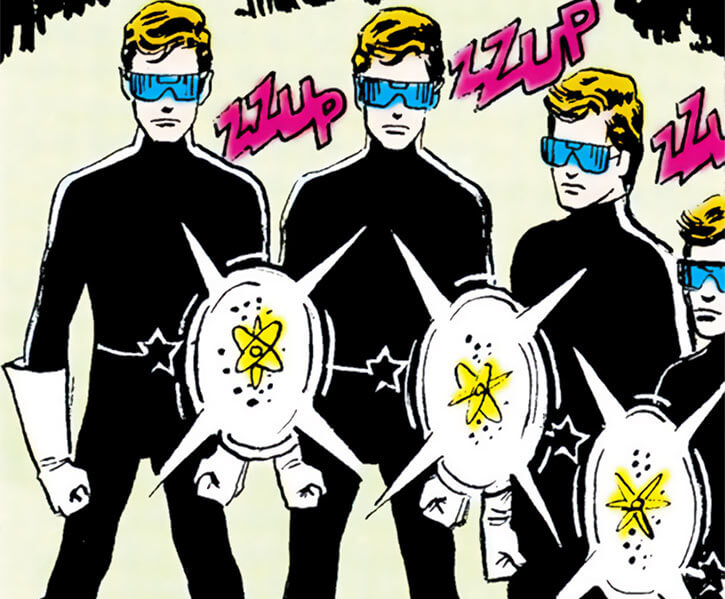 For the history of the Force of July, see our main article.

The following sections start where the Force of July History section ended.

Copy of a Copy

Though Silent Majority was killed fighting Kobra during the Janus Directive, a replacement was created for Freedom’s Ring.&emSP.These debuted in Blüdhaven in the wake of Chemo’s attack there during Infinite Crisis.

Several of this Silent Majority’s duplicates were killed by a variety of energy attacks during the early stages of the Battle of Blüdhaven without creating any additional duplicates. This suggests that the new Silent Majority lacked, in DC Heroes RPG terms, the original’s Energy Absorption and Power Reserve.

The new Silent Majority did not demonstrate the original’s talent for unique acrobatics either. Though this may have been for lack of opportunity.

Despite all of the Silent Majority duplicates present being killed in one of the opening skirmishes of the Battle of Blüdhaven, Silent Majority was still a part of the government forces there in later battles.

It is unrevealed whether this means the first replacement Silent Majority had surviving duplicates elsewhere in the city. Or if there was another replacement quickly available – as with Lady Liberty.

In this case Split would have the Always On Limitation. With deceased Splits being replaced off-screen by whatever means suits the GM’s fancy.

Like the man himself, Silent Majority’s costume was fairly simple. It’s a black bodysuit with white over-the-calf boots, flared gloves, and thin trim lines running up the outside of his arms and legs to his collar and his belt, respectively.

Said belt was a thin white line with a black belt buckle shaped like a five-pointed star and trimmed in white.

He always wears dark blue sunglasses, even at night .

When Silent Majority generated his duplicates, they would appear to either side of him with a flash of yellow light connecting them. The light flash had an atomic symbol (three overlapping electron orbit rings) in the center.

The new Silent Majority’s costume was much the same except for a lower-face mask. The new costume lacked the white accessories and trim lines of its predecessor, having only a thin blue belt-line with a black star outlined in white centered in front.

Silent Majority is very laconic. When it is necessary to speak he only does so with a single one-syllable word. He is all business, focusing on his target without any extraneous actions. He does smirk slightly when he outmaneuvers an enemy.

The second Silent Majority spoke in full sentences, but with each word being spoken by a different duplicate. 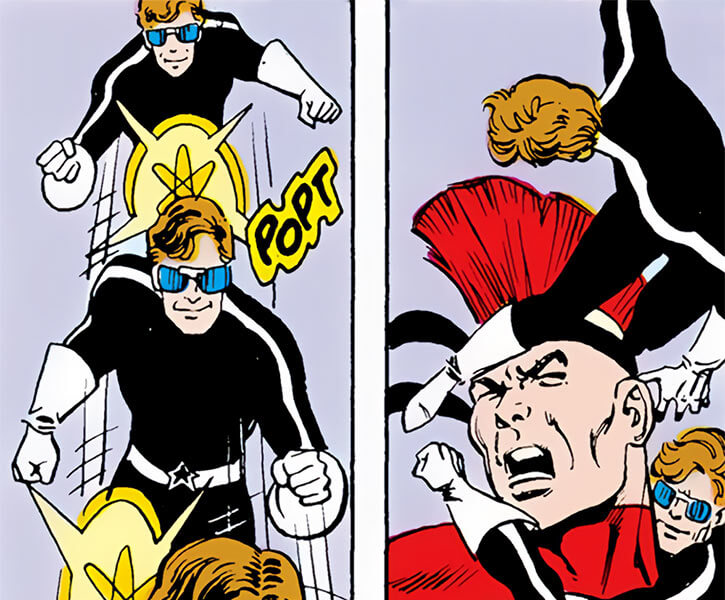 SIA (Speaking only in a single one-syllable word at a time).

This ability (described in the Powers & Abilities section) is represented with the Acrobatics (Athletics) Skill. Silent Majority uses his APs of Skill as the AV/OV versus and OV/RV equal to the intended formation’s complexity. 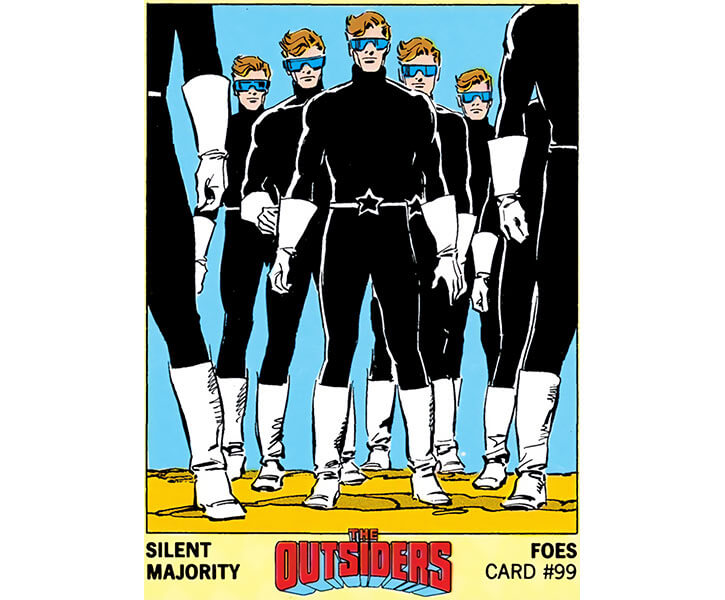 Split ● 130 points ● Descriptor: Unrevealed
– Duplication 11 (Multiple Minions 4)
– Duplication 11 (Multiple Minions 4) Limited 1 (Must have been attacked using radiant energy during this or the previous round), Quirk (Can only engage half as many Ranks of Multiple Minions from this line as the Ranks of radiant energy used to attack him, rounding down), Reaction 2 (requires no Action, and can be used even if unconscious).
– Movement 1. Silent Majority can move in unusual ways by forming human pyramids, human bridges, etc.. This requires an Acrobatics or Athletics roll, base don hom difficult the gymnastics involved are.

He can have 8 minions from his Split Power’s first line, and 8 more if he can use the second line. So, 16.