Zandt was a skilled martial artist and acrobat.

Ursula Zandt was a wealthy Austrian aristocrat. Hitler’s seizure of Austria forced Ursula and her family, as Jews, to flee to the United States, where they quickly blended into the lifestyle of upper-class Manhattan society.

After her parents died in 1938, Ursula developed a sudden “wild” streak. Stories of the first costumed adventurers’ thrilling exploits led her to become one herself.

In 1939, the Silhouette made headlines after exposing a crooked publisher who was trafficking in child pornography. Later that year, she joined the Minutemen after reading an ad for them in the Gazette.

Shortly after World War II, a news reporter managed to uncover the fact that The Silhouette was a lesbian. To preserve the groups reputation (and good PR), the Minutemen expelled Zandt in a move Sally Jupiter, aka the Silk Spectre, would later decry as dishonest and unfair.

She and her lover, suddenly vulnerable, were slain a few weeks later by The Liquidator, an old enemy.

The Silhouette was an attractive woman in her late 20s, with a rather intimidating glare.

Her costume consisted of simple black clothing with a bright red belt. A more elaborate one was used in the movie adaptation for photography ; she was played by Apolónia Váňová.

Although she would seem to have made little effort to hide her identity, she was able to keep it secret even from her closest allies.

Supplementary material indicates that Silhouette had a rebellious and contrary spirit and became a superhero for the kicks, seeing it as a way to express herself.

Being of more noble blood than the rest of her teammates, she apparently didn’t try particularly hard to endear herself to them.

She seems to have been rather catty toward the Silk Spectre, who would later describe Zandt as hard to get along with, and hated the Hooded Justice, due to his public support of Hitler and the Third Reich.

Judging from some of Hollis Mason’s (aka Nite-Owl’s) comments in Under the Hood, she seems to have gotten along with him best out of all her teammates.

To Zandt’s credit, when expelled, she made no effort to expose the relationship between Hooded Justice and Captain Metropolis, in spite of her hatred for the former.

The Comedian: “Why don’t Uncle Sammy get us into Europe, where the action is ?”
Hooded Justice: “Well, firstly, we aren’t at war. Secondly, we should avoid political situations…”
Silhouette (Needling tone): “Perhaps the *Poles* thought so too, eh ? You agree, Sally ?”
Silk Spectre I (Huffily): “Well, I’m sure I wouldn’t know anything about what the Polish people think !”

Silhouette would certainly have joined the All-Star Squadron just as eagerly as she joined the Minutemen. More so, in fact, since it would provide an excuse to beat up Nazis.

Since the DCU press appears in most cases to be far less cycnical and opportunistic than ours, it seems unlikely that her homosexuality would be exposed until after her death (perhaps in a modern retcon ).

She may have been killed by Baron Blitzkrieg after the All-Star squadron broke up, rather than The Liquidator.

Zandt was exposed as a lesbian in the late 40s. Trying to avoid going to prision (homosexuality was a crime, then), she joined senator Tex Thompson’s anti-communist group to gain a pardon, but was highly bitter about it.

When Thompson was exposed publicly as the Ultra-Humanite, Silhouette joined the fight against his superman, Dynaman. She was killed saving John Law, aka Tarantula, who had exposed her as a way to restart his writer and journalist career.

Ursula’s last words: “You don’t deserve it.” made Law forego alcohol and vigilantism.

Although neither module, nor sourcebook, nor comic mention it, it’s possible that Zandt had some Thief skills, as well (it fits the kind of character she seems intended to be).

Source of Character: “Watchmen” Graphic Novel, the “Who Watches the Watchmen” module by Dan Greenberg, the “Watchmen Sourcebook” and “Taking out the Trash” module by Ray Winninger (from which I cribbed most of the History and stats, though I disagreed with a few.) 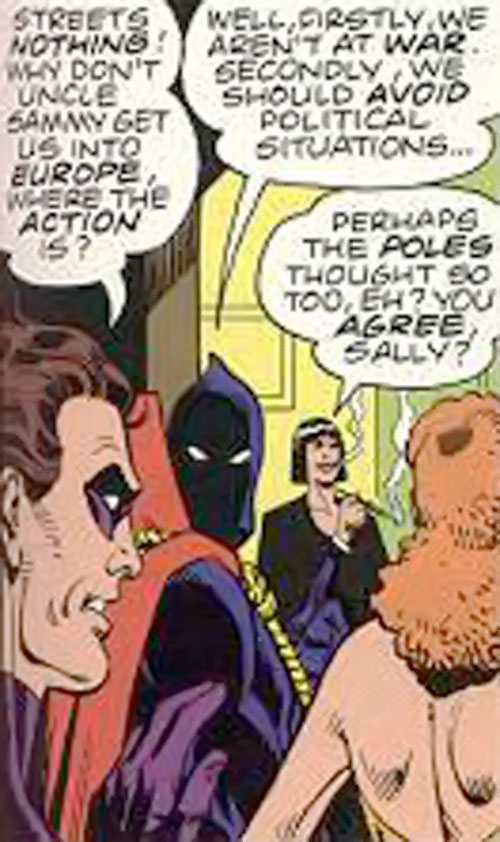