Silver Dagger is a magician, although not a master in any single magic school. He knows a hodge-podge from various schools, he is a disciple of them all. He employs magic from several odd sources for his purposes, as well as powerful artifacts.

Silver Dagger is a bibliophile in the arts of black magic and very cunning, and yet he lacks the experience of a real master.

He also has extensive knowledge of Christian theology. Before assuming the mantle of the Silver Dagger, he obtained a Ph.D. in theology from a Jesuit college.

He is exceptionally charismatic and an almost superhuman public speaker when he’s not merely ranting. His other skills include strategy, tactics and guerilla warfare techniques.

Silver Dagger is in good physical shape, quite fast and strong, and an excellent weapons master with knives, guns or hand-to-hand combat. He seems to use aikido, judo and boxing.

He regularly uses a dangerous, enchanted silver dagger reputed to be able to cleave demons. In DC Heroes RPG terms, he will spend lots of Hero Points  on his first attacks in order to kill the intended target as fast as possible (much like the Scourge of the Underworld).

Isaiah Curwen was a Cardinal at the Vatican and a contender for the Papacy. Despite The Pope’s endorsement, the College of Cardinals did not elect him due to his youth and fanaticism.

Curwen later developed a fascination over the black arts. He came to believe that this was part of a divine plan. His was now to learn the secrets of magic to become God’s personal weapon against Satan – as The Silver Dagger.

Curwen quit the cardinalate to travel the world and study “the dark religions.” He proved to be a student with considerable aptitude. Once a master of magics had taught him everything he could teach, Silver Dagger would execute “The Lord’s vengeance.” Finally, the time came for Silver Dagger to seek out the Sorcerer Supreme.

Isaiah Curwen proved clever enough to enter the Sanctum Sanctorum despite its many spells of protection. In an altercation with Dr. Strange and Clea, Curwen was drawn into Agamotto’s “realm of unreality.” Eventually, Curwen learned to affect events outside of Agamotto’s realm and on the corporal plane. 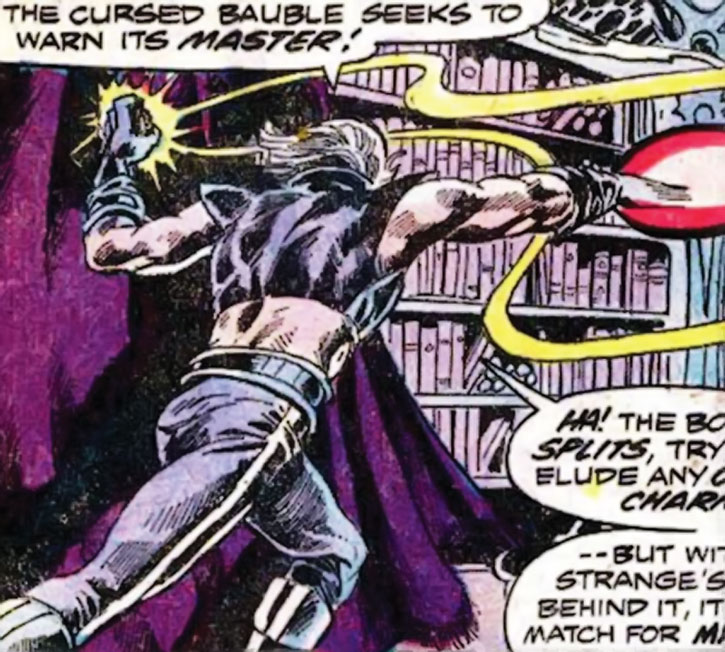 This led to Curwen mystically enslaving Marie Laveau. His goal was to stage a trap for Doctor Strange and allow him to return to Earth. In the end, Marie Laveau became free of Curwen’s spell and stabbed him in the back with his own silver dagger. Doctor Strange, then, returned the mortally wounded Curwen to Agamotto’s pocket dimension to recover.

During his second sentence in Agamotto’s realm, Isaiah Curwen faked the need for penance. Thus, Curwen surrendered his left eye to Agamotto to replace the eye Dr. Strange lost to Ghaszaszah Nyirh, as a means to escape the dimension.

Back on the front

Curwen’s “holy war” took him west, were he found Jack Russell. Isaiah Curwen zealously chased Russell into a forest, alone, at night, armed only with his silver daggers. The two, quite literally, fought tooth and nail until the werewolf fled the scene.

The next night, Curwen returned with his Sword of the Lord, a team of like-minded fanatics, armed with machine guns and silver bullets. They attacked a gang of werewolf bikers called the BrainEaters. At the end of the conflict, Russell, in werewolf form, bit deep into Curwen before he left him.

Curwen and his followers believed that he had now become “tainted,” “unclean.” Thus the Sword of the Lord turned on their leader, but Curwen used his magic powers to subdue his gang.

One night Doctor Strange was alerted to a plan to assassinate seven sorcerers using Curwen’s trademark silver daggers. Attempts were made on:

In a final confrontation, Curwen used sorcery to animate silver daggers to kill Dr. Strange but accidentally stabbed himself.

Silver Dagger is a male in excellent physical shape. He usually wears commando-style banded arms and legs, a pair of tight-fitting trousers and a sleeve-less shirt or linen. He keeps stuff in a belt with pouches.

His muscular chest is often bare and he can be seen intensively staring at his opponent with the silver dagger in his hand.

In the eyes of Curwen every magic user is a twisted, evil demon that has to either be slayed or renounce their wicked ways. He, himself, is personally using the wile and unholy arts to rid the world of a greater evil. Although he is using abominable magic he is a saved soul due to his actions against the magicians.

He considers himself a righteous and holy warrior of the Lord. Every magic user and all magic have to be destroyed before he can rest. He is utterly ruthless in his crusade and if innocents gets hurt in his war, then so be it.

Yet, he believes that a few magic users are not beyond saving and those he will capture, chain to the wall, hypnotize and brainwash until they are cleansed and reborn in fundamental religion. Curwen has a powerful, intense personality that is not to be denied and many have fallen before his cleansing.

Curwen used to be an energetic and quite fanatic servant of the Catholic Church, until the papal crown was given to another. He then understood the power of the devil, and having missed his goal, he studied, with morbid curiosity, the black arts in the library to know his enemy.

He realized that God had a higher task in mind for him, and so he read books filled with what he considered filth and cast his first spell after seven intense days of reading. Intent on being the chosen one to rid the world of magic he resigned his post and traveled the world learning from all dark magic schools in order to be able to fight magicians on their own terms.

Yet, Curwen does not believe in the dark gods whose power he summons. He thinks magic is no more than obscure phrases and arcane gestures, recipes to be read. His old beliefs come forth to the surface at times, even while dabbling in spells, and he does believe in miracles.

He is now quite insane, after having read the Darkhold in the form of the Shiatra Book of the Damned, and will rave and rant like a madman at times. One can only wonder if he craves vengeance for the Lord of for himself.

“The name is Silver Dagger, girl. He whose mystical mesmerism makes your will my will… instantly !”

“A silver dagger is the traditional destroyer of demons (so say the books I’ve read), and the books, as always, are correct ! Whatever demon dwelt here is as dead as the demon sorcerer you served !”

“Rejoice, ye children of the Lord, for the hour of righteous retribution is at hand ! Silver Dagger has returned !”

“Lord knows I loathe traversing in magic, seeking out its abominable rituals and jaded devotees, but to save one such as yourself, I accept my calling !”

His origin might stay intact as it is and he would have clashed with most major sorcerers of the DC Universe. The Silver Dagger artifact is probably of Egyptian origin, and the Eye might be related to the Eye of Horus.

(See our Guide to Marvel Magic for more about this).

“There is more to the study of mysticism and the occult than most people might even dream! In the mystic order to which I belong, it is indeed written that practitioners of the mystical arts must choose a disciple or disciples, to insure the continuity of the struggles against malefic forces, but only at such a time that it is fitting and proper!”
-Doctor Strange, Sorcerer Supreme of the Earth Dimension.

The Magic Rank Advantage is a measure of the Character’s status within the mystical community. Although it is very unlikely that Silver Dagger would acknowledge and follow this system, he is himself ranked according to it; people call him a Disciple, but he is actually a full Adept of Eclectic Magic.

The character’s rank determines what abilities he may possess. A member of a lower Rank will usually heed a member of a higher Magic Rank, unless they are a member of an opposing school. To defeat an opponent of another school is considered glorious, particularly if the school opposes the character’s own and the opponent is of higher rank.

In the Marvel Universe, a character will, by experience, upgrade a Ritual into a full Mystic Power (which are always mystic linked). If using the rules below free slots for powers or rituals may be created by upgrading a ritual or downgrading a power into a ritual. When getting permission to increase Magic Rank to the next level the full cost has to be paid.

The Adept spends more time adventuring than he spends with his master, though he is still at his master’s beck and call.

Mystic Entity Connections (Equal to a Powerful Connection plus 5 HPs for every two Powers listed)
The benefits of invoking entities fall into two categories. The first is an AP boost for Powers. If a Power is used while invoking the appropriate entity, a Low Connection garners a +1AP to the Power, while a High Connection gets + 2APs.

If Sorcery is being used to mimic the Power in question, calculate any Mystical Bashing Damage by the APs of the Power BEFORE the boost.

Silver Dagger has Connections to the following two mystic entities: 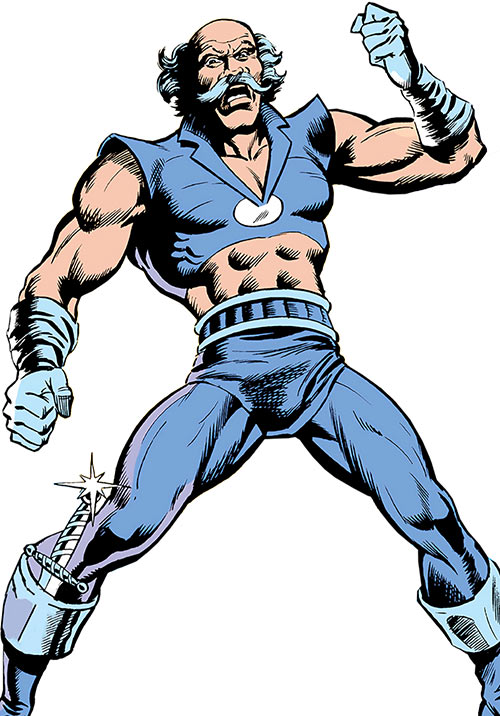 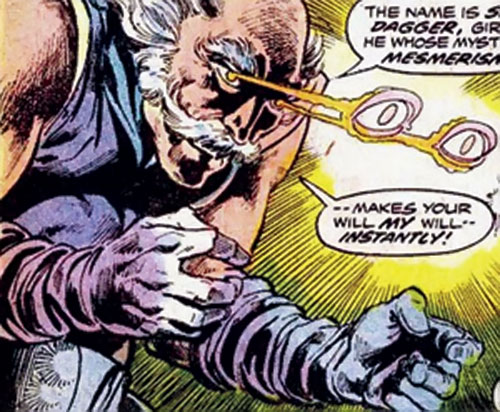 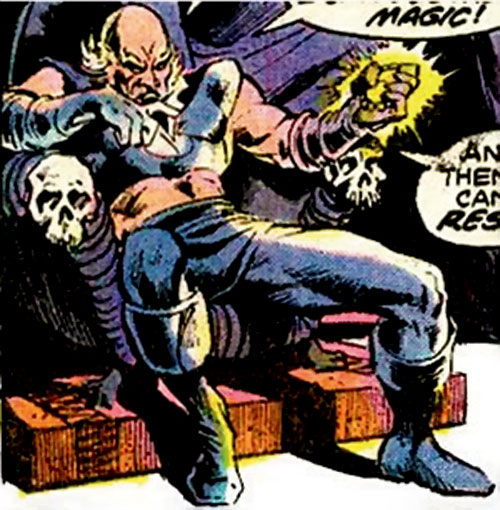 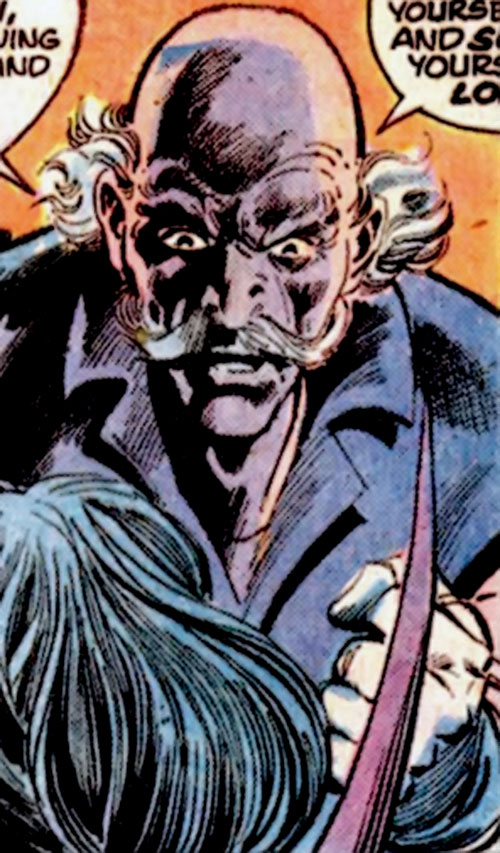 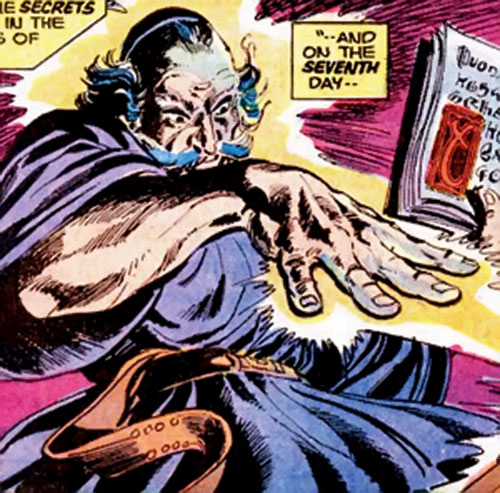