Silver Deer is a trained sorceress, martial artist and terrorist.

She’s smart, reasonably competent in the field, and highly motivated.

However she is also a fanatic, which hampers her social skills.

Her demonstrated magic powers are :

She also used alcohol-soluble drugs. One was a basic mickey finn. The other transfixed drinkers and make them hallucinate that they were in the countryside, chased by white-furred animals. They remained unresponsive during the hallucinations, though fainting might occur.

Chanka and her twin Bobby were born on a Cherokee  rez in North Carolina.

Their grandfather was a magician, as the family had taught spells to their eldest son for generations. Chanka wanted to learn, but as a girl she was not eligible.

When they were kids, Bobby was bitten by a rattler. The rez’s dispensary didn’t have the proper antivenom. Thus, Chanka and her father rushed to the nearest city hospital.

However, as they barged in they were stopped by racist staff. Bobby’s father shoved back an interfering nurse to gain access to the ER. But a racist security guard responded by shooting him and his son dead.

Since she was the last descendant of the family, her grandfather eventually agreed to teach her his spells. That included magic such as turning into a silver-furred wolverine.

From the get-go, Chanka intended to turn these into weapons against the White Man in revenge.

In 1984, Silver Deer set out to reactivate Black Bison. Meaning the spirit of superhuman chief and shaman Black-Cloud-In-The-Morning possessing his descendant, John Ravenhair. 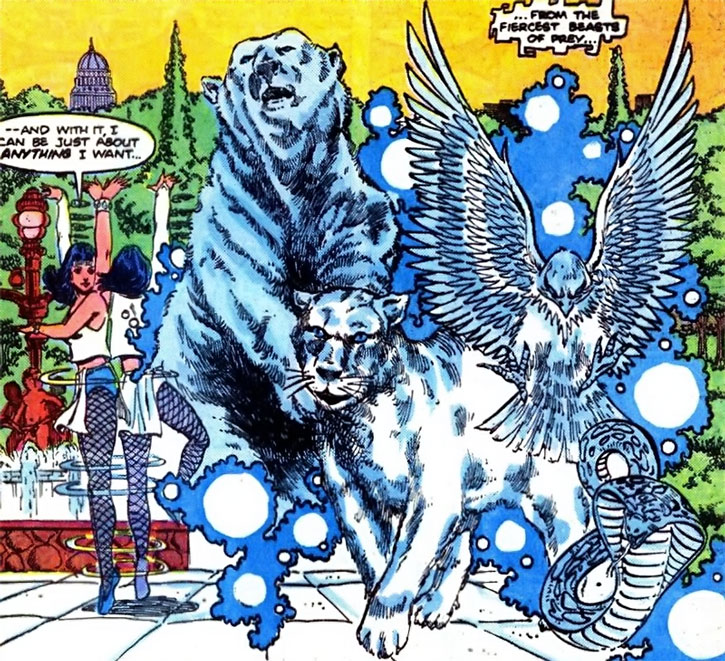 She tracked down and recovered Black Bison’s talisman. It had been lost in a fight with Firestorm. Then Chanka tricked Ravenhair into being possessed by Black-Cloud again.

Firestorm intervened, but they repeatedly repelled him.

Silver Deer’s big plan revolved around a gambling event she had the Soviet embassy set up in Washington, D.C.. She had presumably using her mesmerism to have this occur.

The political elite of the capital was to attend the event in large numbers. Then, Silver Deer would use her mystical power over games of chance to take control of their minds. First she would have them return their lands to the Native nations, then she’d force them to kill themselves.

Firestorm (Stein/Raymond) and Firehawk (Lorraine Reilly) intervened in the nick of time. Firehawk engaged the shape-shifting Silver Deer in battle. Both women were trapped under a collapsing building, and only Lorraine flew out.

Silver Deer is an eeeevil witch.

She lives in a world that is part generic-Native mythology (she’s always talking about animal spirits and magical traditions), and part shadow world of espionage where all enemies of America jointly plot the downfall of Freedom.

She is an homicidal radical and fanatic who despises the White Man. Chanka fights for the blood-soaked return of a magical past — “magical” both in a metaphorical and literal sense. She’ll unhesitatingly eliminates witnesses, or just people she doesn’t like.

Though she felt contempt for John Ravenhair (who had little connection to his heritage), she was very attracted toward Black Bison. Bison was a magically and physically powerful man from the past who largely shared her views.

Objectively, Silver Deer didn’t need to ally with Black Bison for her plan. But she wanted him around so they could have sex and build a relationship.

“My father was thunder, my mother was the wind, and I am the daughter of Coyote, the trickster.”

“I am Deer Woman, Bringer-of-Death, strange shape in the night, trickster of the morning.”

Drawbacks:
SIA toward Serving her Cause. 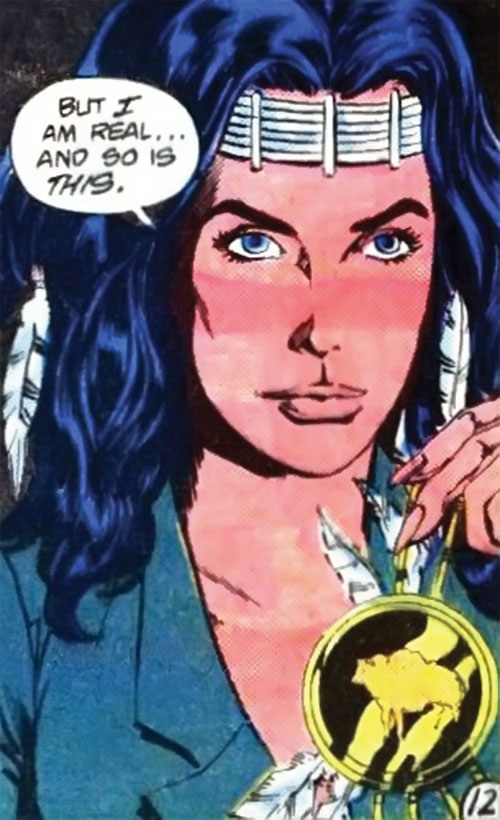