Silver Sable International is a mercenary corporation in the Marvel Universe. It is essential to the character of Silver Sablinova, and to the fictional country of Symkaria.

This profile is being built gradually as the new Silver Sable research progresses. Right now it stops just before her 1992 series begins.

Purpose :
The Wild Pack was founded to hunt down Nazi war criminals, and particularly those who had been active in Symkaria. It was eventually repurposed as a for-profit corporation specialising in big-ticket bounty hunting and security.

Extent of operations :
Global, but centred on Symkaria and the United States of America (the latter by virtue of being the largest market for SSI).

Relationship to conventional authorities :
SSI is a respected security corporation and will generally benefit from the cooperation of law enforcement authorities.

SSI seems to be an hybrid private sector/public sector organisation. While for-profit it also runs a number of state functions for Symkaria such as royal security and at least part of the counterintelligence and security work, and it seems very unlikely that SSI to bill its normal rates for these.

The Symkarian government also seems to acts as shareholders and/or a supervisory board for SSI, with Sable likely having a CEO-like role. The money that SSI brings to Symkaria seems to be more important than simple taxes, and the company seems to pay hefty dividends to the state.

Base of operations:
Headquarters in Aniana, the capital of Symkaria. US operations are generally conducted from the Symkarian embassy in Manhattan (on the East 53rd Street). Said embassy includes full SSI training and planning facilities.

Number of active members :
Unrevealed. The number of Wild Pack field operatives seldom seems to be above 20 or 25 tactical operators worldwide. Less if casualties have recently been suffered, more if a cohort of recruits have just been hired for a trial contract. There might be about the same number of plainclothes intelligence agents, who support the field team via surveillance and the like.

Number of reserve members :
SSI seems to be able to drawn both from the Symkarian military and the mercenary world for recruits to evaluate.

Organizational structure :
Silver Sable herself seems to have CEO-like role, with the Symkarian monarchy acting as a sort of supervisory board.

Sable’s second-in-command is her uncle Morty, who tends to do general management whilst Sable focuses on operations and operations planning. Mortimer is one of the old timers who disapprove of the changes between Silver Sable and her father when it comes to the Wild Pack’s purpose. Yet he remains indispensable in running his niece’s business smoothly.

Apparently, the three main divisions are the administrative and support/technical staff, the tactical force (the Wild Pack) and the intelligence and research/analysis service. The latter seems fairly good at obtaining useful data about their opponents and their activities.

Known officers :
Silver Sable seems to be the head of tactical operations, whilst her uncle seems to run the other two divisions under her delegated authority. 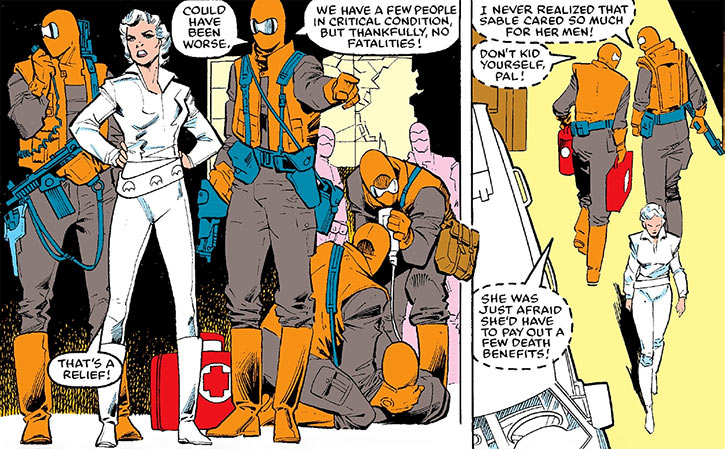 Known special agents :
SSI will frequently retain the services of superhuman and/or costumed adventurers on a per-job or per-day basis, and they pay well. Such hires have included :

Known teams :
Several of these agents, who share a shady background on the wrong side of the law, occasionally operate as a team called the Outlaws. It is often led by Silver Sable. Sandman, Paladin, Prowler, Will O’ the Wisp and Rocket Racer have been Outlaws members at various times.

Membership requirements :
Tactical operators are personally hired and fired by Silver Sable, chiefly on the basis of efficiency and professionalism. Wild Pack operators are apparently all fluent in English. This seems to be a result of opening recruitment with the creation of Silver Sable International, as operations taking place before that were in Symkarian.

Standard operative :
The tactical operators of the Wild Pack are competent fighters. In DC Heroes RPG terms, use the stats for a stock shock trooper. They are particularly trained in SWAT-like urban operations and firearms operation. They will generally overcome conventional forces unless they are significantly outnumbered or caught in a trap.

Though they are hand-picked and intensively trained, the Wild Pack operators remain faceless troops. As such, they are unlikely to achieve much against named fighters, let alone superhumans. They are very professional and determined, though. 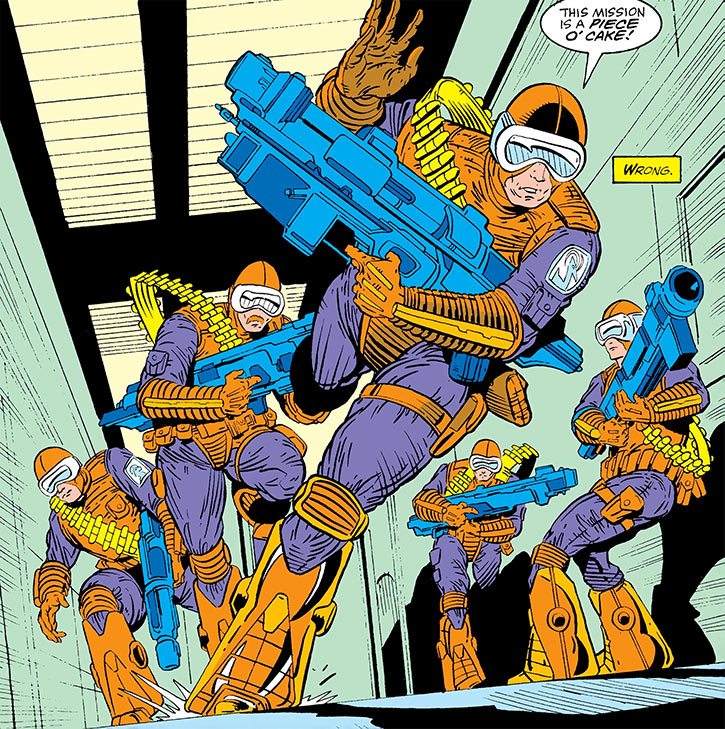 Resources :
Silver Sable International is a successful corporation with a lot of cash to conduct its operations. It can afford high-end recruitment, training and gear and will routinely buy away problems by compensating for material damage inflicted during operations.

Equipment :
The Wild Pack’s visored uniforms appear to be lightly armoured. Their futuristic-looking firearms are loaded with non-lethal comic book “mercy bullets” on most missions. Later on they were depicted as using concussive energy weaponry with the same game stats. This is because their mission usually involves taking their opponent alive for the best reward.

In an urban context, the Pack usually operates vans that are presumably modified SWAT-style. These include handles and platforms for six to eight operators to hold onto on the sides of the van so they can embark and disembark very quickly.

They have an ample budget for vehicles, and their stock includes the likes of light helicopters, motorboats, flying three-man platforms with an energy cannon, skycycles, high-tech disposable four-man gliders, etc.. They occasionally deploy energy weapons such as microwave heavy rifles, electro-whips, laser pistols and the like.

Wild Pack uniforms include nose filters, but they are not worn as part of normal operations. Presumably it’s too difficult to breathe correctly with those on. They must be manually inserted into the uniform’s mask.

In DC Heroes RPG terms the Wild Pack uniforms probably have Blunting: 04 and Shade: 02. When they deploy energy weaponry, it presumably has 6 APs of power, or 7 if it’s unusually large (“presumably” since they never hit named targets). Crew-operated or vehicle-mounted cannons probably have 8 APs.

Silver Sable International and the Wild Pack are an emanation of the tiny Eastern European country of Symkaria (population 1.5M, capital Aniana). Symkaria is landlocked in the Northern Balkans and shares borders with Serbia, Latveria and Transylvania.

In the real world it would be in Southwestern Romania. Marvel Universe Romania and Bulgaria are significantly smaller due to the existence of countries such as Symkaria, Latveria, Belgriun, Transia and Transylvania.

Symkaria has a proud tradition of resistance to foreign assimilation. This was often done in collaboration with its traditional ally Latveria. The locals are reputedly a cold and hard people.

During the XXth century Symkarian partisans prevented the full occupation of their country by the Third Reich, albeit at great cost. During the Cold War, Symkaria and Latveria formed a sort of bubble free from Soviet domination, though one assumes that it was chiefly a product of Latverian might.

The horrors wrought by the Nazis against the Symkarian population prompted the creation of an organisation called the Wild Pack right after the war. Intelligence minister Ernst Sablinova ran the Wild Pack with the help of his brother Fritz. This organisation became reputed for its discipline, commitment and paramilitary skill. It was the flower of the long Symkarian martial tradition.

Sablinova’s fame as a Nazi hunter also resulted in an alliance with the V-Battalion, another post-war anti-Nazi organisation.

(It is important to note that post-war international Nazi presence was much larger in the Marvel Universe than in the real world. Meaning that the job of Nazi hunters was much bigger and way more dangerous. The difference can reasonably be explained by the post-war preparations of men such as Baron Strucker, the Red Skull and Baron Zemo.
Strucker, in particular, had information from the future about the fall of the Reich and access to alien resources. This allowed him to build an enormous power base that eventually became HYDRA.) 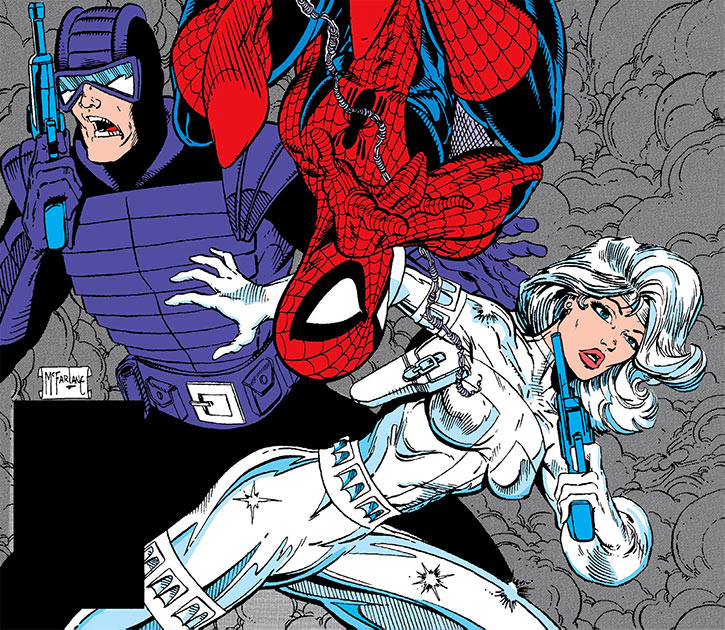 Ernst Sablinova’s daughter Silver eventually joined the Wild Pack. After the apparent death of her father at the hand of Nazi war criminal Ivan Trefkov, a young Silver became the new leader of the Pack.

As war criminals became rarer, the Wild Pack gradually lost its reason to exist. But Sablinova created a structure called Silver Sable International and repurposed the Wild Pack into SSI’s tactical assets. Their services were sold as mercenaries.

This setup was chiefly intended to create a source of foreign income for tiny Symkaria. Its economy would otherwise have been worse than nearby Romania’s. This change presumably took place circa 1980. 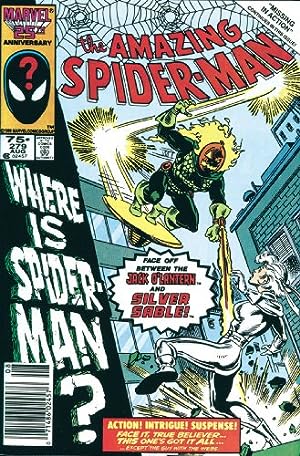 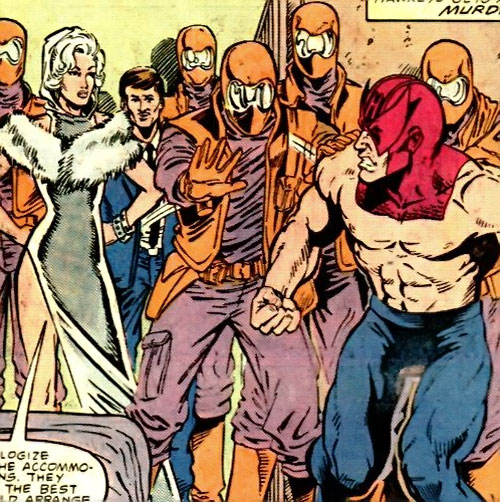