After he was ritually sacrificed by Hath-Seth’s reincarnation, the Silver Scarab became a metallic, inhuman being with a stylised scarab face/mask.

He was an animated, hollow suit of Nth metal armour.

It was strong enough to overpower the Fury, and to survive her strongest blows without apparent permanent damage.

The entity had many abilities similar to that of the old Silver Scarab suit, though it is unclear whether those were mystical or the product of technology built into the suit.

Perhaps the most puzzling aspect of Hector Hall’s 1980s career is whether he had a soul. We’ll review the arguments for and against it.

Thus a possible, *hypothetical* scenario is that Hector was born with a soul, but it was immediately suppressed and almost digested by the Hath-Seth curse. Fatherhood reinforced this soul for mystical reasons, and it was eventually able to pry itself from the sentient curse.

The fact that Hall had to be ritually sacrificed would lend credence to that explanation. *Something* had to be shed to free the Silver Scarab curse. And it is unlikely that it was merely Hall’s physical body.

Hector Hall was dead. All that was left was a cold, cruel entity calling itself the Silver Scarab.

It cruelly rejected Lyta Trevor during a brief rendezvous, telling her that he had never loved her and flying away. The Scarab then sent a two-words resignation to Infinity, Inc.. From there it worked on summoning beast-men fighters to guard the transformed Hall Manor.

Lyta Hall came to investigate the Manor. Alarmed by what she found, she discovered the corpse of Hector. Worse, the body was but an empty shell that crumbled into dust.

She was then captured by the Silver Scarab and the reincarnated Hath-Set. The latter was now using the identity of “Dr. Helen Rock”.

Moving on the next phase of her plan, “Dr. Rock” hired half of Infinity, Inc. to excavate an ancient pyramid in Egypt. Once the small monument was unearthed “Dr. Rock” gained access to the Eye of Ra. This was a powerful artefact that she had used in her previous incarnation, as Dr. Anton Hastor.

With the Eye, “Dr. Rock” took out the Infinitors and their aircraft. Then she flew back to Hall Manor.

However, by that point Northwind had realised that the Thoth prophecy had been correctly interpreted after all. It was his friend Hector who was the soulless vessel of evil.

Northwind and much of Infinity, Inc. stormed Hall Manor. While the other Infinitors fought the man-beasts, Northwind engaged Silver Scarab. He did so using powerful spells he had learned for this specific task.

The Infinitors were successful. But the reincarnated Hath-Set then burst into the pyramid within Hall Manor, wielding the Eye of Ra.

A sliver of soul

Though things were not looking good for the heroes, there was grit in the gear. The Silver Scarab was not entirely devoid of humanity – there was some sort of soul sliver in there. This sliver prevented the Silver Scarab entity and the Eye of Ra of working as planned.

The Eye clung to the armour until it was white-hot and fell to the ground, leaving yet another hollow shell. Northwind then cast a spell that put the Eye of Ra to sleep. That left “Dr. Helen Rock” without her master weapons. Still, she escaped.

Infinity, Inc. later buried the remains of Hector Hall. Unbeknownst to them, “Dr. Rock” sneaked into the graveyard. She threw a small, silvery scarab onto the grave.

However, one tiny detail was wrong.

Please give her my message, tell her of my plea

During the last minutes of the battle between the silver Scarab, Hath-Set and Infinity, Inc., something had fought the Silver Scarab from within. That had played a critical role in making the spell fizzle.

This new entity was had Hector Hall’s consciousness and memories. It seemed very much akin to the soul that he never was supposed to have. It seems that this little soul sliver appeared when Lyta Trevor became pregnant.

The soul sliver was robust enough to partially transmigrate. Due to the importance of dreams in the ancient Egyptian beliefs, it apparently washed ashore on the fringes of the Dreaming – the dimension  of dreams.

All that was awaiting was another machination, however.

The Silver Scarab entity was cold, cruel and determined to accomplish its evil destiny.

Bonuses and Limitations:
Magic blast can only be used against an attacker trying to affect the Silver Scarab’s nonexistent soul.

Advantages:
Expertise (Nth metal, Solar power, Microbiology), Familiarity (Astronomy), Headquarters (Expansive – Hall Manor, after the disappearance of the JSA), Leadership, Misc.: Hall doesn’t have a soul, which may make him immune to some (usually mystical) attacks and procedures. He also quite likely had full Life Support.

Since it wasn’t since seen much, the stats are tentative. 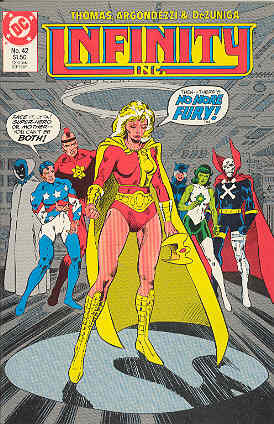