Silver Slasher’s metallic skin protects her from harm. It also allows her to go without breathing for long periods of time (in DC Heroes RPG terms BODY, Sealed Systems).

Her silvery fingernails and toenails (and teeth, presumably) can slash through almost any form of matter (Claws, Sharpness).

She is a quick and dangerous hand-to-hand combatant (DEX, Lightning Reflexes). Her nearly frictionless skin allows her to spin at high velocity for a devastating attack (Buzz Saw Spin Shtick).

The Silver Slasher is a skilled hand-to-hand combatant (Martial Artist), and has enough familiarity with space travel to operate freely in EVA (Vehicles/Space). She makes use of LSV equipment which allows her to fly, breathe, and communicate in space.

Ki-Lan was once a normal girl from the planet Korlon. That was the name given the planet by the 30th century human colonists; the native silicon beings called their planet Dryad. She was one of five human children who were rescued from their dying planet by the telepathic vampire known as the Dark Man.

These five children, along with one of the native silicon creatures, were convinced by the Dark Man that the Legion of Super-Heroes was responsible for the destruction of their home planet. He instilled in them a pathological hatred of the six Legion members present during the planet’s final days.

In reality, Phantom Girl, Ultra Boy, Colossal Boy, Timber Wolf, Light Lass, and Superboy were on Dryad assisting with the evacuation of the colonists.

Nevertheless, Ki-Lan and her fellows, all young and frightened, were vulnerable to the Dark Man’s telepathic conditioning. This process seems to have permanently warped their minds to some extent. Granting the humans superpowers and convincing them and the silicon creature, Blok, that they were all family, he forged them into a league of super-powered assassins.

Ki-Lan became the Silver Slasher, her skin replaced with a silvery shell hard as steel. The other human members of the League were Lazon, Neutrax, Mist Master, and Titania, who may or may not be Ki-Lan’s sister. The Dark Man sent them to Earth to attack the Legionnaires. 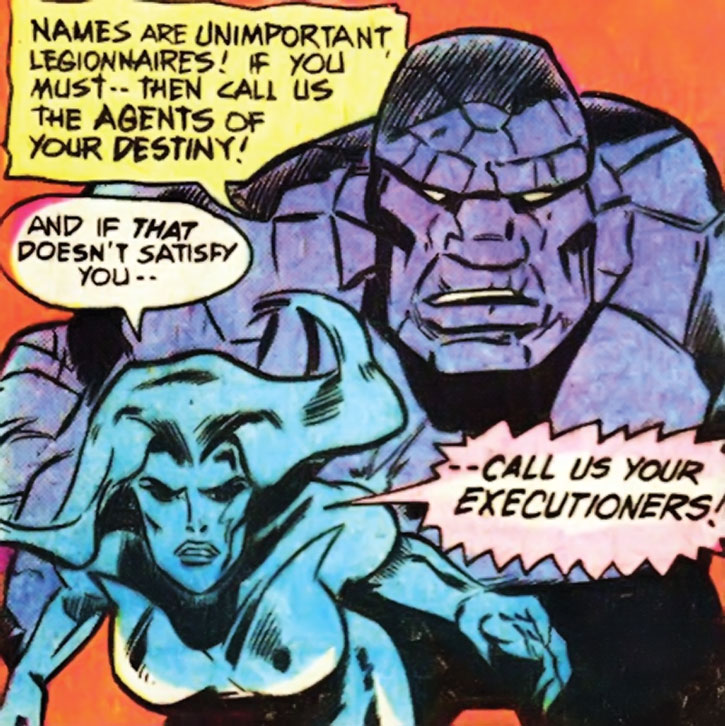 In early 2983 A.D. the Super-Assassins attacked the Legionnaires from ambush, nearly killing them all. The Slasher and Blok attacked Timber Wolf and Light Lass and defeated them. However, Superboy foiled them by activating an anesthetic in the Legionnaires’ blood. That made them seem dead before the Assassins could actually kill them.

Alerted to their plot, Brainiac 5 and the Legion of Substitute Heroes turned the tables and ambushed the assassins, defeating them soundly.

The Super-Assassins were originally imprisoned on Earth. Later that year the Legion contacted them seeking help in defeating their former master, the Dark Man. Only Blok cooperated; the other five remained in prison.

In 2985 they were teleported away by Zymyr of the Legion of Super-Villains to join that group. The League of Super-Assassins never again acted as its own independent group.

After the defeat of the LSV, the Silver Slasher was imprisoned on Takron-Galtos. She remained there only a short time before that planet had to be evacuated during the Crisis on Infinite Earths, in 2986. During the evacuation she participated in a mass escape attempt of a prison shuttle, but the Legion of Super-Heroes thwarted them.

The Silver Slasher looks like a woman made of metal. Her skin is silvery and smooth and even her hair looks more like metal sculpted to give the appearance hair than actual hair. She is a silvery or dull gray color, and originally wore nothing much in the way of clothing, just the appearance of a jumpsuit the same color and substance as her skin.

In later appearances her fingernails are noticeably elongated, looking more like talons – and she appears to wear a sort of headdress or tiara.

Silver Slasher is confident in her abilities to the point of arrogance. She is sure that her metallic body will protect her from harm, and that nothing can stand up to her claws. She is contemptuous of fear and weakness in others, and will let nothing keep her from her vengeance on the Legionnaires.

She is not only willing, but eager to kill the Legionnaires, and like most of the Super-Assassins holds a special hatred for Blok. Despite her viciousness in battle, the Silver Slasher is not completely depraved. She showed revulsion and shock when Sun Emperor casually incinerated an innocent woman.

“The lovely Phantom Girl ! How lovely will you be, I wonder, once you’ve felt my silvery caress ?”

“Isn’t this what we’ve all lived for, these past few agonized years ? For revenge ? I, for one, plan to enjoy my vengeance.”

“Thanks to these Legionnaires, you’ve become a hideous monster ! And I – I’ve become a Silver Slasher !”

“Call us your executioners !”

“How noble, Timber Wolf ! A pity your nobility is misplaced ! You are as helpless against us as the girl – for not even your speed and bestial skill can protect you from the Silver Slasher !”

“Titania and Neutrax were weak, Mist Master ! They let fire and ice frighten them – but what can frighten us ? No ice wall can stand against the Silver Slasher, and as for a few flames – what are flames to a body of tempered steel ?”

“Perhaps you will be the first to die, Dream Girl – at the hands of the Silver Slasher !”

“I want my revenge on the Legionnaires ! I claim Blok for mine, as he was traitor to our Assassins’ League !”

The Silver Slasher and her fellow members of the League of Super-Assassins were based in the pre-Zero Hour 30th century of the DCU, but they could easily fit anywhere. Just pick a criminal mastermind from your campaign who could empower them and make them believe that your PCs are responsible for some tragedy that befell them, and set them loose.

Equipment:
The Silver Slasher has access to anti-grav flight tech and to transuits and communication gear for EVA, just like all the LSVers. See the LSH Equipment writeup for details.

The Silver Slasher has an unusual Shtick which takes advantage of her Claws and her smooth, low-friction skin. By paying a 10 HP fee and forfeiting her Automatic Actions for that phase, she can execute a spinning Claws attack on one (and only one) opponent at her normal AV 10/EV 08, but the opponent’s RV suffers a -2 CS.

This RV penalty is cumulative with the Slasher’s APs of Sharpness (Claws). First subtract the APs of Sharpness from the RV, then apply the -2 CS penalty. Basically she‘ getting the benefit of a Critical Blow without suffering the AV penalty.

To execute the spinning attack, she stands on her toes, claws digging into the ground, and spins in place at incredible velocity with her arms outstretched, metallic fingernails cutting and slashing. Thus, to use the Shtick she must be standing on solid ground.

The Shtick requires the focusing of all the Silver Slasher‘ energies and concentration. As such, she can take no other actions during the Phase in which she executes the Buzz Saw Spin. Her Automatic Actions, including movement, are forfeit, so she must have closed to hand-to-hand range in a previous Phase.

She must also, as mentioned above, pay a 10 HP fee – this fee is paid immediately when the Silver Slasher declares her actions at the beginning of the phase.

More about the spin

This commits her to the Spin. She can’t suddenly decide not to spin and execute a Dodge or any other defensive maneuver. If she decides to declare the Buzz Saw Spin attack, she commits all her energies to it and MUST execute it when it’s her turn to act. Even if the object of the attack moves out of the way before she can strike.

The only way she can not execute the attack once declared is if she is Stunned, Knocked Back, or knocked unconscious first. Note that the Slasher still receives her full OV vs. attacks in that round, as her blurring, blinding spin confuses the eye and is difficult to draw a bead on.

Because her Claws are flying around her at high velocity, anybody (other than the target of her focused assault) within her armspan (a circle approximately 6 feet across) is liable to suffer a Claws attack as well. This is collateral, incidental damage.

This is akin to a Claws Being sort of power, in that AV/EV are equal to APs of Claws, or 08/08. Sharpness still applies, but that doesn’t affect AV or EV. It lowers the opponent’s RV.

During the League of Super-Assassins’ first attack on the LSH, Silver Slasher did not have access to LSV equipment, but she did have 50 HPs. She had a CIH of Superboy, Ultra Boy, Phantom Girl, Colossal Boy, Timber Wolf, and Light Lass.

That was later replaced by her SIH of the LSH as a whole.

Source of Character: DCU (Pre-Crisis and Preboot Legion of Super-Heroes). 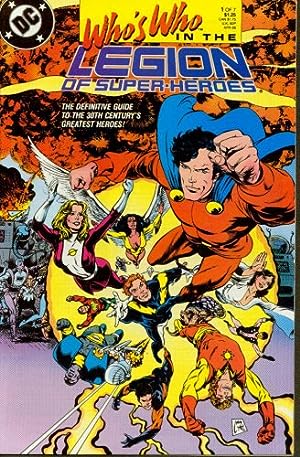 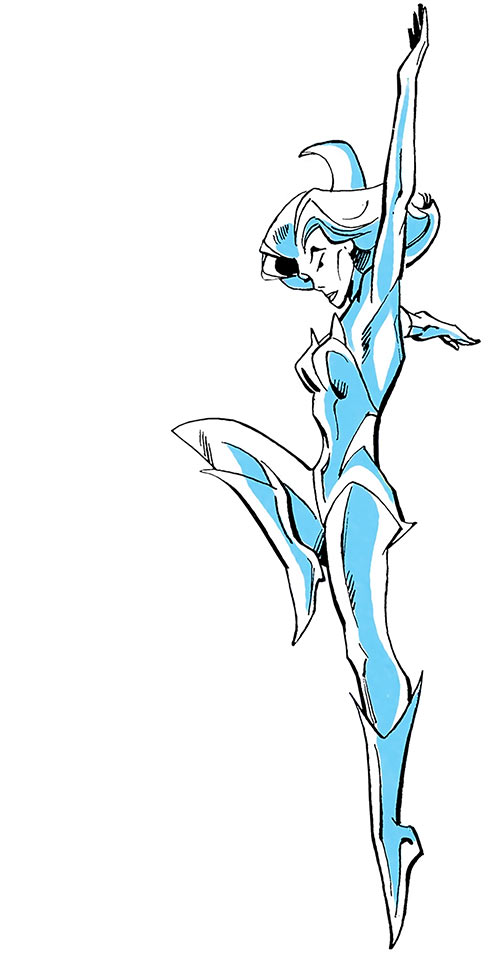 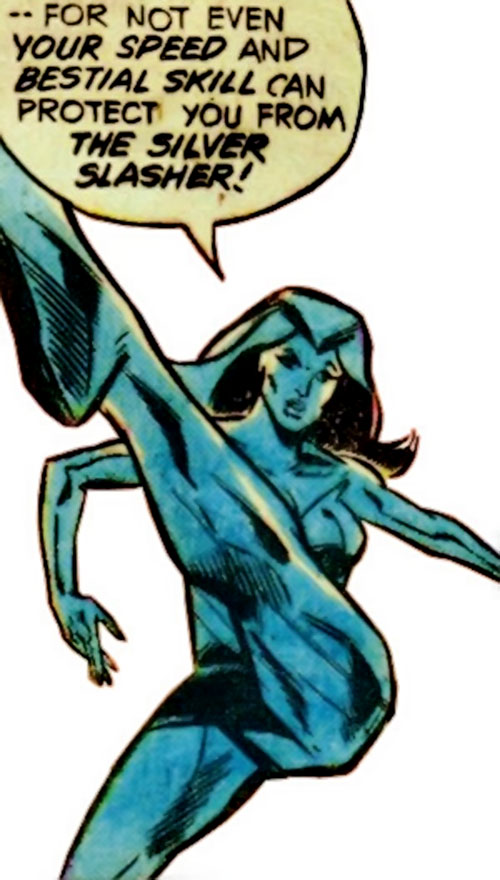 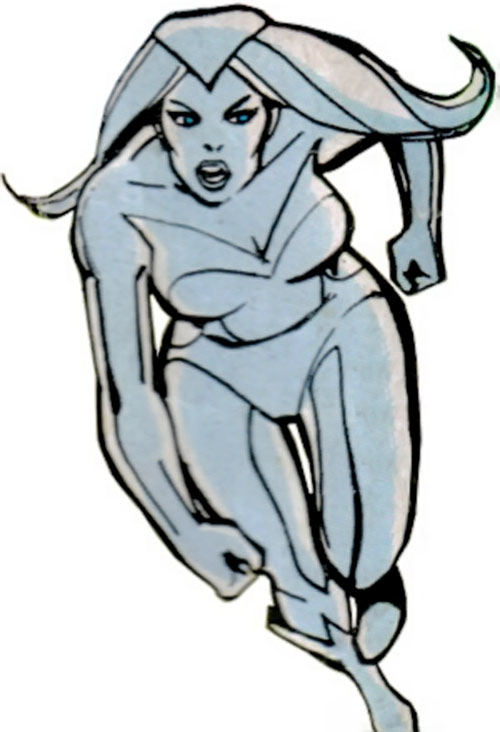 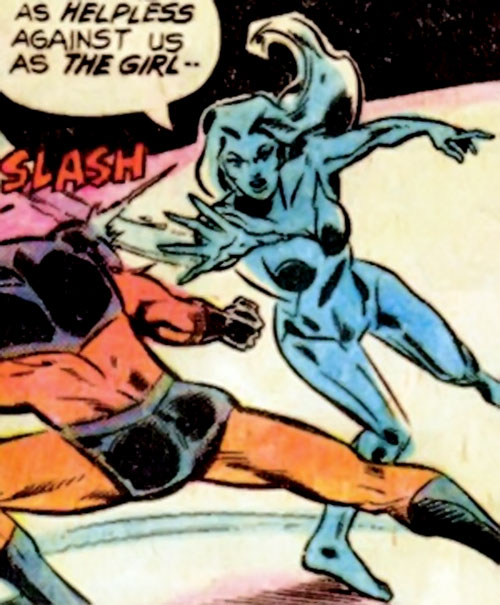 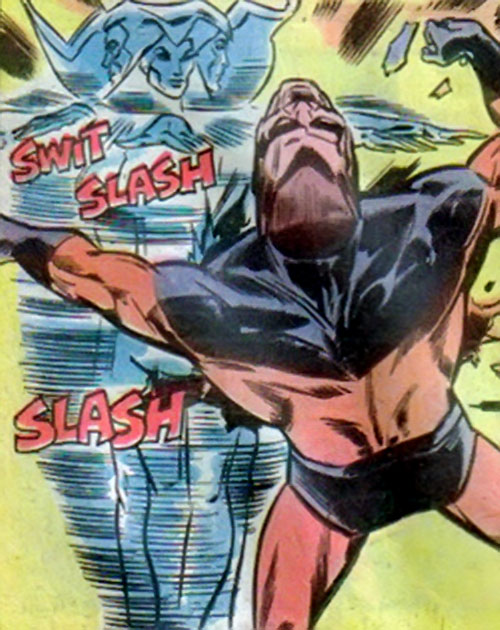